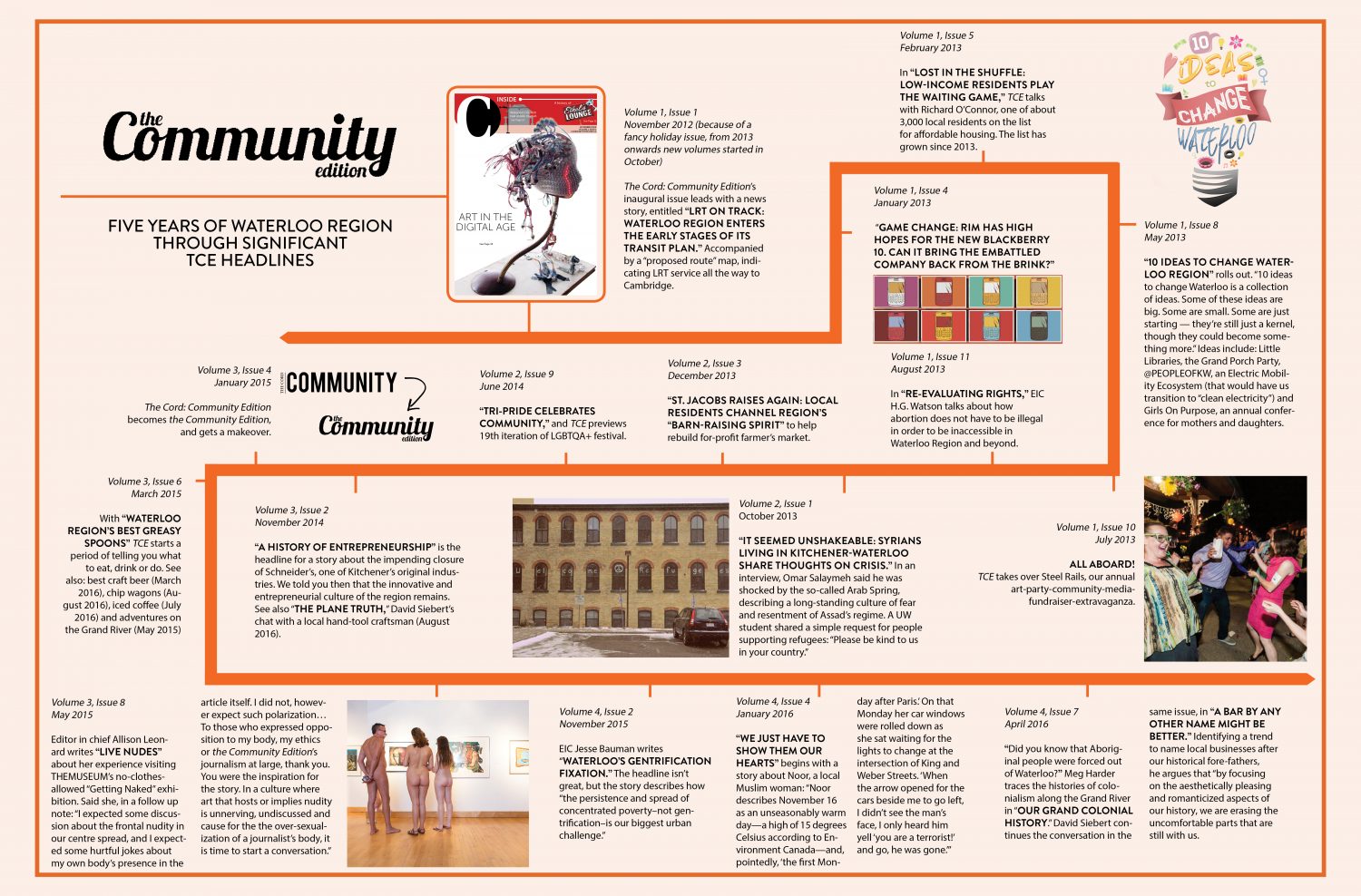 The Community Edition: 5 years of news 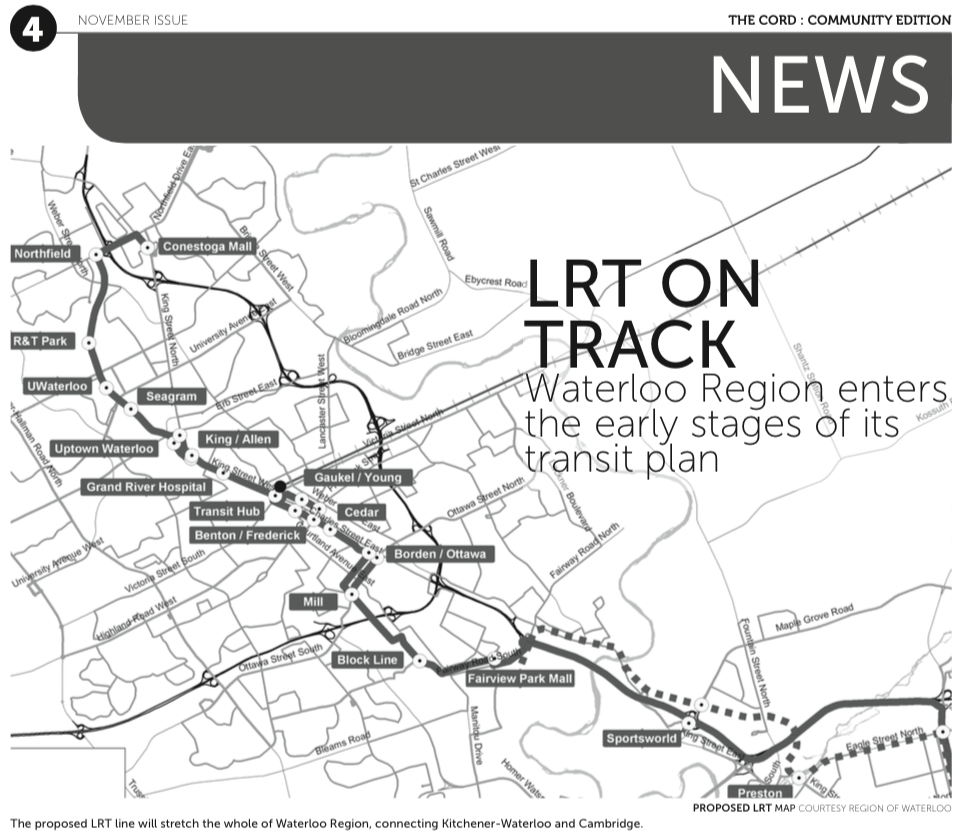 Volume 1, Issue 1
November 2012 (because of a fancy holiday issue, from 2013 onwards new volumes started in October)

The Cord: Community Edition’s inaugural issue leads with a news story, entitled “LRT ON TRACK: Waterloo Region Enters the Early Stages of its Transit Plan.” Accompanied by a “proposed route” map, indicating LRT service all the way to Cambridge. 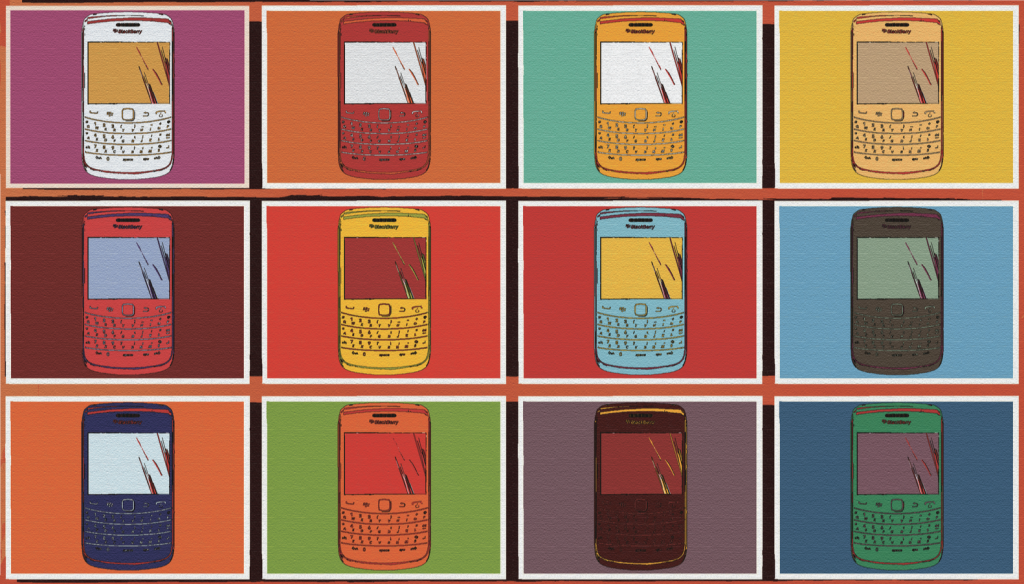 Volume 1, Issue 4
January 2013
“GAME CHANGE: RIM has high hopes for the new BlackBerry 10. Can it bring the embattled company back from the brink?” 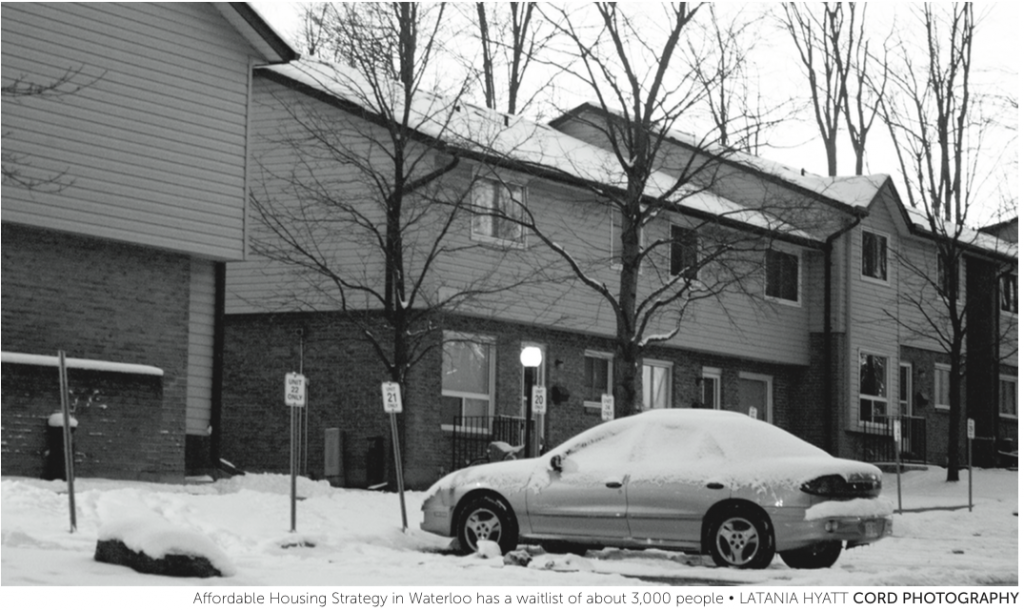 Volume 1, Issue 5
February 2013
In “LOST IN THE SHUFFLE: Low-income residents play the waiting game,” TCE talks with Richard O’Connor, one of about 3,000 local residents on the list for affordable housing. The list has grown since 2013.

Volume 1, Issue 8
May 2013
“10 Ideas to Change Waterloo Region” rolls out. “10 ideas to change Waterloo is a collection of ideas. Some of these ideas are big. Some are small. Some are just starting — they’re still just a kernel, though they could become something more.” Ideas include: Little Libraries, the Grand Porch Party, @PEOPLEOFKW, an Electric Mobility Ecosystem (that would have us transition to “clean electricity”) and Girls On Purpose, an annual conference for mothers and daughters.

Volume 1, Issue 10
July 2013
“ALL ABOARD!” TCE takes over Steel Rails, our annual art-party-community-media-fundraiser-extravaganza. 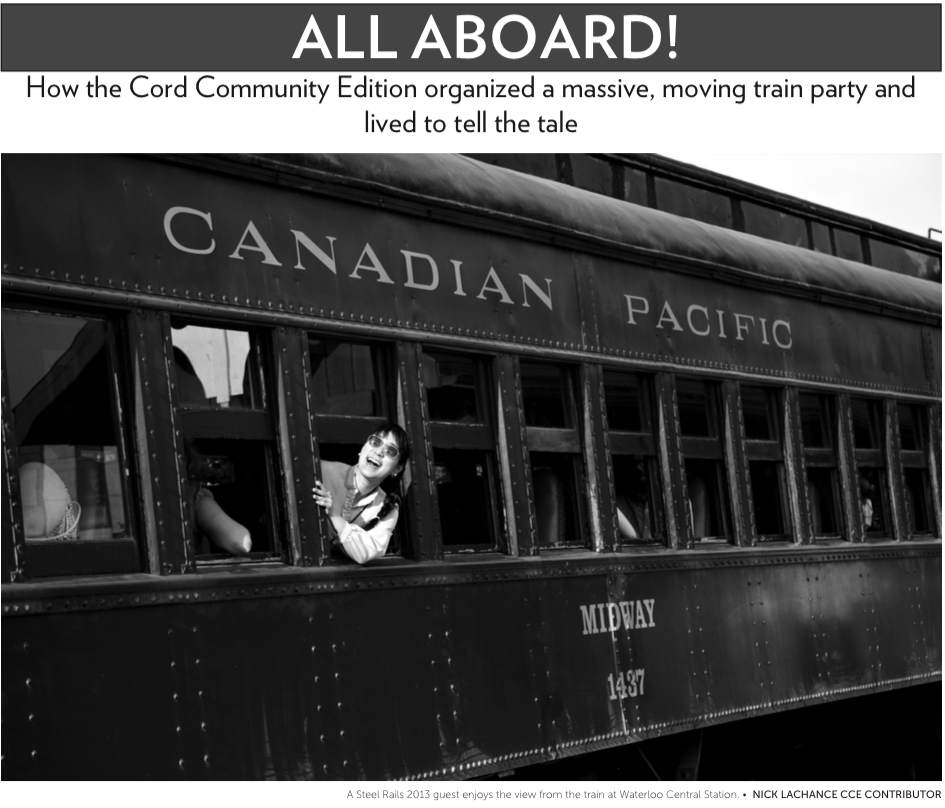 Volume 1, Issue 11
August 2013
In “RE-EVALUATING RIGHTS,” EIC H.G. Watson talks about how abortion does not have to be illegal in order to be inaccessible in Waterloo Region and beyond.

Volume 2, Issue 1
October 2013
“IT SEEMED UNSHAKEABLE: Syrians living in Kitchener-Waterloo share thoughts on crisis.” In an interview, Omar Salaymeh said he was shocked by the so-called Arab Spring, describing a long-standing culture of fear and resentment of Assad’s regime. A UW student shared a simple request for people supporting refugees: “Please be kind to us in your country.” 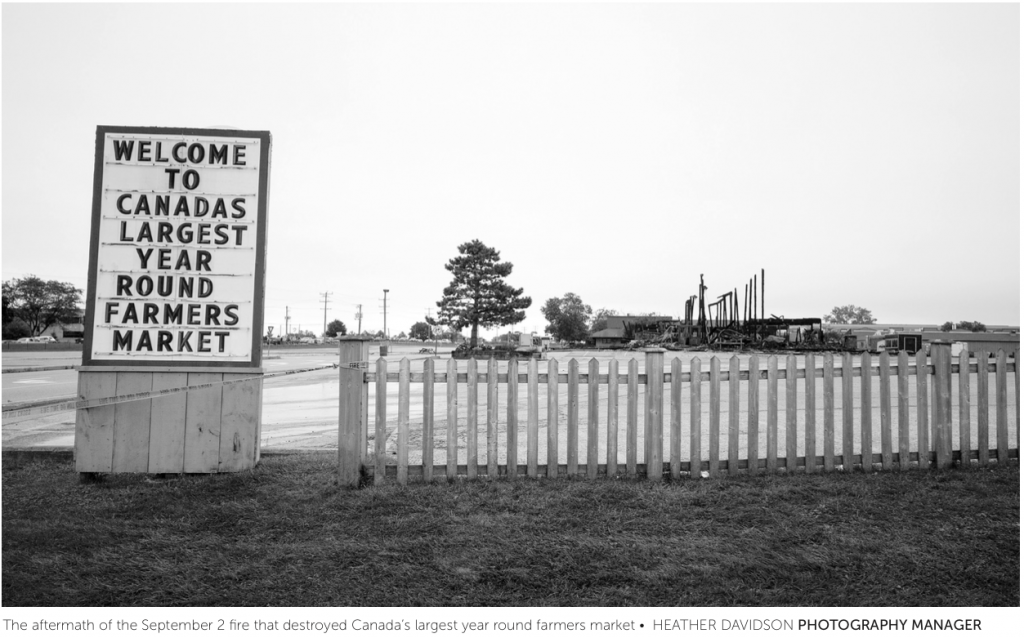 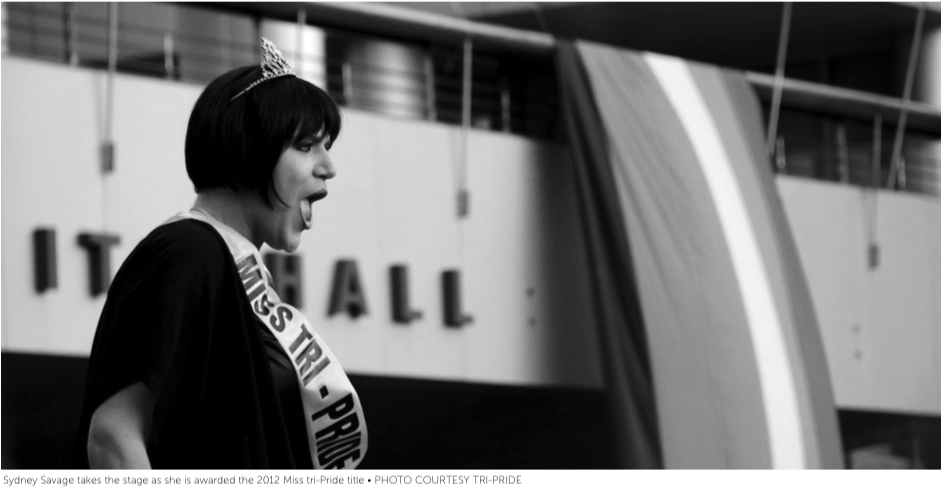 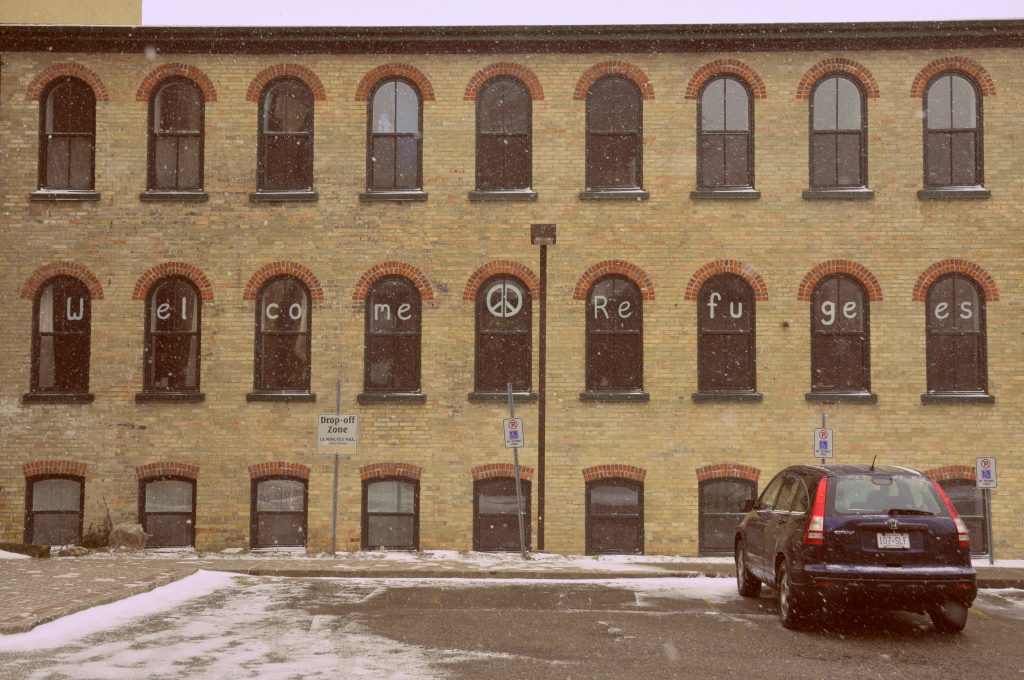 Volume 3, Issue 2
November 2014
“A HISTORY OF ENTREPRENEURSHIP” is the headline for a story about the impending closure of Schneider’s, one of Kitchener’s original industries. We told you then that the innovative and entrepreneurial culture of the region remains. See also “THE PLANE TRUTH,” David Siebert’s chat with a local hand-tool craftsman (August 2016). 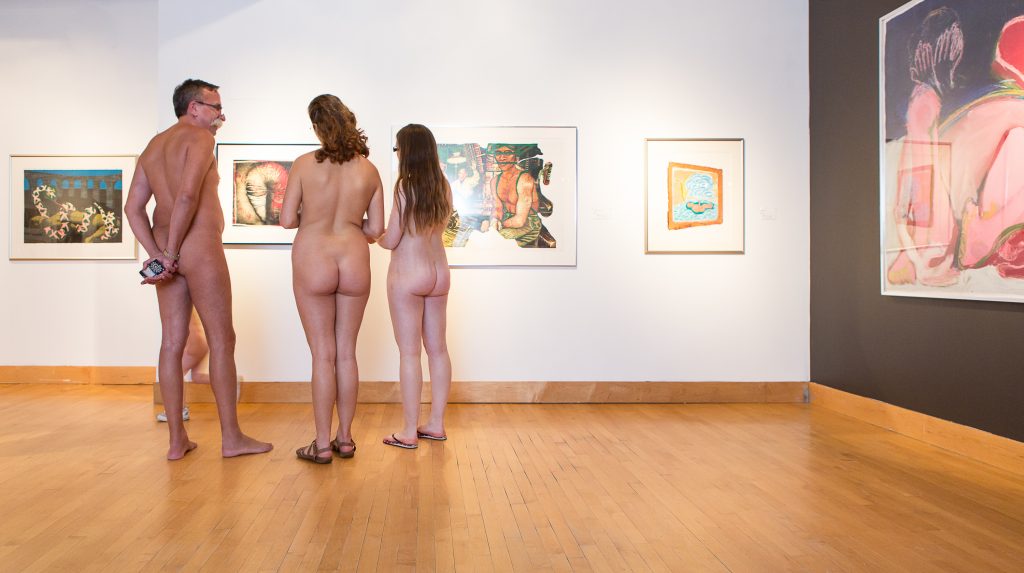 Volume 3, Issue 8
May 2015
Editor in chief Allison Leonard writes “LIVE NUDES” about her experience visiting THEMUSEUM’s no-clothes-allowed “Getting Naked” exhibition. Said she, in a follow-up note: “I expected some discussion about the frontal nudity in our centre spread, and I expected some hurtful jokes about my own body’s presence in the article itself. I did not, however expect such polarization…To those who expressed opposition to my body, my ethics or the Community Edition’s journalism at large, thank you. You were the inspiration for the story. In a culture where art that hosts or implies nudity is unnerving, undiscussed and cause for the the over-sexualization of a journalist’s body, it is time to start a conversation.” 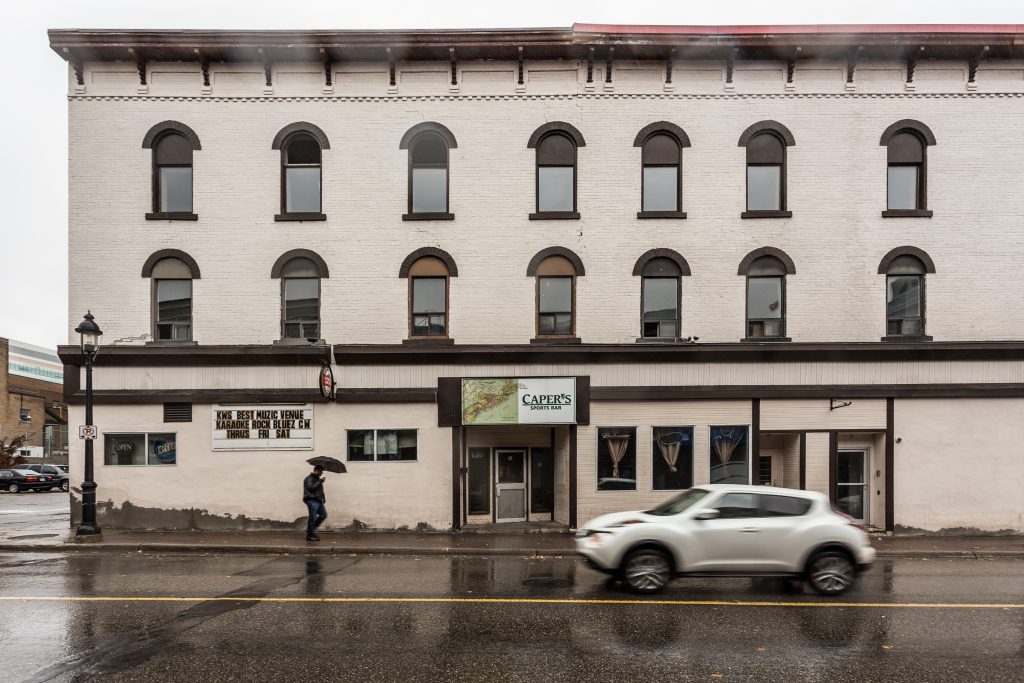 Volume 4, Issue 4
January 2016
“WE JUST HAVE TO SHOW THEM OUR HEARTS: Islamophobia in WR” begins with a story about Noor, a local Muslim woman: “Noor describes November 16 as an unseasonably warm day—a high of 15 degrees Celsius according to Environment Canada—and, pointedly, ‘the first Monday after Paris.’ On that Monday her car windows were rolled down as she sat waiting for the lights to change at the intersection of King and Weber Streets. ‘When the arrow opened for the cars beside me to go left, I didn’t see the man’s face, I only heard him yell ‘you are a terrorist!’ and go, he was gone.’” 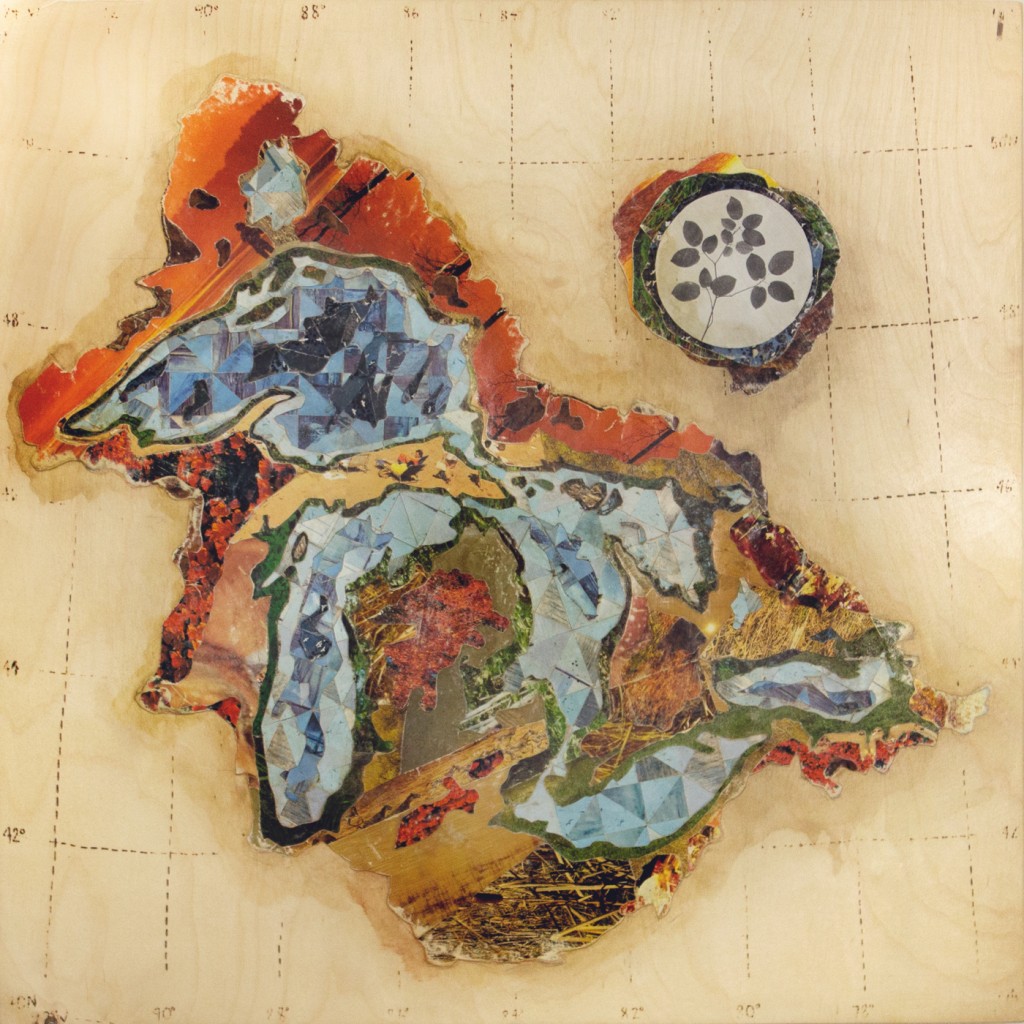 Volume 4, Issue 7
April 2016
“Did you know that Aboriginal people were forced out of Waterloo?” Meg Harder traces the histories of colonialism along the Grand River in “OUR GRAND COLONIAL HISTORY.” David Siebert continues the conversation in the same issue, in “A BAR BY ANY OTHER NAME MIGHT BE BETTER.” Identifying a trend to name local businesses after our historical fore-fathers, he argues that “by focusing on the aesthetically pleasing and romanticized aspects of our history, we are erasing the uncomfortable parts that are still with us.