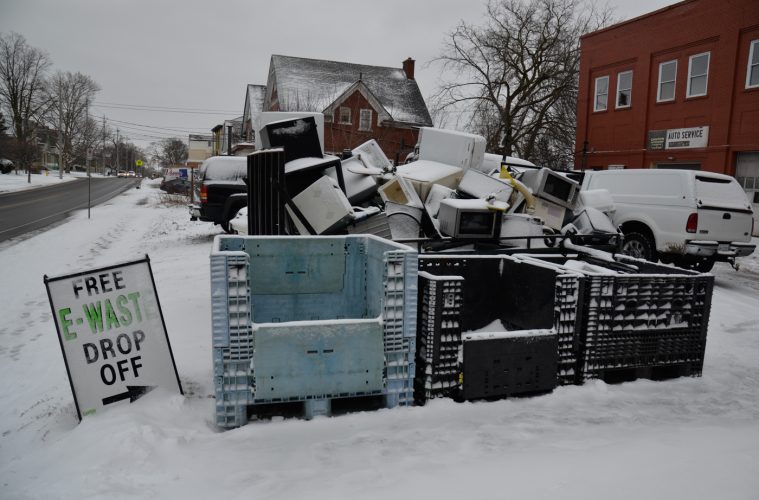 Where our TVs Go to Die

Between Benton and Peter Streets on Courtland Avenue lay three plastic bins. They are placed outside next to a large “FREE” sign, which catches my attention and draws my eyes to the accompanying words: “E-WASTE DROP OFF.” Since reading this sign I have wondered, what happens after a person drops off their slowly operating laptops and cords of unknown origin? What does such a place do with my outdated electronics? Where does it all go?

With these questions in mind I enter an unmarked door behind the drop-off boxes and meet Christine. She is sitting behind a desk and more than willing to answer my questions—she is the patient, organized grandma helping her son, and his seven year old son, deal with the never-empty bins outside their company’s shop, Carbon Footprint: Salvage and Recycle.

Christine’s job is to look at every cord, screen, audio device, router and tangled string of Christmas tree lights dropped off in those bins. She attends to each item, assesses its reusability and then decides if she will break it down. She identifies what is what, and then places like items next to one another.

Christine explains to me that Carbon Footprint’s goal is to divert these electronics from too easily ending up in the Region’s landfill on Erb Street. Given current practices, the Region predicts that the only landfill in Kitchener-Waterloo will be operational until 2030.

Carbon Footprint sells their sorted goods to a recycling company in Cambridge called Greentec. This company wants the electronics stripped so that their machines can easily shred and sell like bits to further downstream recyclers—those who sell and use our old bits to manufacture new ones.

Christine says that they are “not making a lot of money, but it’s keeping everything out of the landfill.”

And according to Christine, Carbon Footprint has so far diverted 118,335 pounds of electronics from the local landfill by sending e-waste to Greentec, and by offering a drop off site that is free and accessible from the curbside.

Christine’s grandson appears on the Carbon Footprint pamphlet that she prints out for me in her office. Pictured under the words “Eager Recycler!” he is shown on one of the company’s first father-son home pickups. Floyd, Christine’s son, drove around collecting his neighborhood’s e-waste after he distributed pamphlets in his community, slowly introducing his e-waste and metal diversion startup to local residents. Floyd aims to teach his son how he can “minimize the effects we are having on the environment.”

Once word of his service spread, Floyd bought the plastic bins and now electronics come to them, allowing more time to be spent disassembling, sorting and maximizing cleaner loads for Greentec.

They have also had to park a trailer for scrap-metal next to the bins because, as Christine exclaims, “people were dropping off everything!” They bring this trailer straight to Triple M Metal, which pays them a market price that barely covers the transportation costs and hassle to make the drop-off but at least, Christine repeats, “these things aren’t filling the landfill.”

In 2004 the region banned e-waste from recycling bins, while appliance and retail sales continue to steadily rise. Today e-waste can be dropped off at the landfill, but for a fee. Municipalities, now worrying about the safe disposal of junk alongside landfill capacities and heavy metal contamination, want to divert e-waste elsewhere. One strategy appears to be hope, namely that private entrepreneurs figure out the value of electronic trash and get to work.

Christine tells me she worked in a potato factory in Prince Edward Island for 20 years before coming to Ontario. Working and raising her kids, she explains, recycling was not on her radar.

These days, Christine thinks about recycling every day, as she sorts through barely recognizable material, discovering its value along the way. She says she is also learning something new every day, but hates that her hands are always black: colours from the metals get under her fingernails as she pulls our stuff apart, retrieving raw materials.

Before I leave she prints out Carbon Footprint’s number for me, using a label printer she recovered from one of the bins. She can’t believe someone was going to throw it out. After a little fiddling, it works perfectly.