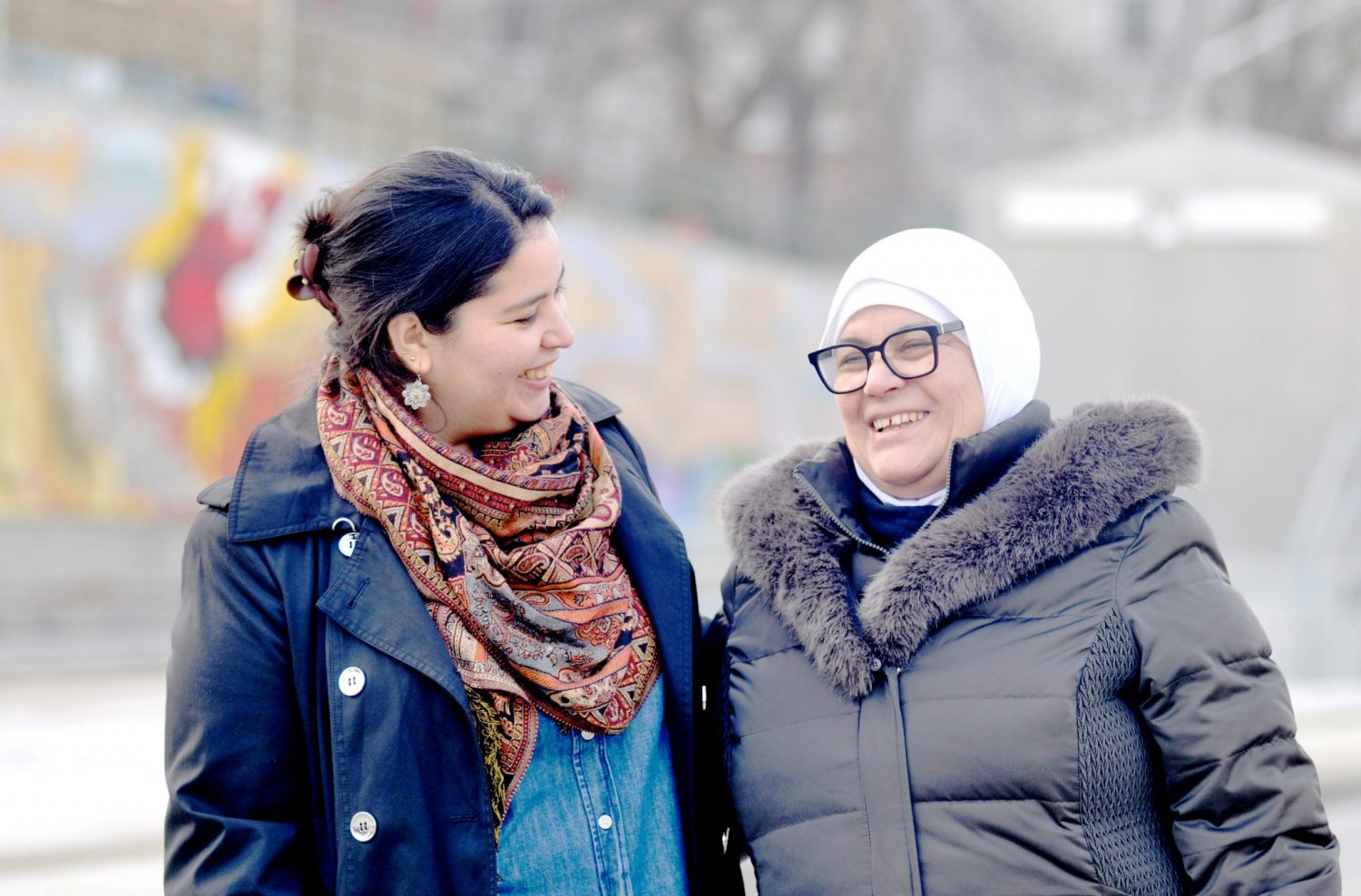 Moteaa Al Hariri had been an art teacher in Syria before war displaced her family six years ago. After four years of precarious living conditions in Jordan, in 2016, her family found refuge in Canada, supported by a private sponsor.

Once they arrived, it didn’t take long for the Al-Hariris to get involved in the local art scene.

Living first in Orillia with her sponsor, Moteaa displayed some of her art at an exhibition in the Orillia Museum of Art and History. Among other creative works, Moteaa paints scenes depicting traditional Syrian life and culture, as well as modern images of refugee displacement.

Moteaa is still learning English so her daughter, Abeer Al Hariri, translated what she said about her creative works: “She likes to do traditional style. It does not exist now, but she remembers [it] from her childhood.”

Moteaa also said that she is very thankful for her sponsor, who sold her barn in order to support them.

Now the family lives in Kitchener. They came here when Abeer enrolled in animation studies at Conestoga College.

“I like art because it is in my blood,” Abeer said, explaining that she grew up watching her mother paint, craft, sew, and make. But unlike her mother and her siblings — who were all educated in fine arts — Abeer is self-taught.

In spite of her lack of formal training, she found work as an animator in Syria.

“I don’t like to say this about myself,” she confessed humbly, “but everybody said that Abeer was the best.”

Not yet finished her diploma at Conestoga College, Abeer has already found work as an animator at a design agency in Cambridge called Pixels and Coffee.

Both mother and daughter are active in the Waterloo Region arts scene. Last summer, they volunteered for Kultrun Festival and Neruda Arts and last month they were featured in the Frederick Street Art Walk. Their jewelry and paintings sold well. Despite her language barriers, Moteaa volunteers weekly with a sewing group in Cambridge.

Earlier this year, Abeer created a piece that was featured in the Waterloo Region Museum for World Refugee Day. In ancient Sumerian text, she engraved the message: After a long time being separated, I am happy to be one family again.

She explained that she believes all humans are part of the same family, with ancient roots in the Syrian region; she professed, “I believe very strongly that we are one.”

Like her mother’s drawings of traditional culture, in what little spare time she has, Abeer experiments with Syrian-inspired motifs. For instance, she has concept designs for an animation of the Epic of Gilgamesh, one of the oldest surviving recorded stories originating from the Syrian Region.

“People think that Syria is just refugees and war — and other things like food, maybe,” Abeer said, but for her it’s much more than that.

With her art, she wants to change people’s opinion of Syrian and Muslim culture.

Both Abeer and Moteaa Al Hariri are proud to explore their Syrian culture through art. Abeer expressed that she hopes she can slowly change the public’s perception of Syria, and maybe inspire more Canadians to support refugee families.