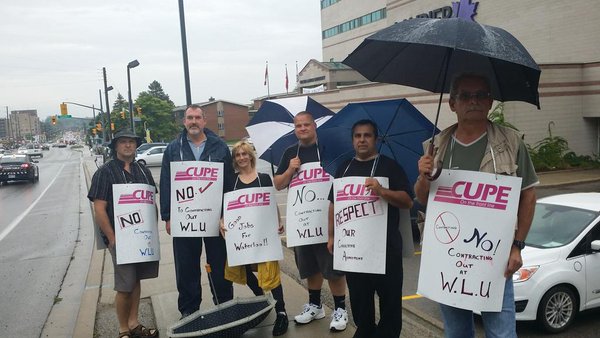 A union representing custodians, groundskeepers and tradespeople at Wilfrid Laurier University is drawing a line in the sand over the University’s attempts to contract out their work to companies that pay poverty wages.
In what is shaping up to become a battle emblematic of the broader fight for good jobs and against precarious work in this province, the members of Local 926 of the Canadian Union of Public Employees (CUPE) may end up on strike or locked out by the University over an issue that would also affect the next generation of workers at Wilfrid Laurier.
In a November 27 news release, WLU stated its interest in making its custodial services more “cost-effective” and “sustainable,” citing absenteeism, lack of shift flexibility, premium pay and overtime as barriers to achieving their plan.
CUPE staff representative Jill Smyth calls these statements insulting and demeaning. She suspects that the University’s refusal to respond to the union’s request for actual absentee statistics reveals little substance to the employer’s claims.
CUPE 926 has a typical collective agreement, by union standards. Custodians earn $21.31 per hour, get extended health and dental benefits, and pay pension plan premiums that are matched by the university. By contrast, employees of companies currently contracted to do the same custodial work receive $13 per hour, with no benefits or pensions. Living Wage Waterloo Region estimates that a decent standard of living in Waterloo Region requires an hourly wage of $16.05.
Another typical–and essential–clause in CUPE 926’s collective agreement with the university is the job security clause, which prevents the employer from eliminating union jobs as a result of contracting out work. The intent of this clause is obvious, as it prevents employers from circumventing commitments made to their unions in the collective bargaining process by simply hiring other people to do the same work.
WLU has already been playing fast and loose with this clause. As it closes buildings for renovations, it lays off the custodians assigned to those buildings, and when the building re-opens with a new name, contracts the work out to cheaper workers. The union claims this already is a violation of the collective agreement, and is taking several related grievances to arbitration, where a judge versed in labour law will decide on its legality.
The most recent collective agreement between WLU and CUPE 926 expired on June 30. On the first day the two sides sat down to negotiate changes to the agreement, WLU’s negotiators announced that the union should expect a “new regime” on the employer’s side of the table, and took the unusual and aggressive move of filing for conciliation on the first day. Typically, one party files for conciliation only after an impasse is reached, often after days or weeks of negotiations. Conciliation is a required step before a union can go on strike or an employer can lock out its unionized employees.
To punctuate its point, the University’s first set of proposals demanded the removal of the job security clause, essentially permitting it to contract out the union’s work at will. The union is left with little choice other than to stand firm at the bargaining table against this proposal: to give in to this demand would negate much of the strength of the union, and would mean an end to being able to earn a living wage doing custodial work at WLU.
At a rally attended by hundreds in the WLU “quad” on December 3, leaders of unions at the university and beyond declared their solidarity for CUPE 926 members and promised to support the custodians in their fight.
The presidents of the two largest unions at WLU, Niru Phillip of OSSTF 35 and Michele Kramer of the WLU Faculty Association, spoke at the rally. Phillip recalled the bitter strike he and his members went through in 2002, and criticized the University for seemingly forgetting how long it took to resume cordial relations afterwards. Kramer noted the irony of the University continually referring to the WLU community as a “family” in its external communications while treating its employees so terribly behind closed doors.
Two other WLU unions attended the rally, along with several activists from the Waterloo Regional Labour Council, all pledging their support for the custodians.
The stand-off at WLU seems destined for a strike or lockout early in the new year. CUPE 926 members will need support and solidarity over the coming months to maintain decent wages and work conditions.

Marc is president of the Waterloo Regional Labour Council.