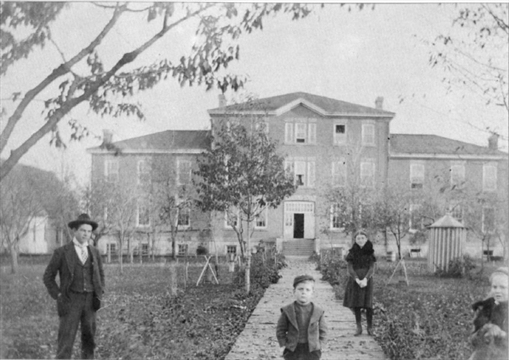 The view from upstream: Unearthed poverty

On the eastern edge of downtown, near an expressway onramp, under streets and residential properties, lie the remains of some of Kitchener’s poorest citizens.

Years ago this was the property edge of the House of Industry and Refuge, Kitchener’s (then Berlin) “poor house.” The house’s “inmates,” as they were called, were the poor and destitute, aged, disabled, and orphaned. In exchange for work on the property, they received food and basic accommodations.

After death, an inmate’s unclaimed remains were buried in the “potters’ fields” where they remain today – a reminder of how punishing society can be to those on the margins, says Sandy Hoy, Associate Director of Research at the Manulife Centre for Community Health Research.

“By not marking their graves, even in a modest way, these people have been all but forgotten, and literally paved over for 140 years.”

The Kitchener poor house was one of many across Ontario, making up our early social safety net.

“The poorhouse model, in Ontario, was adopted to help those in need, but also worked to control people at an individual and community level. Communities used it to move the poor and suffering off the streets, away from view,” said Hoy.

We’ve made progress from the days of poor houses. Today if a homeless person dies, the municipality covers the cost of a burial plot and marker. There are more layers to our safety net, more programs aimed at supporting the poorest and most vulnerable. Yet, sixty-eight years after the House of Industry and Refuge shut its doors in Kitchener, we’ve made little progress against the persistence of poverty and homelessness in our community.

Waterloo Region’s housing stability system matches the complexity of homelessness, with a system of emergency shelters, street outreach, affordable and supportive housing, and a range of housing stability and retention services.

Despite this range of services, homelessness and housing instability remains a stubborn problem. Waterloo Region, a community that’s built the most affordable housing units per capita for a mid-sized Ontario community, maintains a 3,000 person wait list for affordable and supportive housing.

“We’ve seen strong investments in affordable housing in Waterloo Region in the last decade, but we haven’t seen a decline in the waiting list,” said Lynn Macaulay, of the Homelessness and Housing Umbrella Group. “Our success is that we’ve kept our waiting list from growing, while other communities in Ontario have seen growth.”

Each year, billions are spent across the country on homelessness and housing supports, yet problems continue to grow.

“There are differing conclusions about the size of the return on investing in affordable housing and housing supports, but all of those conclusions show that it is a good investment,” said Macaulay. “The problem is, that to turn the tide on this issue, we need a large-scale, sustained investment to see savings in hospital bills, policing and other emergency services.”

What is the scale of the problem? On a cold night last December, workers and volunteers set out on the streets of Waterloo Region to do a census of the homeless population. They counted 339 people experiencing homelessness.

The social determinants of health – the study of how our social environment makes us healthy, or not – tells us that those without adequate housing will suffer long-term health consequences. Of those counted in the census, 45 per cent had health conditions associated with a high mortality risk. A shocking 85 per cent reported mental health issues, 83 per cent report substance use issues.

For housing advocates and researchers, our nation’s inability to make headway on homelessness and housing instability is not only a moral failure, but also a financial one. Studies have consistently shown a positive return on investing in ending homelessness – one program in Waterloo Region, which combats persistent homelessness, has estimated returns of $9.45 in value for every dollar spent.

Housing for each of us is about so much more than shelter, as the quality and adequacy of housing is a key determinant of health. Crowded housing puts us at greater risk of spreading illness, while environmental issues such as mold can lead to chronic health issues. High housing costs take away from the money that could be spent on other quality of life determinants, such as healthy food, while the stress of unaffordable housing can lead to long-term physical and mental health issues.

The persistence of homelessness can easily turn to hopelessness, but a local example shows that with a coordinated effort, the tide can be changed.

In 2012, Waterloo Region identified family homelessness as a priority. With the fallout of the recession being felt acutely by families, the local shelter system was stretched trying to meet increased need. Between 2008 and 2012, the number of families served by local shelters tripled, with the number of children served quadrupling. Shelters were routinely so full that an average of 10 families a night needed to be put up in motels.

The experience of homelessness is particularly damaging to children. Studies show the experience to be traumatic, with major emotional, psy- chological, and physiological impacts, often manifesting in behavioural challenges and poorer outcomes in school. Preventing children from this experience seemed an obvious priority, said Angela Pye, Social Planning Associate with the Region of Waterloo. “We looked at our limited resources and asked: “what could we do that would make a difference upstream?” The Region of Waterloo responded by working with community partners to redesign the local Families in Transition program to include a shelter diversion pilot, where workers intervene early to help families retain their housing or find new housing, all part of a plan to avoid ever reaching a shelter. Sometimes this work requires additional resources to support shelter diversion, such as covering rent or utility arrears.

“It makes sense to support that individual or family, because it’s the right thing to do and aligns with our values as a system – but it’s also cost-effective, as it’s much less expensive to end someone’s experience of homelessness, with costs often borne in other systems,” said Pye.

The average cost to support families in this program is $1,200 – a steal compared to the $4,150 cost through a shelter.

Immediately after the pilot began, the Cambridge Shelter stopped overflowing into motels. 70 per cent of the families referred were completely diverted from shelters, with another 18 per cent “rapidly re-housed”, and transitioned into new housing within two weeks. The pilot has now ex- panded to the rest of the region, with positive results.

“What does it look like to say that we have functionally ended family homelessness in our community? That is the work we are doing right now,” said Pye.

This success story provides a reminder that, while homelessness and housing instability are complex and troubling, a focused, coordinated and resourced effort can reduce and end homelessness.

“We can make changes at the local level to get better, but the biggest barrier remains funding. We can’t house the 3,000 people on the waiting list without more money,” said Macaulay.

Today the poor house seems like such an outdated and archaic institution – with the will, and adequate, long-term investments from provincial and federal governments, homeless shelters could be viewed the same way tomorrow.

Cameron Dearlove is a community developer and advocate for healthy public policy in Waterloo Region. Questions and ideas can be sent to cameron@thedearlove.com.