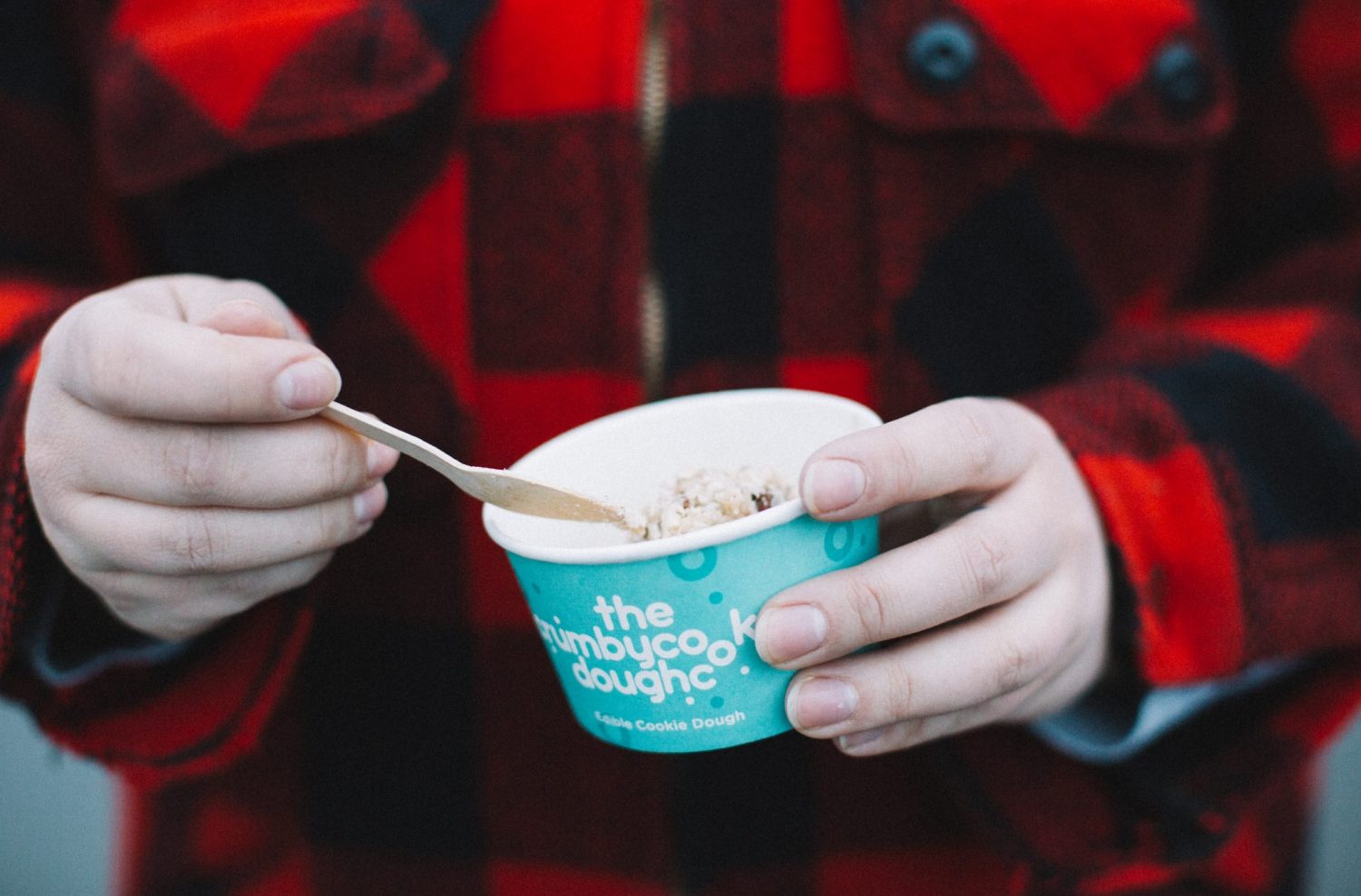 The Side Hustle: That’s the Way the Cookie Crumbles

On Halloween night of last year, Sara McMurphy decided to keep her friend, Jennifer Appleby Vines, company as she handed out candy to trick-or-treaters. At some point in the evening McMurphy went to grab a drink from Appleby Vines’ fridge. In it she noticed an open tube of Pilsbury chocolate chip cookie dough with a spoon sticking out of it.

“You eat that stuff?” McMurphy asked her friend.

“You don’t?” her friend replied back.

They talked for a bit about Appleby Vines’ guilty pleasure and then the conversation moved on to other topics.

“The night ended and we went our separate ways. Then the next day Jenn was like, ‘Are you thinking about cookie dough?’” McMurphy recalled.

It turned out she was. 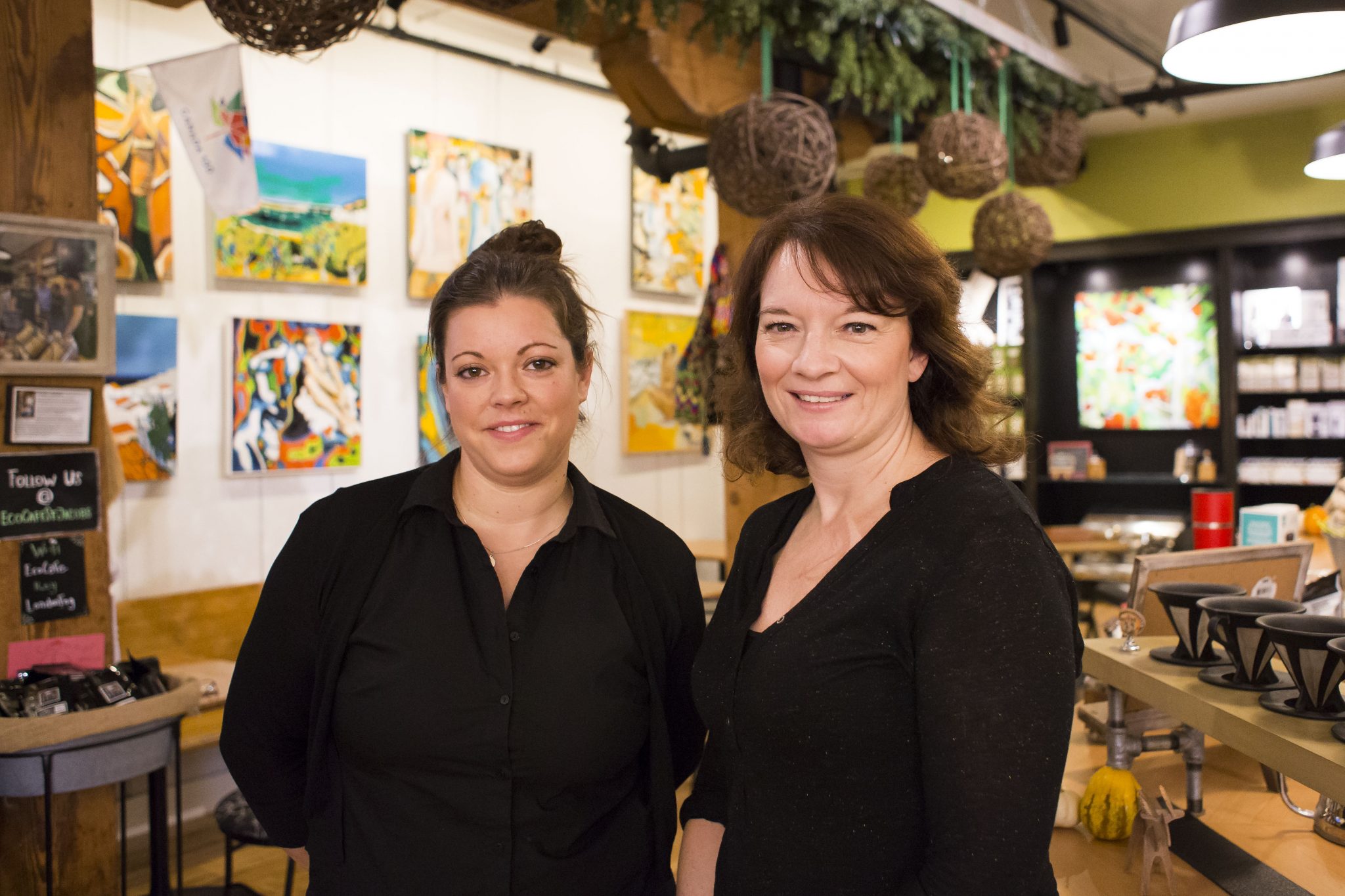 Jennifer Appleby Vines (right) and Sara McMurphy (left) the owners of Crumby Cookie Dough in the Eco Cafe in St. Jacobs where their cookie dough is sold.

Both Appleby Vines and McMurphy have a background in the culinary industry. They became friends while working together at The Charcoal Group. McMurphy was a chef and Appleby Vines was in sales and management. While they both left their roles at Wildcraft earlier this year for different reasons, they count many years of experience in food service as invaluable.

Appleby Vines now works for local start-up Georgette Packaging while McMurphy is working for Indigo. With the 80-hour workweeks of their previous roles are behind them, they had the time to give a potential side hustle the tender, loving care it would need.

After realizing they both couldn’t get cookie dough off their minds, Appleby Vines remembers asking McMurphy, “Wouldn’t it be cool to make a cookie dough with good ingredients?”

Initially, they threw around ideas about how to make a better version of a Pilsbury dough, intended for baking.

But they quickly learned, as Appleby Vines said, “that almost all the major cities [in the US] have an edible cookie dough café or store where you can get cookie dough in a cone or a cup.”

It turns out that by heat-treating the flour and the eggs, the raw dough becomes safe to eat.

The pair did some research and realized that while there were a few places in Canada serving up raw cookie dough, there were none that impressed them from a branding and presence point of view.

By Christmas of 2017, the two soon-to-be entrepreneurs had talked to countless friends about their idea. Their friends suggested that they do a test market phase. So they invested in what McMurphy affectionately calls, “the smallest little food trailer.”

They decorated it with 1960s-style wallpaper and began to book themselves into festivals across southwestern Ontario for the summer season.

At the same time, they began to experiment and play with recipes.

“It was quite the process to even just make a simple chocolate chip version,” McMurphy said. “For example, we tested eight different butters just to find the perfect butter. The one we settled on is from Stirling Creamery and our cookie dough wouldn’t be the same without it. We are really focused on quality of ingredients, and we want to source as much as we can locally.”

The pair proudly introduced their new baby, the Crumby Cookie Dough Co., at the Elmira Maple Syrup Festival in April of 2018.

It was a big hit at this and subsequent festivals, as the little cookie dough trailer made its way to another city or town almost every weekend until the end of the summer. Over time they expanded their flavour menu and now offer 13 different options with incredible names such as “Feisty Redhead,” “Rainbow Pony Show” and “Pretty Fly for a White Chai.”

And they come up with delicious new ideas every day.

“I would love to do a cookie-dough beer pairing,” McMurphy said. “I can see a stout or dessert-y beer going really well with a chocolate chip cookie dough.”

While Crumby Cookie Dough Co. remains a side hustle on top of their day jobs, Appleby Vines and McMurphy have big plans for the future.

“Ultimately, our goal is to have a storefront location, similar to what Ajoa at Four All Ice Cream does where she’s open a couple days a week, and doing both wholesale and retail,” Appleby Vines said.

They also have dreams of striking a deal with larger retailers such as Whole Foods and Farm Boy.

It is hard to imagine this industrious pair not succeeding. But even if they come upon tough times, McMurphy is prepared.

“Worst-case scenario, we have a trailer. I can live out of that,” she joked.

With an ever-growing demand for their product and the legalization of cannabis edibles on the horizon, it appears the future will be Crumby in name only for these two.