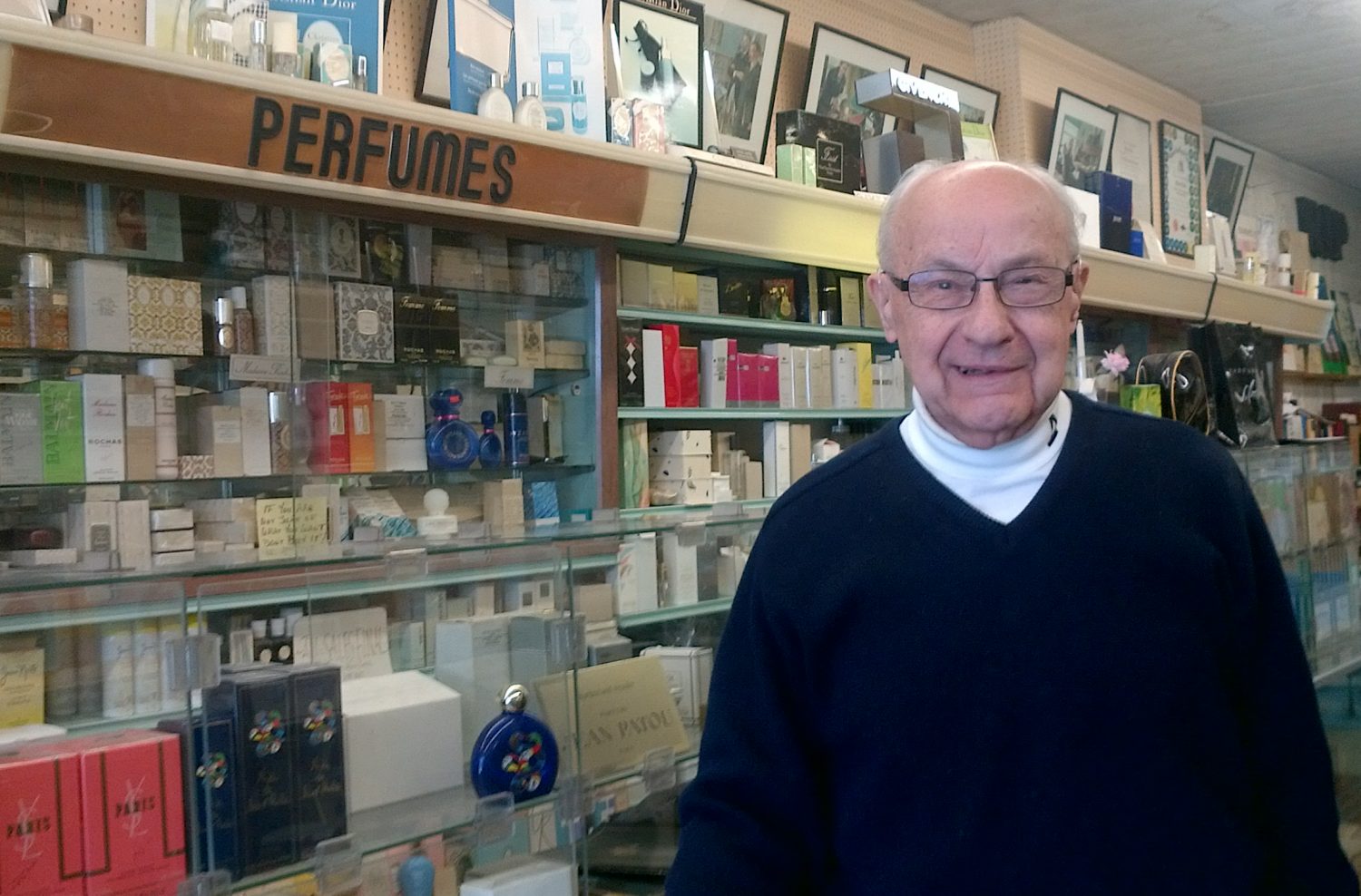 The man who sold smells

Michael Fritsch in the perfume store he has worked in his entire life. • Tanishka Kundu CCE Contribuor

There was little delivery boy who worked at Fahrner’s Drugstore in Downtown Kitchener in the 1940s. He worked there all through high school until he had to go to Toronto in search of an education. He graduated a pharmacist and came back to Kitchener to work in another drugstore, but Fahrner’s needed him. Finally, in 1959, the little delivery boy, now a man, bought the business and property, turning it to Fritsch Pharmacy and then, in 1988, Fritsch Fragrances.

Michael Fritsch, the man in question, is currently at the counter talking to a couple from Cambridge. I overhear them saying how they couldn’t find this perfume anywhere else. If you can’t find a particular fragrance anywhere, chances are, you haven’t yet set foot in Michael Fritsch’s store.

Business is slow. “We spent about a million bucks on the street here. They made the sidewalks wider and the roads narrower; if you want people to shop you need room for cars, and they took a lot of the parking away,” Fritsch tells me. “I’m lucky if I get ten [people] a week. All the big companies — Sears, the Bay — get all the advertising and promotion and that’s where most people will go.”

Two rows of shelves and counters hold bottle after bottle of perfumes. Near the counter, I spy old lipsticks and eye-shadows from long ago, some of them gone bad and rancid, now bought for their packaging by collectors. I poke at the soaps beneath the checkout, wrapped up in dainty origami. They smell good. There’s a sign stuck behind the glass in one of the shelves: “If you are not sure of what you want, don’t buy it!”

The store stocks fragrances that department stores don’t stock. From behind the counter, Fritsch says, “I’d like to think that 10 percent of the population doesn’t want to smell like everyone else, who want something unique.”

A few decades ago, department stores sold clothes and furniture, but not cosmetics. When the pharmacy started to sell make-up and perfumes, customers came in flocks to buy what they couldn’t really find anywhere else. Then the big sharks started to get in on the action.

A few years ago, gave a certificate to the store marking its fiftieth anniversary, but it doesn’t help the trade. Even though the shop is smack outside the city hall, right next to a major bus stop and a two-minute walk away from the Charles St. Terminal, it is deserted. At this point, the property is getting much more interest than the business.

During our interview, Fritsch says: “In Toronto, they kept the old city hall and built the new city hall right beside it. We tore ours down.”

I fear that something similar will happen to this wonderful store, with its vintage decor, messy back end, and pretty glass cases. But I am reassured by Fritsch’s passion. This is a man who really loves what he does. No matter how many department stores decide to go head to head with him or how many people want to buy the store, Fritsch Fragrances will continue to struggle against the times.