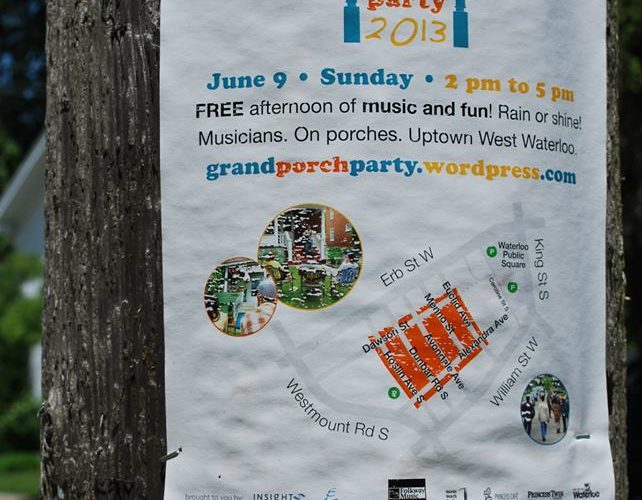 The 2013 Grand Porch Party was just one of the many highlights of this year’s local music scene. • ANNA BEARD ARTS & CULTURE EDITOR

2013 was a dynamic year for the music scene in Kitchener-Waterloo. There was change, uncertainty and setbacks. There was also fortitude, opportunity and progress. Through it all, we saw both a resilient population of local musicians and a community that continued to value and support them — it was an inspiring year.

Two of the year’s most high profile stories involved thwarted efforts by local music impresarios. First, the legendary Boathouse was closed as its equally legendary manager Kevin Doyle parted ways with his landlord, the City of Kitchener. Second, Paul Maxwell of Maxwell’s Music House in Waterloo was stymied in his attempt to turn Dooley’s Pool Hall into a live music venue.

Hopefully these are temporary setbacks as the City of Kitchener is searching for a new manager/lessee for the Boathouse and Dooley’s future as a music venue is now before the Ontario Municipal Board.

In spite of these developments, the local music scene continued to flourish in 2013.

Most of the regular Boathouse performers have been welcomed into new venues, with some venues featuring live music for the first time. This speaks well for the resourcefulness of the performers and venue owners in their quest to meet the needs of the local music supporters.

A shift in programming at Centre In The Square came into sharper focus thanks to newly appointed CEO Sandra Bender, with more youth-oriented shows, more comedy and an amazing run of shows by guitar legends like B.B. King, Joe Satriani, Rik Emmitt, and Brian Setzer. World-class programming has found a new stage in downtown.

There was a full calendar of big music festivals this year celebrating big anniversaries – KOI Fest, the Busker Carnival, Jazz Fest and Blues Fest to name a few. It was hard to find a weekend in the spring or summer that did not have a festival scheduled. In addition, the thoroughly delightful, new-to-the- scene Grand Porch Party entertained a strolling audience with live music from front porches all throughout a downtown Waterloo neighborhood.

Civic support for the arts in general and music in particular was also quite strong in 2013. The City of Kitchener’s Music Works project which works to support, facilitate and accelerate the local music business cluster, met regularly in pursuit of its goal to foster a vibrant musical culture and community. Creative Enterprise Initiative rolled out a wide array of services to support local artists, everything from mentor programs to grant writing/professional development workshops to group rate insurance plans and even a mobile ticketing service. They are on fire and ready to serve artists from all sectors in the community.

All in all, the two high profile setbacks of 2013 were outweighed by the commitment of the local musicians and their supporters in their quest to make the KW region a vibrant musical community. This bodes quite well for 2014!