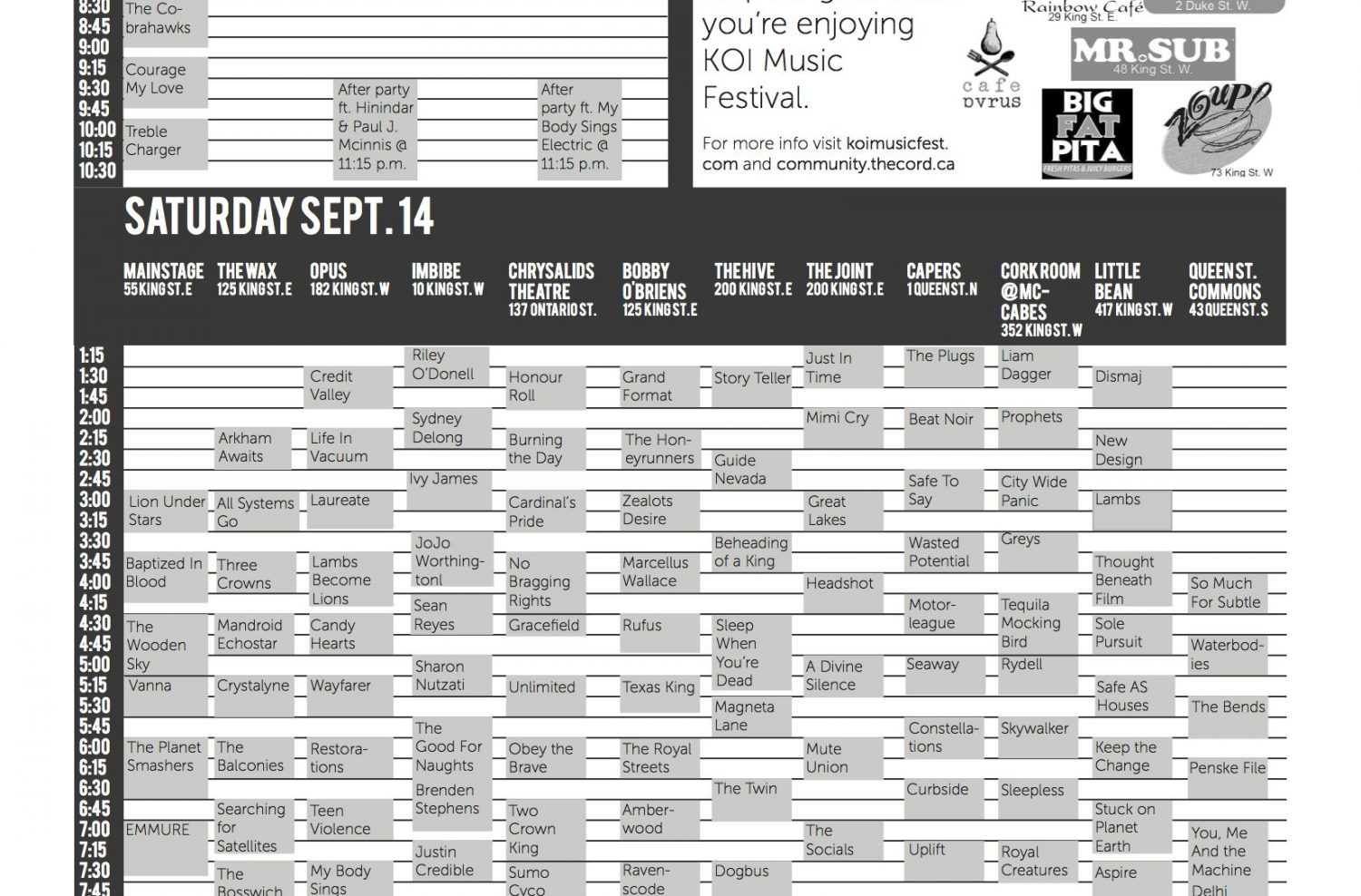 The best of KOI Music Festival

Overwhelmed by choice? Our music experts weigh in…

Treble Charger
For anyone who remembers this band’s hits from the late ’90s and early millennium, this is a must-see. See what this band is up to now during their free show on the main stage. Don’t fret, their Canadian pop punk classics are sure to be featured heavily throughout the performance. For this guy, who listened to “A Hundred Million” hundreds of times while playing NHL 2003 during my early teens, another band will be crossed off my “Bands to See Before I Die” list.
Friday, September 13 @ 10 p.m. at the Main Stage

Crystalyne
This Toronto based band is another can’t miss, but not because of their history. Their young vibrant sound will take over control of your limbs and have you swaying to the beat right away. On top of the phenomenal singles they’ve put forward already, such as the new and super catchy “Secret” and my personal favourite, “Wolves,” they also do great covers of current hit music. Katy Perry’s “Roar” is one example. The powerful voice of lead singer Marrisa Dattoli, formerly of Good & Broken, will send shivers down your spine – in the good kind of way.
Saturday , September 14 @ 5:15 at The Wax

Courage My Love
This local trio is a definite must-watch on the Canadian music scene. Led by 19-year-old twins Mercedes and Phoenix Arn-Horn, they’re already signed to Warner Music and have toured as far as Japan. Their pop-punk/alternative sound will have your attention throughout their performance. Their perfectly sung lyrics paired with a heavy sound promise what I would say will be THE can’t miss show of the weekend.
Friday, September 13 @ 9:15 p.m. at the Main Stage

The Cobrahawks
If 80’s hair metal and classic rock had a bastard child, the Cobrahawks would probably jump out in spandex and bandanas. The Kitchener natives are high energy, cheeky and come off as a fun band that will put on an amusing show. If you want a show to just sit back and drink a beer, you’re in the wrong place. Be prepared to mosh.
Friday, September 13 @ 8:30 at the Main Stage

The Honeyrunners
If The Honeyrunners’ performance doesn’t make you dance, something is terribly wrong. A self-described Motown rock band, The Honeyrunners have a warm, soulful indie rock sound that translates well to the stage. They recently played a set at this years’ North by Northeast (NXNE) which was well-received. It’ll come as a surprise to no-one if they repeat NXNE’s success at Koi Fest.
Saturday, September 14 @ 2:15 at Bobby O’Brien’s

The Wooden Sky
The Wooden Sky is coming off of a big year – they recently were nominated for a Juno and won an Indie for Folk Group of the Year. Their latest album Every Daughter a Child is creating a lot of buzz for TWS which makes this show a do not miss. Their dreamy folky sound is a little different than the harder sound Koi Fest is known for but it’ll be a nice, relaxing break.
Saturday, September 14 @ 4:30 at the Main Stage

Bayside
Main stage artists Bayside will be an act you won’t want to miss. They’ve shared the stage with so many great artists and have a catalogue of anthems, so this performance will surely be a memorable one. They have just released a record of cover tunes so I’d expect to hear a cover or two. With big catchy choruses, Bayside will certainly be a festival favourite.
Saturday, September 14 @ 9:00 at the Main Stage

Exalt
Kitchener’s own Exalt will surely play to a packed house at Opus, so plan to arrive early if you want to get in. Exalt’s brand of hardcore has them on the road playing to packed rooms across Canada and the US regularly.
Saturday, September 14 @ 8:15 at Opus

The Mahones
They’re Canada’s original Celtic punk band with 11 full-length albums under their belt. From an Irish pub to having their music featured in the Fighter, an Academy Award-winning movie – The Mahones have come a long way in 23 years! Heralded as pioneers of the Irish punk scene, they are internationally recognized as one of the best and hardest working punk outfits around. Raise a pint of Guinness and sing along!
Saturday , September 14 @ 10:00 p.m. at The Wax