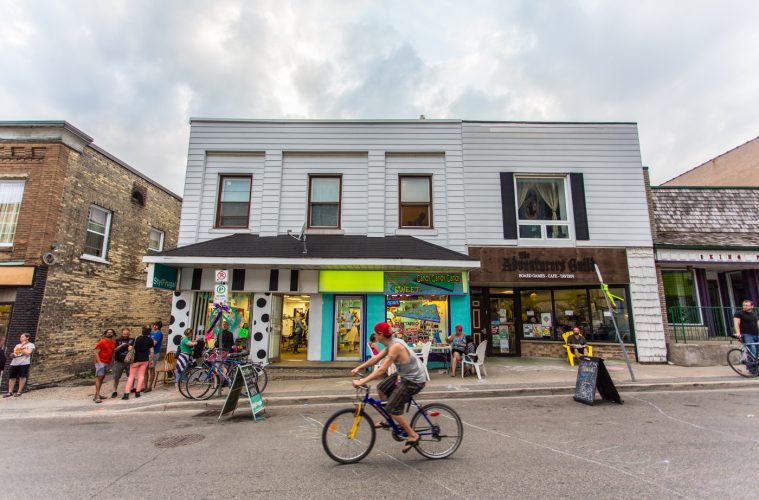 When the game of Kerplunk is five feet tall, it’s pretty hard to walk past without stopping to stare. That’s okay. In fact, it’s ideal on Ontario Street.

Kwartzlab’s tremendous Kerplunk game is just one of the playful, interactive attractions that was used to pull crowds into Ontario St. and Goudies Lane on Friday, May 29 during the first FUNtario event of the summer. The City of Kitchener has teamed up with Ontario Street business owners and the BIA to create three monthly events celebrating all that Ontario St. offers. Ontario St. continually draws the office crowds down from their towers at lunch. The FUNtario events are designed to spice up the nights, too. 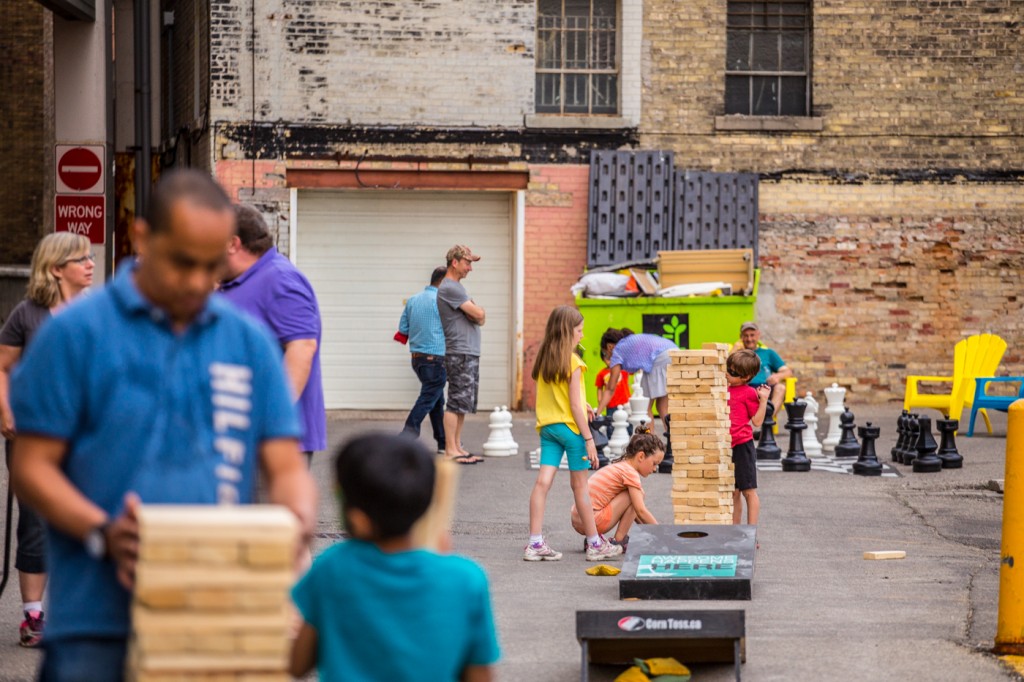 “We’re adapting the FUNtario events from Night\Shift,” says Eric Rumble, downtown marketing and program coordinator for the City of Kitchener. “We’re using downtown spaces and reimagining that space for other purposes. Nobody’s really doing anything in Goudies on a Friday night. It’s midway between King and Duke, two blocks longish. It’s this hidden feature of downtown. This is an exciting area for community-building and public engagement.”

The stretch of Ontario between King and Weber has transformed from average side street to thriving hotspot over the past two and a half years as the new arrivals stacked up: StylFrugal, Candy, Candy, Candy, The Adventurers Guild Board Game Café and Tavern, Apollo Cinema, Gr8 Escape, and as of May, Black Arrow Cycles. 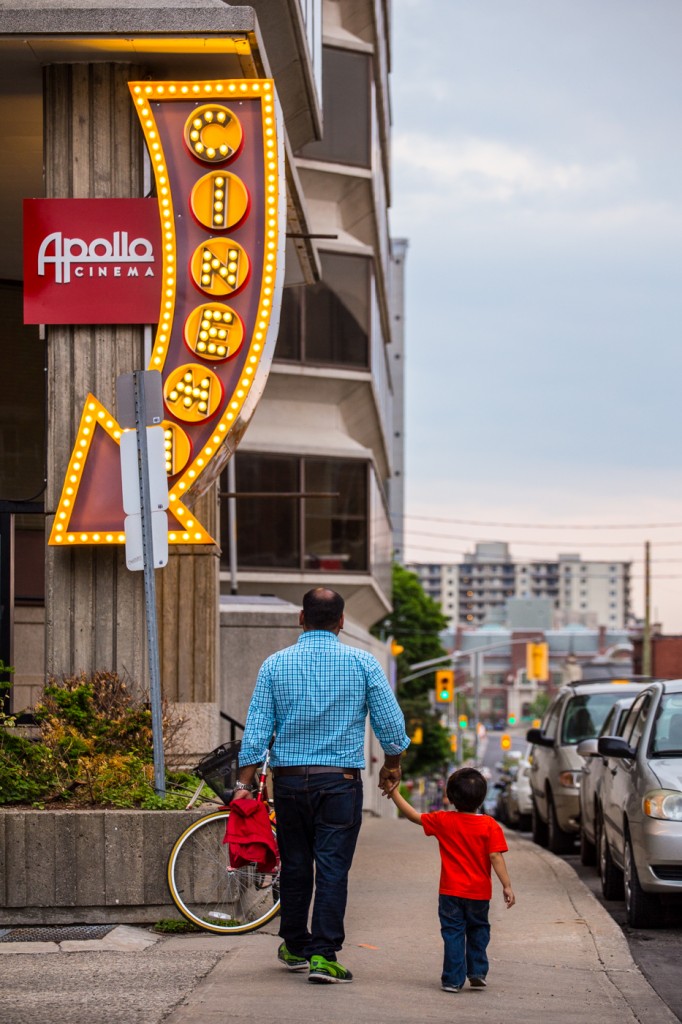 On this singular street, trendy meets quirky and tech crowds blend with arts crowds. Targeting the 20s-to-40s bracket, the new wave of independent business are purveyors of chic consignment clothing, retro commuter bikes, movies and craft brews. Also making appreances: escape room activities, a not-your-living-room space for board games, local beer on tap, and the best Zelda themed sandwiches east of the Hyrule Castle. (Try the Tri-Force of power – prosciutto, mayo, mozza and red onion on panini with salad or kettle chips and
a pickle!)

Growth in this location can be attributed, in part, to price.

“It’s as close as you can get to being on King Street without the high rent,” according to Kate Cox, co-owner of The Adventurers Guild Boardgame Café and Tavern.

However, when we dug deeper and asked proprietors what allows this shopping and entertainment oasis to thrive in a downtown that has struggled to rise above a bad rap, the most oft-cited answer was: it’s an energy. It’s a vibe. 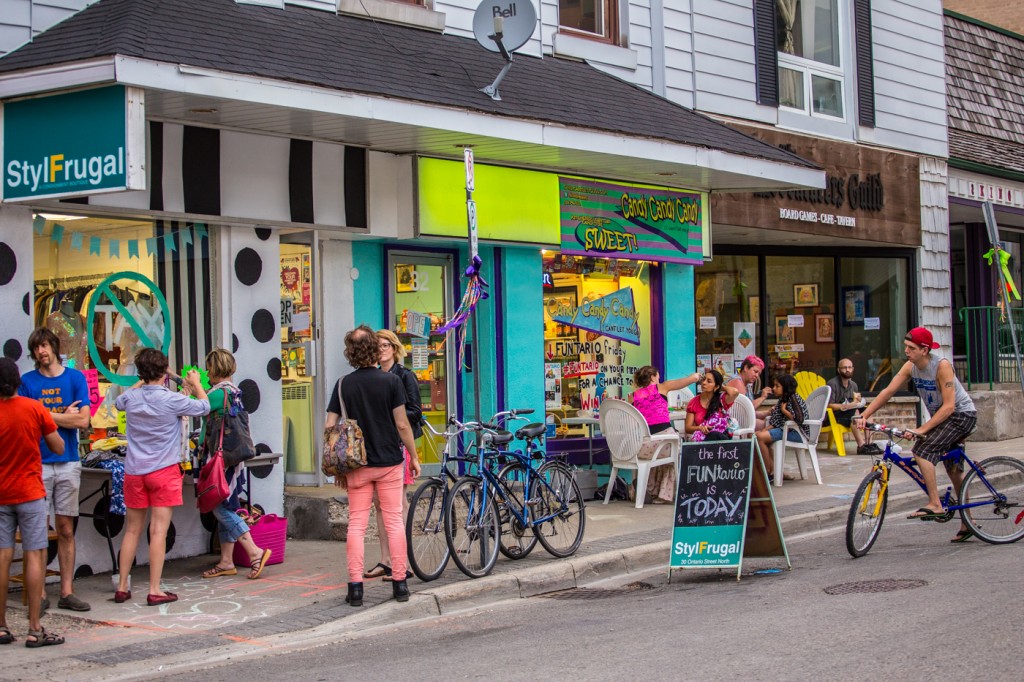 “The one thing that’s surfaced is that businesses need to come together to succeed,” she says.

Kwiecinski regularly flits through KW networking events to identify other likeminded, intrepid, entrepreneurs and entice them over to Ontario.

“We wanted more, similar businesses, going for the same demographic. That was the plan. There was effort
in that,” she says. “Now businesses are asking me, now there’s a definite demand.”

So many businesses on the Ontario St. strip had a story that elicits the warm fuzzies. For Jess Robertson, owner of newly-minted Black Arrow Cycles, community-oriented attitudes are mission critical.

“This is a unique street, and the momentum around it strengthens the community,” says Robertson. “I’d barely signed a lease here and was meeting the neighbours on both sides. It’s a great community here. Kind of a surprise!” 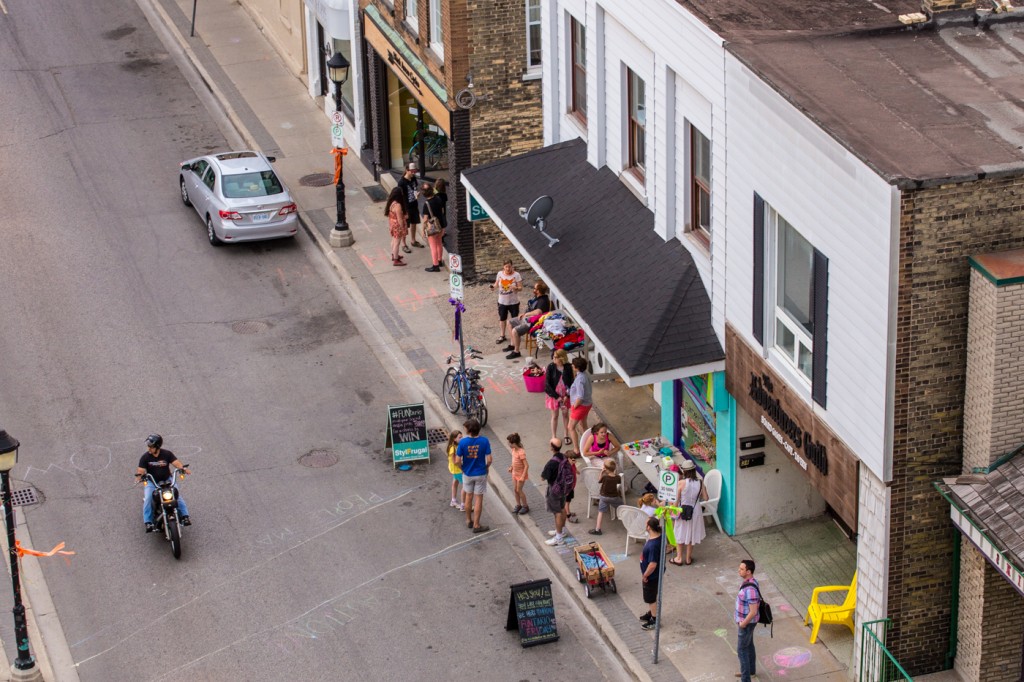 Pleased by the warm welcome, Robertson is quick to add that he is also serious about his responsibility to the wider community, to Kitchener residents – all of them. He saw a need for an urban commuter shop, and he hopes to contribute to downtown vitality by “helping get people equipped to ride every day.”

While the focus is on durability, he offers bikes that could last a lifetime, and he offers parts that are more affordable, entry-level, but designed to be replaceable for long-term value.

Robertson adores practical Dutch bike designs, and Toronto-based all-weather cycles, too. His shop is stocked with ready-to-roll Linus, Simcoe and Masi bikes, shimmering in stunning vintage hues – cornsilk and crimson, tangerine, cadmium and baby blue. Each cycle hosts a comfy seat and fenders, perfect for recreational rides or dodging construction and arriving at work, maybe feeling sweaty, but earth-friendly. Definitely worth a visit if you are in the market for new wheels or repairs to your trusty steed. 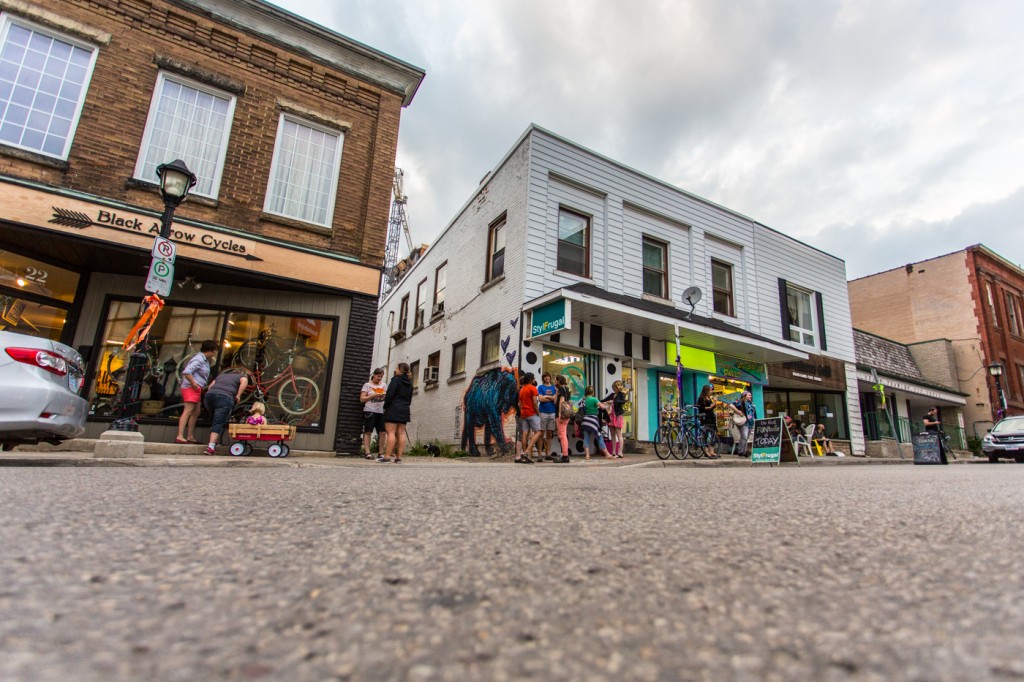 Like Robertson, Candy, Candy, Candy owners Dave and Sharon Watson couldn’t wait to relocate to Ontario Street, even though business was decent on Queen.

“It’s a feeling more than anything else,” says Watson. “That’s why we moved here.”

“StylFrugal and The Guild were here before we were, doing a lot of work to get things going. We moved from our old location because we heard about this through connections with Guild owners. As soon as a space opened we high-fived our way in.”

Paying it forward, Candy, Candy, Candy has lent a helping hand to The Adventurers Guild crew. At Bluesfest last year, Watson had a table, and the Guild owners had just arrived. They didn’t have a dedicated space, so Watson offered them room to set up some video games in his space. Super Mario and specialty candies were united at last.

“We just went together,” says Watson. “We still do.”

The welcoming, inclusive atmosphere is winning the hearts (and dollars) of Kitchener-Waterloo residents, as well. The lines between tech and art are blurry here. The tired “nerd vs. jock” stereotype do not apply, says Watson. Kate Cox agrees. The Adventurers Guild Board Game Café and Tavern co-owner is a regular matchmaker extraordinaire.

On “Lone Wolf Wednesdays” (when new players are encouraged to make their debut) and every other day, Cox says she loves being able to knit together new social networks. Because who wants to confront that quest alone? 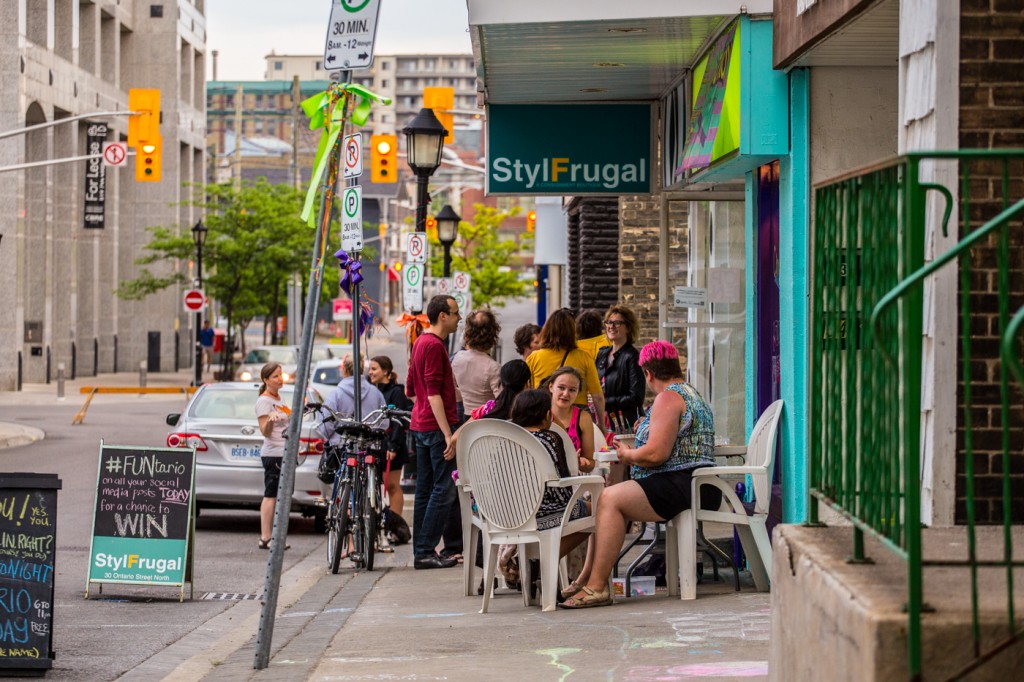 “What I do is break the ice for them,” says Cox. “I find out what they’re into and go around to tables with them. Ninety-nine per cent of the time the reply is ‘yeah! Awesome!’ unless it’s a couple on a date. People end up spending the whole night until close playing a game. We have a group that meets two times a week. They met at the opening Lone Wolf Wednesday.”

“It’s easy to run up to someone in the schoolyard and say, ‘Hey, I wanna play with you!’ But when you’re 33, it’s a little more difficult. It helps to have something to do. Definitely, local craft beers help too,” Cox says with a laugh.

Gr8 Escape is another entertainment venue where visitors tend to create uncommonly strong bonds when they least expect it.

Co-owner Sim Kahlon says he first tried escape rooms in Toronto for a friend’s birthday and was instantly hooked.

“We got out with about a minute to go. I got that rush.”

“The excitement stays with you, and the conversations about your shared experience keep going,” says Kahlon. 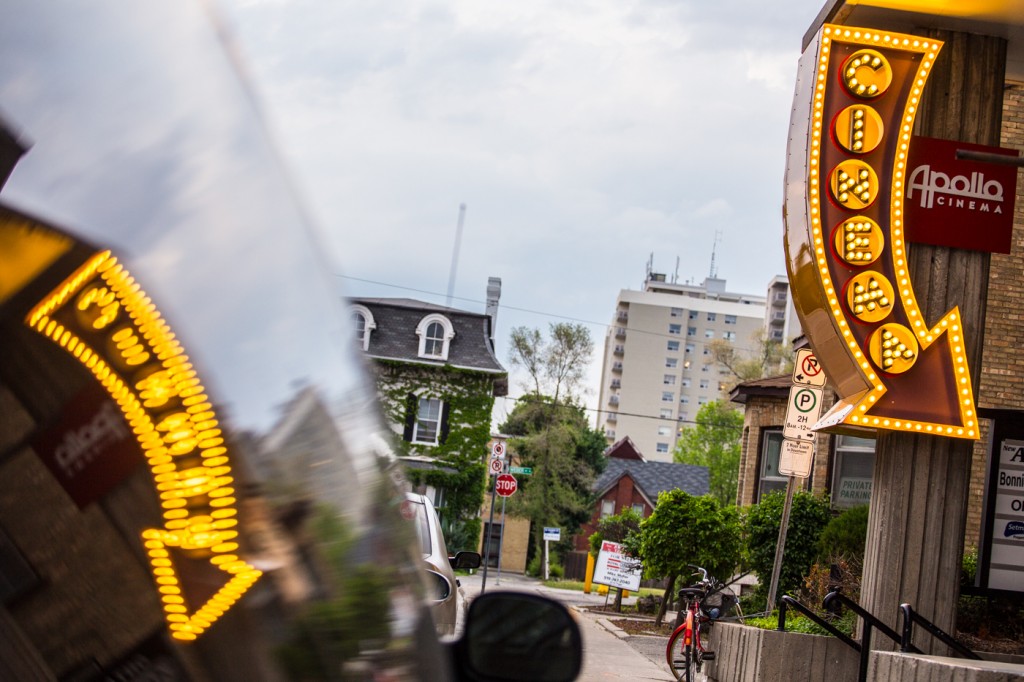 Players from ages 10 through 60 have tried out the rooms at Gr8 Escape, in teams from two to six. Any combination of people is worth trying, Kahlon emphasizes. There are so many different types of puzzles inside, that it’s actually a benefit to have a mixed team. Regardless of how well you know your teammates going in, you’re sure to learn a lot about them before you leave, according to Kahlon. It’s a one-of-a-kind bonding experience.

“The whole goal is to get a key to escape,” but the Gr8 Escape team also has plans to launch some unconventional games in public spaces to energize the city.

The team of four that founded Gr8 Escape looked at a few cities, but were attracted by the small businesses that were already established on Ontario Street. They hope their success will have ripple effects for nearby destinations, too.

“There were not many other entertainment businesses in downtown Kitchener,” says Kahlon. “That’s what makes us so excited to be here [to add to the mix of businesses]. Most people will go somewhere before, spend an hour at Gr8 Escape, then go out after, for a birthday party, or drinks.”

Gr8 Escape and Black Arrow Cycles will be ramping up participating in FUNtario for June so don’t miss it! Mark June 26 in your calendar and stay tuned for event details. The theme is “The Circus” and Cox is working on something burlesque inspired. 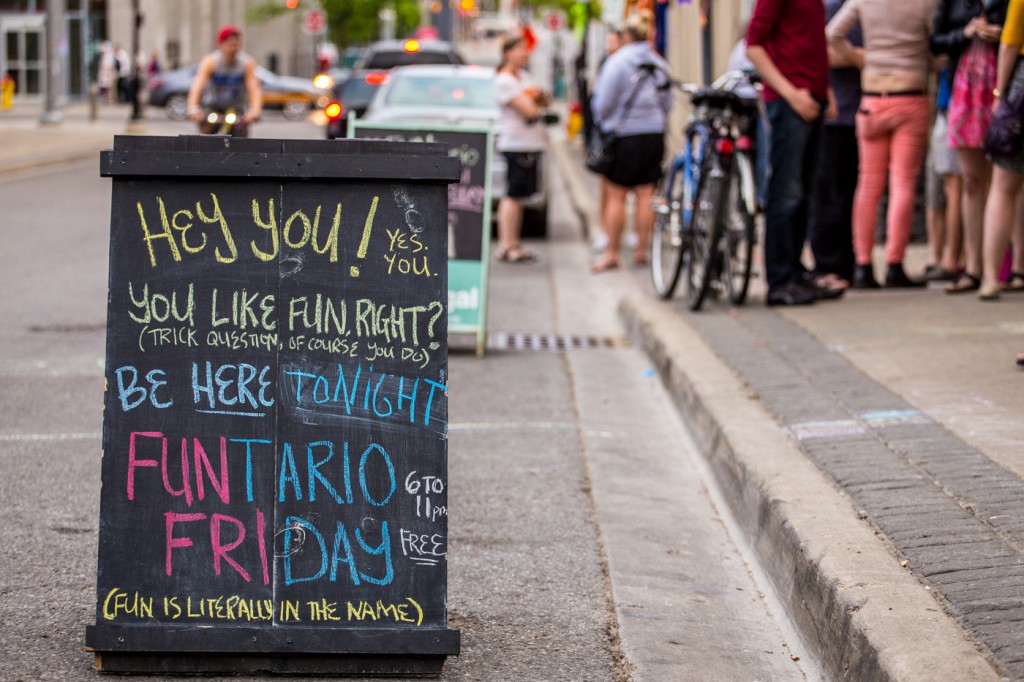