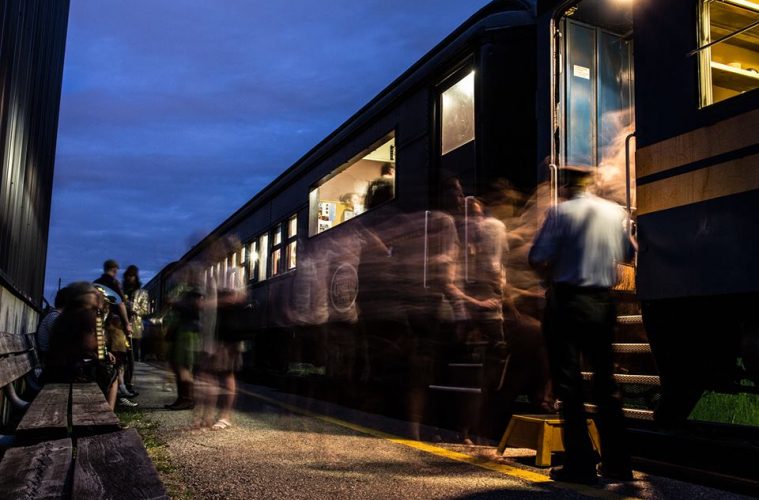 “We’re literally rolling through the heritage of Waterloo Region,” says Sean Geobey, a PhD candidate at the University of Waterloo, looking through the vintage, wooden window frame and across the fields of Waterloo Region. The sun is setting, pushing streams of orange and red light through makeshift, stained-glass windows. The nostalgia of every passenger who once rode the ancient locomotive is alive in this train car.

Of course, all of this is broken by a man dawning a horse head, running down the junk-mail filled aisle, followed by a rockabilly, trumpet-toting band of merriment and 250 of Waterloo Region’s best friends – singing, laughing, swaying, and imbibing. This is Steel Rails Sessions 2014.

I’m acting as a roving reporter, trying to document the duality of this locomotive and I’m flushing with a little panic about how I’ll record the thoughts of 250 passengers when the entire train boasts the blurts of a tuba, and every patron is crowding the aisle that is no wider than a newspaper.

The train has been rolling – St. Jacobs bound – for about fifteen minutes, Geobey and I are still sitting in a quadrant of seats with two other passengers who have managed to navigate the billowing cars well enough to return with a few cans of beer.

“The line was getting crazy, so we grabbed a few,” one of them says, explaining the tall cans cradled in her arms.

I worry about the sound quality of my tape, whether or not the laughing of our temporary neighbors or the fizz spurting from the shaken beverages will interrupt my interview with Geobey. Pushing the shotgun microphone closer to his face, I ask him about his past experiences on the train.

“I’ve been to Steel Rails before – there’s been some wild stuff, like snakes! And one time we sang ‘Hey, Jude,’ all together as a group,” Geobey says. That warm, orange light still pushes through the window, washing nostalgia across more than just the train, but across its passengers, too. Geobey is laughing now.

“Yeah, that was definitely my favourite memory so far.”

Before I know it, Geobey is swept into a conversation with our neighbours, the cans in hand now a little lighter. I know that my first attempt at a traditional interview on the modern art party is over. I rise from the red, material bound business car’s seats, tripping over both people and sale flyers that line the floor.

The train’s traffic has smoothed out by now. People seem to be learning how to move efficiently, two lanes of people coming and going, shuffling between the cars. I’m pushing past bars and actors clad in outfits of old. One sports an eye patch and introduces himself as The Baron, he insists on telling me about the lack of integrity held by the woman in red – The Countess. Passengers run to him with a message to deliver.

I practically throw my microphone into the conversation with hopes of picking up the nuances of Steel Rails.

“She told me you killed her cat!” someone says, as if divulging the most delectable kind of gossip.

Surprised at the ease in which they interact with the theatre-based installment, I record the rest of the conversation, trying to catch snippets as their voices escalate in excitement. I know the sound will swell beyond intelligibility when I play back the tape.

I move further down the length of the locomotive, ducking beneath appetizers that seem to fly between grabbing hands. As if a heavy door is opened, light, a breeze and noises, new noises, ones from outside the train, surround me. Yes, the only car with windows that open. Warm, sprawling bodies cover the olive-green, leather bound seats. Moving through with my microphone on, I’m excited for the ‘B roll’ – a niche term for the sounds I hope to find traces of the Steel Rails experience within: flashes of conversation, laughing friends, small talk between strangers.

Just as my recorder is reaching a minute of this tape, the train comes to a halt. With the beginning of the halfway party in St. Jacobs, I say goodbye to that golden audio footage as passengers push by me and scrape against my microphone to see what waits beyond the train.

A frantic dash of dozens of volunteers begins. As electro music from the pop-up party space wafts through the train’s windows, the installations get a facelift and prepare to return to the station.

A crowd even more rambunctious than the one that departed, boards the train. Round two. My last shot at a suitable feature-length interview.

The final car is no exception to the boisterous energy, a man belts the high notes of his youth into a Rock Band microphone.

Michael Kates, a recent graduate from Wilfrid Laurier University, watches from the corner with friends as I approach.

“It’s just something so unique for a Friday night in Waterloo, something different than anything I’ve been to,” Kates says, obliging my request for an interview. “But we’re all in it together.”

With that, a drum solo explodes, as do the newly established fans’ cheers and I know the sound levels for a longer interview are beyond salvaging.

With Kates’ final words in mind, I tuck my recorder into the purse and makeshift mic-bag slung across my shoulder. I turn to look down the narrow aisle spanning all six cars of this interactive, inexplicable, interdisciplinary modern art display that’s chugging through the region.

Professional and student, young and old, modern and heritage, this duality can’t solely be captured on tape. Returning to the airy car with green banquets, I find a seat with new friends and old and experience the ride for myself.