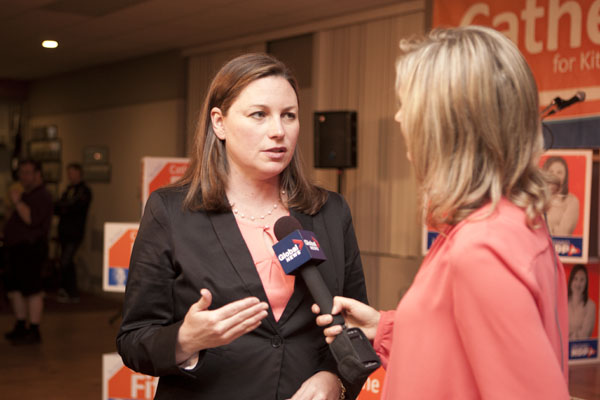 Catherine Fife was only in office for little over a year-and-half before she had to go knocking on doors again. As the winner of the Kitchener-Waterloo byelection in September 2012, the New Democratic Party incumbent somewhat felt she wasn’t validated yet as the Member of Provincial Parliament for Kitchener-Waterloo.

That feeling changed the night of June 12.

“Byelections feel very different than general elections, so I felt validated by the support of the community and I was very pleased to get a second mandate to the represent the people of Kitchener-Waterloo at Queen’s Park,” explained Fife, who was re-elected in Ontario’s general election, a couple weeks later.

Widely regarded as one of the closest three-way races in the province, Fife overcame two strong opponents in the K-W riding: Liberal candidate Jaime Burton and Progressive Conservative candidate Tracey Weiler. Fife finished with around 37.5 per cent of the vote, with Burton receiving 30 per cent and Weiler getting 26.
The plan for Fife, however, doesn’t stray too far from what it was when she took over after Elizabeth Witmer, the PC MPP in K-W for 22 years, in the late summer of 2012. Issues such as two-way, all day GO service between Toronto and the Region, as well avoiding the privatization of healthcare are still at the top of her list, she said.

“I think I’m going to follow the same pattern that I have always followed as a politician, and that is to remain engaged with the community and to bring forward the issues that people care about in Kitchener-Waterloo,” Fife added.

The circumstances, though, are different this time around.

Instead of the Liberal minority government that Fife briefly experienced before, she’ll now be going up against a Liberal majority under the leadership of Ontario Premier Kathleen Wynne.

She said the first challenge for her is going to be the proposed Liberal budget, which she referred to as a “campaign budget.” Fife also defended Andrea Horwath’s decision to trigger an election a couple months ago by rejecting the Liberal budget.

“It’s still not a budget that is in the best interest of the people of this province, so I stand by that decision,” Fife said.

Fife said that her support started to trickle in from non-traditional areas such as the suburbs outside the core of Waterloo. And as she did before, she gained that support by knocking on doors.

“What I heard at the doors was that people liked that I brought attention to some of the key issues that were affecting this riding — to transit, to the environment and to youth employment,” she said. “In general, people felt that I was doing a good job.”

Furthermore, Fife felt that the K-W community places more of an emphasis on the individual candidates rather than the parties they represent — a dynamic she said also contributed to her success in this general election.

Fife, along with all the other MPP-elects in Ontario, were sworn into parliament on July 2.