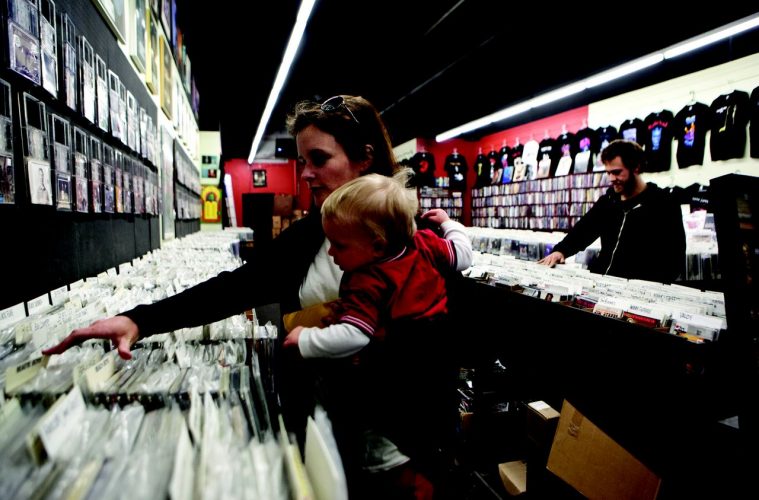 To embrace feelings of nostalgia and for the opportunity to buy one-of-a-kind records, the regions’s music lovers will be heading to local stores this month to indulge in Record Store Day

It’s a quiet Saturday morning and Encore Records in Kitchener is, for the most part, empty. Despite the soft warble of Louis Armstrong in the background, there is a palpable stillness to the place, a quiet air of anticipation. Of the four people in the building, one sits behind the counter, nursing a cup of coffee and organizing merchandise. The other two are with me, out amongst crates and crates of vinyl records. The tranquility of the morning is enhanced by the steady rhythm of the soft thwap LPs make as they brush against each other.

There is an unmistakable nostalgia that accompanies buying music on vinyl, probably because most people consider it to be outdated and irrelevant. But hardcore audiophiles swear by the sound, and events like Record Store Day are bringing the medium back into the eye of the music industry. “I’ve been here since 1981 and I’ve seen the demand for vinyl ebb and flow,” says Encore Records owner Mark Logan, “but LP’s are coming back in a big way, and events like Record Store Day are certainly building that momentum.”

The brainchild of Chris Brown, head of marketing at an independent record store in Portland, Maine called Bull Moose, Record Store Day has taken place the third Saturday of every April since 2007 and is a celebration of independent record stores everywhere. The concept is simple. Artists from around the globe put out collectible, one-of-a -kind records that are only available on Record Store Day.

These records can be anything from reissued 12” LPs to rare 7” singles. In turn, these records are only available in independent record stores, which the official website for Record Store Day strictly defines as, “a stand alone brick and mortar retailer… whose product line consists of at least 50% music retail [and] whose company is not publicly traded.”

While the availability of releases here in Canada is smaller than down south, Record Store Day is certainly taking off. Logan has been involved since day one and has witnessed the event’s growth first hand: “The first year was pretty dismal. Though there was tons of promotion and hype, we were only able to get about five per cent of the product that was available,” he recalled. “Each successive year we’ve been able to get more though, and each year it gets bigger and bigger. Last year there was a lineup outside the store.”

This interest in vinyl is being driven by a young, hip crowd, most of whom were born after the invention of the CD. “Yeah, older folks are dusting off the turntable and bringing their crate of records out of the garage and saying, hey, this sounds pretty good, but if it wasn’t for the hype of the university students, they probably wouldn’t have given it any thought.” Charles Janzen, co-owner of Orange Monkey in Waterloo, has begun to notice the youthful demographic more and more: “Two people came in today, separately, and both had just gotten turntables as birthday presents. They must have been about 19 years old and neither of them had ever owned a single record before.”

Many stores have special events or host live performances with the intention of getting people off their computers and interacting with music in a physical way. This year, more than 450 limited edition records will be made available world wide (over 160 locations in Canada alone) and include unreleased music from David Bowie and Bob Dylan, as well as reissues of GZA’s Liquid Swords and The White Stripes’ Elephant.

It helps that the bands and labels releasing records are promoting themselves in a technologically savvy way. It’s becoming common practice to insert a CD or a coupon for a free digital download into the record sleeve, allowing the listener to have their proverbial cake and eat it too.

Here in the Kitchener Waterloo area, both Encore Records and Orange Monkey will have a selection of RSD records available, but neither Logan nor Janzen know which ones they will be able to get in as the distribution of these much anticipated releases are done through random draw, meaning a record store can order specific items but isn’t guaranteed to get them. Doing it this way not only helps create fair availability, but it also encourages people to come out and take part in RSD. The only way to know what your local record store will have is to head on down and join the fun.

And rightly so. Hunting through rows and rows of records is all part of the experience and makes vinyl engaging in way that pressing play on an iPod isn’t, something Janzen is quick to agree with; “You want a nice sound? You want a great thing to do at home? Pop a record on. There’s nothing like it.”