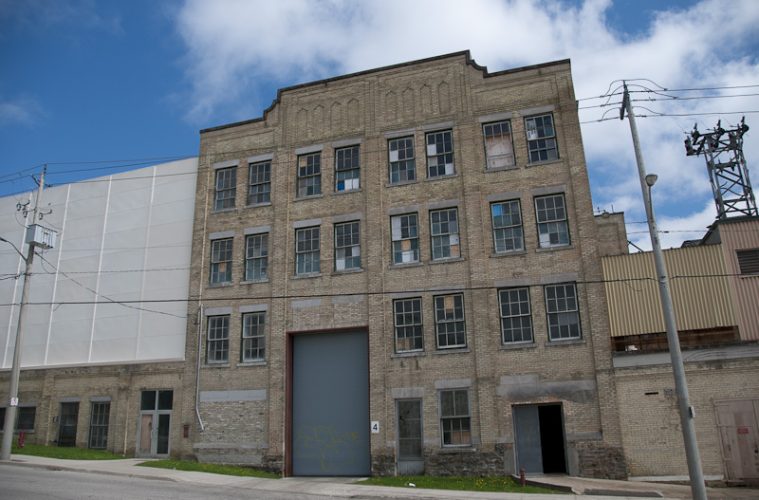 PHOTO COURTESY OF THE BREITHAUPT BLOCK

What did it used to be?

Back when Kitchener was better known for industrial factories than tech start-ups, the Briethaupt Block was home to several different factories. During its long history it housed a rubber factory, a tannery and an automotive parts factory.

In 2009 the buildings were purchased by Dave Gibson, the CEO of Perimeter Development Inc., the corporation responsible for the revitalization of Waterloo Town Square. In a 2011 Globe and Mail article, Gibson told the paper he believed in the Breithaupt project because of its proximity to the GO station and “the tech sector’s appetite for ‘cool’ spaces.”

Development of the buildings has started quickly. Building A, the largest of the six buildings that make up Breithaupt Block, is awaiting a tenant who can support further renovations to the structure. “It’s well enough built that that we can add three floors to it,” said John Lind, a Colliers International sales representative who is one of the real estate agents selling space in the Block. “If it was someone who needed 60,000 or 80,000 sq. ft. we could add floors to it but we need direction from the tenant.”

The other buildings are almost move-in ready, with only small adjustments left to be made. Proposed renderings of the buildings show wide airy office interiors with courtyards outside for recreational or office use.

The first five tenants for the block were announced in early October. They include BDO Canada Financial Services, a financial consulting firm; Lesley Warren Design Group, a local graphic design agency; Dillon Consulting, a consultation firm to both the private and public sector; Associated Engineers; and Workplace One, a boutique workplace for the self-employed.

“There’s almost 100,00 sq. ft. of space to go,” said Lind. While they’ve had a lot of interest, he couldn’t specify who has been sniffing around the Block. Also still up for grabs is Building A, which requires an anchor tenant. Facebook was rumoured to be interested, as was Google, which already has an office in the nearby Tannery building. “I’ll just tell you that a lot of people have looked at it and we haven’t tied anybody down yet,” said Lind. He did however point out that the other big player in Kitchener right now is the fast-growing Desire 2 Learn, an education-based tech start-up. “They’ve expanded more than Google.”

When will it be finished?

Very soon. Essentially, developers are just now putting on the finishing touches and awaiting demands from future tenants. “The landlord quoted me at $30 million to get it up to speed,” said Lind. “It’s been an enormous effort. We’ve been working on if for two and a half years.” Looks like that effort will soon be paying off.