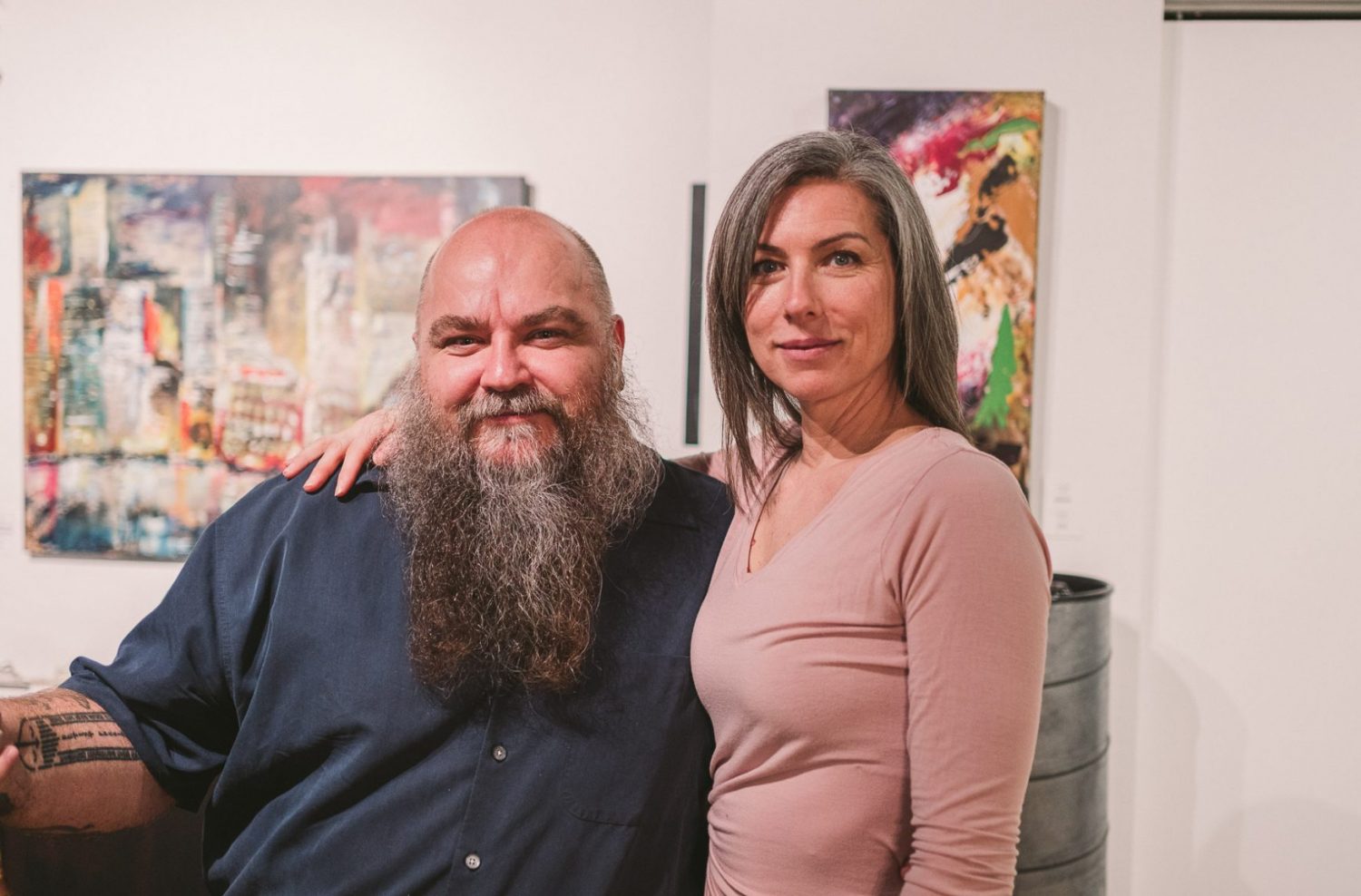 What does it take to be successful as an artist in the region?

Ralf Wall went from a hobbyist painter working at Sun Life during the day, to a wildly successful full-time professional artist overnight. He credits his growth to the mentorship of Jen Gough of Mind’s Eye Studio, and the help of Globe Studios and Homer Watson Gallery.

Wall, who was born in Brazil, but raised in Kitchener from the age of one after his Mennonite family immigrated here, has found tremendous support in the art scene over the short time since becoming a full-time artist.

“I only came on the scene five years ago. I’ve always been an artist, but I didn’t go full time until then,” Wall said.

After losing his job suddenly at Sun Life five years ago, his wife encouraged him to reach out to a long-time friend and successful veteran artist in the Region’s art scene — Jen Gough.

“So I said, Jen, can I pick your brain? Give me some advice. I’m just starting out. And I pretty much did everything she told me to do. And then, you know, things, my career just kind of skyrocketed. It was just amazing. I did a lot in a short span that a lot of big-name artists who have been around for 20 years [have not],” Wall said.

Gough owns Mind’s Eye Studio, a gallery space that features a new local artist reception every month. It was Wall’s turn to shine with his own show at the gallery called Spirit Within last month showcasing his layered abstracts.

Although Gough has been working as an artist for over ten years locally after quitting her career in retail. It was a long road to being commercially successful and she’s learned a lot along the way.

“For the first couple years, I just sort of splashed around and figured stuff out. And then a style started to emerge. And I sort of started to find my footing and my creative inspiration,” Gough said.

From there it was all about getting herself out there and community building to spread the word and promote other artists like herself just getting started on the scene.

“When I first was starting to get into the arts and when things were first starting picking up [in 2006/2007] and all that networking was happening. There was a group of us who sort of started that #KWAwesome to promote it,” Gough said.

Gough describes the arts and culture community in the region as a ‘vibrant underground river that nobody knows is there’ but with some digging can be found.

“What we are doing is trying to make that river more available for everyone to see that it was there….to help get the word out,” Gough said.

These days Minds Eye Studios and Gallery serves as a hub for emerging artists on the local scene and an affordable space for people to teach and practice yoga. Gough hopes that offering yoga for just $10 a class on the weekends will help others find some inner peace and happiness like she did when going through her depression.

“The depression kind of snuck up on me and then I lost all my inspiration. And I wasn’t able to work anymore. And so that put me in kind of a funk for almost three years. So then I found yoga. I felt like a bit of a weight had been lifted. The more I went, the better I felt,” Gough explained.

So what was the advice and mentorship Gough gave to Wall that led to his artistic success?

“Be seen everywhere. Don’t let people forget you. But don’t be a salesman. Just be at every event. Enter every show that you can. If someone asks you to be part of something, say yes if you can do it,” Wall revealed.

When asked what it means to have always been an artist, he harkens back to school days when a teacher picked one of his paintings for an art competition at Homer Watson Gallery.

“It ended up at the Homer Watson at the end of the show and I remember saying, one day I’ll be a real artist and I’ll have stuff here,” Wall said.

He now teaches watercolour landscapes and acrylic abstract painting classes to adults at Homer Watson Gallery on a regular basis.

Wall is also among more than 30 artists working out of Globe Studios at 141 Whitney Place, a not-for-profit organization providing a safe and affordable studio space to practising artists in the region.

Wall talked about how important it is to stay on brand so people start to remember who you are. He recounted the story of Bob Ross once saying that if he got rid of his signature afro hairstyle, he would simply become Robert Ross.

“So I’m known for the big beard and the shorts. I wear shorts all the time.”

Why does Wall paint watercolour landscapes?

After taking a watercolour class with a Dutch WWII veteran who described life in a concentration camp, Wall painted a scene from his imagination of his teacher’s experiences. 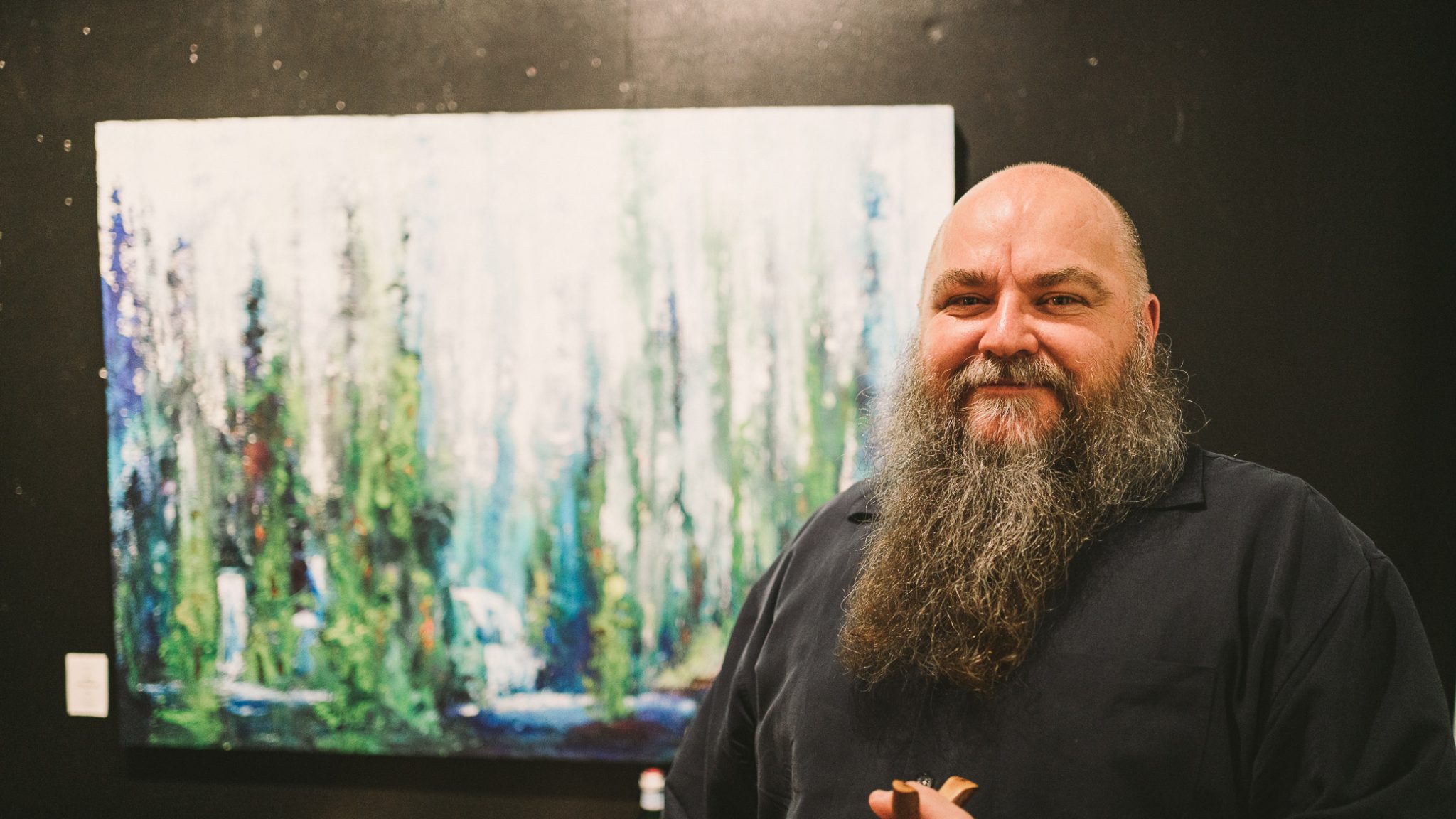 The realization that art is about storytelling.

“That story just really stuck with me and I still have that painting hidden away here. And this is not flowers and fruit. I can tell stories with watercolour. It was like he woke up something in me,” Wall said.

At that time, Wall was primarily doing fantasy based art. His watercolour teacher told him if he wanted to do realistic landscapes to go outside to learn what it looks like.

“Because of him, I did that. So now I paint primarily outdoors, almost everything. Every landscape you see is probably done outdoors with very few exceptions,” he said.

And Wall has so many stories from those experiences. That time he forgot his brushes and painted with sticks and leaves. The time a dragonfly landed on his brush. That time a bird came to sit on his easel. Animals coming to watch him in action.

“It’s pretty bizarre. I love it. But it only happens when you are in the flow. Yeah, all that glitters. There’s nothing else.”

Last year, Wall took part in a local Kitchener company that invites artists on an Art Safari in Kenya.

He painted a watercolour 1000 feet in the air from a hot air balloon of the sunrise over the Serengeti. While in Kenya, Wall also got the opportunity to teach a painting class to local children who impressed him with their talent. They asked when the bearded man is coming back. He’ll be going again this year.

To paint with Ralf Wall, go to the Homer Watson House & Gallery website to register for one of his ongoing courses or follow him on Instagram @Raflar_The_Artist to find out more.

*A previous version of this article misattributed quotes. “So I said, Jen, can I pick your brain? Give me some advice. I’m just starting out. And I pretty much did everything she told me to do. And then, you know, things, my career just kind of skyrocketed. It was just amazing. I did a lot in a short span that a lot of big-name artists who have been around for 20 years [have not]” was said by Wall and not by Gough as previously stated. “Why does ____ paint watercolour landscapes?” Was misattributed to Gough and was referring to Wall’s art. The article was corrected on March 4, 2020 however, the print version still has these errors.