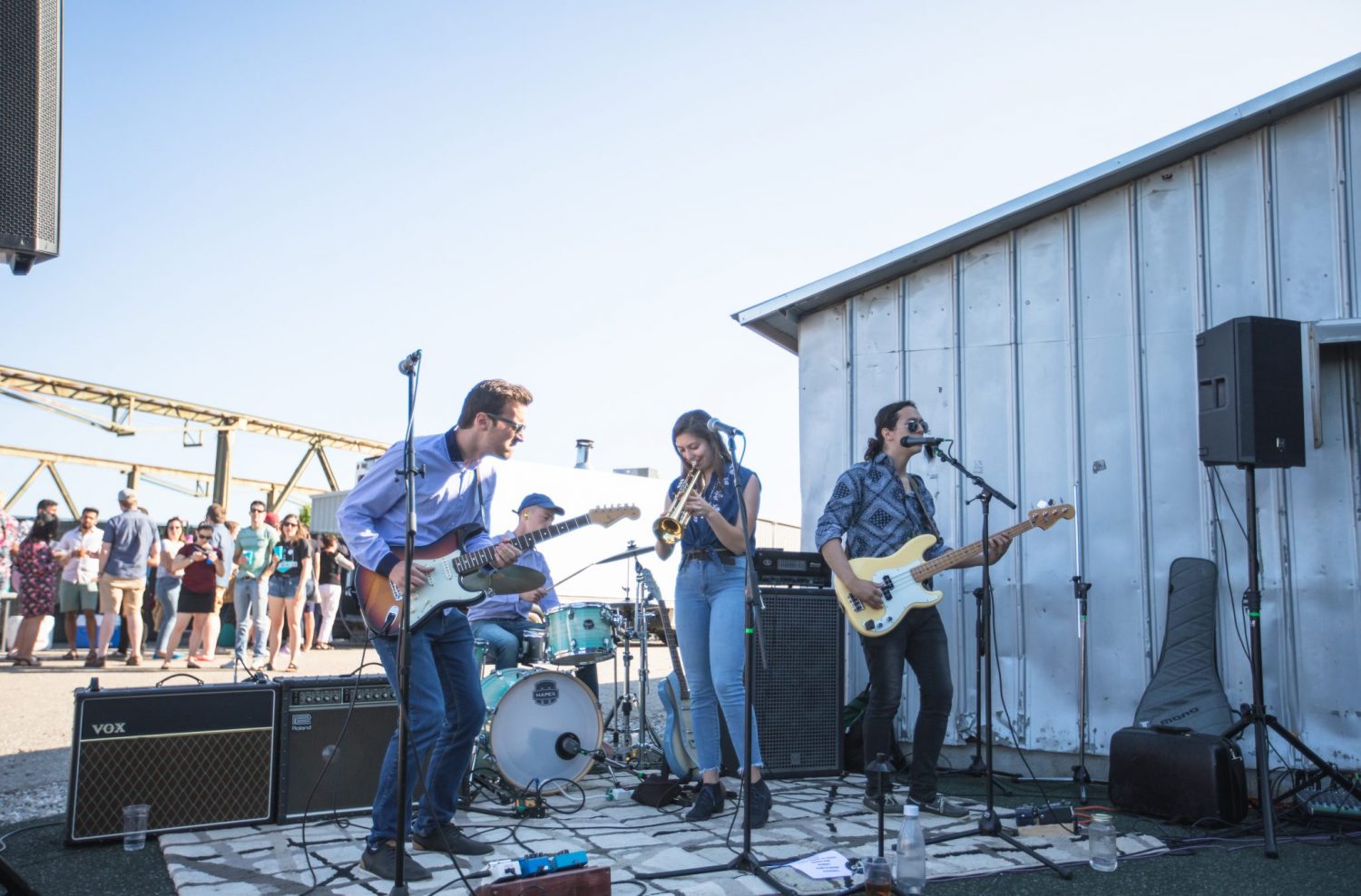 Four-piece KW-based band 12 Mile Island is on the rise after a busy year of gigging around Southern Ontario. Characterizing their music as indie rock with elements of funk, the group is made up of lead guitarist Nic Nolet, lead singer, trumpet and guitar player Laura Sones, drummer Dan Nash and bassist Dan Corrigan.

“As a group we’ve been playing together since January 2018, and we started playing live in December of that year,” said Nash.

“We’ve always been based in Waterloo, but we’ve played a lot of shows around Hamilton, Niagara and Toronto as well. We found our first gig through Toronto’s Cats Cove Media Group which is run by a friend of ours and we’ve played a few shows with them since,” Sones explained.

Today, the members live together in the same house, which has allowed them to really focus on their music and develop a distinctive sound they can all jive with. The band is now popular within the local arts and culture scene for writing and performing their lively, up-beat tunes wherever the opportunity arises.

“It actually took us a while to really break into the KW music scene, but we were lucky enough to play a Sofar Sounds Waterloo show this past January and it was really pivotal for us,” Nolet said and the band agreed.

“Being able to call ourselves a Sofar Sounds featured band kind of changed the game for us, but the best thing that came out of that night was the connection we made with the chapter’s lead, Amit Mehta. At the time, we were still trying to figure out our sound and he told us that we really just had to be ourselves and as soon as we realized that, everything started to come together.”

Since then, Mehta and his team have re-branded to Good Company Productions, hosting a wider variety of shows in the community.

“You can tell how hungry people in this city are for a sense of community, for live music, for an art scene … Amit and his team have really taken charge of fostering that environment in Waterloo [Region] and we’ve loved being a part of it.”

In the past few months, they’ve highlighted several Good Company shows including those at the Kitchener Market, Waterloo Park, Waterloo Public Square and Trillium West. Beyond that, you may remember them from plenty of local shows at venues like Maxwell’s, Starlight, Chainsaw, Churchill Arms and Lot 42 during Steel Rails 2019. Recently, they’ve enjoyed playing intimate, underground shows at a modest new venue, The Mountanne Music House, as well.

The most exciting news for 12 Mile Island is that they’ve just released their first single, a catchy song called Lioness, which is now available on Spotify and Apple Music.

“As songwriters, our shows are like our focus groups. With some songs, there is a visible connection with the audience. Lioness is one that people always turn around for,” Nolet said.

To celebrate this milestone, they are hosting a release party on Nov. 15 at uptown Waterloo’s Hepcat Swing Studio with the help of Good Company Productions. Tickets are $15 and are available for purchase through their Instagram (@12mileislandband) or Facebook pages.

“We have this band where we all live together, make music and cook breakfast together … that’s kind of what we want to model at this release party. We want it to feel like we’re all cozied up in a living room … like you’re not showing up to a venue, but a home,” the band discussed.

As a committed and talented group, their hopes for the coming years are to eventually release an EP, continue playing live shows and plan a Canadian tour.

“We were lucky enough to find a group of friends that wants to dedicate this much time and energy to writing and playing music and this is the time of our lives that we can roll with that,” Sones said.

“As long as this keeps working for all of us, we’ll be doing it. We wouldn’t want it any other way.”