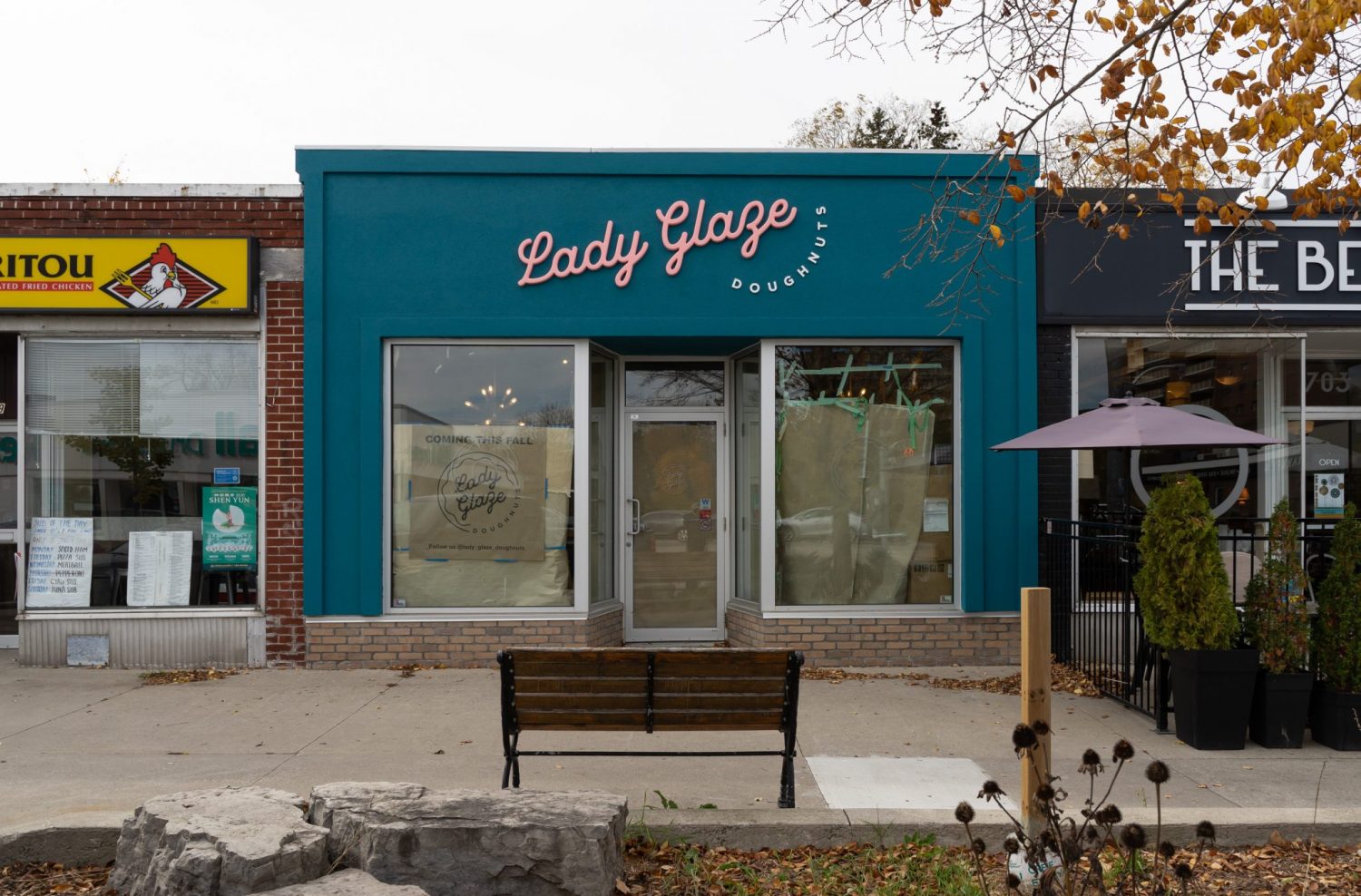 Lady Glaze Doughnuts will soon open in the property that once housed the Berlin Bicycle Cafe in Belmont Village.

The shop aims to create one-of-a-kind artisanal doughnuts, as well as vegan doughnuts, for Waterloo Region.

“We saw it more as a chance to get people eating a way that I believe in, in a product that is widely accessible to everyone,” said Mark Andrew Brown, CEO and co-owner of Lady Glaze Doughnuts.

Brown is also the director of food and beverage at Abe Erb Brewing Co., and was the executive chef at the Charcoal Group of Restaurants in the Region.

“It’s not starting a specialty macaroon cookie store, where a very select few know what that is … Doughnuts have that mass appeal,” he continued.

The doughnuts at Lady Glaze will be made from scratch and by hand, with fresh ingredients and no preservatives, according to Brown.

“[For instance], to make a red glaze it’s not going to be as easy as icing sugar, water, adding food colouring and calling it a red glaze,” he said. “One thing that we invested in was a vacuum sealer and two large chest freezers. At the height of strawberry season, we will be vacuum sealing and freezing bushels and bushels of strawberries. So as we want to produce a doughnut with a red glaze, we will make a strawberry puree as the base of that glaze. It will taste like a strawberry and will come from a strawberry.”

Lady Glaze is licensed and will offer alcohol options, as well as hot beverages, juices, and a milk program, that will offer chocolate and strawberry milk made from scratch.

According to Brown, Lady Glaze originally started out as an idea between himself and Rob Theodosiou, who is currently the President and CEO of Abe Erb Brewing Co, Settlement Co, and Grin and Grind Holdings Inc., around one and a half years ago.

“Doughnuts kind of ended up on the docket because he knew of my experience in the past — I’d been sort of overseeing two different doughnut concepts. As we talked about it, we just saw that hole in the market,” Brown said.

Six months ago, they brought on Trudy Koen as another co-owner.

“It’s super exciting. I think when you spend 15 years marketing software or technology products, it’s obviously very different to kind of all of a sudden start thinking about doughnuts. But different in a very fun and creative way,” Koen said, when asked what is was like getting involved in the KW food scene.

“There’s just so much opportunity to build a brand around this and we’re already really feeling it from the community that it’s something that people are excited about and that they could get behind. There’s lots of opportunity to try new things from a marketing perspective,” she said.

“I guess kind of tying it down to the origins of it being old fashioned and something from the past, but also flipping that on the side in doing it in a more edgy and modern way [sic],” she said.

Brown said his inspiration for the name came from the Moulin Rouge remix of the song, “Lady Marmalade.”

“I just liked that association and I thought: this lady can be making marmalade, why can’t she be making doughnuts?” he said. “I never thought about having it as a strong female type thing. It was more just kind of a coincidence.”

“When you come in, the first thing that you actually see is the kitchen producing everything behind a bit of a glass guard. So you see everything being produced right at the front of the shop, watching our bakers frying, glazing and topping all of the doughnuts … We’re quite excited to bring the open kind of bakery-kitchen [concept] to what we’re doing,” Brown said.

Brown believes that the shop is most likely to open between Nov. 11 – 18.

“We can fully see that light at the end of the tunnel,” he said.