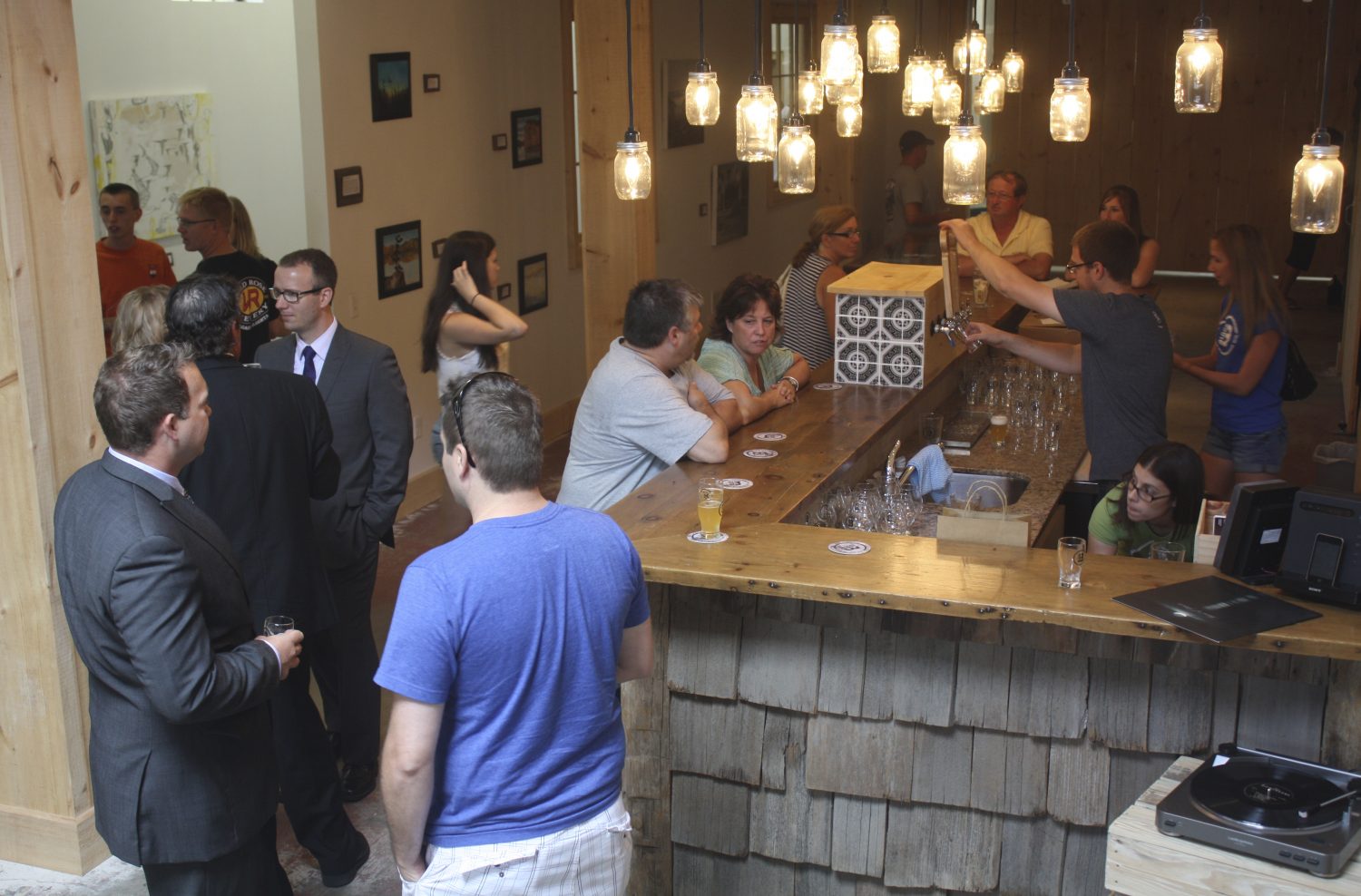 New brewery on the block

When a brewery sells out of beer, you know they’ve got a good thing going on. For the Block Three Brewing Company, that’s exactly what happened at their Labour Day weekend grand opening.

Located on King Street in downtown St. Jacobs, they opened their doors with no more than a Facebook page, a Twitter account, and the rumour mill. Armed with two brews — the King Street Saison and the Sugar Bush Brown Ale — they treated the public to free tastings and tours of the facility. On day one they sold out of the Saison, leaving just the ale available for the next two days, but nobody seemed to be complaining.

Behind the scenes at Block Three are three former accountants and one master carpenter turned brewmaster, and most amazing of all — not one of them is over the age of 30. Phil Hipkiss, Graham Spence and Derek Lebert were three friends who wanted to go beyond just tasting interesting beers to see if they could make a beer worthy of their monthly beer club social group. Enter Bryan Maher, already familiar with home brewing.

“One thing lead to another. We kind of decided to take the idea as far as we could without stopping” said Lebert, a former Laurier graduate. “We just said, ‘You know what, let’s just try to do it, and the second we realize we can’t, we’ll stop.’ Now we’re open.”

The opening of a functional brewery doesn’t come without a few setbacks, of course. Originally slated to open July 1st, there were issues with licencing and some equipment delays; not to mention the overall stress and understandable head-butting involved in such a major undertaking. But it all seems to have come together, complete with a funky tasting room featuring local art on the walls, quality carpentry highlights, and a record player that you can spin yourself (should the mood for Fleetwood Mac or The Arkells overcome you).

Block Three is currently on tap at six different restaurants in the area, with tentative plans to expand and no burning desire to be found in the LCBO any time soon.

Staying local is important to the Block Three brewers. They adopted the brewery name from an old term used to identify Woolwich Township, back before the influx of European settlers.

Locals, meanwhile, are excited to work with them. In the few short days they’ve been operating, they’ve already had several local businesses contacting them about cross-over promotions.

Block Three only has the two brews available at the moment, but they have plans for a variety of brews in the future.

“We have our King Street Saison right now and our Sugar Bush Brown, and we’re going to see how those go over. If people like them they’re going to probably be our two flagship beers,” said Lebert. “And then we’re always going to be doing a seasonal beer on our main tanks, and we’re going to plan on doing some one-off’s on our smaller test batches.”

The Saison is a Belgian style farmhouse pale ale, at 4.6 per cent alcohol content with citrus, pepper and coriander notes. The Sugar Bush is a darker ale, at 4.8 per cent, and as the name suggests, features locally acquired maple syrup that gives you a sweet kick at the end.

There are also plans underway for an Oktoberfest brew, a Christmas special, and they are looking to experiment with local fruits, like apples. Absolutely none of their brews will contain artificial flavours or preservatives.

“When you filter there’s a lot of flavours that actually come out of the beer and so we prefer right now to keep all our beers unfiltered. It makes a cloudy beer, but it’s definitely more flavourful,” explained Lebert. Future plans also include brewing cask ales (unfiltered, unpasteurized, uncarbonated) and barrel brews (beer aged in old whiskey, bourbon, or wine barrels).

Beers come in refillable growlers or by the bottle. Hurry to the brewery soon, as they keep selling out of beers, Block Three Brewing Company has set themselves up to be a local success.

Find out more about Block Three Brewing at blockthreebrewing.ca