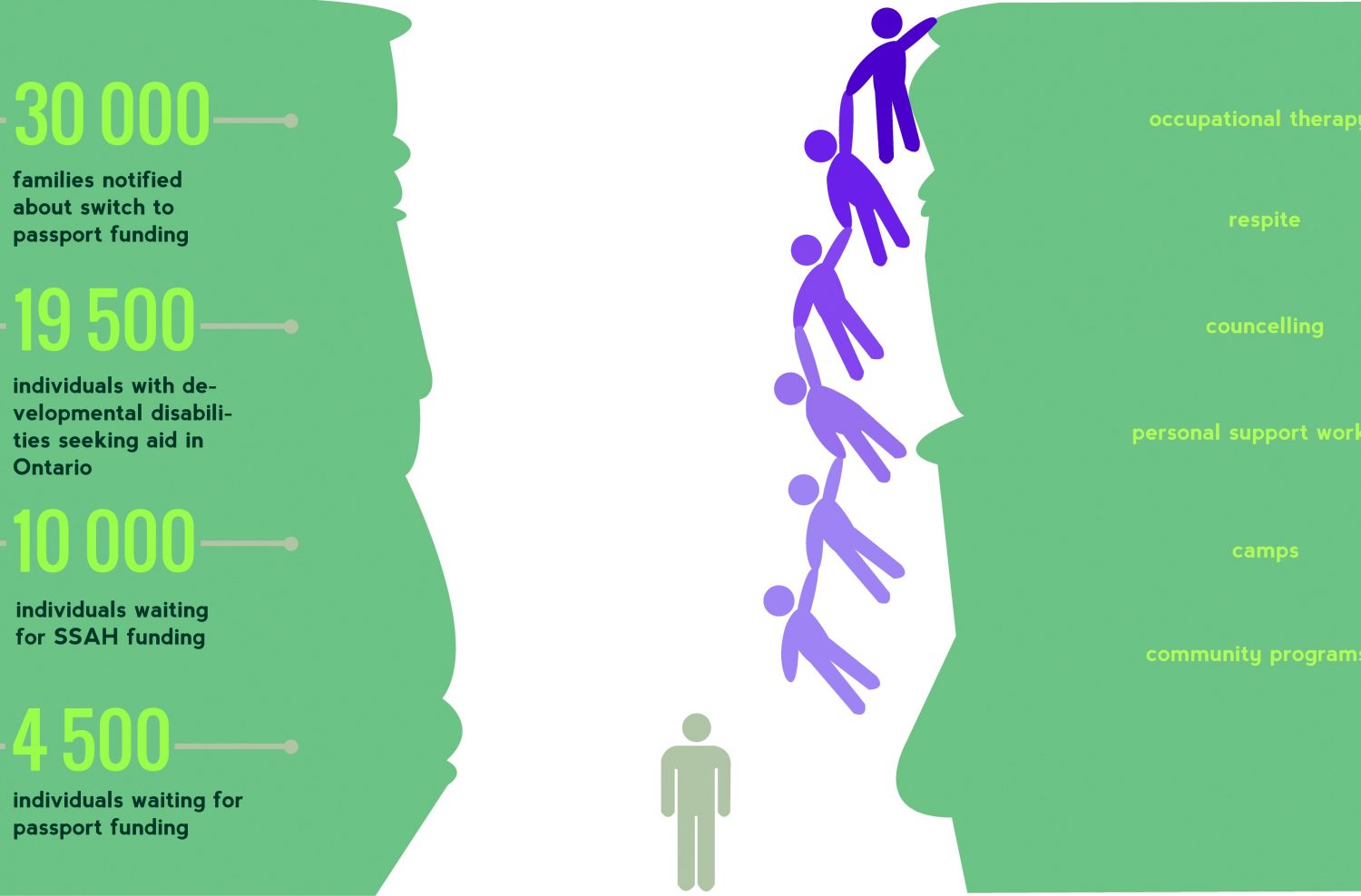 Brandon Morton sits with one hand behind his ear, fiddling with his already askew glasses. The other hand clutches a vibrant, green package of YuGiOh cards on his lap. Brandon whips his hand forward from behind his ear, stopping in the middle of his forehead with his index finger in a point — he’s decided on a new joke.

“Bob, Steve and Fred all open their lunches while sitting on a construction site beam,” he begins, leading into the improbable fate of three construction workers.

“Brandon loves puns,” says his father, Mark Morton. “Right after he was diagnosed, he said to his papa, ‘I have aspergers, can I have fries with that?’” At 17 and a half, one wouldn’t expect Brandon or his parents to address their son’s developmental disability with such good humour.

In six months, the Province of Ontario will no longer consider Brandon a child. His funding from Special Services at Home (SSAH) will be halted, replaced by an application for funding from a new program, numerous assessment appointments and a waiting list. This funding gap — a side effect of the switch from SSAH to the new Passport program — has created undue stress for an estimated 30,000 families.

John Milloy, local Liberal MPP and previous Minister of Community and Social Services, was a keystone in sparking the Passport program. He explains the initial purpose for the revised funding process.

“We had a patchwork of services across the province…what we’ve put in place is very clear, very transparent, and is making sure there are common standards across the board,” says Milloy.

The Passport program is the provincial government’s solution for support funding for individuals over 18. Families and individuals with developmental disabilities will use the funds provided through the program to help provide support and opportunities to help overcome various hurdles resulting from their disabilities. With this switch individuals turning 18 who receive SSAH will be cut off and will have to apply for the new program to provide the same services. This switch however has proven less than seamless and many individuals have found themselves without funding and on waiting lists instead.

The Ministry of Community and Social Services notes that the waiting list for Passport funding hosts approximately 4,500 individuals. This staggering number is causing outrage and anxiety amongst families.

Financial aid for individuals with developmental disabilities goes toward funding therapy, personal support work, medication, and other groups or community involvement; a list that, without government funding and a strong benefits plan, can quickly become costly.
“95 per cent of the prescription drugs for Brandon are paid for. If we had to pay for that out of pocket it would be probably $12,000 a year,” Mark explains.

Complicating the issues with the Passport program is that those who remain in school will not be eligible for funding despite being 18 or older. “A lot of these individuals will be staying in high school until the age of 21,” explains Cameron Dearlove, a Coordinator at The Family Centre and previous NDP candidate for Kitchener Centre. Because public high schools provide some support for their students, individuals with disabilities are less likely to be able to access services under the Passport program. “The problem is that you’re not switching from one to another, but switching to a waiting list. It’s not streamlined, it’s a gap,” Dearlove adds.

“Eligible applicants will then have their service and support needs assessed, and will be prioritized based on the level of need of everyone waiting for services, and balanced against available resources,” says Ted McMeekin, Minister of Community and Social Services.

‘Available resources’ are often little more than extended test writing time, a scribe and the shared support of an educational assistant. Despite the intent to offer equitable funding, an attention-grabbing gap is created by the wait between 18 and 21, as well as a possible three-year wait upon finishing school. In this case the so-called gap becomes more of a gorge.

For Brandon, life would become much more complicated without the financial support he receives from the Ontario government.

“I would probably have food on my face all the time. I wouldn’t be speaking too well,” he starts, fiddling with his still askew glasses. Behind the lenses, Brandon’s eyes blink rapidly, as he mouths the words, trying to find the right one for his sentence. “I wouldn’t be aware of where my body is.”

Therapy and support expenses are the Mortons’ primary concern for Brandon’s lifestyle after 18.

“It’s upsetting at this point for me to just wonder what he is going to be doing in three years. We don’t want him to be sitting in his bedroom here at home doing nothing,” Mark begins. “I’m just about 50, I’m not going to be around forever.”

Like any 17 year old, Brandon craves steps of independence. Resembling a university student, wrinkled button up shirt and all, he dreams of moving to the bachelor suite, attached to the rear unit of his parents’ home. He hopes to go school for horticulture, or maybe for making websites.

“Apparently I’m too able. It is kind of a compliment, but it is kind of discouraging that I won’t be able to own my own house or pay bills,” says Brandon, acknowledging the challenges in attaining the independence. “Hardly pay rent maybe. Not be able to get groceries, or as much groceries. It is kind of like being in university or college.” He compares his situation with students who struggle to get by on student loans.

Few options exist for a parent supporting a child with a developmental disability. Depending on the severity of the individual’s condition, full time care can be required.

“I don’t think many people can do that: quit their job, go into debt or sell their home [to take care of a child],” says The Family Centre’s Dearlove. “And most families are so overwhelmed, they’re not going to be able to engage in advocacy after their child goes to bed.”

Dearlove and Subeer Bhandari, a group home worker, step into positions of advocacy where families cannot. Most recently, they have initiated a petition requesting that the waiting list for Passport funding hopefuls be eliminated and that those currently transitioning are grandfathered into the process.

Dearlove and Bhandari’s petition is largely based on a UN Convention, signed by Canada regarding the right to supports for the disabled on an equal basis. McMeekin argues that the Province of Ontario is upholding this agreement.

“Now, the same eligibility and application process applies to everyone applying for any form of adult developmental service. Everyone is assessed in the same way.”

The petition has reached over 4,000 signatures. Upon reaching 5,000, Dearlove and Bhandari hope to trek to Queen’s Park to present the petition alongside the families being affected.

Engagement and advocacy on a family level is second to sorting through the perceived increase in bureaucracy attached to Passport funding.
“The paper work is just mind boggling,” says Melanie Morton, Brandon’s mother. “Having to demonstrate that the funding went towards this service — on top of looking after 4 kids — that kind of administration gets really challenging.”

It has fallen to locally based agencies and support workers to help people deal with the switch from SSAH to Passport. However, it can still be a very confusing process for Ontario families.

The provincial government has tried to create a cushion for transitioning individuals. McMeekin explains: “We wanted to allow individuals and families time to plan and prepare, so we allowed a transitional period of one year in which adults formerly in receipt of SSAH transitioned directly into Passport.”

A series of letters and information packages, beginning in 2011, were sent to families during the transition process. It was not specified whether individuals turning 18 in the second and third round of transition to Passport received the same notice.

“When there are people on the other end who you feel are rooting for [Brandon], that is really rewarding,” says Melanie, reflecting on her own experience interacting with Brandon’s support services. “Dealing with an adjudication office in Toronto where you can’t meet the person, it doesn’t feel like we’ve got someone who is part of the team.”

Many are skeptical of a pass-or-fail system that applies to individual, complex cases.

“[The Province] functions in a very different way: ‘Here is our funding protocol, here is the assessment structure, either you fit or you don’t fit.’ It is not a flexible system,” says Melanie.

Flipping through the now open package of YuGiOh cards, Brandon reclines in the deep sofa, adjacent to his father. He moves his hand to the back of his head, and his eyes scroll to the ceiling, as he often does in conversation. He is still processing the possibilities of his future.

“It might be a little difficult because I won’t be able to have support in college or university, they let you do your own thing— like if you pass you pass, if you fail, you fail,” says Brandon, snapping a YuGiOh card of choice back between its peers before shutting the fluorescent case.

The Mortons expect that due to the new assessments, Brandon will not qualify for Passport funding. Furthermore, his high-functioning label makes it likely that he will be ineligible for Ontario Disability Support Program (ODSP) funding as an adult. Unlike SSAH and Passport, ODSP provides funds to support people with disabilities who cannot work as a result of their disability for basic living expenses such as housing and food.

“At this point in Brandon’s life, I don’t think there is any type of support or therapy that we wouldn’t pursue because of lack of funding,” says Mark. “What it does mean is that further down the road we may not have the savings that we would have otherwise.”

Approximately 30, 000 individuals, including Brandon, received letters notifying them of the changes to funding. Knowing of the challenge ahead, this army of near-18-year-olds emerged on the ledge of the impending gap. Fifteen thousand breached the hurdle and are now receiving funding. Still walking the thin and swaying bridge that spans the gap, 4, 500 find themselves on a waiting list.
Roughly 10, 500 are unaccounted for.