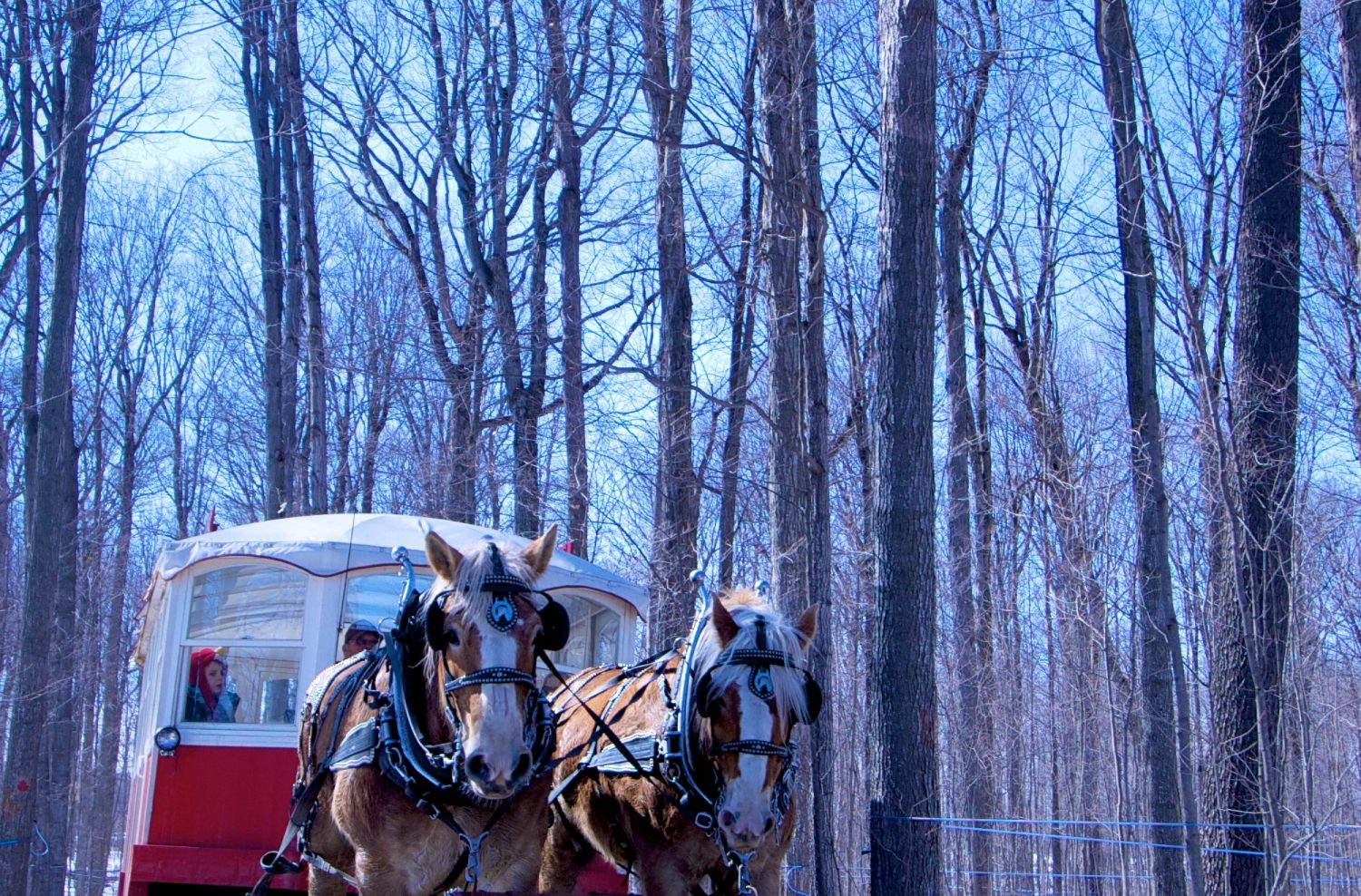 Walking down the aisle of a grocery store is a lot like walking down the street in a subdivision. Products arranged uniformly — like homes neatly spaced by the same amount of green grass and trimmed hedges — are organized for ease of access. It’s not a bad thing, like most modern conveniences having one place to stop and stock up for the week can be very helpful, but no matter how hard a marketing team tries to brand the bread aisle, it will never feel the same as your neighbourhood bakery. What’s missing is the personal connection to where the food comes from and the people who make it. In this region finding that connection, even in the early, still frozen, weeks of spring is as easy as, well, pancakes.

“Where does maple syrup come from?” ask’s the St. Jacobs Horse Drawn Tours guide. It’s getting late in the afternoon, and she has probably asked this question ten times already today. This doesn’t impede her enthusiasm which infects the small group of spring-ready attendees.

“Trees!” shouts a sea of bundled-up children near the front of the group. Everyone is clad in scarfs and mud crusted boots, the ground is soft despite the crisp air.

“You’re right! From a tree! What kind of tree?” the tour guide responds with the same excitement as a motivating camp counsellor.

“This tree,” squeals one little girl pointing nondescriptly at the entire forest in front of her.

The group of ten to fifteen people standing behind the sugar shack are surrounded by maple tress of various ages, the light blue plastic sap lines snake through the trunks catching
the bright sun shining through the branches. It’s the last day of March break and probably the best weather the region has seen all week. The forest, looking thin without its foliage is fuelled by pure maple sap, flowing through the intricate root systems like blood.

Maple syrup isn’t often regarded in the same light as tomatoes, cucumbers or cabbage but in this region it’s the first fresh food to be harvested as winter subsides and gives way to a new growing season. Waterloo Region is littered with sugar bushes, the climate being well suited for the maple tree.

Every March, St. Jacobs Horse Drawn Tours opens Matthew Martin’s forest up to the public allowing the region to experience the family farm. They’ve tapped into the rich cultural history of maple syrup production spanning present day methods all the way back to when the first settlers learned about the sweet sap from Canada’s indigenous peoples. Step into a red trolly of old, reminiscent of a San Francisco street car, and a pair of draft horse will pull you out of the city and into the region’s heartland.

For four generations, the Martins have been producing maple syrup just outside Waterloo’s city limits.You can sense the urban encroachment of a city bursting at the seams as you turn down Apple Grove Road towards the farm. Much like many of the streets on the outskirts of the city one side is field-laden, awaiting this year’s crops. Modern developments flank the opposite side and manicured landscaping fill the trolly’s dusty windows. This region seems to be constantly balancing its rural heritage with its urban intensification.

The pace of this progress juxtaposed between the St. Jacobs Farmers’ Market where the tour begins and recent road closers and construction prompted by LRT. Our driver jokes with the young children at the front of the trolly as he drives the large Belgian horses into the farm. Dressed in navy overalls and dirty boots he looks like he might have just been inspecting the sap lines. He’s been driving horses for this tour 9 years and counting.

“Every year it’s different, this year it started mid March,” says our driver, referring to the start of the season. Predicting when the sap starts flowing is something of a dark art. Part science, part luck it’s mostly determined by the climate, the cold nights and warmer days of early spring where the temperature rises above zero during the day and dips below freezing at night are ideal.

As the horses plod along pulling the trolly down the gravel farm lane the forest cuts a transition between the muddy snow laden fields and the blue sky. The children are excited all talking at once, even the adults in the group eagerly peer forward, looking to catch a glimpse of their destination.

The Martin’s tap about 1700 trees, each with between one and three taps depending on the age of the tree. The sap that drips from each of the 2600 taps is clear and could easily be confused with water. Upon arrival at the sugar shack, tour guides pass a bucket of fresh sap around for attendees to sample. It tastes like stale water. In order to turn the sap into the sweet, sticky liquid you pour on your breakfast, it’s heated, boiling off the water leaving the sugar behind. It takes about 40 litres of sap to make one litre of syrup. This used to be done
by putting hot rocks into a hollowed out log full of the liquid. After three days of doing this you have syrup. Mechanization has modernized maple syrup production, but the general technique essentially hasn’t changed for hundreds of years.

Today the time it takes to turn the sap to syrup is shortened by using reverse osmosis to remove two thirds of the water before the sap is heated, concentrating the saps sugar content before the evaporation process begins. Once the sap is run through the evaporator, it’s syrup.

Another question echoes through the group in the same excited tone, now standing amongst the metal machinery inside the building where the sap lines lead.

“Does anybody know what the three grades of maple syrup are or what grade they buy?”

Pale sunlight streaming through the window illuminates several bottles along the ledge containing the different shades of syrup. The poster on the wall gives the answer away.

“Light, medium and amber, does anyone know what the difference is?” she asks not skipping a beat.

“It’s about how you boil it down right?” suggests a mother standing with her daughters.

“The thickness?” offers someone else.

“It’s all boiled the same amount of time, and it’s all the same thickness, the difference is when it was collected”, states the tour guide.

The lighter syrup is collected mid March and the dark is collected mid April. Sap travels up from the roots of the tree feeding it with nutrients much the same as the blood in our veins. As the ground thaws the bacteria levels change, which in turn alters the colour of the sap and intensifies the maple flavour after boiling. Connoisseurs start light when sampling syrups and proceed to go darker as to not loose the subtleties between each grade.

With a plate of fresh, fried pancakes from what can be aptly described as a sugar shack, attendees get to taste syrup produced on the Martin farm. Sitting in a wooden shed with plastic cloth-covered tables, it’s easy to forget that five minutes away there’s an outlet mall. For the families exploring the farm, this isn’t just about purchasing a product, it’s about experiencing the cultural heritage of the region. And just like the sap in the trees, tradition is the lifeblood of Waterloo Region, feeding the curiosity of the next generation as well as their stomachs.