Print-making, sewing, 3D printing, plaster casting – you name the trade, and Agnes Niewiadomski (pronounced Nev-ya-dom-ski) has probably tried and mastered it. Niewiadomski is the region’s foremost female maker and one of the masterminds behind Kitchener’s yearly Maker Expo.

So what exactly is a maker? Niewiadomski has given this some thought, and when I met up with her for a coffee to discuss her inspirations and upcoming projects she took me on a verbal tour of KW’s maker scene. 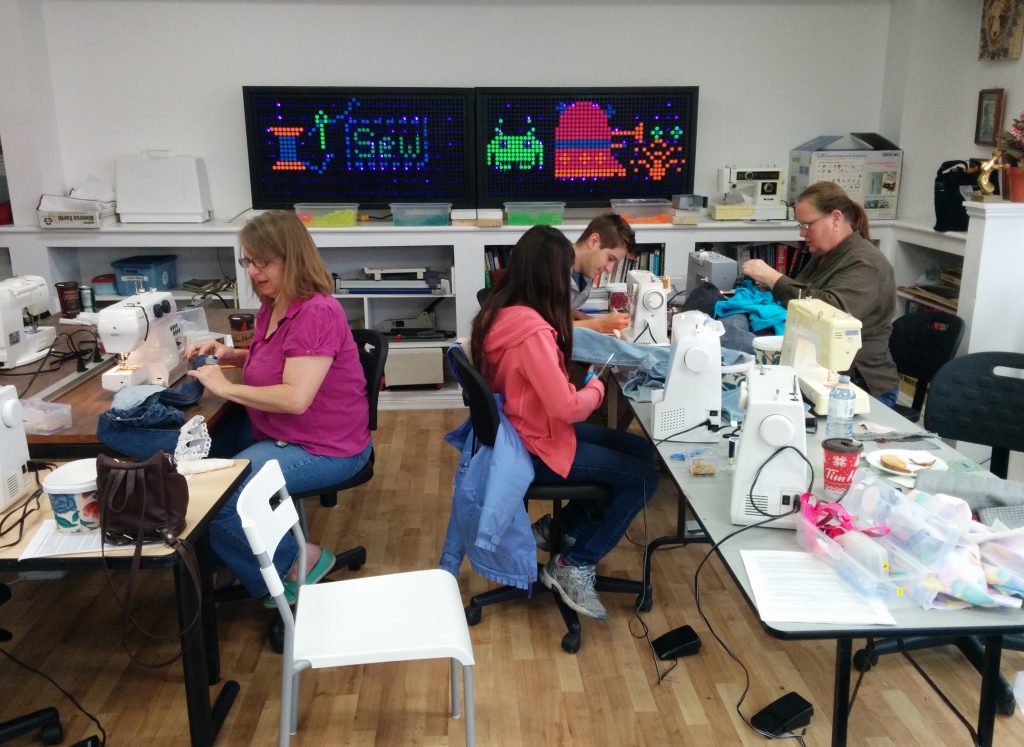 According to Niewiadomski, makers are folks that embrace a do-it-yourself work ethic. Knowledge of materials and a deep curiosity for how things work are all a part of what it takes to be a maker. While some makers might refer to themselves as artists as well, Niewiadomski pointed out that a distinction between the two might be that makers typically have a plan and vision for their end product, while artwork is usually more emergent and process oriented.

Niewiadomski is a graduate of OCAD University’s sculpture and installation program, but as she explains, “I didn’t want to be a gallery artist. My work didn’t really fit.”

Rather, Niewiadomski’s passion is site specific installation. For her thesis, she created a series of installations that responded to physical spaces in the school buildings where she spent most of her time. Her work included installing cushions and curtains in a hallway windowsill, and a faux pantry cabinet in a nook in a stairwell.

“I realized I was trying to re-create home away from home” says Niewiadomski, who grew up in Hamilton. Some of her first works were an outlet for a difficult emotional situation at home, and expressed nostalgia for a less complicated past. 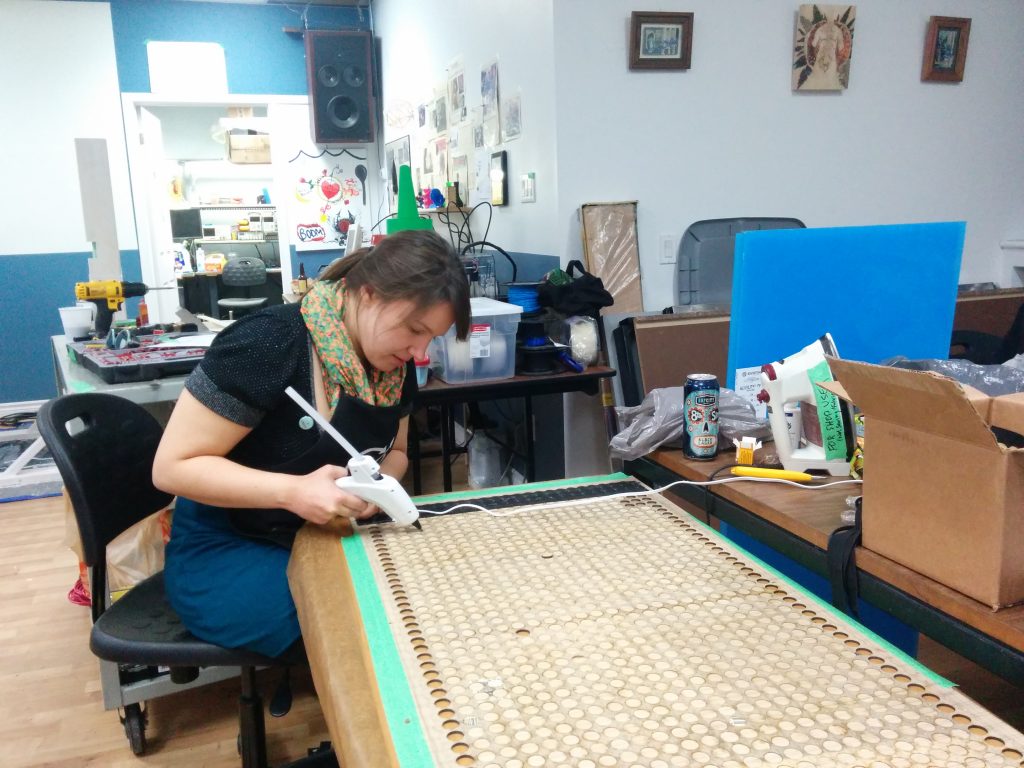 “My father was in an accident where he sustained a brain injury – he wasn’t able to talk or feed himself and needed 24 hour care.” Because of his situation, Niewiadomski’s family moved homes. “It was a paradigm shift” she says. Niewiadomski’s father passed away last October, signaling a new chapter in her life where she is able to commit herself to work in KW and start a new business.

As a freelance maker, Niewiadomski faces the struggle of many creative millennials — consistent, paid work. But for all the cautionary tales about going into art, Niewiadomski’s entrepreneurial spirit has done well for her. Her work fills the niche of animating public spaces with functional objects, an important feature in any vibrant city.

If you’ve ever checked out “Funtario Friday” – a street fest on Ontario street in Kitchener in the summer – you’ve probably glimpsed her enormous light bright. Or maybe you picked up a clear tape hand mould while gallivanting around Night/Shift last October – Niewiadomski made those too. Just recently, the City of Kitchener commissioned her to create a giant connect-four game, to be unveiled this June. 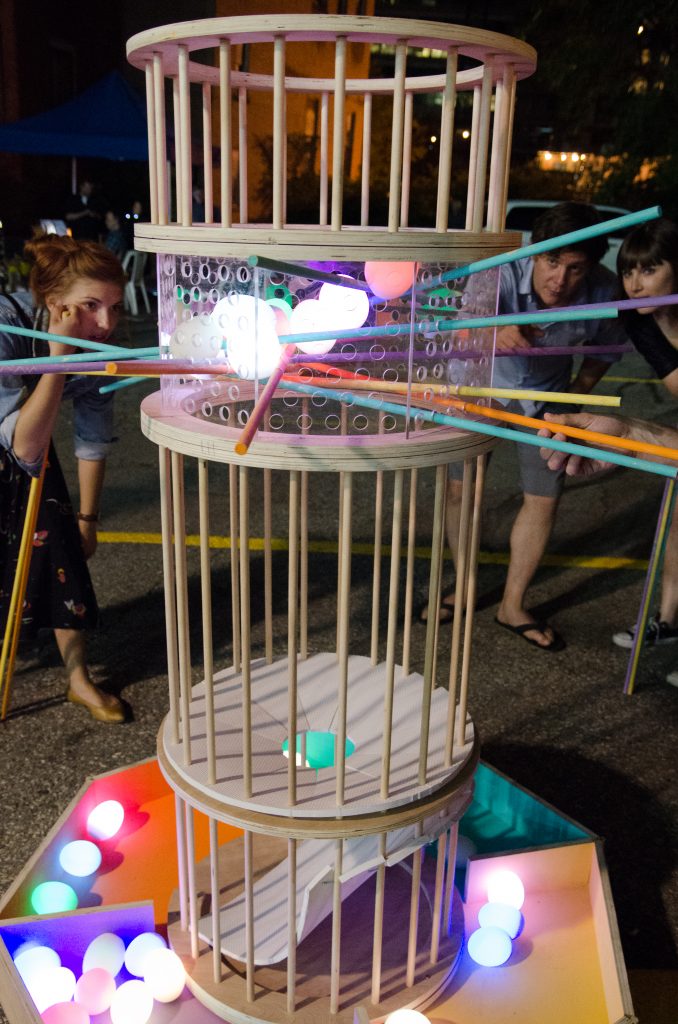 Niewiadomski’s next project is a mindful makers day-camp for kids based out of Westminster United Church in Waterloo.

“I’m basically bringing a university education to a kids level,” she says. The camp is inspired by MIT’s “How To Make (Almost) Anything” course and involves combining highly technical skills like soldering and vector design with some all but forgotten home economics classics like felting and sewing.

If this sounds as cool to you as it did to me, take note, an adult camp might be in the works in the future. For now, Niewiadomski is focusing on kids because (a) parents need childcare yo!, and (b) kids are way more capable of creating functional objects than we think. In our risk-phobic society, they are rarely given the opportunity to experiment with “big kid” tools.

Niewiadomski assured me that safety is a high priority in any of her work with the public, but that given rules, skills and tools, kids are capable of way more than stenciled hand turkeys and macaroni covered Kleenex boxes. Besides, those types of crafts are disposable. 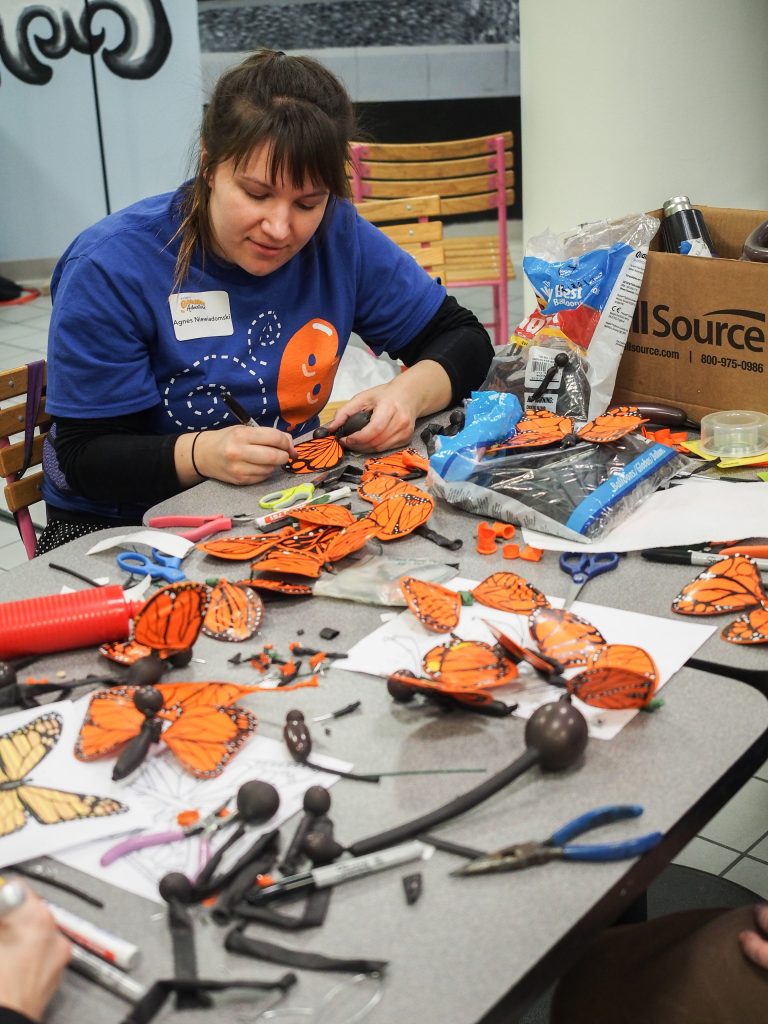 “I want to give kids the opportunity to make something mindfully that they can keep and be proud of.”

So how does Niewiadomski re-charge between projects? When I asked, she looked at me and paused – for the first time in our two hour chat. “I make other stuff” she shrugged. I guess when work is what you love, you’re re-charging your batteries every damn day.