As I sat beside Ken Wilson in the middle of his Store WOW I could see, without turning my head, one punching bag (40 pounds), a large “TAN HERE” nylon sign, a cookie jar, two coat racks with coats (one topped with a wig and Canada flag cowboy hat), a rack for wine bottles, a potted plastic flower arrangement, various canned soups and vegetables, a framed painting of the Virgin Mary, an old bicycle horn hanging from the ceiling (with “SERVICE BLOW HORN” sign attached), at least four mirrors, more than 25 lamps, one right-footed Bauer hockey skate, one right-footed roller-blade, three canes, a black feather boa, a bed frame, two aquariums (one filled with dusty vitamin bottles), three stereos connected to different speakers, six or more dolls, a soccer trophy (FINALIST), a tiny red model Ferrari, a sewing machine, a faded box of sea salt, a jar of zinc, a dumbbell, three rolled up foam mattresses, Gran Turismo 4 for PlayStation 2, a VHS cassette labelled “MAHALLA JONE,” and a sign that says “If any lack wisdom, let him ASK OF GOD…and it shall be given him. James 1:5.” All of the above sits upon a sort-of-visible architecture of shelving, much of it improvised. 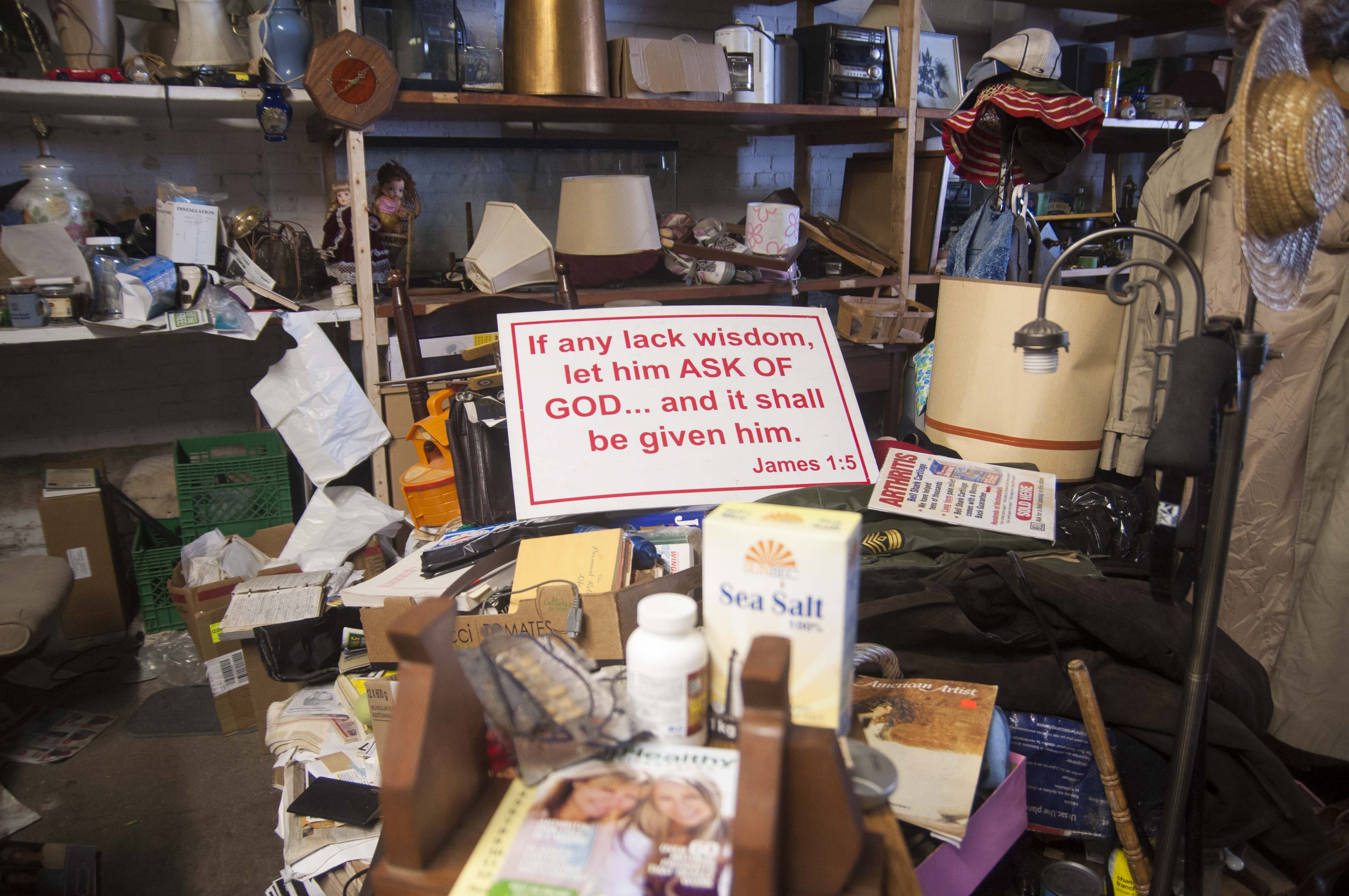 Everything is for sale inside the Store WOW.

Before I go on, and while we’re sharing a smile about an 80-year-old man and his stuff, let me state clearly: Ken Wilson knows that you think he is crazy—he told me so. But to the extent that anyone can choose how to live a life, Wilson has chosen his.

His store sits in the shadow of the new Google office in downtown Kitchener, and “it’s called Store WOW because when people come in, they always say ‘wow.’”
The store-not-store is not on Google Maps, though it is, in a way, inside Google—more on that later. A sign on the loading dock advertises a closing sale—more on that later, too. 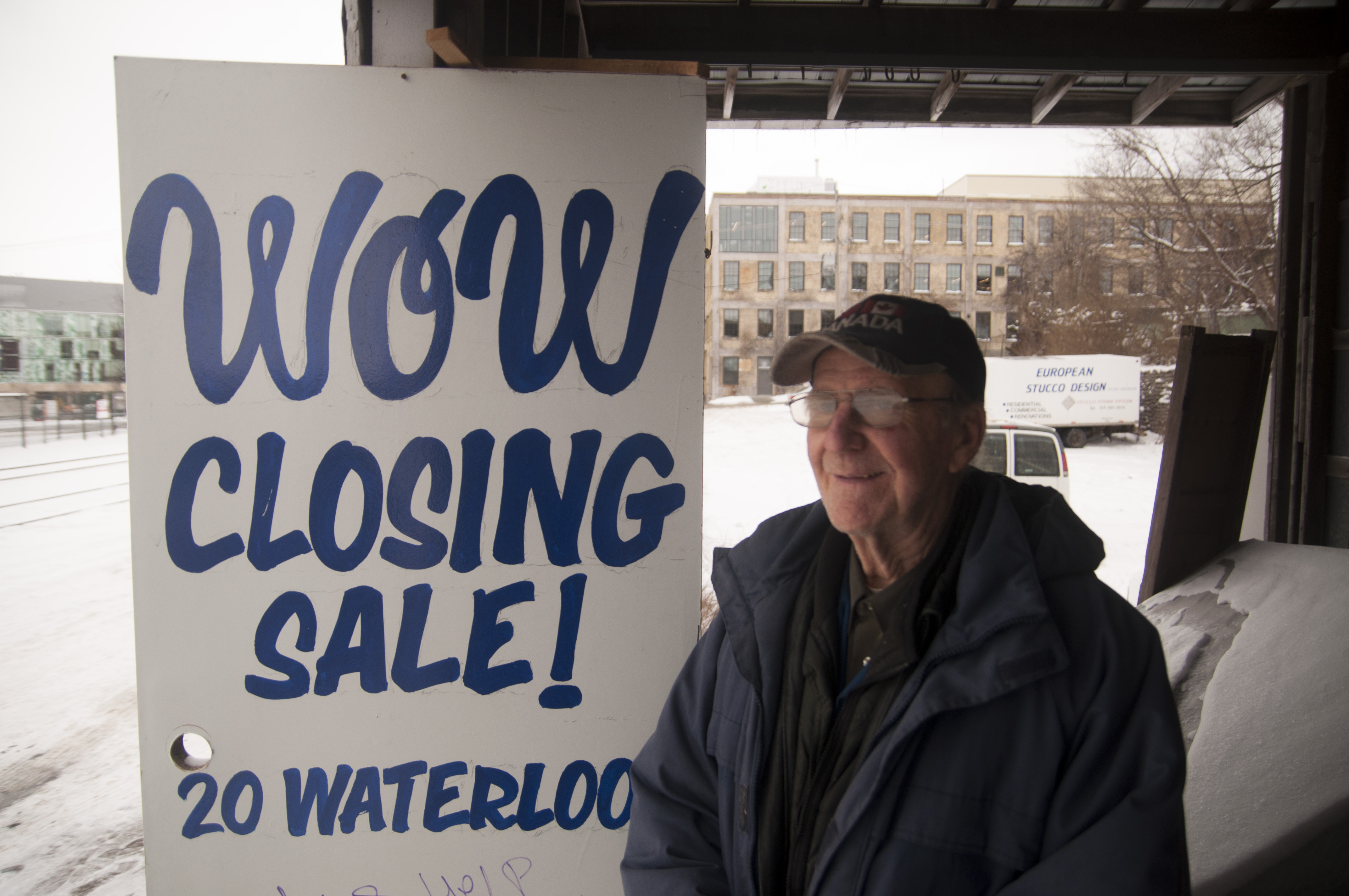 Ken Wilson on the loading dock at his store. The new Google office on Breithaupt Street can be seen in the background.

Before he opened the store about five years ago, Wilson worked as a furniture refinisher, at one time managing eight locations around Southern Ontario. He also spent much of his life buying and re-selling estates. This accumulated past is now the Store WOW.

According to Wilson, the two afternoons I spent at the store were unusually slow, owing to weather and especially the closing of Waterloo Street for LRT construction. Before LRT construction the store apparently received “between 40 and 50 customers” each day.

My first afternoon there, I counted four: a regular visitor with no intention to buy anything; Alex, from KW FreeCyclers, who per his group’s mandate to “create from recycled goods,” took a couple broken VCRs (free), but was really looking for parts to make an ozone generator; a quiet guy who mostly sat by the front window, and who was there my second visit as well, organizing nuts and bolts; and a red-faced teenager who paid $20 for a box of speakers, as-is.

That first afternoon I badgered Wilson about paying his bills, and shared with him my astute observation that there were less than 40 people in the store. He explained to me that he is happy living simply, and that he spends less than one dollar on himself, each day.

At this point he picked up a yogurt container full of fried rice, which a friend dropped off for him that morning, unsolicited. As he cares for others, he is cared for.

I can tell that he can tell that I am skeptical. And yet he seemed entirely sincere and open, including when he explained that he cuts costs by wearing the same clothes every day.

“I need to wash my clothes every month only. And I’ve asked my close friends, the ones who would tell me, and they say that they smell no bad odours on me.”

I did not smell any bad odours on Ken Wilson.

“I always make the sales I need to,” he said. “For example, I sold a whole lot of stuff to the guy decorating the Google office, a sculptor from California.” Staff at Google identified the artist as David Lovejoy, who I reached in California.

“Ken’s amazing. We picked through [Store WOW] almost daily,” Lovejoy shared with me by e-mail. “On the workbench [also at Google] is a large steel mallet, manufactured by KENTOOL. I bought it from him and put it there in his honor. He was a godsend.” 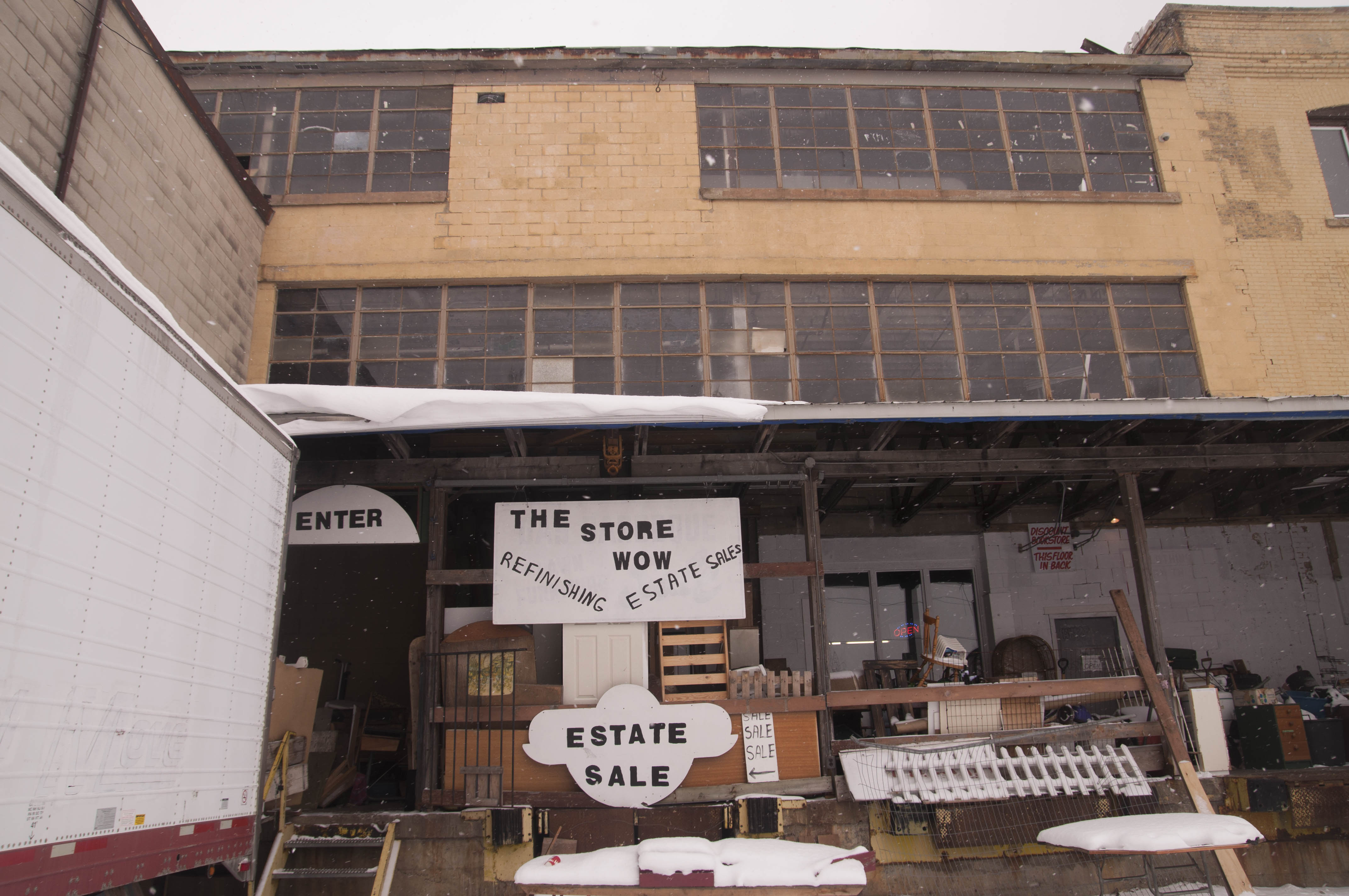 When I arrived to spend a second afternoon at the store I met Demetre, a kind-eyed man in a large furry hat, who explained that he was watching the store for Wilson, who was busy. I found him in the back of the store showing an armoire to a couple who drove from near Lindsay after seeing a Kijiji advertisement. A friend of Wilson’s sometimes posts items online, for a cut, and he called while I was there to see if it had sold.

After a few minutes Demetre wandered over and asked me to watch the store, because he needed to leave, and I did.

Wilson and the couple took half an hour to return to the front of the store, at which point he shared with them a story he shared with me the first afternoon, but this time with a prop.

Wilson recovered from polio as a 12-year-old, which until a recent bout of pneumonia was the last time he was sick. Nevertheless, he recently scheduled a medical check-up. At that point the prop emerged: a round coil of steel with two handles to be squeezed together—a simple grip-strength machine.

As Wilson explained, “the first thing the doctor did when I arrived was test my grip strength. He said squeeze, really squeeze, and I really squeezed! When he saw the result he sent me home, because nobody with that kind of strength could have anything wrong with them.” I took my turn squeezing the handles. It was harder than it looked, and Wilson nodded knowingly. 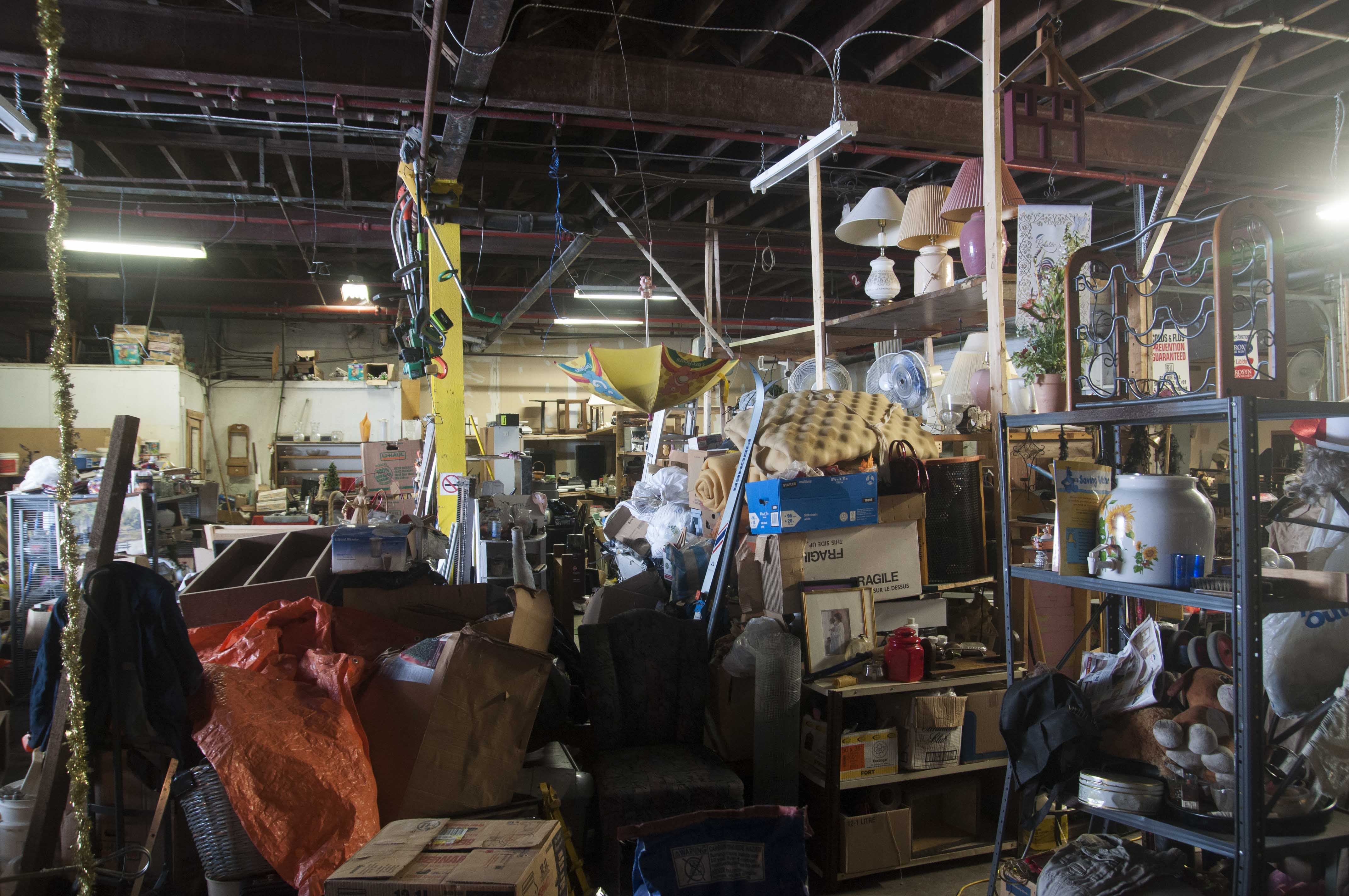 Wilson understands his polio recovery as a sign or gift from God, to whom he promised to devote his life if he survived. He regularly shares the home he rents with street-involved people just out of jail or trying to get clean. I know that he often takes his rusty cargo van to the food bank to pick up groceries for others, and that he encourages them to volunteer at his store.

“People know I want to help, so they often come to me for help. But I don’t give money because I have no money to give.” 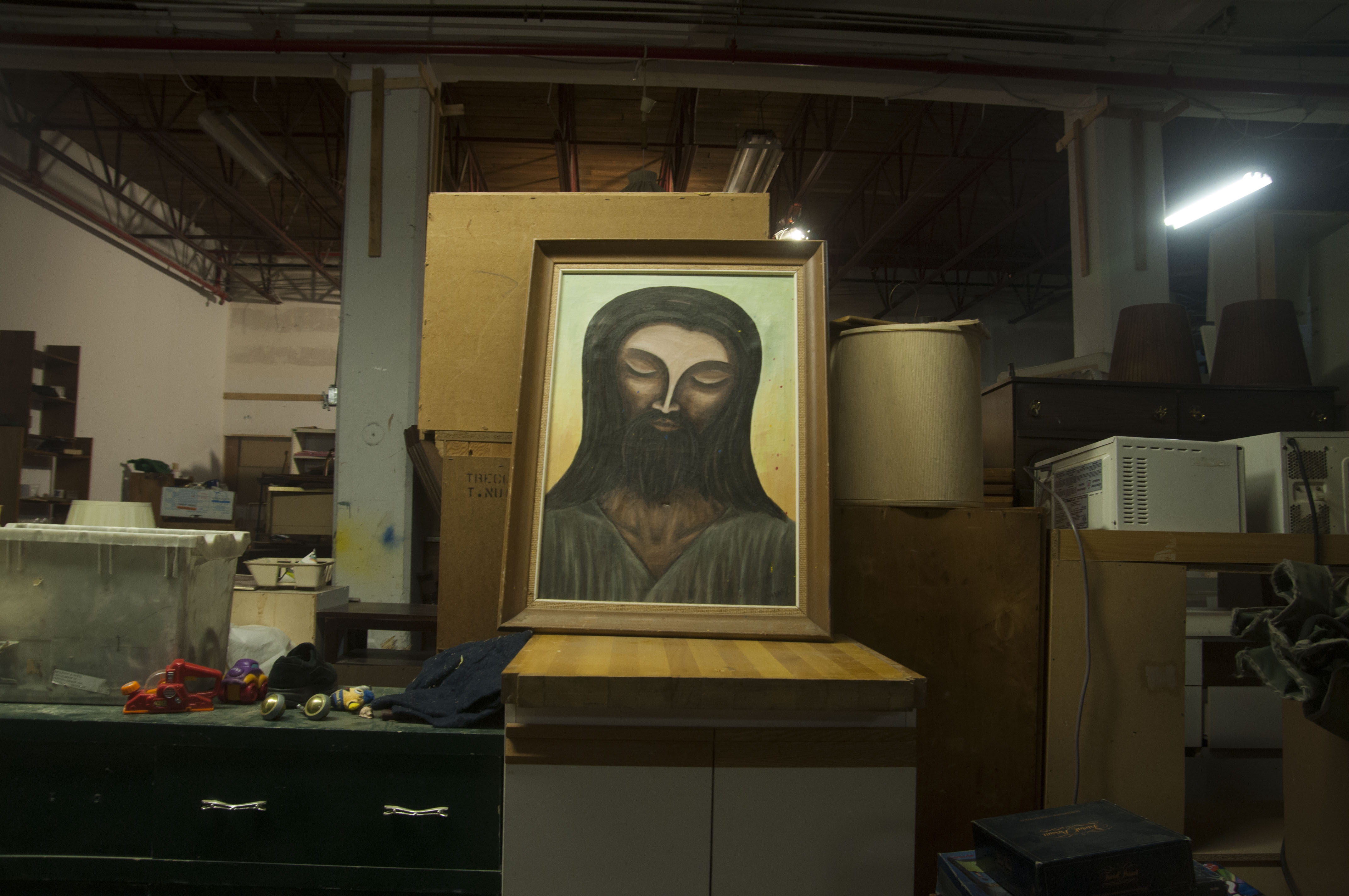 The first time I walked into Wilson’s store he was on the phone, telling a prospective customer about Jesus’ radical politics and virtues, universal love, voluntary poverty and selflessness among them. I asked Wilson if he had ever considered the similarity between his and Jesus’ life, a question he found funny but not worth discussing. When I asked a second time he changed the subject.

Wilson hopes to be moved out of by the end of the month, though he also admitted to me that he’s been saying that since September. When I asked him about the closing sign and his future and the fact that his store is still packed with stuff, Wilson explained that he wants to leave because the roof is leaking, and badly. I could not confirm this with his landlord, but he showed me water damage, and Alfred, a friend of his with strong opinions about gentrification and McDonald’s, described the leak as being like “rain, but inside.”

But the rain is not Wilson’s only or biggest problem. The Store WOW is huge, and though it’s literally three degrees inside I’m not surprised that rent is $4,000 per month.

This is a problem because Wilson’s stuff is not, for the most part, immediately saleable. It takes a lot of work to turn what’s in his warehouse into stuff that people will buy—more work, he admitted, than he cares to do at this stage in his life, and more work than most shoppers are willing to invest.

But he will not take Store WOW to the landfill. He hopes to find a place for all his stuff, and to find people currently without a livelihood who are interested in learning skills like furniture refinishing, or upholstery, or electronics repair, and who could take over his work.

Worse-case scenario, I ask, could you junk your stuff?

“Well, what in here would I junk?” Wilson pointed to a large piece of wood with two small thin pieces of wood attached, which he explained is a sauerkraut masher, and which I took to be evidence that everything under his roof has a purpose, and value. A professional mover recently quoted Wilson that it would cost him about $20,000 to empty the Store WOW.

“And I told him, you’ll be the first and only thing in the dumpster.” 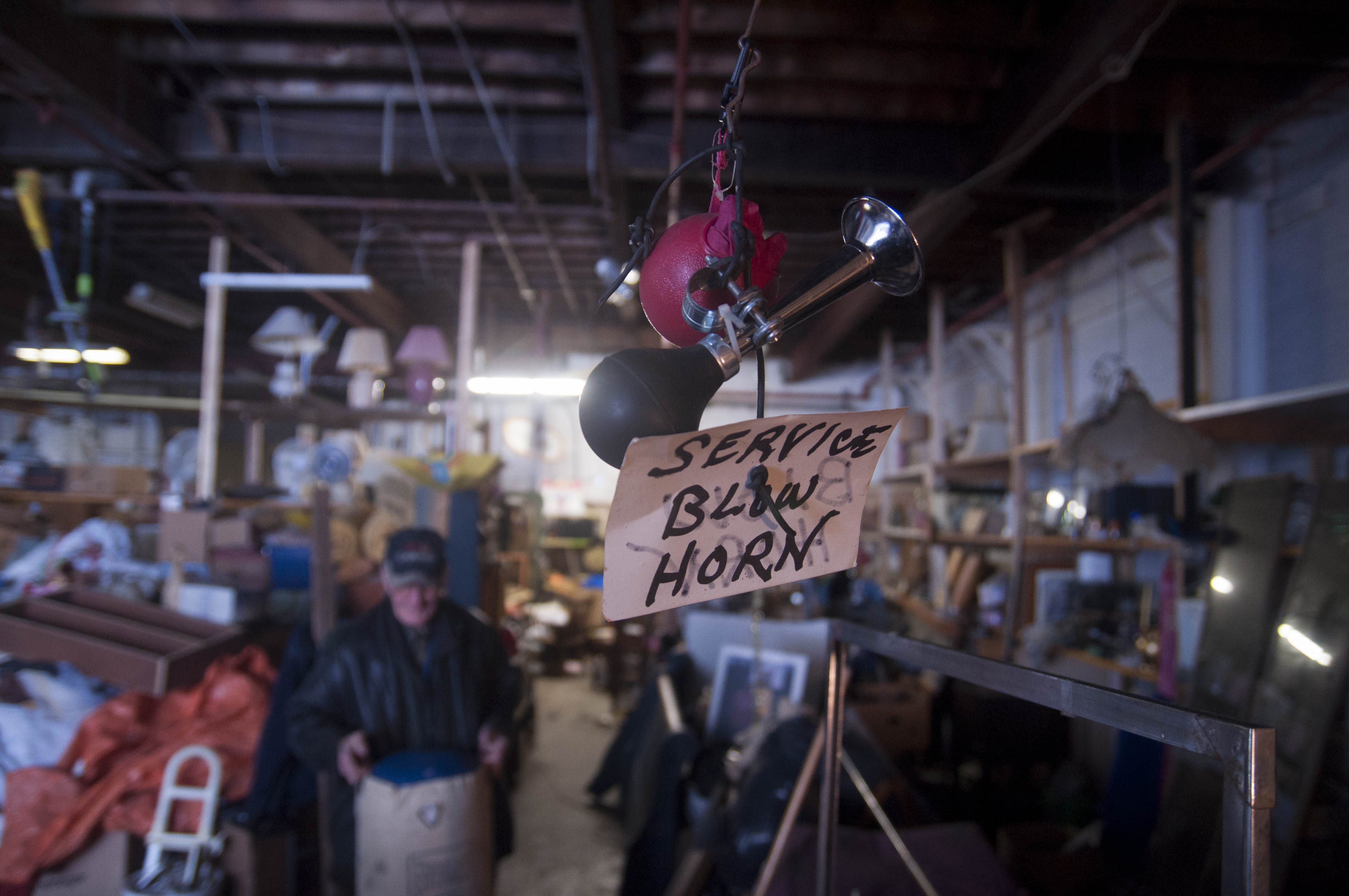