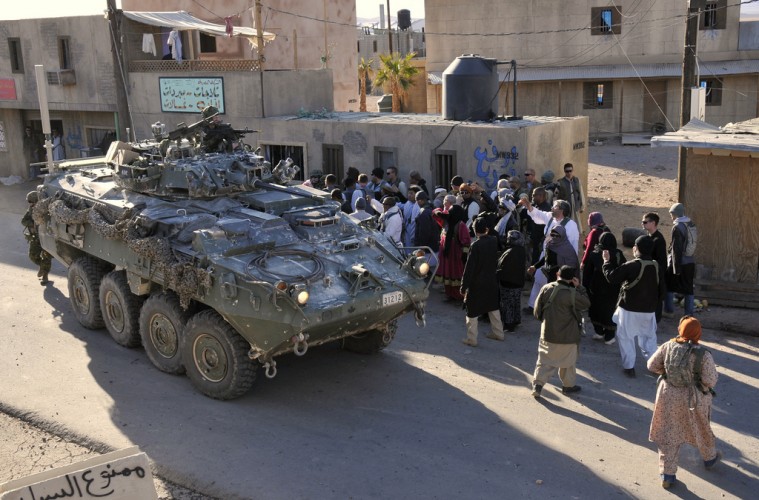 On March 7, Waterloo’s city council approved the funding for a light armoured vehicle III (LAV) memorial in recognition of the service and sacrifices of Canadian military personnel in Afghanistan. The LAV will be installed uptown, near the Waterloo cenotaph. If funding from local donors and service groups cannot be found, the council unanimously decided to contribute a maximum of $28,000 from a contingency fund. The monument is offered by Canada Company, a charitable veteran’s advocacy organization that hopes to place 250 decommissioned LAVs across the country.

Proponents of these memorials see them as a “modern way to remember a modern war,” a reminder of Canada’s Afghanistan mission, in which 40,000 troops served, 2,000 were injured and 158 were killed between 2001 and 2014.

I am not against the idea of a publicly funded permanent homage to important people and events, values and ideas — symbols of who we are, where we’ve been, and where we dream to go. The LAV monument project concerns me because the question to council was not: “What type of monument do we want?” but rather “Where will we put a LAV monument?”  I am deeply concerned that militarism and the business of war will be put on a pedestal in our civic space.

And the LAV monument is directly linked to the business of war. Heated debate surrounds Canada’s $15 billion contract for the sale of upgraded LAVs to Saudi Arabia, a country infamous for its human rights violations. Morality aside, the LAV deal may also be illegal. Daniel Turp, a professor of international and constitutional law at the University of Montreal, argues that the government is failing in its legal obligations to implement arms export restrictions.

It’s a shame that the LAV will simultaneously become a symbol of honour and appreciation for Canadian veterans and a tool in the arsenal of a repressive regime.

At $28,000, the LAV monuments are both expedient and cost effective for city councils wanting to honour veterans of the Afghanistan mission. But is expediency and cost effectiveness a legacy we want? Canada has recently welcomed thousands of refugees from war torn countries. Many have recently arrived to Kitchener-Waterloo. They should not be greeted at City Hall by a war machine, complete with turret and gun.

Revisiting the monument design process may be costly and time consuming. There would certainly be conflicting ideas on what would be the most appropriate form of memorial to be constructed. But I would rather see greater effort put into designing a modern, symbolic, poignant and thought-provoking monument acknowledging the tragedies of war and expressing hope for a peaceful future. Decommissioned LAVs belong in the National War Museum and not in front of City Hall.