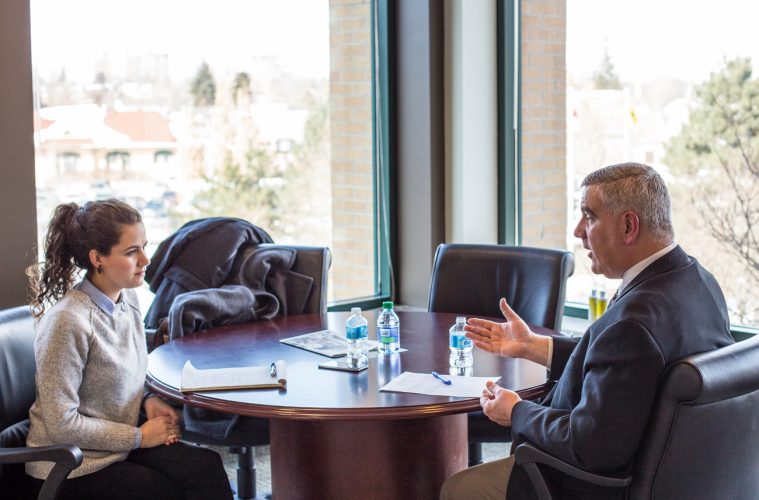 As the city’s calendar dictates, initial responsibilities for Waterloo Mayor Dave Jaworsky include everything from engaging the public to passing a budget. TCE sat down with Jaworsky to get some reflections on his mayoral experience.

TCE: Tell me about a regular day in office? What fits into your job description?

DJ: Well, when I was canvasing people said what does a mayor do? So I looked for the job description […] the best way I could describe it is that everything you see out your window or everything you see out you windshield that’s what your mayor cares about and that’s how the citizens do view
it. When they think about ‘who do I contact for this to cover this issue,’ they’ll think the mayor or sometimes a ward councillor and they’ll think of us first regardless of whether it’s a city issue or regional issue, even provincial issues.

TCE: Since settling into the role and getting a real sense of the position, are there any big challenges? Anything unexpected?

existed. Learning curve, too; what’s the biggest thing the city has to deal with? The budget. The budget, and so that was tough but we’ll probably have the lowest tax increase in the area, in the municipality, so 1.5 percent. Finally number three, just knowing the breadth and depth of what a city does.

TCE: You’ve recently opened doors for budget meetings; can you speak to your plans for transparency and citizen input?

DJ: There are some things that citizens really care a lot about, a good example is the budget is something they really care, they want to know exactly what’s going on with their money and they want that to be fully transparent and open they can come in and ask any questions any time. That’s what we said we were going to do and we’re going to do that forever more; just come in and ask any questions, you’ll get answers.

TCE: On the note of transparency, 99 freedom of information requests were filed last year, that’s more then any previous year. Why? And how can you, as Mayor, respond to this?

DJ: I can’t actually see the requests, but I asked the staff that were processing them, “what sort of categories do they fit in” and they were almost exclusively property ones […] Let’s be clear FOI, freedom of information, gives you information, it doesn’t give you answers, so if you ask you know, how many have you got, we’ll tell you 99, we don’t do efforts in categorizing, we can only tell you raw data.

TCE: Would you say there isn’t a difficulty for council members to gain the information that’s important to

I think one of the things that is good governance practice is – I’ll have to make sure I answer this one carefully, not carefully, but fully – good governance practice at a board or anywhere is that you can’t have a board member running around instructing staff what to do. You may have read in the paper about the fact that we have this thing in the code of conduct and how it prevents people from asking questions. The journalists never asked me, “So did you actually use that section of the code of conduct to prevent somebody from asking questions?” The answer is no, we did not.

TCE: During your campaign, you were asked a number of questions about your plans for open data, can you expand?

DJ: We need to liberate the information, the data that’s in city hall and at the Region, one of the best case uses for it is obviously the Grand River Transit schedule, which then can increase ridership and that’s a great thing.

TCE: What are some other areas where you would like to see data liberated?

DJ: One of the things I want to do
for more transparency is trip reports, so that if any councillor goes on an overnight trip spending citizen money there’s trip reports created. That information is shared some way.

TCE: Can you comment on, tech sector and entrepreneurship?

DJ: We’re competing against the world. So what we want to do is make sure that number one, through

entrepreneurship that we’re creating those businesses and that somewhere in this community we’re able to host them. Number two, we need to be able to make sure that we’re attractive to other places to bring their businesses and to operate here, we have a lot to offer, whether it be land in Cambridge, the urban lifestyle of Kitchener, or the higher education of Waterloo and I think all those three are viable offerings to companies at different stages in their growth. Entrepreneurs don’t need 40,000 square feet, they need their first 1,000 square feet.

TCE: A lack of affordable housing has been a popular topic in media and in council meetings, what are some plans at both the city and regional level to mitigate this?

DJ: You mentioned gentrification, you know we can’t control what individual land owners decide to do with their homes, it’s their own home, they can choose to rent it, renovate

it or whatever, but we need to make sure that we are also giving proper incentives for people to build housing that is more affordable or supportive housing. Just recently the Region supported an affordable housing project proposal going forward through that Working Centre, but if you take a look at it, that’s like 20, 30, 40 units and there’s 3000 on the waiting list, that’s a long way to go.