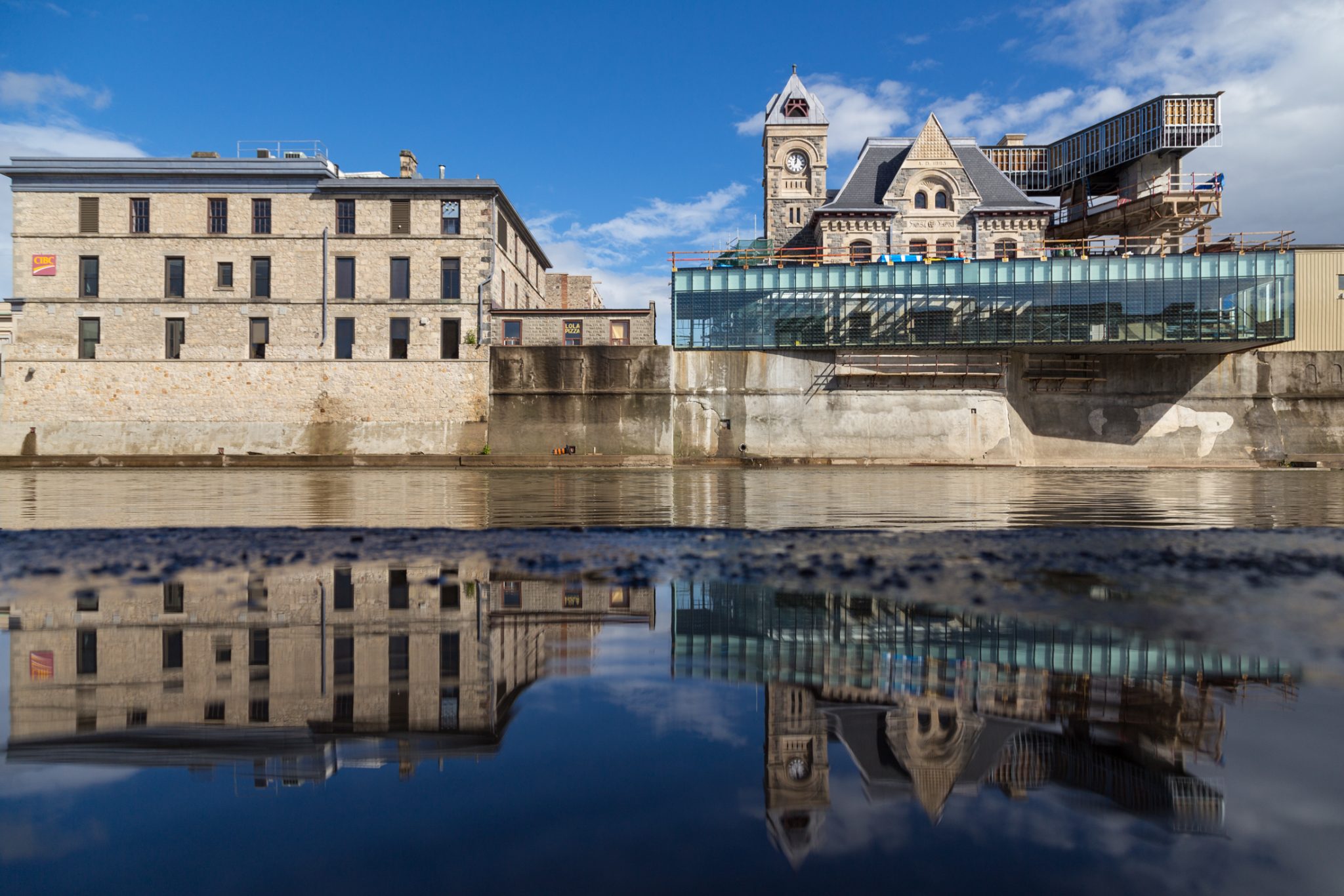 If Streets Could Talk: Galt

When I was 12, I had about two hours of freedom between the time school was out and the time my mother arrived home from work. From 3pm to 5pm, my childhood friends and I would usually wander around downtown Galt. We’d get ice cream at L.A Franks, we’d throw rocks in the Grand River and we’d walk around the perimeter of the abandoned factories at Southworks Outlet Mall.

I remember one specific afternoon, my friends found a window in one of the old factories that was slightly ajar. One by one, we threw our backpacks in and climbed through the window, ignoring the NO TRESPASSING sign that all kids ignore when they’re up to no good. The whole time my heart was racing; I knew how disappointed my mother would be if she found out, but this was a building I had passed so many times as a child. I needed to know what was inside.

No, we didn’t find a dead body or have a run in with a three-headed dog, but we did spend about an hour exploring every corner of this factory that everyone had forgotten about. My 12-year-old brain tried to picture when employees were walking about, when there wasn’t smashed glass all over the floor and holes in the ceiling. This amazing building was left there to rot, to only ever be explored by trespassing kids or the occasional squatter.

And it wasn’t like it was tucked away on the outskirts of town. Southworks is literally in the heart of Galt, but these old historical buildings had become so forgotten about, that most people drove past without a second glance. 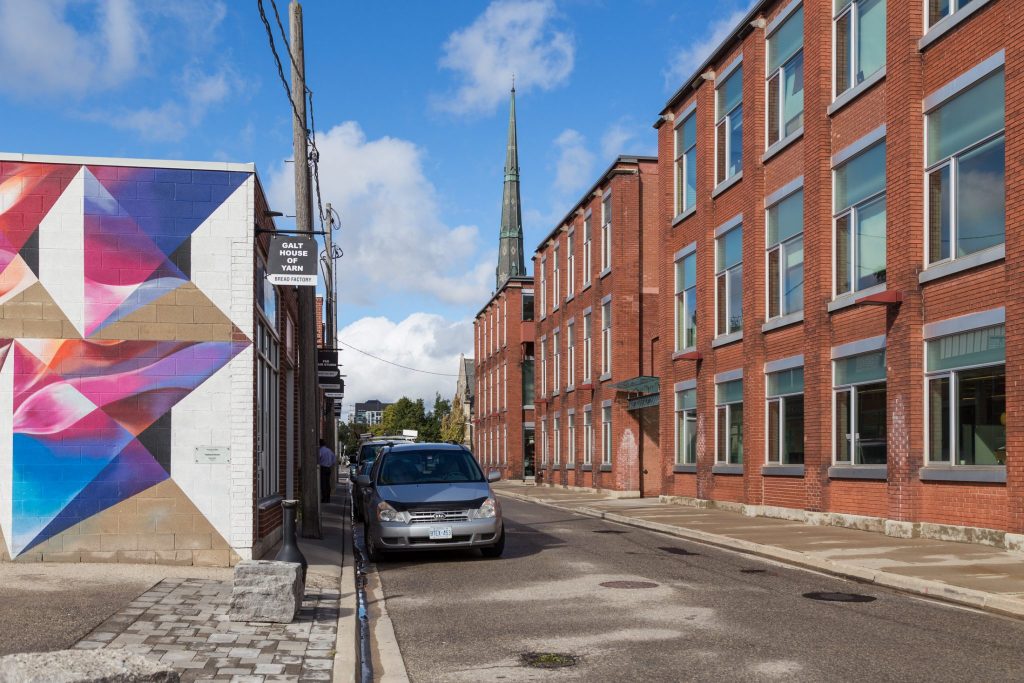 I was born and raised in Cambridge, specifically Galt. My whole life I lived in Old West Galt, near Highland Public School, which is beside Victoria Park on Salisbury Avenue. My parents still live in my childhood home, a house I never really loved until now, five years after leaving. To anyone familiar with Cambridge’s neighbourhoods, Old West Galt is the stereotypical bougie area with the globe streetlights that remind everyone of Sesame Street.

The homes in the centre of Old West Galt, on Landsdowne, Brant and Aberdeen, are mostly million dollar century homes, owned by the bankers, doctors, teachers, and lawyers of Cambridge. As you start to travel further up Cedar Street or Churchill Drive, where I grew up, the houses become more modest, yet are still old and full of character.

This neighbourhood is beautiful. It’s a suburb without cookie cutter modern developments. The backyards are more spacious with mature trees and the neighbours all know each other. The kids all have paper routes and everyone hands out good candy on Halloween.

The bizarre juxtaposition, however, was that just outside of our safe, wealthy and privileged neighbourhood, when Salisbury Avenue collided with George Street, you were no longer in West Galt’s safe tight hug; you were downtown. 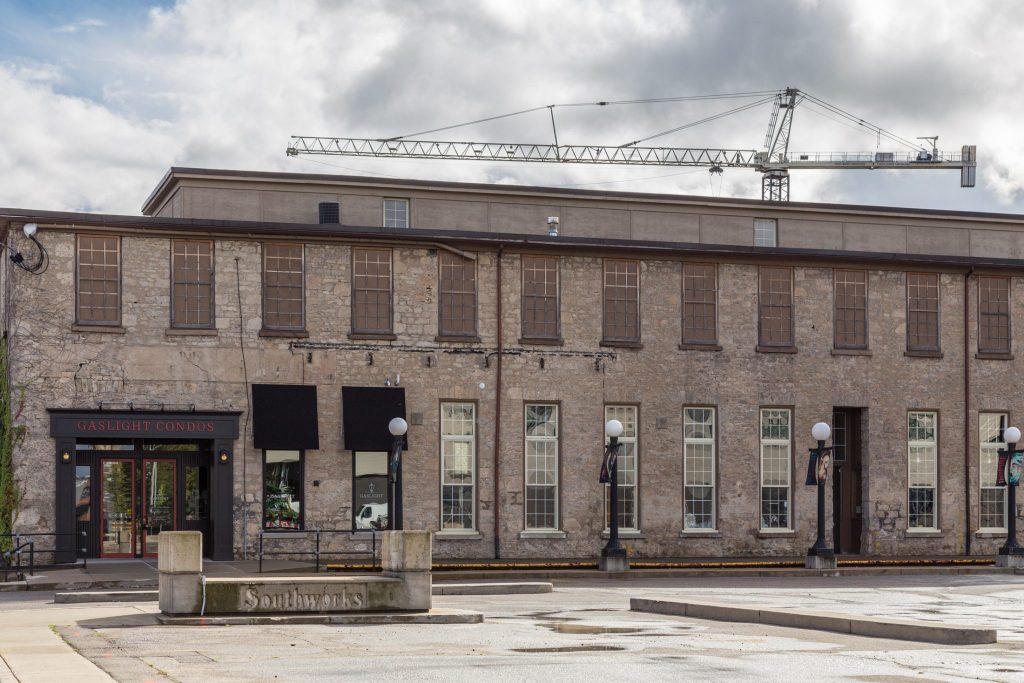 I remember being 15 and hanging out with my friend one night. We were bored and our parents wouldn’t drive us anywhere, so we decided to go for a walk. “Be careful,” my mom said, as we left. “Are you going downtown?”

“Obviously not,” I responded.

But we did anyway. Going downtown Galt at night when you were young was sort of like drinking underage. We knew it was wrong. We knew there was a risk. We knew our parents would be mad if they knew. But we did it anyway.

Nothing bad happened to us. We were perfectly safe. We were just stupid teenagers who wanted to throw rocks in the river after dark and gossip about boys.

The fear didn’t come from excessive news reports, either. I don’t remember ever hearing about crimes happening downtown. I do remember the Royal Hotel before it closed. In an article in the Cambridge Times, the Royal Hotel, which used to be on the corner of Main and Wellington, was described as “such an eyesore, [a] haven for drugs and other illegal activities, that the city, police, fire, social services and other agencies raided the place and shut it down.” I don’t remember when the hotel closed, but I do remember always walking on the other side of the street if we ever passed it. That building is now a Coffee Culture. It’s nice — I had a sandwich there just the other day. 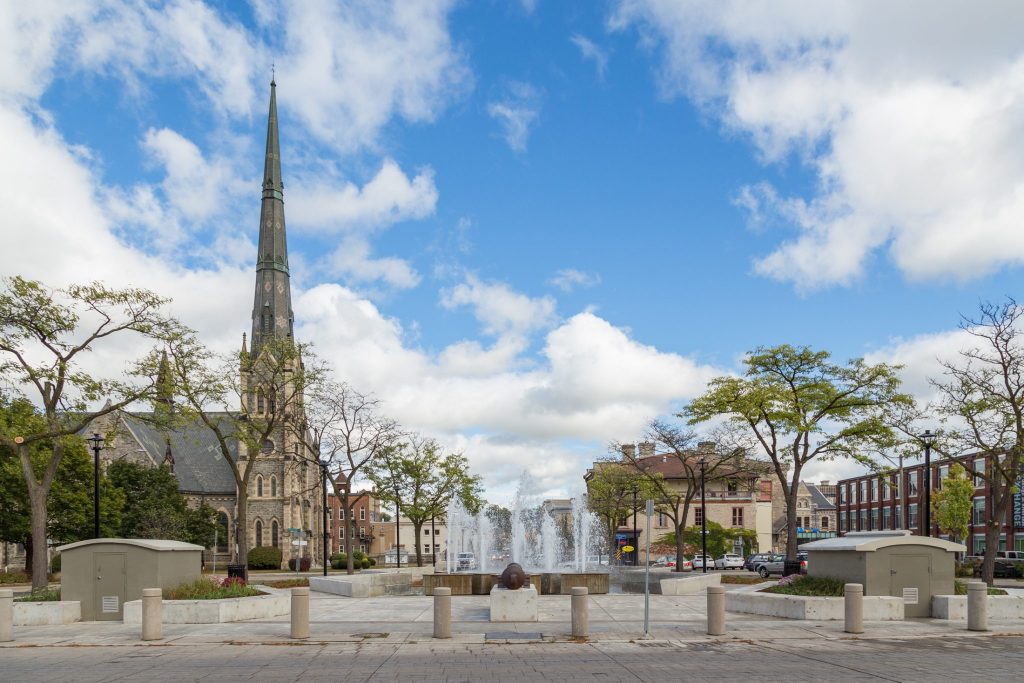 The fear of being downtown was solely because of the amount of drugs that were being abused by the people who either lived downtown, or who were frequently there. Drugs were, and still are, associated with criminal activity, which ultimately makes society think everyone who does drugs will probably try to murder or rob you. While now I could look at this assumption and detect the problems, I also understand why parents didn’t want their kids down there alone at night. Was it the fear of them being hurt, or was it the fear that they would start hanging around the “wrong” kind of people?

“We’re aware of issues in the downtown. It’s no different than any other downtown in Ontario with a mid-size city,” said Cambridge Mayor Doug Craig. “We are in constant contact with Chief Larkin of the police and the district superintendent of particular problems. I don’t think there’s anything to be concerned about. You’re always on guard no matter where you go, but I don’t see that as an issue.”

Nonetheless, throughout my childhood years, up until the point where I left Galt at age 19, I always thought downtown was suffering. Businesses struggled to stay open, community events were never as packed as they are in Kitchener and Waterloo, and young people didn’t have fun spaces to hang out. After the Nutty Parrot and Fiddler’s Green closed, the only bars that are worth wasting your time in are the Kiwi or the Black Badger, and quite frankly, two bars just isn’t enough to keep me entertained. 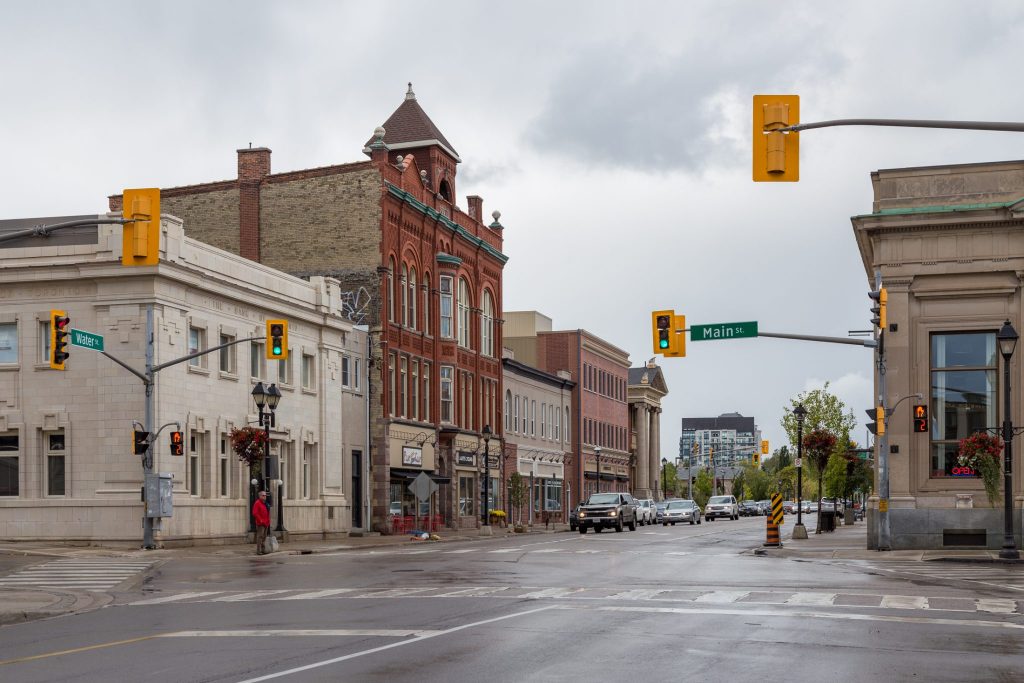 But now downtown Galt is facing some major changes. The old post office, which was then transformed into Fiddler’s Green only to close in 2007, is currently being renovated to become a new digital library, set to open in June. This 130-year-old building has been sitting vacant for 10 years. A pedestrian bridge is being built over the river, which hopefully will increase downtown’s walkability. The Cambridge Mill, a wedding hotspot, will soon be unveiling its condo-hotel project. Projectors have also been purchased to display messages downtown, mimicking Montreal’s use of projectors. But the part that everyone’s talking about is Galt’s new Gaslight District — a collection of condos, office spaces, artistic spaces and restaurants that will be replacing Southworks Outlet Mall, and the abandoned factories I broke into as a kid.

All of the shops in Southworks have either closed or relocated to other parts of the city, and a Gaslight District launch party took place on Sept. 16. Serena Ryder and Steven Page performed, which drew in a crowd that was almost too big for the space set aside. The 192 condos that were up for sale completely sold out in 24 hours, Craig said. 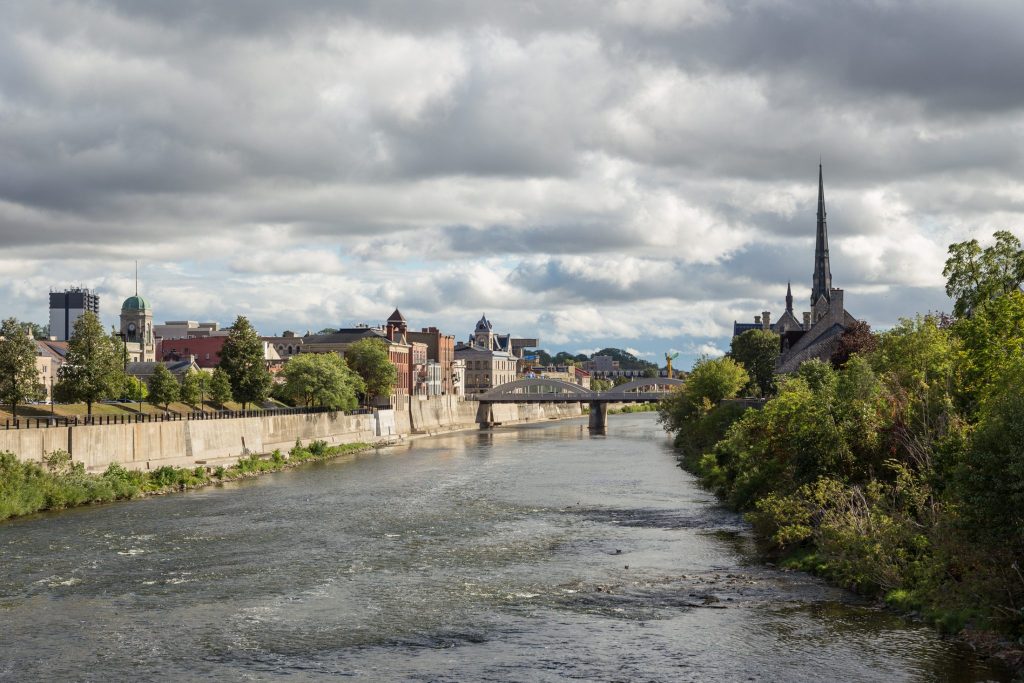 When I asked Craig about downtown Galt’s shoddy reputation, he said that the new Gaslight District would help do away with it.

“The more people you have in the downtown, the less problems you’re going to feel in terms of walking around because there will be a lot more people in the street. So that’s part of solving the problem. I’m sure numbers will help solve that problem,” he said.

“In the last couple of years, I think we’ve really turned a corner in making it self-sufficient and it’s really starting to blossom once again…I think these developments help considerably.”

I look at these amazing independently owned businesses in downtown Galt, like Forch’s Record Store or Elixir Bistro (yes, those two are my favourite) and I hope that the people of Cambridge give them their business. I worry about them. But maybe if more people are excited to actually live downtown, the local economy will thrive. 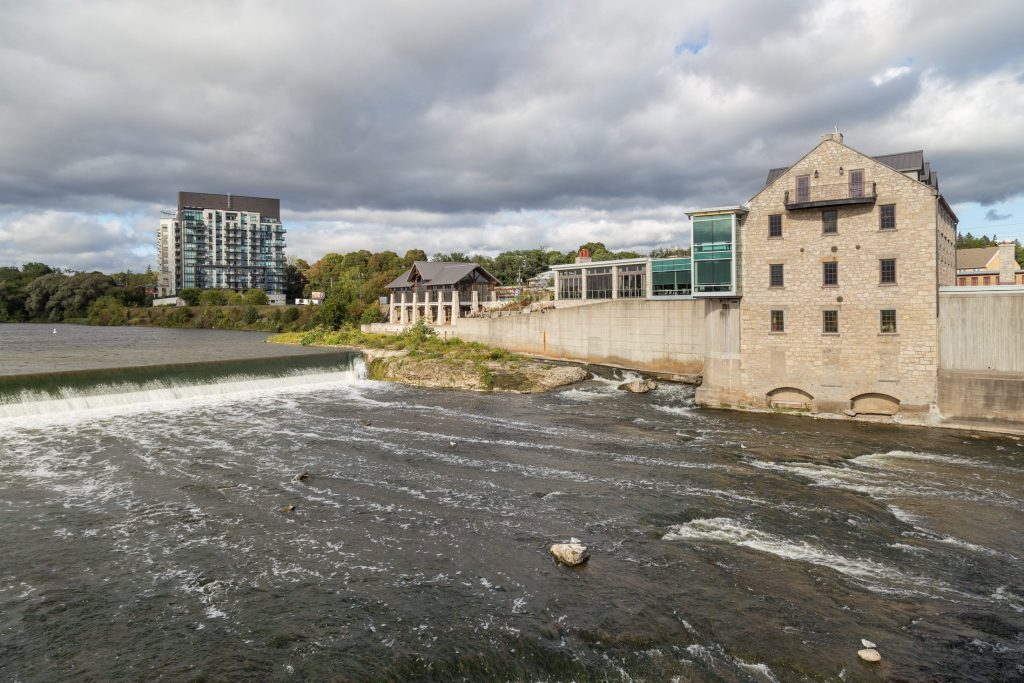 “The best possible outcome, I think is to have a vibrancy in the downtown that makes it attractive and safe and economically very positive for all the shop owners,” Craig said.

So while some Cambridge residents have expressed some concern about how the Gaslight District may tarnish the history and heritage of downtown Galt, and while I still think using the word “gaslight” to describe a neighborhood is weird, I really hope that the new projects do help to clean up downtown Galt’s reputation. It’s hard for me to picture young people actually wanting to hang out down there, but I hope they do. The second I was old enough, I couldn’t wait to get out and move somewhere a little livelier, but maybe when the Gaslight District is completed in 2020, I’ll go back to my hometown and check it out.