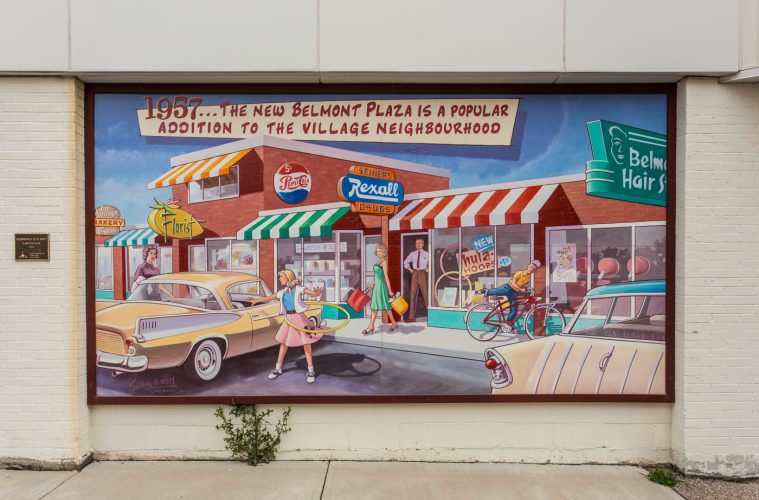 If streets could talk: Belmont Village

In the pink-skied summer mornings, as prep cooks slip in back doors to trendy restaurants, industrial workers carry coolers with packed lunches toward the looming AirBoss Rubber Compounding plant, the largest building for miles, and a reminder of bygone times when Kitchener was referred to as “the rubber capital of Canada.”

Nearby on the Iron Horse trail, commuter cyclists and young parents with knobby-tired jogging strollers whip by the clanging construction equipment where new luxury condominiums spring up from the dust of the razed Boehmer Box factory.

Belmont Village is literally and figuratively at a crossroads. And that’s what residents love about it.

By bicycle, the ride to uptown is a brief seven minutes for swift riders. Eight minutes of pedalling toward Kitchener brings you to the warehouse district, known for Communitech, Google’s growing offices, and – soon – the downtown transit hub.

“Before moving to KW in 2010, I had lived in the small town with a population of only 14,000 for most of my life,” says Charlotte Armstrong, one of the founders of Nerd Nite KW. “When I went to visit a friend of mine that lived in Belmont Village a few years ago, as soon as I saw Belmont Village, I suddenly felt like I was back home. The side streets were so scenic and filled with giant trees and old houses and Belmont Village itself with its wide streets and small stores.” 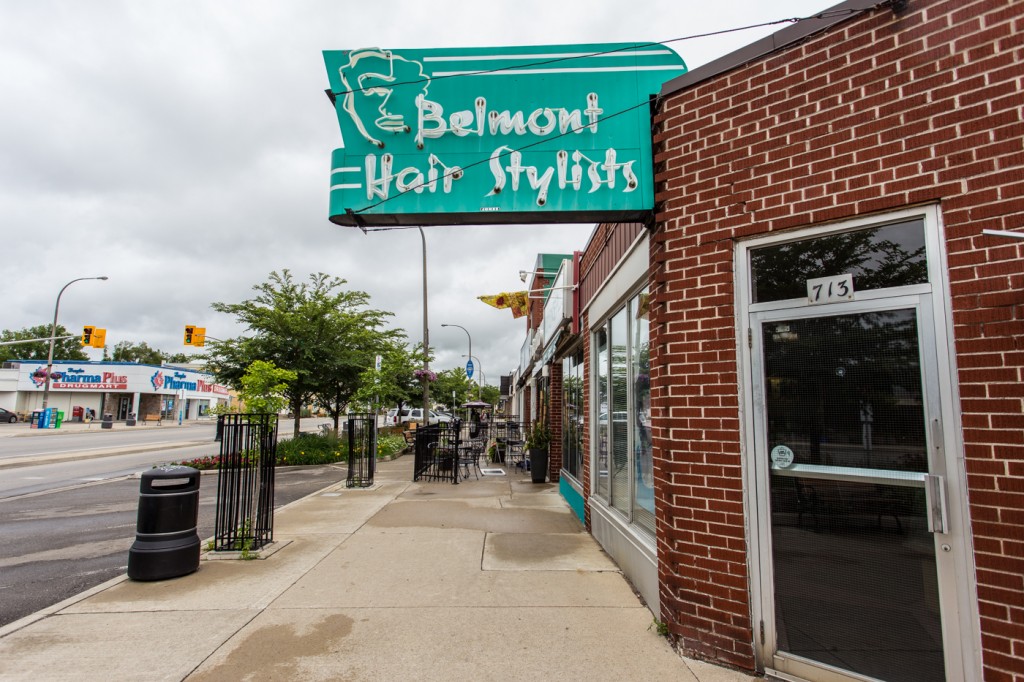 “I instantly wanted to live there,” says Armstrong.

“Luckily a rental opportunity came up a year ago and myself and both of my Nerd Nite KW team of Eric Moon and Ryan Consell settled into a 50 year old house that we happily call home. Our space is close enough to all that we need…We bike, walk, and use public transportation and the location is completely accessible.”
Wendy Philpott echoes that sentiment. “It’s good for your health – mental health and physical health, to see people face to face. It definitely builds community. Being close to Blemont, doing this,” she says, ducking between hostas in her front garden. “I always see neighbours.”

If you have a dog, the warm welcome for chit-chat is obvious: silver water bowls occupy front stoops. 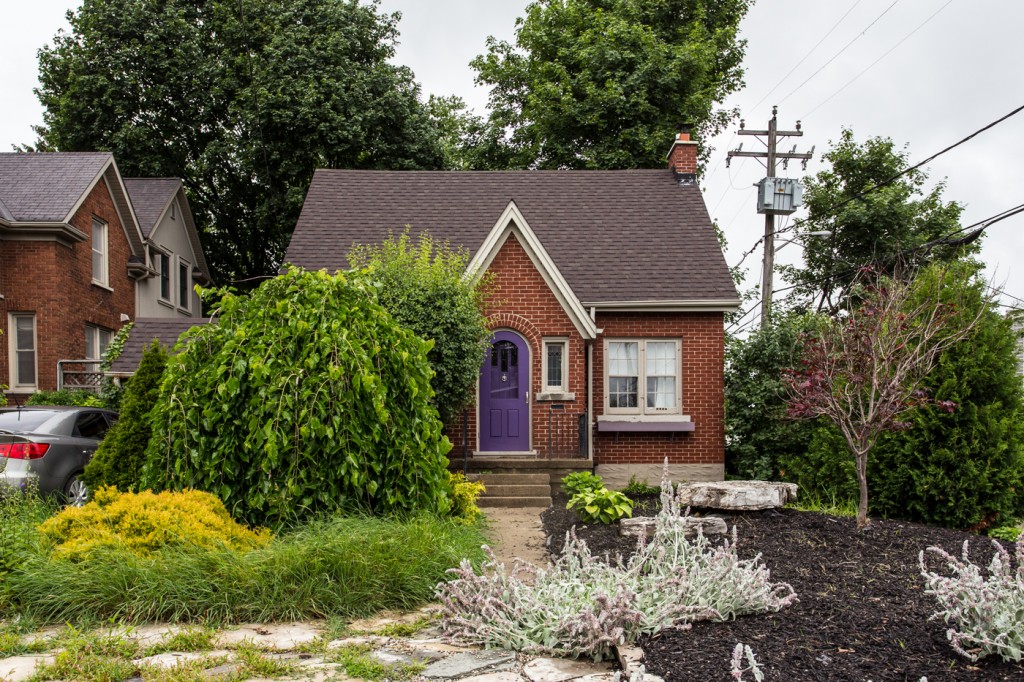 With no knowledge of Kitchener-Waterloo geography and only two days to pick a new home after relocating from Regina, Philpott and her husband picked their 80+ year-old home on Claremont because they wanted a mature neighbourhood where they could bike to work, and their two children could play in the streets.

“We soon realized how lucky we were. I love this neighbourhood,” says Wendy Philpott, of 48 Claremont, still rummaging through hostas and other flourishing greens in her front yard garden. The Philpotts are now regulars in The Old Kitchen Cupboard and the Thai Bistro. Argyle Park is always busy, she says, and she loves the Little Libraries scattered through the area. 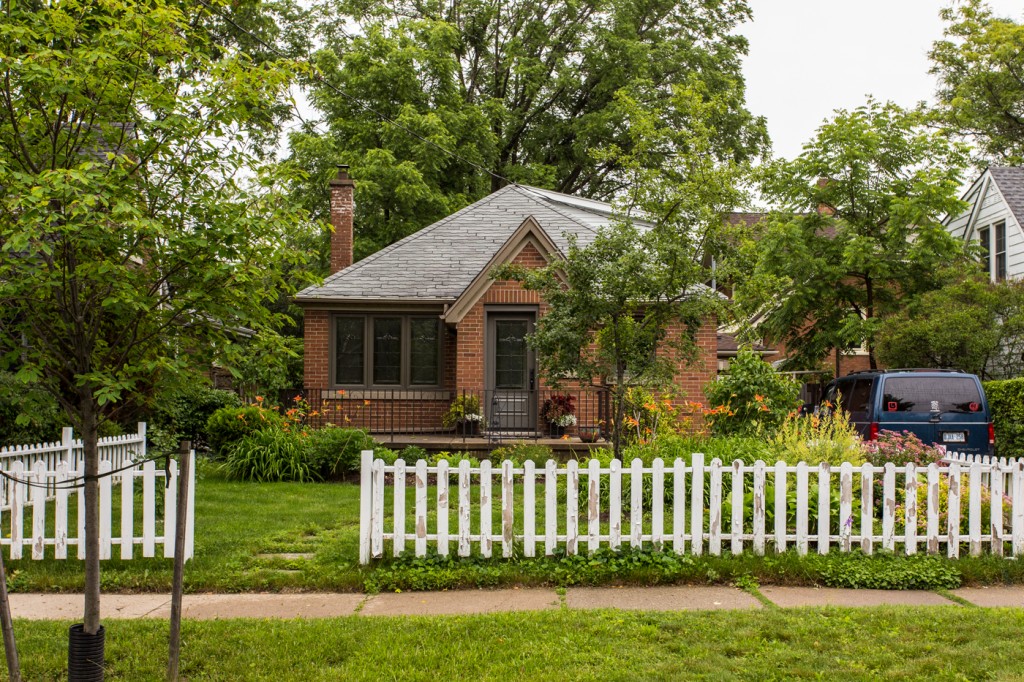 Depending where you draw the imaginary lines around the village, the core of Belmont could be said to be dead centre among two, three, or even four neighbourhood associations – Westmount, Cherry Park, Victoria Hills, and Uptown West – all of whom host a plethora of events and activities.

What’s interesting about the proliferation of events here is the collision between communities. To the south, wide, gaping, lawns and hot, empty paved lots remind us of Kitchener’s industrial past. Those in Westmount take pride in their Montreal-inspired streetscapes and adorable “twin” houses (designs replicated in more than one street, visible if you look closely through the shade trees and well-established vines covering the many cross-gabled, Tudor or Georgian, single, detached homes that make the west side enviable and pricey. 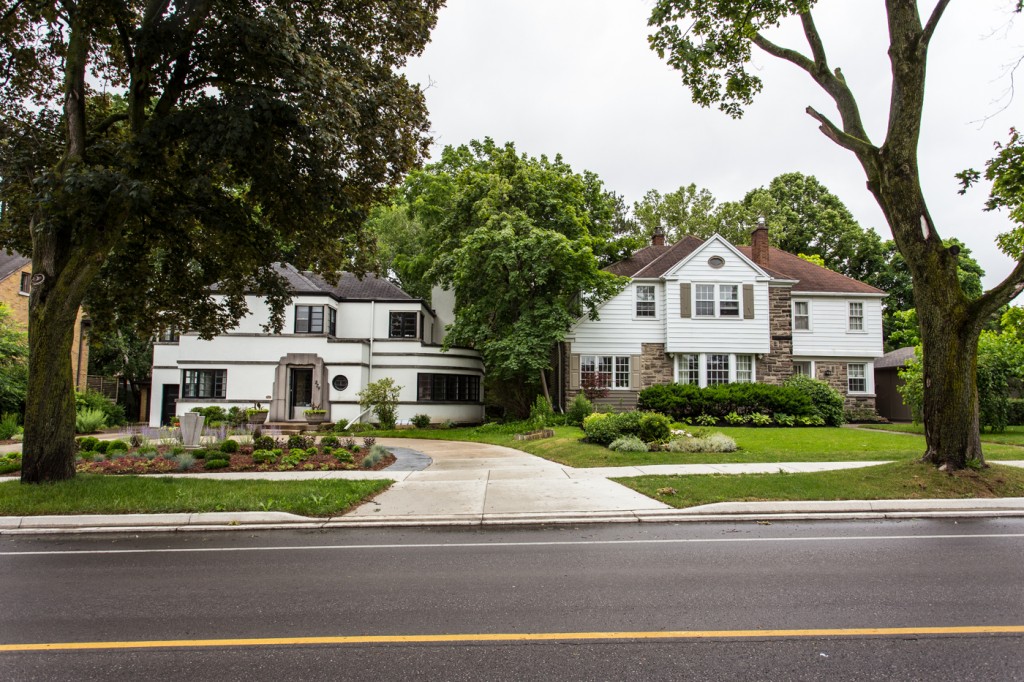 Even their most laudable mansions and memorable art deco facades owe their origins to successful bids for factories. That aforementioned AirBoss site was originally Dominion Tire. Over a century ago, Talmon Rieder brought Dominion Tire to Kitchener, helping to establish then-Berlin as an industrial powerhouse. Based in Montreal, with his family in Kitchener, Reider also influenced the design of the Westmount neighbourhood, which still shows some resemblance to Montreal’s Westmount.

What about rental units, you ask? Pricey, few, but growing. 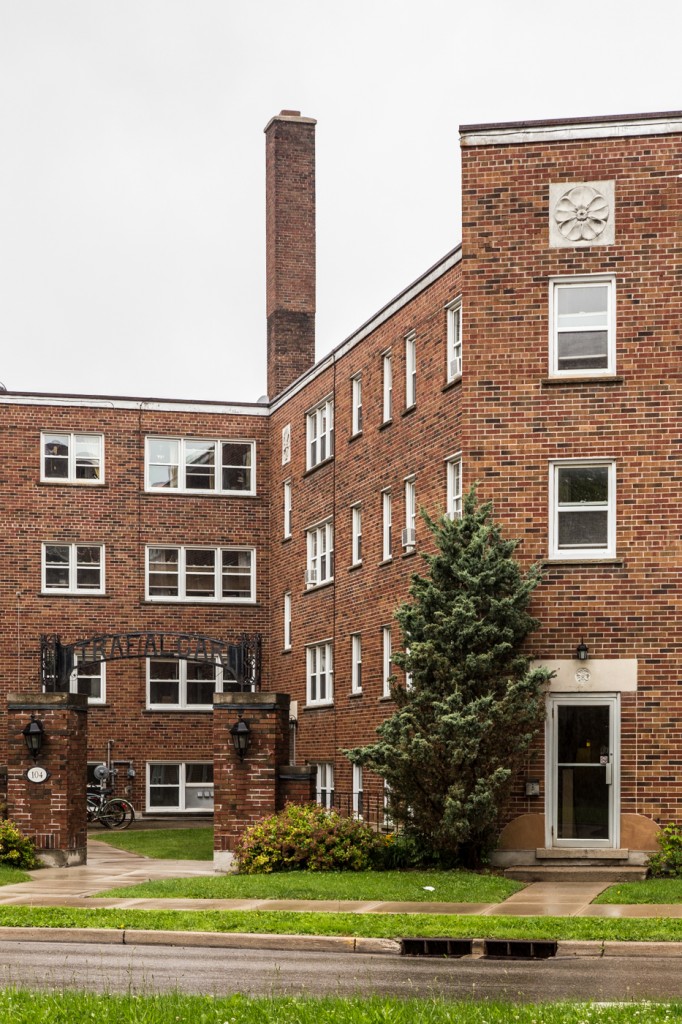 Only a handful of high-rise buildings prick the skyline in Belmont, but with more condos going up, and proximity to several transit corridors, the number of young professionals in the area may keep rising.

The central, most well-known bit of “Belmont Village” is a retail strip. Originally constructed as a make-work project during the Great Depression, a three-block slab of pavement and basic utilities (sewers, lights) were installed with high hopes for development of a convention centre that never came to be. However, the pavement served as a handy spot for midways, festivals, roller-skating and dances. 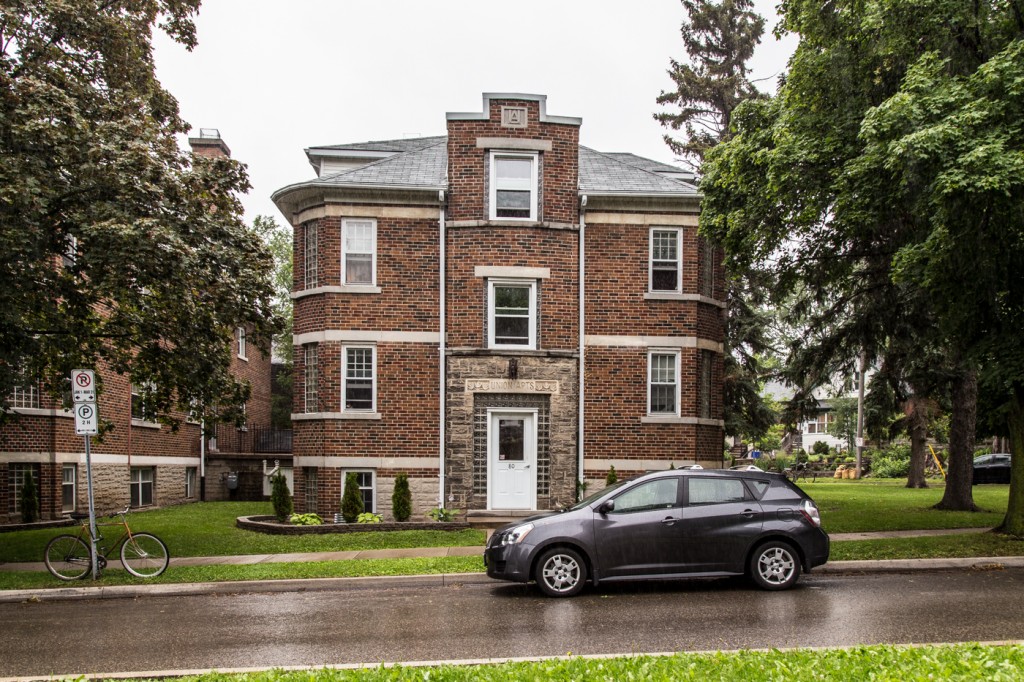 Kevin Wong, founder of JLB (Janet Lynn’s Bistro, named for his wife, now deceased), says he relocated from King Street in Waterloo to Belmont Village because Belmont Village rent was more affordable and he wanted to return to a smaller space. 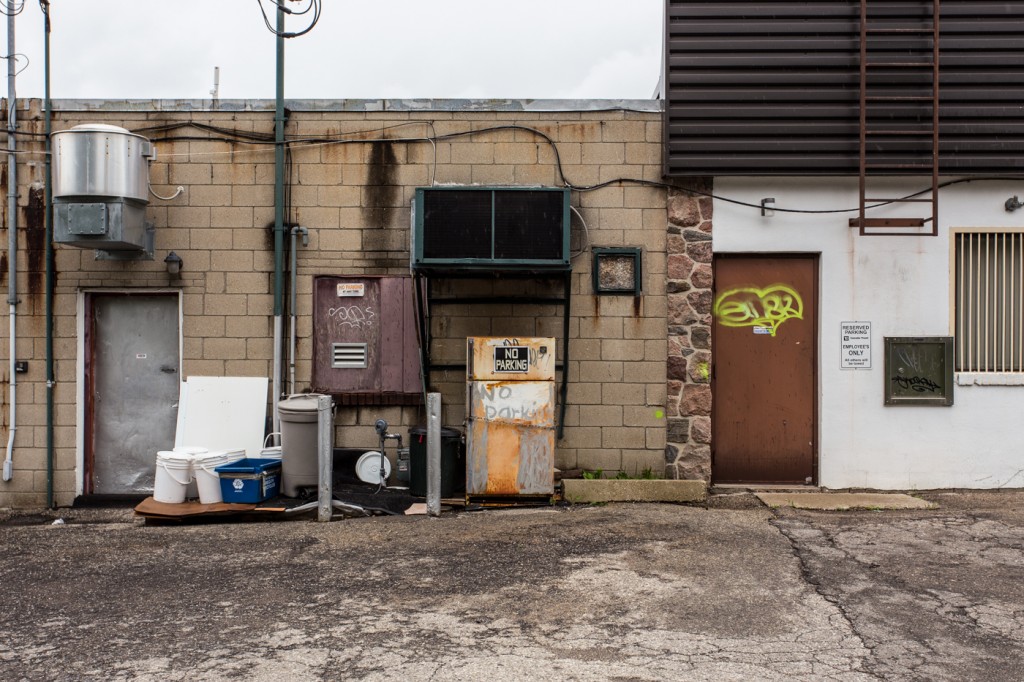 “We get all kinds of customers,” says Wong. “Since we’ve been operating since 1985, many of our customers I’ve known them since then. You can imagine that in 1985 we had customers that were 40 years old – and now they’re 70!”

JLB has one of several darling patios on the street, all lined in flowers, welcoming pedestrians to peaceful dining experiences outside of the KW core. Casa Rugantino (Italian), Belmont Bistro, and newcomer Raja (Indian)
all have patios attracting locals and visitors alike.

Belmont’s new outdoor market on Tuesdays is also ramping up. Wong said the JLB sourdough bread sold out in less than 45 minutes. No surprise, given the demographics here.

Philpott describes the area as “neighbourly.” Among local non-profit organizations and businesses, this sense of consciousness and generosity abounds. For example, the May Court consignment shop is, at a glance, a rather upscale boutique; 40 per cent of the selling prices go to local charities. All Things Tea sells farm-fresh eggs alongside their loose leaf teas and baked treats. Rawlicious caters to those who prefer a raw vegan menu.

For an neighbourhood of coveted real estate with living quarters for maids, stucco and timber facades,
and Elizabethan casement windows, Belmont’s big spenders certainly seem keen on sharing the wealth, too.