If Bike Lanes Could Talk: The Spur Line

A few years ago I found myself walking down a small, beat-up footpath. The trail ran beside some train tracks, between Regina and Roger Streets, near uptown Waterloo. It was starting to get dark, and I needed to make it uptown to meet friends for some serious birthday celebrations. Taking this path seemed like a good idea, right? Don’t worry, this is not the beginning of a horror story, but my experience with the newly re-opened Spur Line trail.

I still don’t know if this old footpath was an officially sanctioned trail at the time of my initial journey, but a lot of my friends and I used it anyway. It was a much faster way of getting between uptown Waterloo and downtown Kitchener, and my apartment at the time was conveniently right in the middle. Plus, we often joked about how we were living out Stand By Me, creating our own mini-adventures while we journeyed down a seemingly forgotten path. 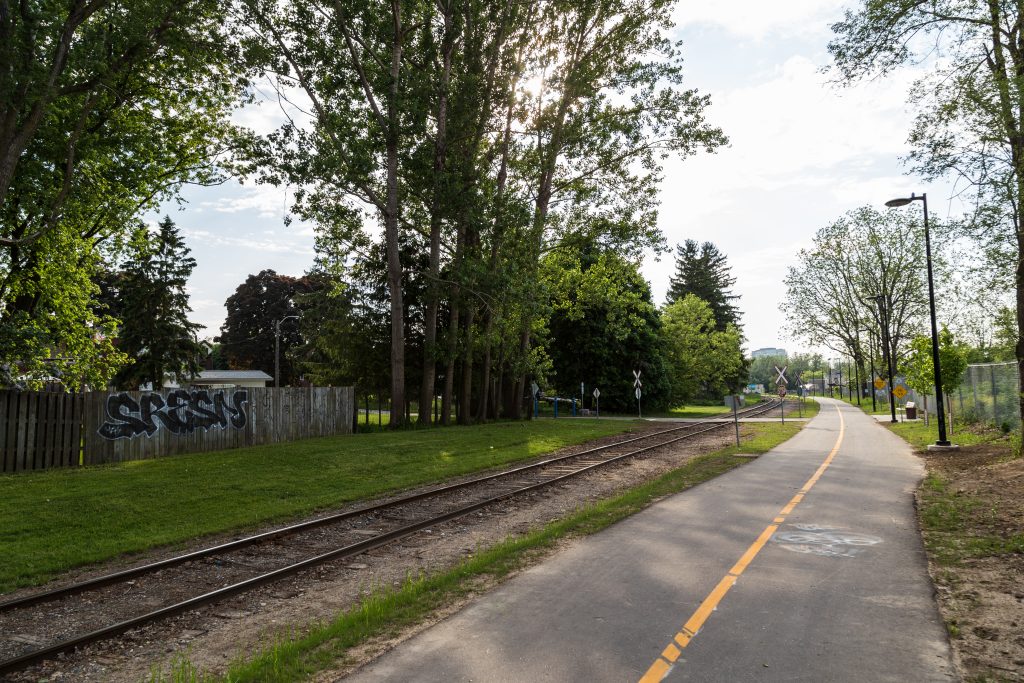 If you were to walk down the trail today, though, you’d likely feel like you were in a pretty safe place. The newly renovated Spur Line trail, which officially re-opened in April, is composed of a fully paved, two-way path that runs parallel to the train tracks, and sits a safe few meters away from where trains roll through at night. It’s also lined with street lamps, and has signage at every intersection that crosses a city road.

The renovations were started a couple years ago when the City of Kitchener invested $600,000 towards upgrading pre-existing storm water infrastructure. Then, Metrolinx, the City of Waterloo, and Region of Waterloo put together just under $5 million— $1.2 million, $1.5 million and $2.3 million, respectively — to give it a facelift. Now, you can easily and quickly travel along the trail without worrying about tripping over a tree root, or walking down a long dark path.

The Spur Line trail runs through many residential areas, as it stretches from Ahrens Street in Kitchener to Regina Street in Waterloo, and covers 2.4 kilometres of high-traffic space. It is a natural go-to route for the many families that live along the path; many backyards also back onto the trail, making it a convenient place for families and neighbours to gather. It also serves as a convenient commuter route for those living in the city cores, and is much faster to navigate than the winding streets and ongoing LRT construction. 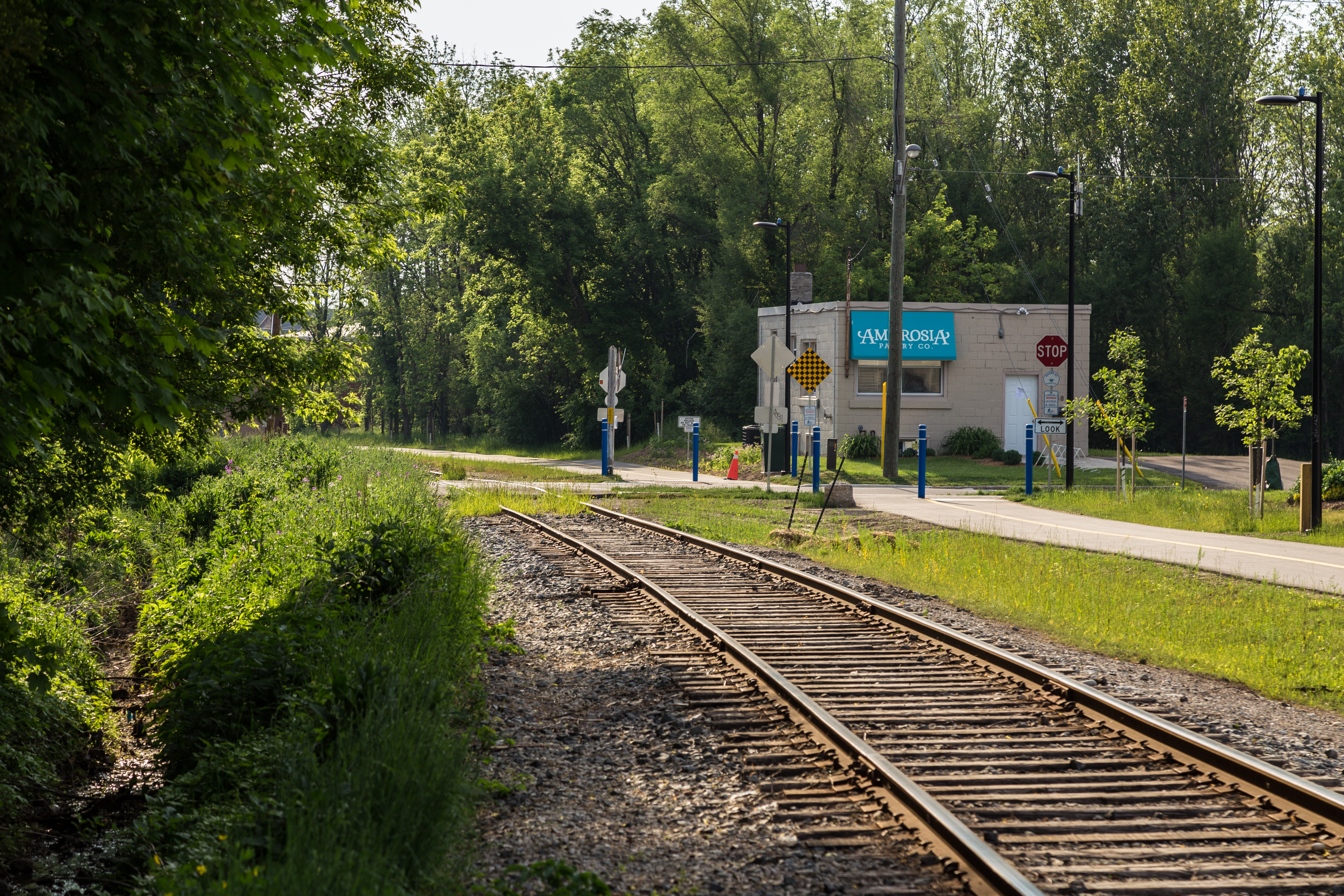 “I ride my bike to work … or I can also walk,” says Aura Hertzog, co-owner of Ambrosia Pastry Co., who lives in the Central Frederick neighbourhood.

“It’s really quick, if I bike it’s maybe eight [or] 10 minutes, and then if I walk it’s maybe 30 minutes. Personally and for business, we use it instead of having to jump into the car.”

Ambrosia is right beside the trail, where it intersects with Roger Street, and has experienced an increase in foot-traffic since the trail has been re-done.

“There’s way more traffic. We’re seeing it utilized a lot, there’s always people on it, where before people who knew it used it, but now it’s like people that never used it now are using it,” Hertzog says. “They’ll see people they know on the trail, so it’s a little bit of community happening as well.” 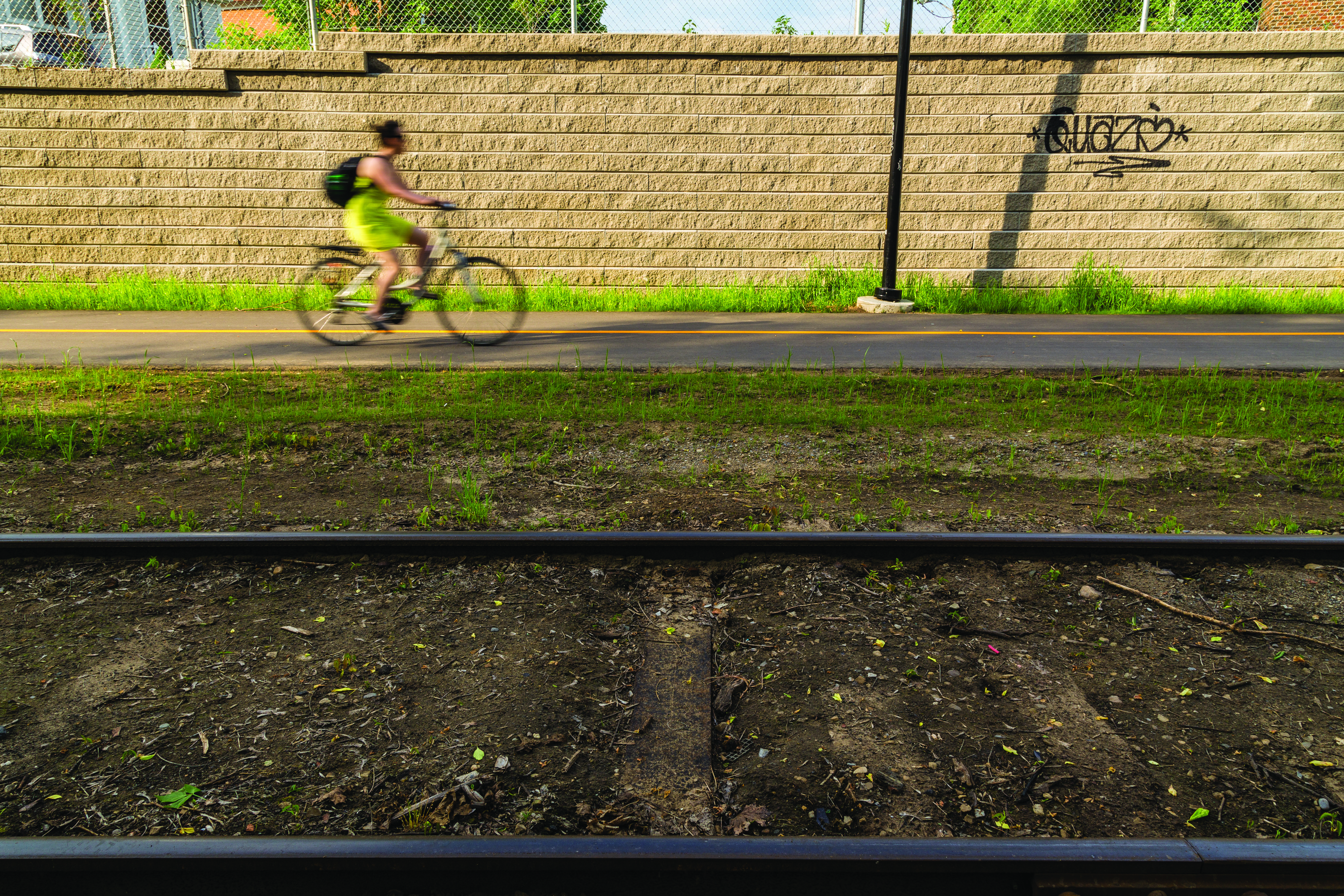 The trail is an encouraging outdoor space, which provides an almost picturesque walk for the wandering traveler. Either side of the trail is still covered with varying types of greenery, and, during some stretches of the walk, makes you forget that you’re actually travelling between city centres. You could be lost in the woods, for all you know, until you reach one of the intersecting city streets. Don’t worry though, if your mind does wander while taking in the scenery, the goose poop along the path will remind you that you are indeed in Kitchener-Waterloo.

The amount of graffiti tags in certain stretches of the trail will also bring you back into the urban setting.

“It’s just so ugly,” Hertzog says of the graffiti – one of the few small drawbacks of the trail in her eyes.

However, the positive aspects that the Spur Line trail provides greatly outweigh the negatives. Its function — providing a safe green space that provides more walkability between high-traffic areas — has become increasingly important in the growing region. Its fast, friendly environment allows people to move freely and enjoy some time outside while navigating the sometimes stressful lifestyle of the city.

Walking down the Spur Line Trail has been an evolving adventure over the past few years, and only proves to be more exciting as summer approaches.