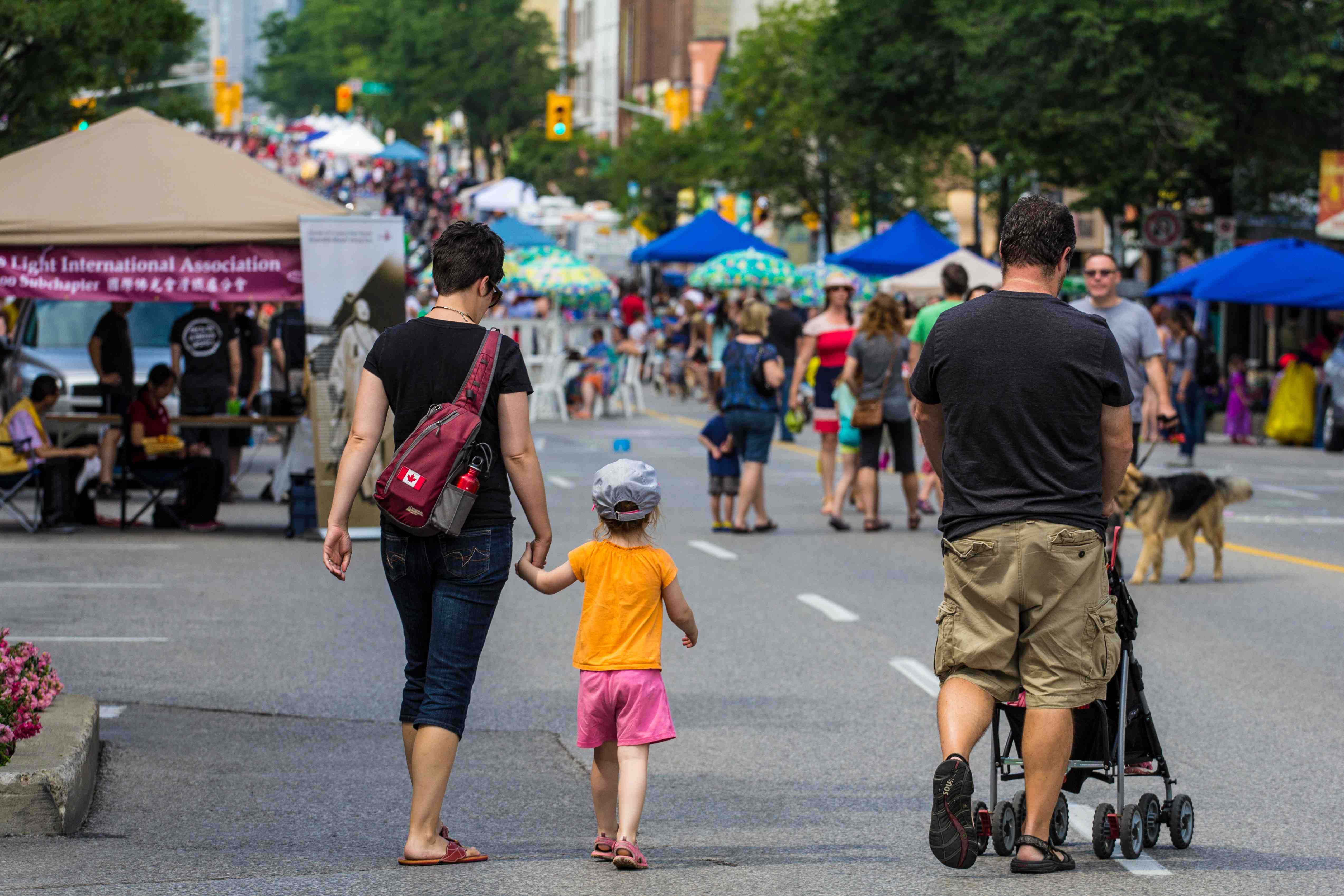 Getting lost in open space

Hints of sidewalk chalk line King Street, a telling sign. The space, now occupied only by its usual car traffic and the pastel coloured dust has shape shifted. Hundreds of Waterloo Region citizens very recently occupied the space now inundated with the wheeze of city busses, however they felt compelled; by foot, by bike, with music, with sport. Open Streets, uptown Waterloo’s participatory street festival was here encouraging all to use public space – an idea many find as fleeting as the sidewalk chalk left behind.

“It’s about place making, developing connection with a space,” says Juanita Metzger, long time community developer in Waterloo Region. “King Street is more than just a street for cars, it’s a place where things happen, a place you want to go back to because of the interactions you had.”

Metzger’s idea of place making, the widespread thesis of participatory, self-driven events like Open Streets has met the community with great challenge.

Waterloo Region, a seeming epicenter of arts and culture focused events like Grand Porch Party, Open Streets, Summer Lights, Art Markets, Night\Shift and CCE’s own Steel Rails calls on the community often to arrive with engagement in mind, with the ability to make their own fun.

Privatization of space is widely regarded as the root of this discussion. Anita Blanchard and Tom Horan, prominent thinkers on public space of Claremont Graduate University cite this privatization as cause for a shift from city space to cyberspace, and an initiation of online communities, particularly among young people, regardless of city.

Melissa Durrell, Councilor in uptown Waterloo and chairperson of Open Streets nods to the ‘eight-80’ principle, noting that spaces should be accessible, enjoyable and diverse enough to cater to the needs of anyone, whether eight year olds or eighty.

This principle is responsible for the growth of open streets initiatives across the continent. Waterloo Region isn’t the only group struggling with re- claiming the oft-forgotten skill of self-made fun.

“Communities spend more money on their streets than they do parks, so this is how they can — even if for one day — give it back to the citizens,” says Durrell.

A number of the aforementioned festivals have evolved in tandem with their hosting community. Open Streets, the festival that literally boasts the lack of structured programming in its name, is no exception. Beginning in 2011 at the hands of Durrell and downtown Kitchener Councilor Dan Glenn-Graham, Square to Square, a 2.5 kilometer long, closed street party asked individuals to come prepared with their own programming.

“I remember seeing feedback on Twitter that said something like ‘there needs to be food trucks, more organized activities, more booths,’” says Metzger. “But that’s not the point of things like Open Streets though, you need to create your own sense of connection.”

The efforts of many to connect in this way should not go unnoticed. Metzger noted that to date, many are capitalizing on the vastness of King Street, or whatever space Waterloo festivals offer them.

“I saw a family walk onto the street, hockey nets in tow, hockey sticks over their shoulders,” she says. “They had the right idea, they made that memory without being told or directed.”

Durrell has hopes that Open Streets can reverse the learned hesitance in use of space without direction.

“You’ve got to take responsibility for yourself and be a part of it,” she says. “The Waterloo Tennis Club is there, they’re not putting tennis rackets in your hand, but they’ll encourage you to do it on your own.”

Whether or not attendees pick up the proverbial tennis racket depends on how they regard a space newly available to them, and if they’ll do so memorably.

“It’s based on relationships, to the space, to the people you experienced something with,” says Metzger. “Right now, after the street is cleaned up, there’s nothing to remind people that the street is more than a street.”

Open Streets is acting as a sort of microcosm of societal ability to create fun. Metzger is reminded of a child’s lack of regard for the official purpose of the space they’re in, where an attic can be a castle; a street can be a place for gymnastics.

Participants, then, are left in a ‘catch 22.’ With too much regulation, a road looses the opportunity of a large flat space that can be drawn on. Without any structured planning, individuals seem to get lost in open space, and struggle to spark the idea to use the street as a hockey rink, as a stage, as a canvas for the pastel chalk dust scattered across the now busy street.