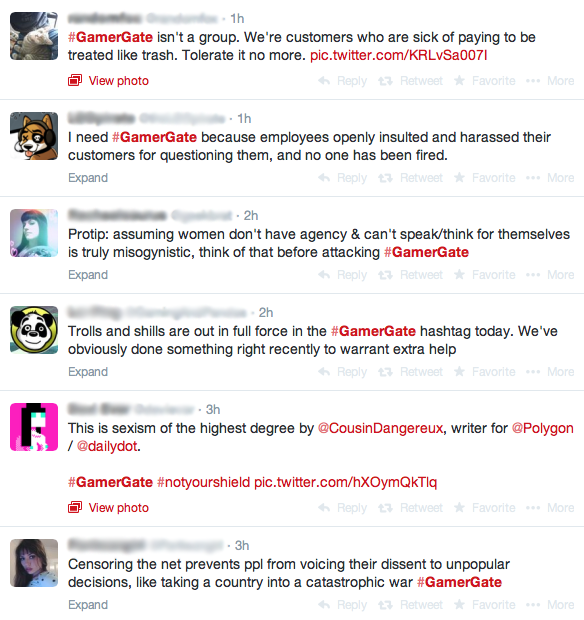 #GamerGate: The State of Gaming

A group of gamers aligning under the banner #GamerGate have started a targeted campaign against females in gaming, as well as those involved in the rise of independent video games.

Imagine a multi headed hydra with no real focus or leader, lashing out through social media, and in some cases committing acts of targeted malevolence.

This is a group of individuals who believe the gaming industry has experienced an injustice, and they seek to make it right; or at the very least, ensure those involved suffer.

Emma Vossen, co-founder of the GI Janes; a community of female gamers at the University of Waterloo, describes the situation as an unfortunate ultimatum where “we have to choose between talking about games or being harassed.”

#GamerGate had been lurking in darkness until August when it attacked game developer Zoe Quinn, creating one of gaming’s largest cyber attacks and shaming campaigns.

Quinn, the creator of text based choose your own adventure game Depression Quest, was shamed across 4chan message boards and public forums with verbal assaults and the circulation of intimate pictures. She had previously dated another video game developer, and when it was discovered she had been involved in an affair with a games journalist, the flood gates opened.

The #GamerGate community created a straw man argument claiming Quinn was a key member of the web of deception that directly undermines videogame journalism – that she was one of the so called many who leverage relationships to receive positive press for a game, and drive her own ‘pro-female’ agenda.

“What I’ve seen lately is (game) developers standing up for their own… so when people started targeting Zoe I got really mad,” explained Vossen.

After an attempt to defend Quinn on Twitter against these allegations, York animation student, and game developer Sedona Parnham received a tweet stating, “pretty much by defending Zoe you are saying women should have to sleep their way to the top in the industry. Sick.”

This kind of allegation suggests to female gamers that the actions of one have repercussions across a whole gender, regardless of whether or not there is validity to the claim made against Quinn.

Alongside Quinn, game and cultural critic, and host of the Youtube series Tropes VS Women in Games, Anita Sarkeesian, has been called out as a fellow conspirator due to her critiques of games that portray women as nothing more than princesses in castles waiting to be rescued, or highly stylized pieces of eye candy. Because of her cultural critiques she’s been placed in the #GamerGate spotlight and targeted ruthlessly.

Sarkeesian and Quinn were both recently doxxed – someone’s true Internet identity and addressed are exposed through hacking – and have been forced to leave their homes because of threats made on their lives. Side note: Sarkessian has collected some of these and posted them online. Research into these should be done with knowledge of a very strong trigger warning, and graphic content.

Gaming has gained traction over the past decade due to increased accessibility from both a creator and participant perspective. Keeping hundreds of casual games on your smart device for mere dollars is not unheard of. If you want to create a game, you no longer need thousands of dollars, or hundreds of people. The time and financial investment to create a video game has decreased, and the gaming community has showered awards and praise on games built by small teams, that cost little to play compared to their A-list counterparts. With this shift, gamers are starting to see more diversity in what games can be and how they’re played.

Elise Vist, another member of the GI Janes approves of the new status quo.

“Why do I need to know what it feels like yet again to be a grumpy bad-cop, good cop whose avenging his wife? What’s interesting to me is putting myself in the position of someone I’ve never had to feel like before.”

Winner of multiple ‘Game of the Year’ awards, Gone Home, places you in the shoes of a young female returning home from a semester abroad. The exploration based games story relies heavily on the exploration of sexuality and marital roles, something not previously discussed at length in a videogame. There is no high score, there is no fail state and there are certainly no monsters waiting for you. This is a game solely designed to tell you a story,

Quinn’s Depression Quest is similar, placing you in the role of someone suffering from depression. This “choose your own adventure” gives players a chance to experience the struggle in making the decisions that influence your day. Again, it’s not a game in the style the traditional video game fan may be used to.

Vist finds this shift to be a powerful tool.

“Embodying the experience is so different from reading about the experience, and that’s something that only games can offer us and that’s why we can’t just abandon games as a medium of expression because people don’t want us there,” she explained. “We have to be part of that space because otherwise all the possibilities of that medium are locked off.”

Gaming journalism is seeing a similar rise. No longer bound to the strict confines of print deadlines and strict advertising dollars, journalists are able to report on the stories that interest them.

Not coincidentally these are stories that involve games that are changing the status quo. New thought provoking pieces are not only changing how gamers play games, but how they are understood and reflect the world around us.

Independent game journalists are also accused of being a part of the network Quinn, Sarkessian and others are – a group dedicated to undermining “true” gamers, and evangelizing games that are doing something different. The ones #GamerGate is criticizing of not being real games at all.

While most are embracing the evolution, some are still holding onto the past and ultimately #GamerGate has a wider lens than just video games.

Vossen explains, “It’s not just about games, it’s about larger systemic issues in cultures and this is exactly what a backlash is.”.

In the end Vist believes there may be a silver lining if everyone outside of #GamerGate rallies together.

“I think what happens here can help shape future backlashes like this. If we can point to how #GamerGate finishes and go, look, the only way we got through it is by sticking together, protecting those who need it, and just doing it; and not blaming those who can’t.”