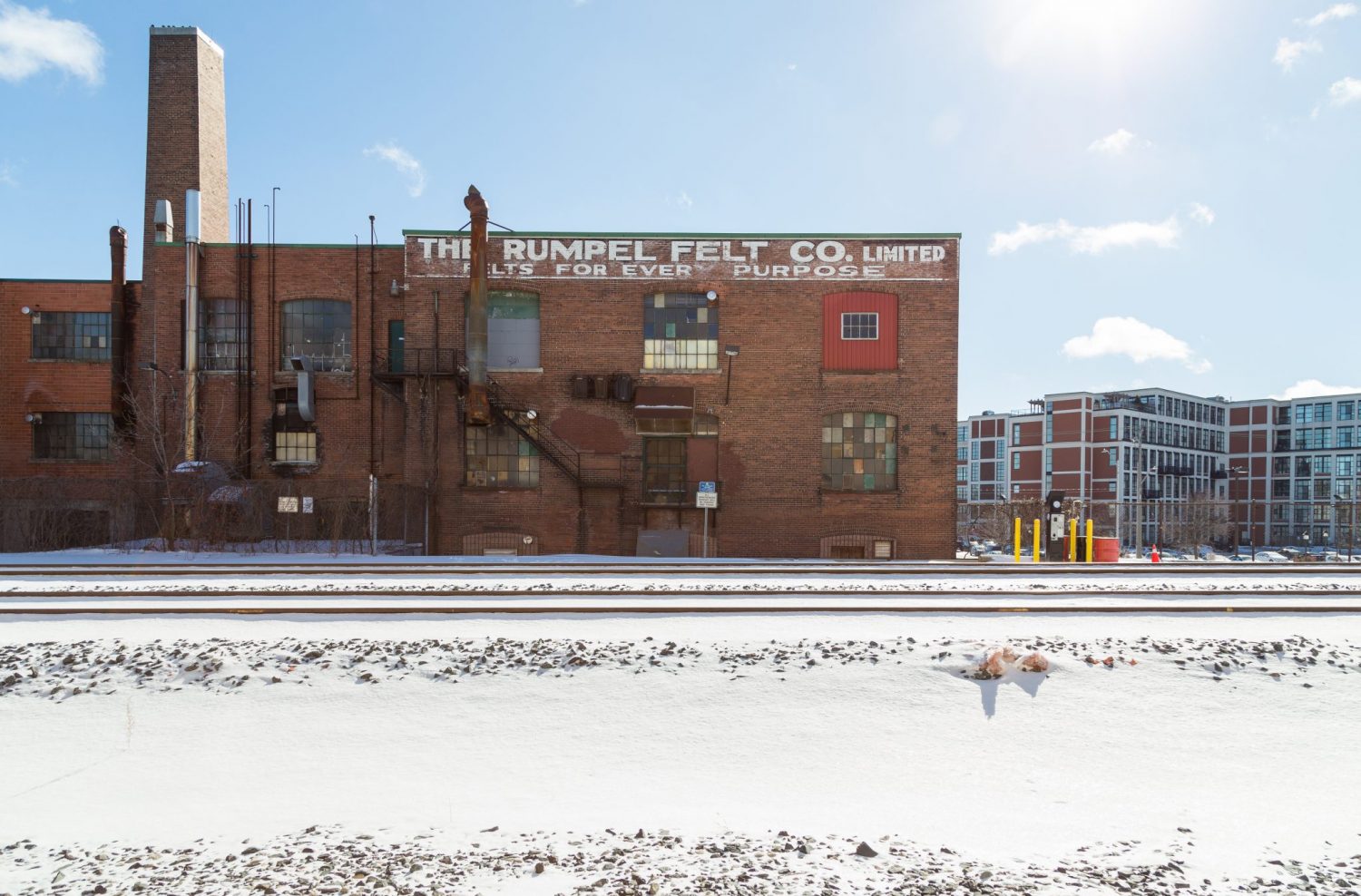 Four More Buildings That Deserve A New Life in KW

Recently Deloitte Canada opened its new office in Kitchener with great fanfare. But not long ago, the Hide House was a forgotten part of the Lang Tannery complex. A demolition permit was issued in 2010 to tear it down along with three other buildings on the same block, to make way for parking so that the main complex of buildings could be redeveloped into what we now know as the Tannery.

Originally, it was named the Tannery District, evoking the vibrant community in Toronto called the Distillery District. A grassroots movement rose up to save the four buildings, as people recognized we risked losing important elements of our cultural heritage landscape — only the chimney received heritage recognition. We also risked losing the unique opportunity promised by the name, as much of the buildings that made up the main Tannery block had largely been empty and unused for decades, just as the Gooderham and Worts site had been in Toronto.

As part of that grassroots movement, I celebrate the new life that has been infused into the Hide House. Replacing the gravel parking lot that remained, four years longer than promised, with what could be a vibrant people place is also cause for celebration.

As a community, we’re lucky that the Lang Tannery remained to be adaptively reused. Some of the credit for that goes to owners that leased out sections of the building. Having people occupying it daily surely helped to ensure that it was not at risk of being damaged beyond repair.

Other local buildings have not been so fortunate.

One of those is 48 Ontario St. N., the former Bell Canada and Legion building that gave birth to the blues in Kitchener. It sat empty for more than 15 years, despite being a building identified as having heritage value and being owned by the City of Kitchener. After the demolition of the Mayfair, a grassroots group evolved to raise awareness about why the city sold 48 Ontario St. N to be redeveloped. That sale in itself is significant. Unfortunately, the work has yet to begin and likely won’t for some time. Still, as a member of the advocacy group “Friends of 48 Ontario,” I remain optimistic that it will again be occupied and lively.

But what about the other buildings that sit vacant in the Region? Will they face the same neglect as the Mayfair, or will they be purposefully revived like the Lang Tannery complex? 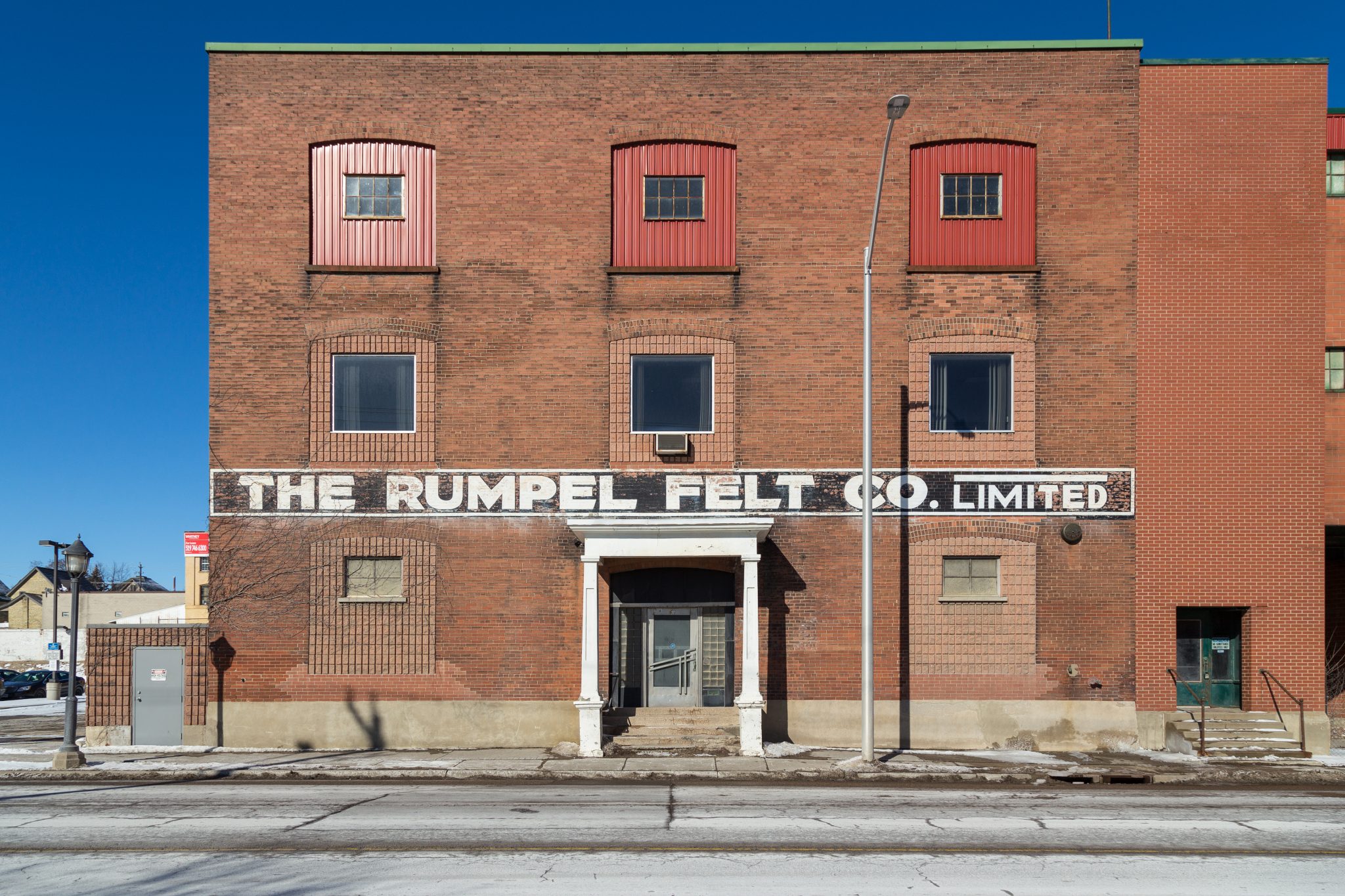 The future of the Rumpel Felt factory, on Duke and Victoria, appears to be the brightest on this list of buildings. It is part of the property that is to be redeveloped to include the Region of Waterloo’s Central Transit hub. Even better, the original factory, built in 1913, is a designated heritage building and therefore to be incorporated into the planned mixed use development.

The rest of the building, though, is slated to be demolished. I tend to be a glass half full kind of guy, but after having a chance to see inside the factory when it participated in the 2013 Doors Open, optimism just isn’t good enough. Every square foot of that factory oozes potential for redevelopment as it reminds me of when I got a chance to see inside the Forsyth Factory that has been replaced by the City Centre condos after it needed to be torn down.

Since the most-sustainable building is one that is already built, I’d love to see the whole factory incorporated into the redevelopment. 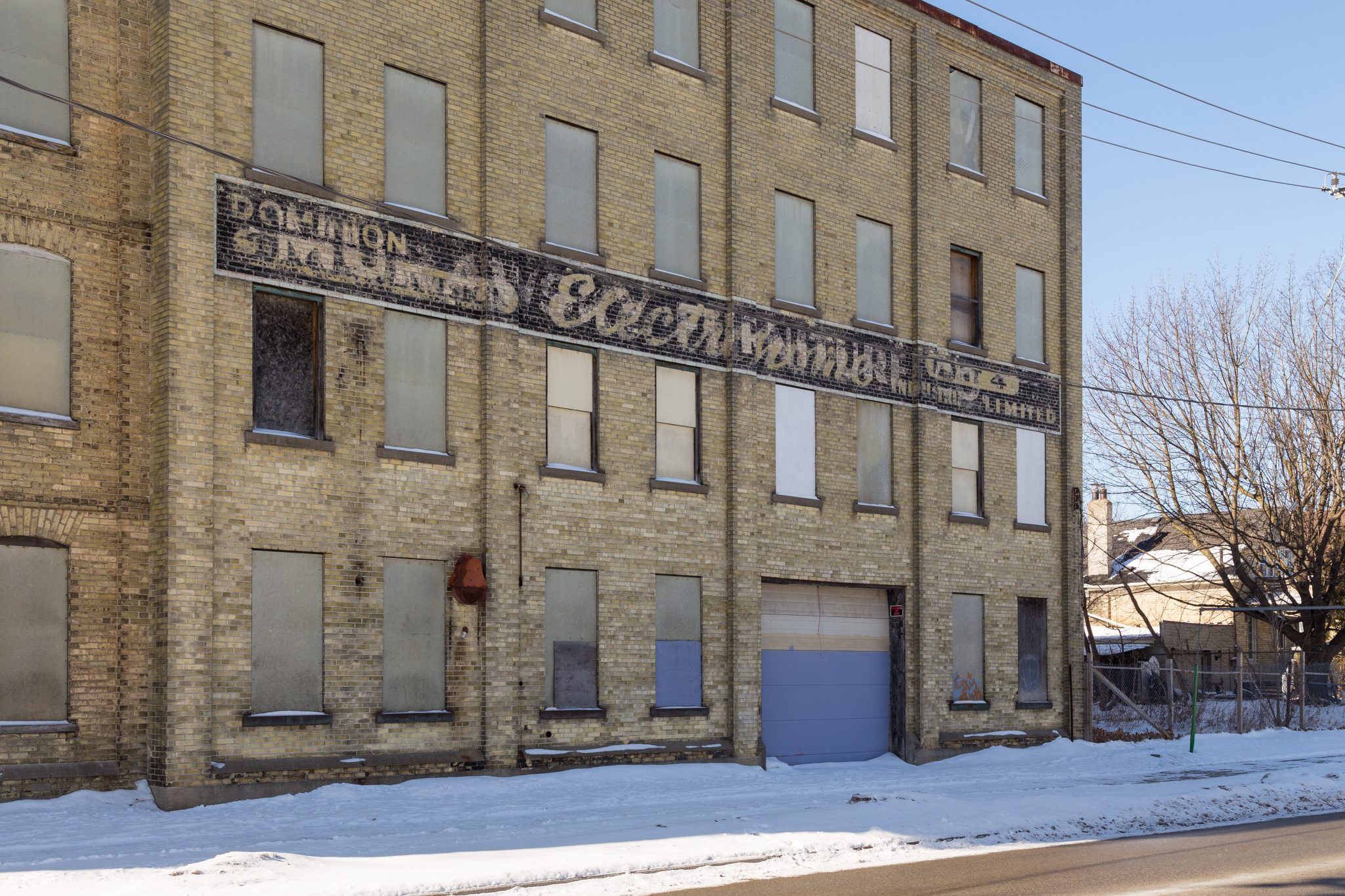 A glimmer of hope exists for the long-time eyesore at 152 Shanley. After decades of neglect, problems with poor tenants and a failed tax sale to recoup unpaid property taxes, the City of Kitchener is trying again with a reported listing price of $423,000. Any new owner will need to deal with a hazardous waste spill from paint being poured down the drain that has made anyone who considered developing the property nervous.

There had been talk in the past that it could be turned into condos while some nearby residents dream of it being a community arts centre. City staff suggested in the fall that it’s best used for commercial or retail uses.

A charrette is planned for the first half of 2018 to brainstorm possible uses for the site. The walkability of this neighbourhood means that this site could feature some mixed uses desired by the residential neighbourhood that surrounds it.

Time is of the essence, though. The building was declared structurally sound in 2012, but having seen some interior photos, it can only be a matter of time until weather or an infrastructure failure requires demolition as happened with the Forsyth Factory and the Maryfair. 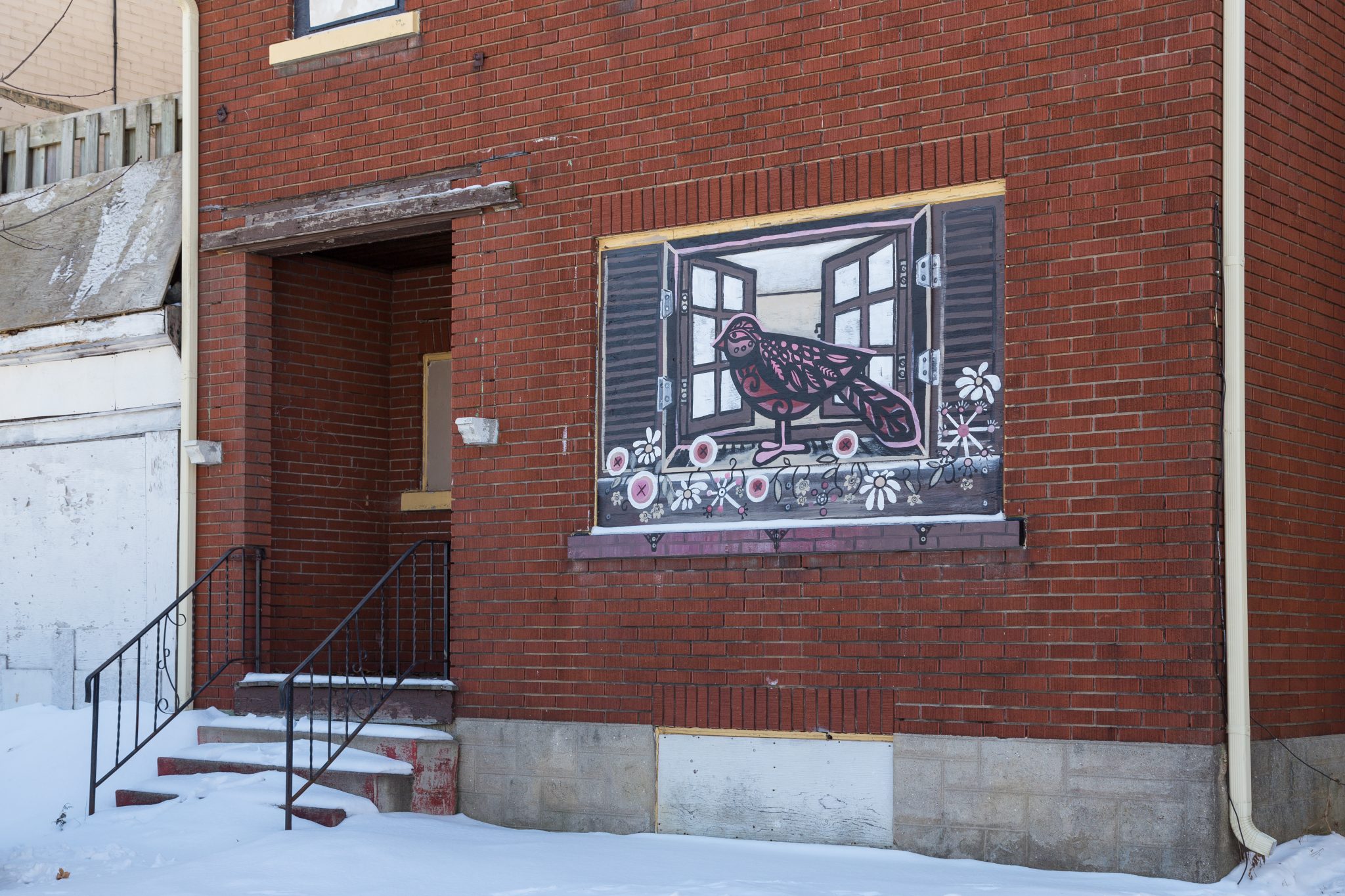 Cober Printing got its start in this corner store when its owner started printing his own promotional material. Before long, printing turned into its own business and moved down the street. The corner store continued to operate at least into the 1970s. For decades though, it has been empty, boarded up and neglected as an out of town owner holds onto it for nostalgic reasons.

Its neighbourhood is concerned about the building being a hazard to nearby homes. It may already be beyond adaptive reuse. Hope still exists though as demonstrated in a campaign by community builder Laura McBride, who last year, took photos of people outside the building sharing their dreams for what new life could mean for the building. McBride also spearheaded transforming the outside of the building by installing art over the boarded up windows, so that, at least temporarily, it provided some value to the neighbourhood.

I could see it being used again as a variety store but likely with a twist. Perhaps featuring a chef operating a takeout restaurant? 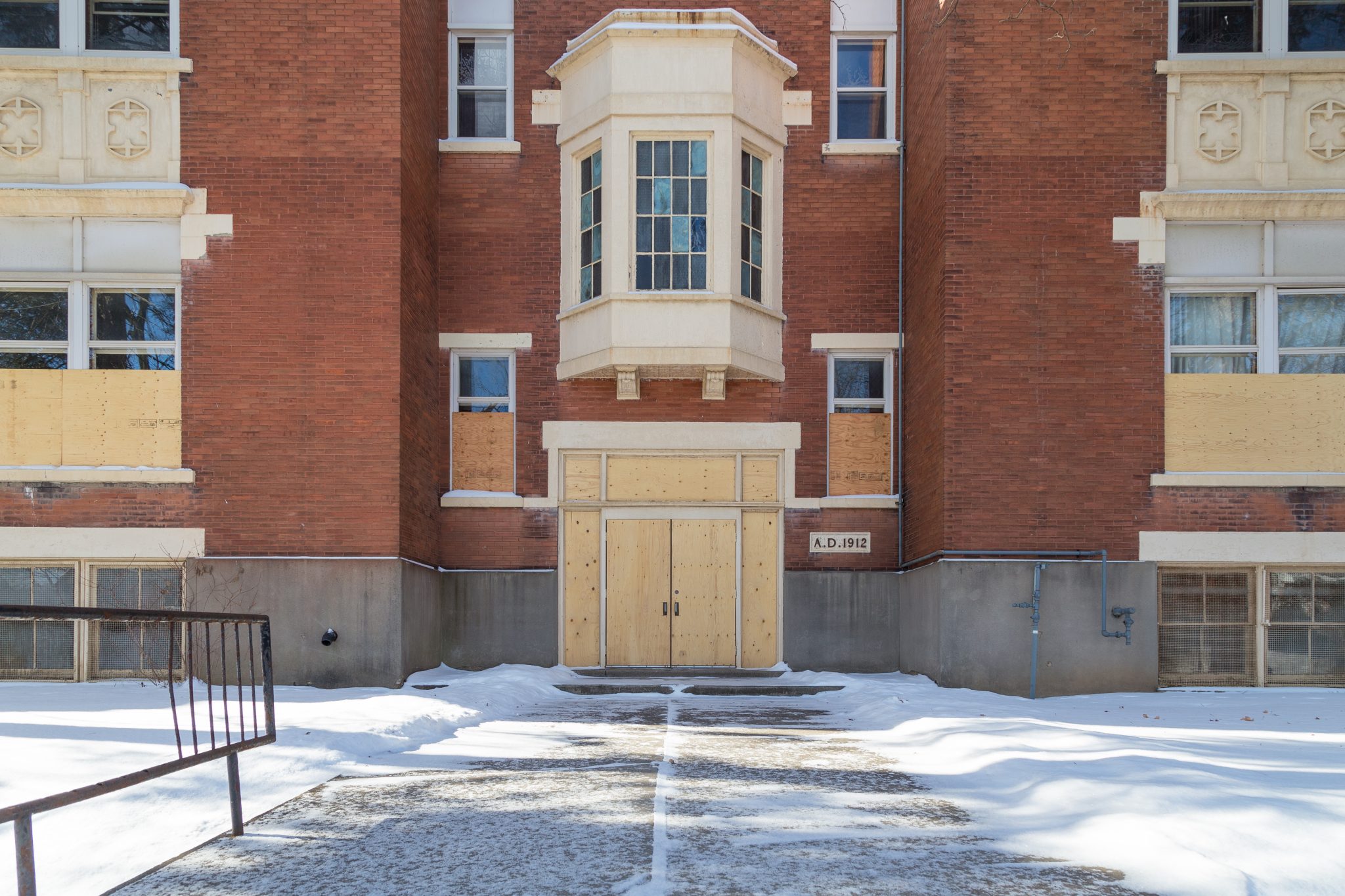 Sacred Heart School is just a few blocks away from the hottest real estate in Kitchener — the neighbourhood surrounding King and Victoria. Near the Moore and Louisa intersection, the school is close to the Breithaupt Block development that houses Google, which is now building a new building across Breithaupt Street. The Sixo development is also just on the other side of nearby King St. W.

The first four classrooms of this registered heritage building were built in 1912. Closed due to low enrolment and sitting empty since 2005, when the Waterloo Region Catholic School Board moved all its offices to its new board office in the original St. Mary’s High School, the school holds great potential. While it remains owned by the Catholic school board, a sale is pending. The Roman Catholic Diocese of Hamilton had expressed an interest in it in 2016.

While the building oozes character and could easily be desirable as a brick and beam for high tech work spaces, I think the best use to be residential loft condos, similar to the Kaufman Lofts. It’d be great if it could be a mixed use development that included a cafe or restaurant and live/work spaces for artists.

What buildings do you think deserve a new life?

I’m sure there are many other empty buildings across Waterloo Region that could be adaptively reused and given new life.

I’d love to hear your suggestions. Tweet me @JamesHoweWR to contribute to the conversation.