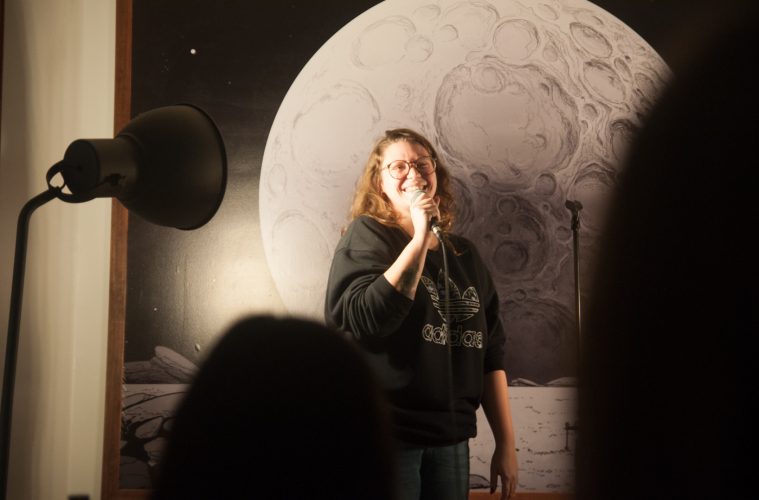 Feminist Comedy at the Princess Cafe

The cozy Princess Cafe in uptown Waterloo recently hosted a Feminist Comedy Night. Four comedians performed: Jess Beaulieu, Natalie Norman, Aisha Brown and headliner Chantal Marostica. These strong, successful women shared their personal experiences with feminism in a refreshing way: with a sense of humor. With Beaulieu as the host, each performer’s comedy made it possible for the audience to share in a discussion about feminism.

While different people shared questions or concerns with me about the title of the event, calling the show a Feminist Comedy Night suited the performers, who all identify as feminist comedians.

“The show attracted a lot of attention based on the name alone,” said Marc Leconpte, owner of the Princess Cafe and organizer of the event. Tickets sold out days in advance, so in that way was certainly a success.

Feminism is not only for women, and there were a handful of men in the audience. “Of course men can be feminists too,” said Leconpte, “but it’s important for women to be the voice of feminism.” When asked to describe feminism, Marostica said “it’s about taking steps so that everyone is included.”

The topic is clearly difficult to define, because it can feel so personal and yet universal. “It’s like trying to define something that is uncharacteristically mine,” added Leconpte.

Some people equate being a feminist with being a certain type of man-hating woman, but the performers demonstrated how it is also about being inclusive of all people. It’s about believing in equity, and connecting people to each other—laughter makes that connection easy.

“The feminist argument is about being who you are and being comfortable with that,” Marostica, the headliner, explained. “If everyone was equal and accepted, there wouldn’t be a need for feminism,” she continued.

So when people ask why do women need their own comedy night, the question really is, why not?

The Princess Cafe regularly holds comedy nights, with performers who identify in many different ways, and is planning on holding more like the Feminist Comedy Night in the near future.