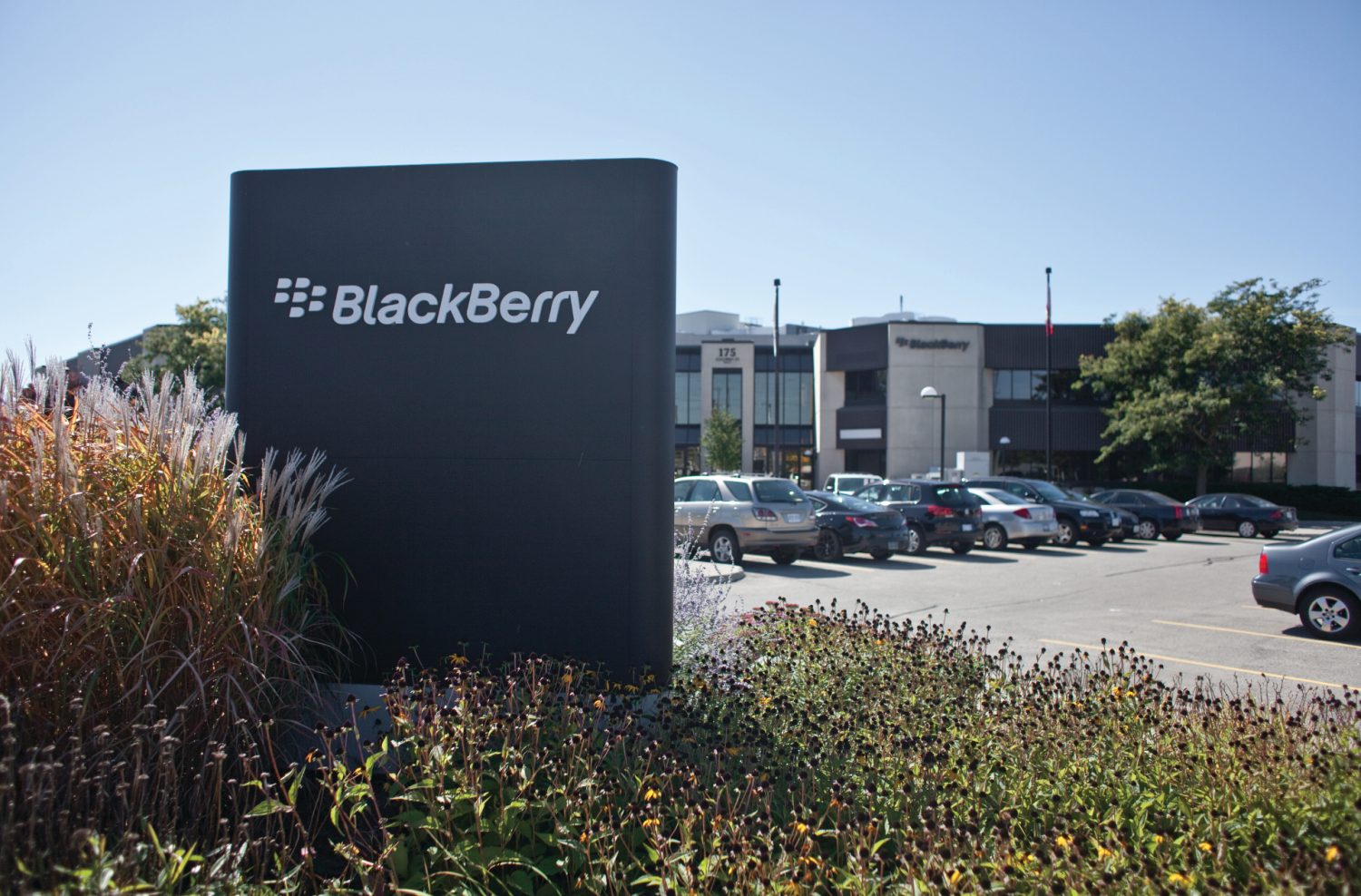 Collapse of a tech giant

A recent announcement that Fairfax Financial Holdings wants to purchase BlackBerry has many speculating about the company’s future. (Photo by Ryan Hueglin)

BlackBerry recently announced that it has entered into a letter of intent to be sold to a consortium led by Toronto- based Fairfax Financial Holdings, after posting a loss of more than $950 million in the fourth quarter.

This is just the latest twist in the BlackBerry story. In its prime, the company employed more than 20,000 people and had 80 million subscribers. They were considered one of the biggest Canadian business success stories, but now layoffs and revenue losses have critics wondering if this is the end of the company and Waterloo residents are worried about the potential loss of a major employer in the community.

Despite this, there are still signs that point to a positive future for one of the biggest players in Canada’s tech sector. It has left everyone wondering: what’s next for BlackBerry and Waterloo?

BlackBerry is most often associated with their handheld smartphone devices. But the company, started by University of Waterloo graduate Mike Lazaridis and University of Windsor graduate Douglas Fregin in 1984, began life as a technology consulting firm called Research in Motion (RIM). Lazaradis had been interested in wire- less communications from an early age. In a February 2013 article about RIM, The Verge
reported that

Lazaridis was experimenting with transmitting text to televisions with ham radios in high school. It was this interest that eventually led him to focus on wireless technology.

The breakthrough for the young company was when they successfully created a system for pagers to send messages to one another — the forerunner of texting and wireless emailing.

In the years that followed, Lazaridis and his team would continue to develop their wireless device, introducing a number of small, pager-like devices on the market. It was the premiere of the BlackBerry in 1999 that really got them noticed. Jim Balsillie, who joined the company in 1992, set about getting the phones into the hands of politicians and business people.

“Any consumer BlackBerry uses is a spin-off from the initial user,” said Armine Yalnizyan, a senior economist at the Canadian Centre for Policy Alternatives. “Everybody wanted one so they opened it up to the consumer.” The phones offered some- thing no other telecom company could: a sophisticated way to communicate quickly and securely.

It seemed RIM could go nowhere but up — until 2007, that is, when the Apple iPhone debuted. Rather than creating a phone that would eventually trickle down to everyone, Apple created a smartphone that was accessible from the beginning.

“[Apple] basically said, ‘[BlackBerry] is for
nerds. Let me give you a cool tool that you can watch video on and take pictures with and have your music on,’” said Yalnizyan.

BlackBerry was slow to respond to the new challenges of the iPhone and later the Samsung Galaxy series — so slow that they doomed their own smartphone business, ac- cording to some critics. Meanwhile, their at- tempt to break into the tablet market in 2011 with the Playbook was met with poor re- views. That year, RIM saw the first round of major layoffs.

Lazaridis was right to bet on wireless technology — but as it currently stands, BlackBerry has been muscled out by sleeker, more user-friendly mobile models. In December 2005, BlackBerry held more than 20 per cent of the United States mobile market. In December 2012, it had fallen to about five per cent.

Job losses – now and for the future

In Waterloo, the many people who rely on BlackBerry for income have most keenly feel the blow. More than 10,000 employees have been laid off over the last 10 years, with significant impact on the infrastructure that has built up around the company in Waterloo.

Wilfrid Laurier University and University of Waterloo both have many graduates who are looking for employment in Waterloo’s storied tech sector. “At one time it was hundreds of [graduates] from Laurier who found their way into BlackBerry in some way or an- other,” said Hugh Munro, the director of the MBA program at Laurier. While he couldn’t be certain what kind of impact the job cuts would have on job prospects, Munro said he expects it will impact MBA graduates seeking employment.

The two schools also rely on BlackBerry as an employer for their popular co-op pro- grams. In 2012 Laurier placed about 50 students with BlackBerry for co-op placements, mostly from the business program.

“Co-op roles have been significant to [BlackBerry] in the past,” said Karen McCargar, the associate director of co-operative education at Laurier. “We hope that will continue to be the case but we just don’t know.”

BlackBerry refused to comment to The Cord outside of the information provided in its press releases, which stated that it will reduce its workforce globally by 4,500 in this most recent round of cuts. There was no indication as to whether that would include co- op or intern placements. On BlackBerry’s recruitment site, they had postings for about 30 co-op placements and internships.

“I don’t have any inside info,” said David Taylor, the director of the David R. Cheriton School of Computer Science at the University of Waterloo. “But an obvious easy way for a company that is in financial trouble to cut back is to stop hiring co-op – it’s easier than laying people off.”

He estimated that there are 200 students university-wide who are placed at BlackBerry for co-op. “It’s not going to be a huge issue,” he said. “But it will clearly be an issue because we don’t get every single co-op student a job as it is now – that’s potentially some more students without jobs.”

A new path for BlackBerry

It’s a safe bet that most Canadian’s didn’t know who Prem Watsa was until he made the news as one of the key people behind the potential sale of BlackBerry to Fairfax Financial Holdings, the company Watsa has ran since 1985.

Despite his low public profile, Watsa is a big player on the international finance scene. Some describe him as a Canadian Warren Buffet because of his reputation for making smart investments and making a lot of money doing so — his company has $37 billion in assets. He is a former board member at RIM, but stepped down as he began to pick up shares of the company, which now stand at 10 per cent.

“He’s seen this shop from the inside out so he knows its essential work,” said Yalnizyan. “He wouldn’t be investing in it, presumably, if he didn’t think it was a good buy.” The other rumoured members of the consortium Watsa is putting together to purchase the company are also lending confidence to the future of BlackBerry; the Canadian Pension Plan Investment Board (CPPIB) and Ontario Teachers Pensions Plan (OTPP) are two pension funds that are not interested in risky investments.

Yalnizyan noted that Watsa’s proposal to take the company private — taking it off the stock market — may stop further financial damage caused by the markets for the time being.

“The vultures were circling,” she said. “You can make money off of hedging stocks and selling them so the company does fail.” It was a situation that was causing the market itself to play a roll in BlackBerry’s fall — a fall that is not inevitable given that the company still has the largest patent portfolio in Canada, millions invested in research and development and $2.6 billion in its coffers.

BlackBerry also still has something that many other tech companies don’t: security. “The people who want security will pay big for that security,” Yalnizyan said. BlackBerry’s products are still considered the most secure on the market, something that is desirable in their original market: government, military and business. It’s little wonder than that BlackBerry has announced it will now begin to focus on the enterprise market.

“One of the things that people seem to have lost track of is that we were known for technology even before BlackBerry came along,” said Taylor.

It was certainly what attracted Lazaridis to come school in Waterloo in the beginning, and it’s what attracted more technology companies to the region. While BlackBerry has been the big name in town for some time, OpenText, Google and Desire2Learn, among others, continue to grow.

“Absolutely we’ve got the momentum now,” said Iain Klugman, CEO of Communitech. “We still have… a ton of midsize companies and probably about 500 startups in this year alone.”

Klugman is hopeful that the region can retain many of those who will be laid off by BlackBerry at other tech companies. Munro also suggested that those laid off might re- turn to either Laurier or UW to get advanced degrees. ‘That absorption [into the community] is going to take some time,” he said. “We have lots of talent, people will have to find a way.”

While BlackBerry finds its way, it is certainly not the end of Waterloo’s reputation as a tech hub. “We have this whole ecosystem of tech start-up,” said Taylor. “The companies that matter in the tech industry understand we are more than just BlackBerry.”