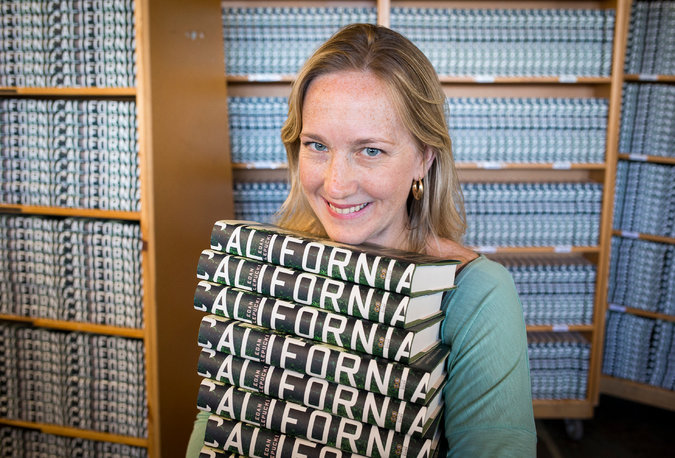 There’s something to be said about picking your battles, but when the right book by the right author comes along at the right time, that’s a trifecta of wonderful all around.

First, some background: currently, web behemoth Amazon is locked in a fight with Hachette Book Group, essentially over ebook royalties. It’s resulted in some bad blood, a lot of angry authors and some bad press for Amazon. Forgive the editorializing, but in this match Amazon has much, much more weaponry at its disposal, so this is hardly a fair fight.

The story has been in the book trade for weeks, but exploded thanks to a recent appearance by Hachette author Sherman Alexie on The Colbert Report, in which he highlighted Edan Lupecki’s first novel California, as a book that would typically get hurt in the spat as a result of being unavailable on Amazon, which it largely was during it’s prepublicaion period.

Granted, the novel got a huge sales bump as a result of the publicity.

California by Edan Lepucki is a rock solid first novel in which the wheels fall off in a near future setting outside of L.A, after an undefined series of cataclysmic events. Some climatic, some economic perhaps, but the upshot is many are dead, most are homeless and those lucky enough to be able to live off the land and stay alive are now fashioning a marginal existence after the apocalypse.

There’s no commercial sector, no internet and no real social structure. But all of this came about fast, and spread nationwide, so those that are left have their memories, and a clear picture of a tough time beforehand, but one in which they lived for the day, but planned for the future, as we do.

Cal and Frida are knitting a life together on the run from many unknowns and come to a small settlement a few hours north of their former home. There they find a group of people looking to replicate a government and a life, and protect themselves from any number of real or imagined threats.

The linchpin in California comes about when Frida learns that she is pregnant, and suddenly there’s much more to live for.

California works simply because the unknowns and the familiar are in constant flux, both presently — but also in the future and past.

This is smart Dystopian stuff — think of the Hunger Games for adults.