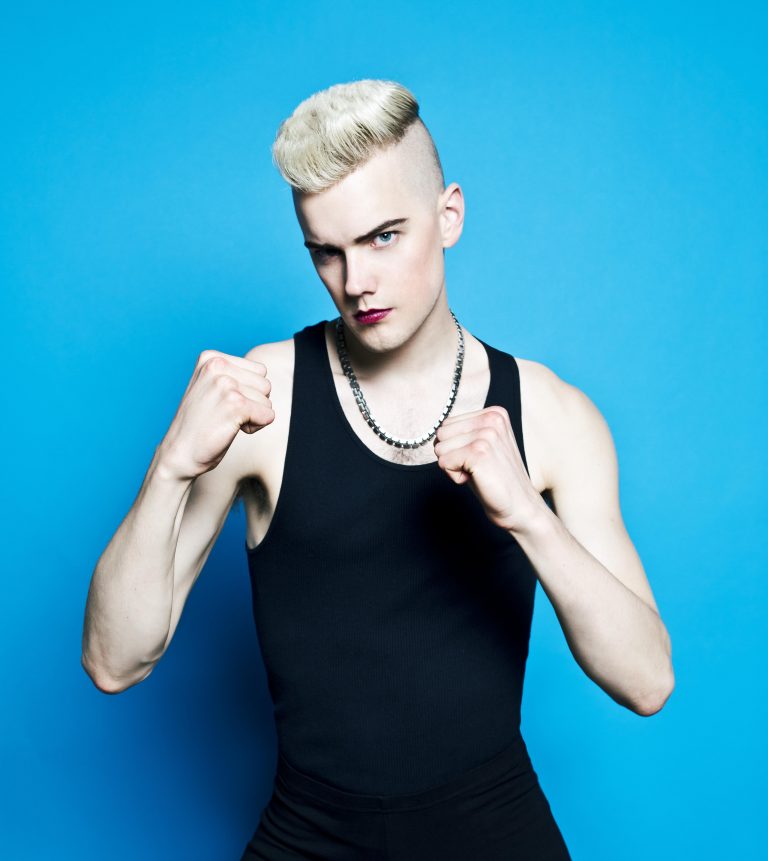 It’s extremely difficult to slot Diamond Rings into a musical box. He calls himself a pop star, yet on his new album, Free Dimensional, he raps and plays electric guitar.

His fashion sense mixes glam with the jerseys and ball caps of the Toronto sports teams he grew up idolizing. He cut his teeth with indie rock band The D’Ubervilles but now draws comparisons to David Bowie.

If you ask Diamond Rings – real name John O’Regan — the answer to who he is and what he’s about, it’s simple. “It’s about creating my own world and inviting everyone else to share it with me for a moment in time.”

The 27-year-old musician has been creating his own moments since releasing the first Diamond Rings singles in 2009. Since then he’s drawn attention from the likes of Pitchfork and Exclaim and recently appeared as the musical guest on Late Night with David Letterman. “You work up to these things,” notes O’Regan. “[But] I’m not going to lie, it’s not often you’re tuning your guitar and David Letterman is standing 10 ft. to your left.”

The Letterman gig, and everything that has come since, is something O’Regan has been working towards his entire musical career. “Everything that I’ve done as a musician and an artist, right down to playing coffee shops in the suburbs when I was 18 has all gone into making me who I am now.”

Diamond Rings has always had a lot of fun playing with people’s expectations when it comes to his music. Free Dimensional, the artist’s sophomore full-length album, is almost a contradiction in terms. While definitely a pop album, the lyrics continue his complex exploration of identity that he started in 2009.

On the lead single from Free Dimensional, “I’m Just Me,” he sings, “I was too afraid to love, afraid of my body or anybody thinking of what I thought of. Now I’m growing older I’m getting bolder, confident in my own skin.” It’s a bold declaration of growing into oneself, which in many ways reflects his own time evolving his act.

“At the outset it was doing whatever I could do to be as radically different and to defy expectations as possible,” O’Regan says. ‘Once it became clear Diamond Rings was going to become a going concern and something I was going to be doing as a career I really started to want to find ways to streamline the look to match the sound.”

O’Regan’s sound and style have garnered him a great deal of attention. Both could be called genre-bending and even in their creation the two mirror one another. “I record and write in my room or in the tour van. It’s where a lot of our ideas and contests are generated.” His style is a mix of DIY, created with the help of his cousin, Lisa Howard — “the glasses I wear on the album cover Lisa put together with black frames and pieces of mirror ball we picked up in Chinatown [Toronto]” — and high-end designers like the ones who create his signature leather jackets. It’s an attitude that has carried forward from O’Regan’s early days in Toronto’s music scene. “I was fortunate early on that I had a lot of help within my own community — those early videos didn’t make themselves!” Most of his crew came for free. “All those people contributed to a lot of that early work and did it for nothing other than the satisfaction of being part of something that was unique and fun and exciting.”

Now that fame and opportunity are knocking at O’Regan’s door, he’s become careful in monitoring how his work is presented. “Options aren’t necessarily a good thing. I think a lot of fantastic and amazing art work is born out of necessity and options can perhaps be one of the worst things for an artist.”

Control is therefore paramount in his career path going forward. “Now for me it’s about being incredibly selective,” he says. “I don’t want to find myself in the scenario where I’m in a room with someone because someone else thought it would be a good idea because they had a hit song out last month.”

After touring for almost two years, O’Regan isn’t slowing down – literally or figuratively. He writes from wherever he finds himself — “Trains I find especially nice” — as he keeps searching for new ways to express his musical identity.

There’s no downtime or breaks while he recharges his creative batteries. “Sometimes that’s a bit exhausting,” he laughs, “but nowhere near as exhausting as staring out the window.”