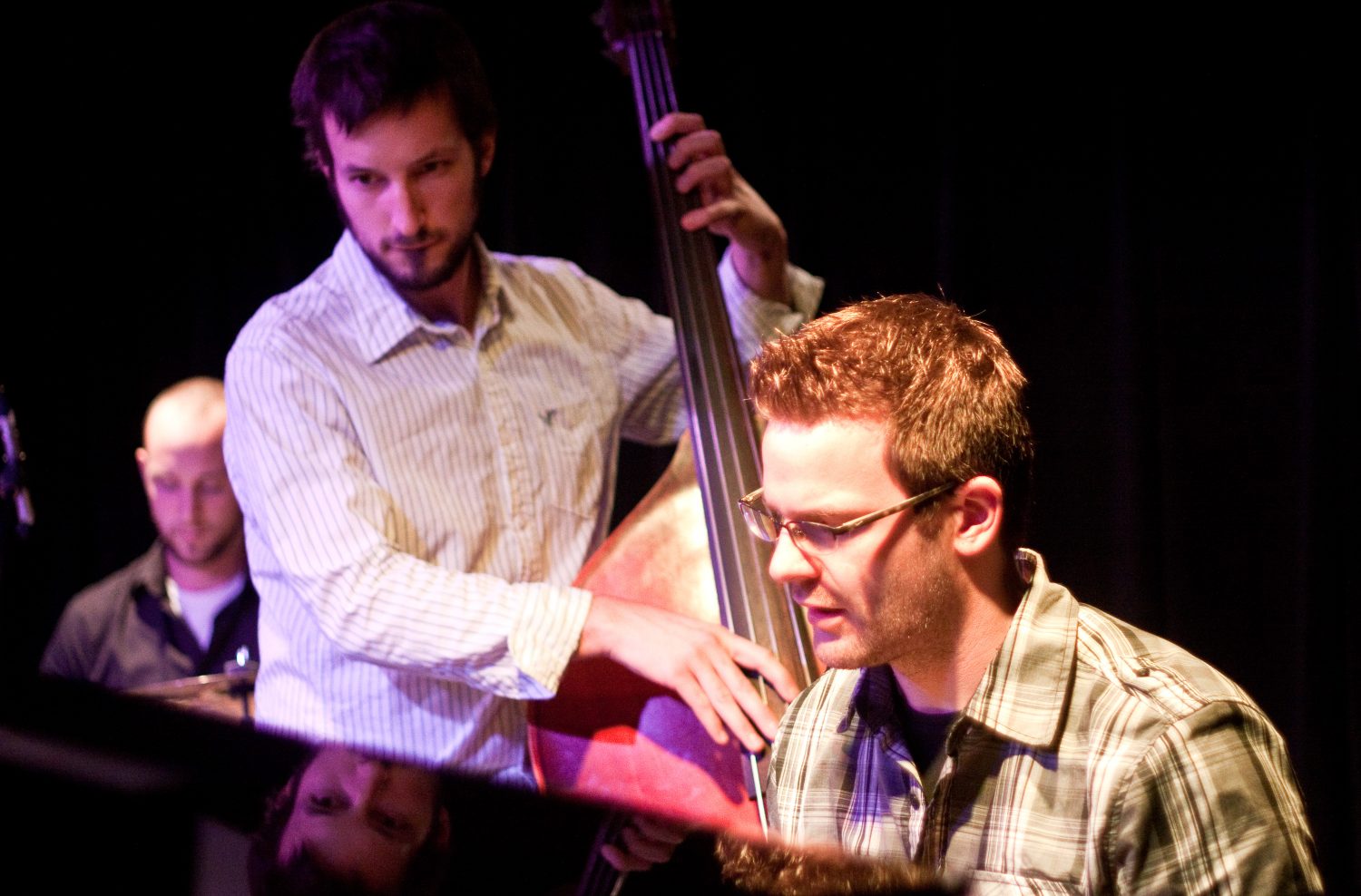 Three of a kind

Last month, the Jason White Trio led a packed Jazz Room, located in Uptown Waterloo in the Huether Hotel, on a journey through experimental music, re-arranged classic jazz pieces and some Nietzsche. Playing three one-hour sets, each had a different theme that exposed the attentive audience to a diversity of jazz-influenced music.

“Whatever show I play, whoever’s in the audience, there’s something for everyone,” explained Jason White, front man and piano player of the trio. White does the arranging and writing of all the music. Accompanying him are Montreal-based Paul van Dyk on bass and Joe Ryan on drums.

The trio all have a strong background in jazz but “we happen to be jazz musicians who play other stuff,” White said.

“We’re pretty much thoroughly based [in Waterloo],” White explained. “Gigs in Toronto aren’t generally all that attractive [and] audiences aren’t necessarily that appreciative.” As compared to Toronto where, White explains, “half the audience is listening and half the audience is chatting away,” the Jazz Room hosted an attentive and respectful audience throughout all three sets.

“We can break the silence and its this big moment where everybody is going on this journey together,” White added.

A mixture of all walks of life, the Jazz Room accommodated individuals and large groups for the event. Children, students, established professionals and an older crowd all gathered to support this local artist.

White later explained that “we set an attendance record at the Jazz Room for the third set.” An accomplishment White was both slightly surprised and pleased with. “We had the busiest night of the season,” he said.

Baffling pieces such as “Usher David Lam was a no show” with actor Andy Houston speaking the aforementioned title had the audience confused more than anything. Using altering emphasis on the phrase, it explored the importance of emphasis on meaning in conversation.

Other experimental pieces included the premiere of the “intergalactic” tune “Tyson.” Using pre-recordings of a Mike Tyson interview and live improvisation from all members of the trio they captivated the room with their fearlessness to experiment with sound and technology. A beautiful, minimalist piece, “Opening” from Philip Glass’s Glassworks was both emotional and beloved by the audience.

During the final set, White applauded the audience for their attentive ears and open minds: “Five years ago I would have thought that banging my fist on the piano would have gotten crickets. Thank you everyone.”

After staggering applause, the trio created an impromptu encore with Motown improvisation and cover of the Isley Brothers. As each musician in the trio jammed out in a solo, the others were supportive and complementary, really showcasing the positive chemistry this group has.White explores the limits of creativity in music by posing the question “How outside the box are you allowed to think?” He draws innovation from other musicians and how they are pushing boundaries. “Seeing a person light a saxophone on fire kind of makes me pounding my fists on the piano seem very palatable,” said White.

An influential member of the community, and graduate of Wilfrid Laurier University, White explained the merits of being involved with the Kitchener-Waterloo region.

“When you’re in a place like Waterloo, you can incubate and really grow as an artist. But then when you go from that into a really large pond, there are opportunities that don’t exist here, like meeting an agent,” he said.

The trio are exploring opportunities that go beyond the boundaries of Southern Ontario. “Once we’re finished an actual studio album, it would be really nice to be able to tour with that album,” White said.