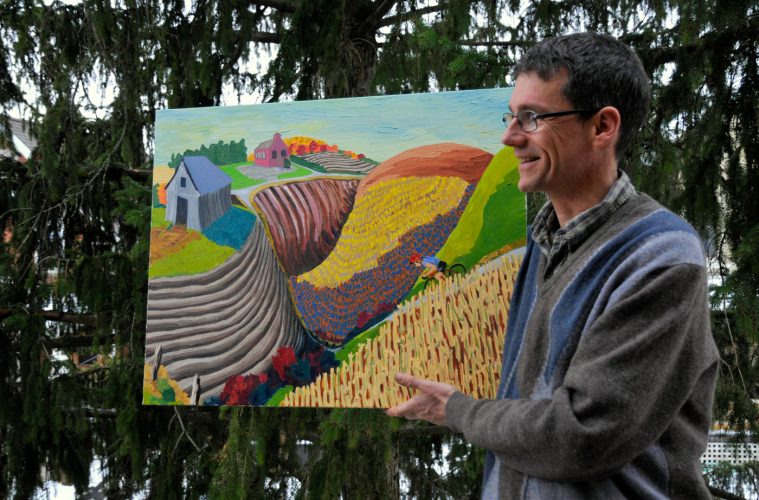 Artin’ Around K-Town with Terry Walters

Terry Walters will tell you he’s not great with words. He’ll also tell you he’s not an artist. Read past his humility, however, and you’ll discover that Walters has mastered the art of living out his words and creating from the heart.

A self-taught painter, Walters’s works are dynamic and imaginative, yet somehow still uncomplicated. He enthusiastically tells his story by pulling out the paintings that best explain it, paintings with the same captivating impressionism of Monet’s haystacks or the Group of Seven’s wilderness scenes.

“Van Gogh is so exciting to me,” he says, “just bursting with emotion. In the visual arts field, people are constantly pressing the boundaries and making you question everything, which is cool, I like that too. But I’m looking for something less intellectual, more direct.”

It’s not just his art that has a directness about it. Without a cell phone or social media, Walters manages to avoid many of the distractions of 21st-century life. In his words, “there’s something about moving through the world and paying attention to the world that to me is satisfying. In my subtle, quiet way, I promote that idea of being satisfied with less.”

This philosophy has allowed Walters’s life to take place deeply within his surroundings. Walters and his wife have lived in Kitchener for a few decades, and you may very well run into them at the Globe Studios, City Cafe Bakery, Recycle Cycles, or at the library.

“There are days when I walk around and think ‘this is a cool city.’ Maybe it’s happened that way for us because we’re old-fashioned, but we run into people walking on the street or at the coffee shop. It’s by being in proximity and by being open.”

The Waterloo Region also inspires his art, featuring scenes of Victoria Park or pathways along the Grand River. As he sees it, “if you’re biking to Tai Chi class and it’s sunset and you look down the railroad tracks to the old tire factory and the light’s like, ‘Whoa. Somebody has to paint this.’”

Though the city is his home, Walters finds himself especially devoted to the lakes, parks, and pathways of Ontario. Many of these scenes are inspired by indigenous artists, like Norval Morrisseau or the Huichol yarn painters of Mexico.

For Walters, there’s a deep spiritual connection in these places. “I’m not really a religious person, but you walk on the beach at night and you just feel a certain magic. It’s like my church, Lake Superior.”

This spiritual connection gets recreated on the canvas itself. “You could put this on the Internet, reproduce it all over the place, but somehow it’s not the same as sitting in front of it. I want you to feel the brush strokes; the light bounces off of them. Or maybe it’s magic, I don’t know,” he explains.

Seeing the art in person, he believes, allows us to access this magic. Though he is supportive of local artists, and has filled the walls of his home with his favourite pieces, selling his own art never felt right.

“I did do a couple of shows. I dabbled in the idea but it felt like ‘forget it.’ Art is my therapy, or in the words of The Talking Heads’s song, art is ‘cleaning the brain.’ If I don’t paint for a long time, I don’t feel the colours the same way.”

In recent years, touches with grief have immersed Walters once again in his art. “For 10 years we had our daughter with us. We lost her two and a half years ago and suddenly, very suddenly, we’re not parents anymore.” He adds, “I’m trying to figure out where to go from here. So I thought, painting’s always good for me, I’ll go back to painting.”

As an artist embedded in his community, with a home studio room full of canvases, Walters has started giving away some of his work.

“There are a lot of waiting rooms at cancer clinics, for example, that need some real artwork, instead of some banal print or bad photograph. I gotta get around town a little more and match paintings with spaces.”

If you’d like to get in touch with Terry Walters, or to see more of his artwork, visit his blog at www.moomooart.wordpress.com. Or, just wait to meet him and see his art in person; you never know where he might turn up.