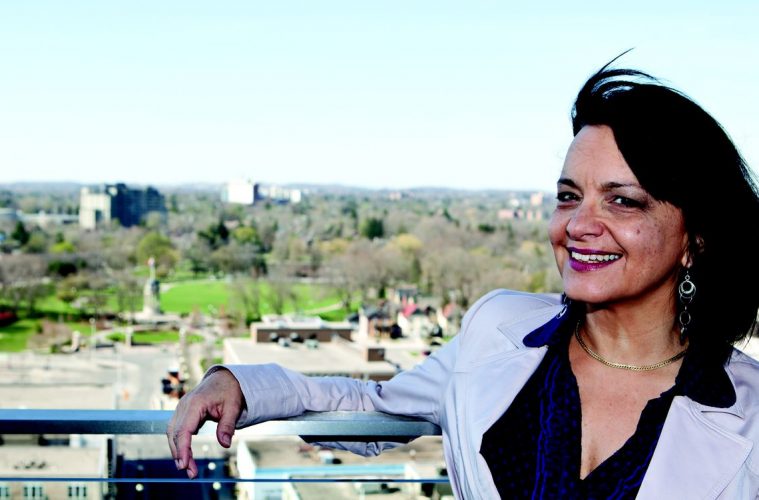 Art of the city

Silvia DiDonato on top of Kitchener City Hall, where she works developing arts and culture in the area. • NICK LACHANCE CCE CONTRIBUTOR

The beginning of Silvia DiDonato’s story is a common one in these parts: she came to KW to attend the University of Waterloo, fell in love with the area and never left. How her story unfolds after that, however, is anything but common.

Since 2004, DiDonato has worked for the City of Kitchener in downtown and business development. But it is her recent promotion to arts and culture manager that put her squarely on the radar of the artistic/creative and business communities. I asked her what these communities have in common.

“Business locates near talent,” she explained, “so my team’s goal is to make the community a place where talent wants to live, work and play — to build a community that people want to be a part of.”

What kind of talent, I wondered.

“When we look at business clusters, the content creators keep floating to the top of what we need as a vibrant community. We have the technological, digital, financial and multimedia clusters fairly well established,” she said.

“This is a great framework, but we need to develop an environment that attracts and retains the content creators — animators, visual artists, user experience experts, story tellers, narrators, musicians and film scorers.”

DiDonato sees a direct link between creativity, innovation and business success. The City of Kitchener does as well — her Arts and Culture Department are a key component of the city’s Economic Development Department. The marriage of culture and commerce is a great idea, but I remained skeptical that a city department could create a vibrant cultural scene or community.

DiDonato addressed my concern. “You are correct, the city cannot ‘build’ a community, but we can create the environment for that community to take hold, flourish and succeed.”

Nowhere has this philosophy of creating an environment for success been more apparent than in DiDonato’s latest endeavor, the Music Works project. Although DiDonato is the driving force behind this, she modestly calls herself just a “facilitator.”

According to DiDonato, the Music Works project is a “community consultation process to facilitate and accelerate what the creative community decides is important.”

It was developed using extensive research into cities with rich cultural scenes like Austin and New Orleans. Launched less than a year ago, this process has already yielded impressive results.

The City of Kitchener spring update outlines ten initiatives generated and being championed by the local creative class, including the upcoming Koi Music Industry Conference on May 11 (koimusicfestival.com), a musician’s resource center and a K-W online music channel.

When asked what drives her to invest her time, energy and passion into building the local arts and culture scene, DiDonato let her guard down.

“Well, it is certainly good for business and economic growth but it will also make this an even cooler place to live.” That’s when I realized Silvia DiDonato is more than a manager and facilitator – she is also a fan.