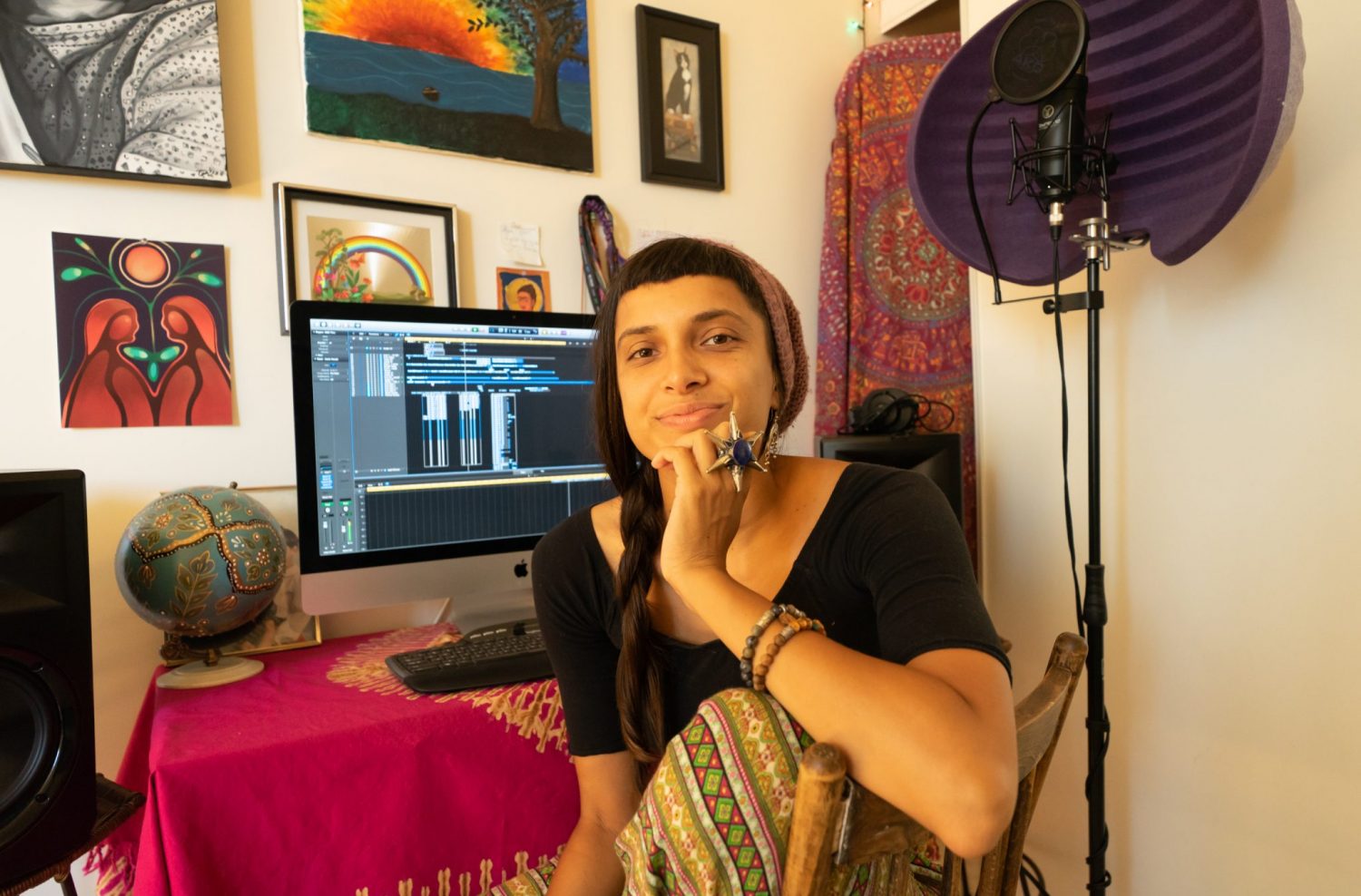 Alysha Brilla, a local Indian-Tanzanian Canadian artist, music producer and activist, felt the musical pull to perform at a young age. She’s been enthralled with making music for as long as she can remember.

“My dad had brought this guitar back from Tanzania. He had immigrated here from there, and he and my uncle, who was a white Canadian man on my mom’s side, they would jam. And I was three years old. I couldn’t even hold a guitar, it was too heavy, but I knew that’s what I wanted to do,” Brilla said.

Since then, Brilla started writing and performing songs for her family on an electric keyboard gifted to her by her grandma, eliciting help from her sisters to sing the harmonies. At age 15 she learnt how to play guitar, and by age 19 her rootsy, global lyrical songs had been noticed by the music industry, signing on to a record label in the US.

Growing up in a mixed household with a Muslim Indo-Tanzanian father and a Christian European Settler- Canadian mother, Brilla credits her not easily categorizable musical style to being exposed to many different genres of music.

“I definitely love roots music, that’s sort of what I grew up in love with. I love Amy Winehouse as an artist — I have a painting of her in my studio. Her and Bob Marley are sort of my musical mom and dad if you will. That’s who I look up to and feel connected to musically,” Brilla said.

What people may not know is that Brilla’s writes, sings and produces all her own music herself, which she started doing at a young age, around seven years old, on a karaoke machine with two tape decks — laying down beats on the keyboard, adding a bassline and building up songs. She is still doing it today.

Identifying as a Queer, femme BIPOC artist, Brilla’s also been striving for more diversity and equity in the music industry, after experiencing her own traumatizing situation in the US.

“I went through the gamut of experiences in Hollywood. I couldn’t watch it because I thought it would be too triggering, but A Star Is Born with Lady Gaga … basically that story, that’s kind of what my experience was. And then you add on being obviously Brown or Half Indian …” Brilla said.

After being nominated for three Juno Awards in 2014, 2015 and 2017, Brilla noticed the overwhelming lack of female and BIPOC Juno nominees, and in 2017, along with prominent other Canadian female artists, Tegan & Sarah and Amy Millan, she spoke up about these issues, becoming an advocate for womxn in the industry.

Brilla continues to be an activist who infuses her music with politically inspiring messages and beats. She’s also been spending her time over the last few years helping artists and youth to find their own voice through mentorship.

“I’m so passionate about people self- producing new music — about womxn, especially, and non-binary people, having the capacity to have that creative outlet and express themselves in their truest ways.

Brilla, who travelled to Rishikesh, India to train as a yogi in 2014, believes that music has the power to heal. Songs like “Centre” which features Sridaya Srivatsan on Carnatic vocals (a South Indian form of classical singing) are meant to merge music and wellness as a form of healing and therapy for mental health. 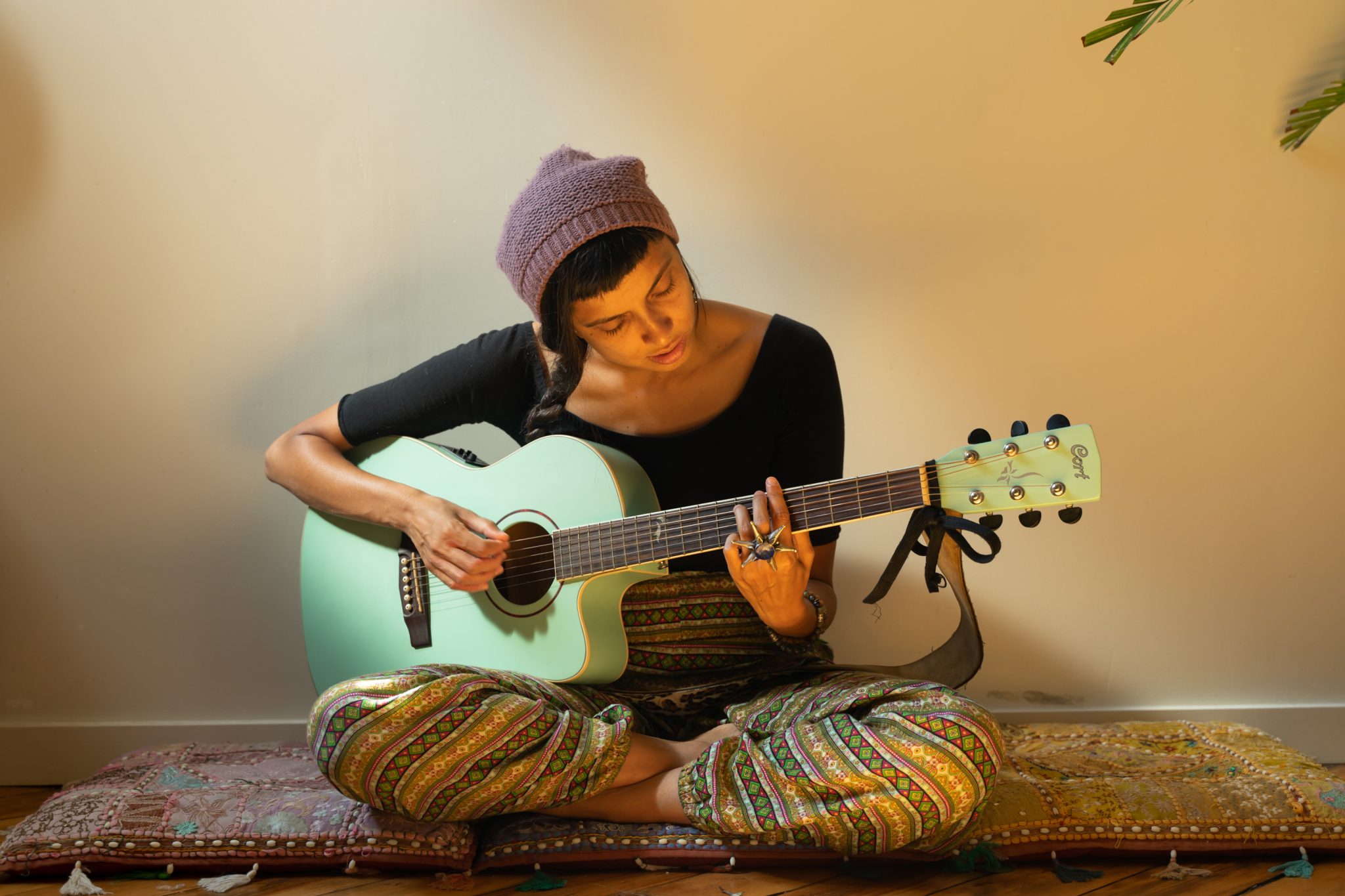 This month, Brilla is releasing a new single titled “Love.”

“It’s about universal love — the human condition. I wrote it about a feeling of losing someone, but
also coming to an acceptance and excitement that life doesn’t really end when life ends,” Brilla said.

She’ll also be officially launching her ‘Frequency Portal’ — a digital space where she will share her creation process — with workshops and classes on music production, songwriting, singing and audio-mixing, as well as sound healing, self-care and wellness. The portal will look at both the spiritual and the technical side of music to create healing.

Brilla credits local KW musical mentors, like Blues singer Miss Angel, for helping her get started in the industry as a youth, and wants to be able to provide the same opportunities for others.

This year has been a departure from Brilla’s life as a busy artist as it has been for many in the industry. With her shows cancelled for 2020, and life slowing down, she says she misses playing live music, but for the past five months, she’s been able to spend her time either outside connecting to nature or inside her home-studio focusing on audio production. Her favourite place to find peace in nature locally is anywhere along the Grand River.

“… that’s, what’s kept me here … I really go there quite often. It’s such a beautiful river, and I wish people would go visit it more. 25 per cent of our drinking water comes from it, and it’s definitely a life-giving source, and I feel really lucky that we have that,” Brilla said.

Brilla’s new song “Love” will be out later this month. She is also performing at an outdoor, distanced acoustic show Oct. 3, with an ambient ensemble at a farm in KW. To learn more about production, and to “share the deep creation process” with Brilla, join her Frequency Portal by visiting her website.