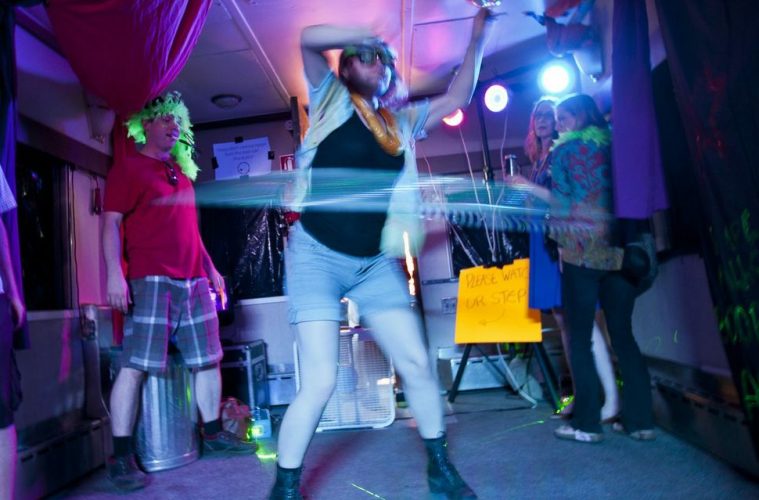 How the Cord Community Edition organized a massive, moving train party and lived to tell the tale

It’s about 10 p.m. on June 21st and I’m surrounded by people singing Journey songs on a moving train somewhere between St. Jacobs and Waterloo. I’ve had less than eight hours sleep in the last 48 hours, and somehow, I have completely forgotten to eat a thing even though I managed to grab a few extra beers in between running up and down the train innumerable times. I’m looking desperately for all of my “security” people – no one knows in about five minutes, they all have to jump off the train – and can’t find three of them.

“How did I get here?” I asked myself. It’s a question I’ve asked myself many times since, just three months ago, Wilfrid Laurier University Student Publications formally took over the planning of Steel Rails. Of course, I had heard of Steel Rails. An epic party on a train where everything can and likely will happen. I was looking forward to going. But planning a party for almost 300 people is another thing altogether.

My first introduction to Steel Rails was through Hilary Abel. I met Hilary in a long series of what I can’t help but think of as “professional dates” — meetings with other professionals meant to strengthen community ties and figure out how they could work with the CCE. I can’t remember who approached who, but we finally met in December 2012. Hilary spent almost the whole meeting jotitng down notes of names of more people she wanted to connect me with — a born planner. But it was when Hilary casually mentioned that she was considering passing the Steel Rails event to someone else that I struggled to keep my eyebrows from shooting to the top of my forehead. The next day my publisher, Bryn Ossington, had the same reaction. For us — a brand new publication trying to engage with the community – this was an opportunity unlike any others. People would associate the CCE and WLUSP with an extraordinary event and, with any luck, stop confusing us with the student paper.

It would take some months of convincing our own organization it was the right move, and gaining the trust of Hilary and Paul McGough, her co-organizer, before the decision was made. But in late March we finally got the go ahead. To use a train pun, it was full steam ahead — and all of a sudden, what was just a really cool idea got very real.

Hilary told Bryn and I early in the process that things would go wrong and it was ok, because no one who ever got on the train would know how it originally was supposed to be. I would repeat that advice over and over as we got closer to June 21st. Truth be told, the Steel Rails that guests got on was very different than the one we planned. Some things — like the idea of building a giant Community-esque pillow fort in the shop — were killed early just because of cost and scale. We had interested artists circle the project and decide they didn’t want to do it. We had one confirmed performer drop out at the last minute due to an accident (we won’t tell you who because you might end up seeing them next year).

But it came together, largely in part to the absolutely awe inspiring effort of the artists and volunteers who worked on putting the event together. It never ceases to amaze me the lengths people will go to when you simply ask for their help.

Charlotte Armstrong — who was on the train with the Nerd Nite KW crew — came through for us multiple times, providing electronic equipment, actors and often a much needed moral boost. KDUB.ca’s Dan Lauckner only had to hear the words “party on a train” and was 100 per cent in. In fact, he’s already started brainstorming ideas for the next train. The entire staff of the Waterloo Central Railway, who catered to every crazy whim we had (“People are going to get pulled off the train in the middle of no where? Sure!”), were amazing. And of course Hilary and Paul, who were full of ideas and did a lot of much needed hand holding when things did go pear shaped.

One of the reasons Bryn and I knew WLUSP could take on this event was because we have some of the most kick ass volunteers to ever give up their precious time. Every single department — The Cord, Radio Laurier, Blueprint, and more — helped with everything from advertising, to set up to the incredibly thankless task of cleaning up the train (don’t worry we will be thanking them with a party of their own soon).
And then there was WLUSP’s leadership, who approved taking over Steel Rails as one of their very first acts as a board and then did everything from work the door to being our transportation for the night. That amount of faith in an event is very humbling.

So it was with this show of awesomeness behind us that we opened the gates to the first ever WLUSP-run Steel Rail Sessions. As people kept getting on the train, I was indeed asking myself “how did I get here?” But it was more from the shock that this was actually all happening.

I worried about things going wrong, but as the train was moving and people started enjoying snow cones and food, it was clear I didn’t need to worry that much. I even managed to take a little time to enjoy some of the acts.

Until of course, something went wrong.

It’s about 10:45 p.m. now and I’m standing with Conductor Ross as the train slows in Waterloo Park. “Two cars to go,” he radios the driver. I’m counting four security guards – I need seven. “One car to go,” says Ross. The train is getting slower. And all of a sudden – there they are! I am all relief in this moment.
On cue, all seven pile out of the train and run off with their flashlights. I’m now waiting for the big finish — one of the largest you can buy — to go off in front of me. That’s when I hear a bang behind me and I, along with everyone else, run to the otherside of the train. The firework got set up on the wrong side of the train— but like Hilary said, no one knows that. Around me people “ooh” and “ahh” and I get caught in a moment even I wasn’t expecting.

See you next year.