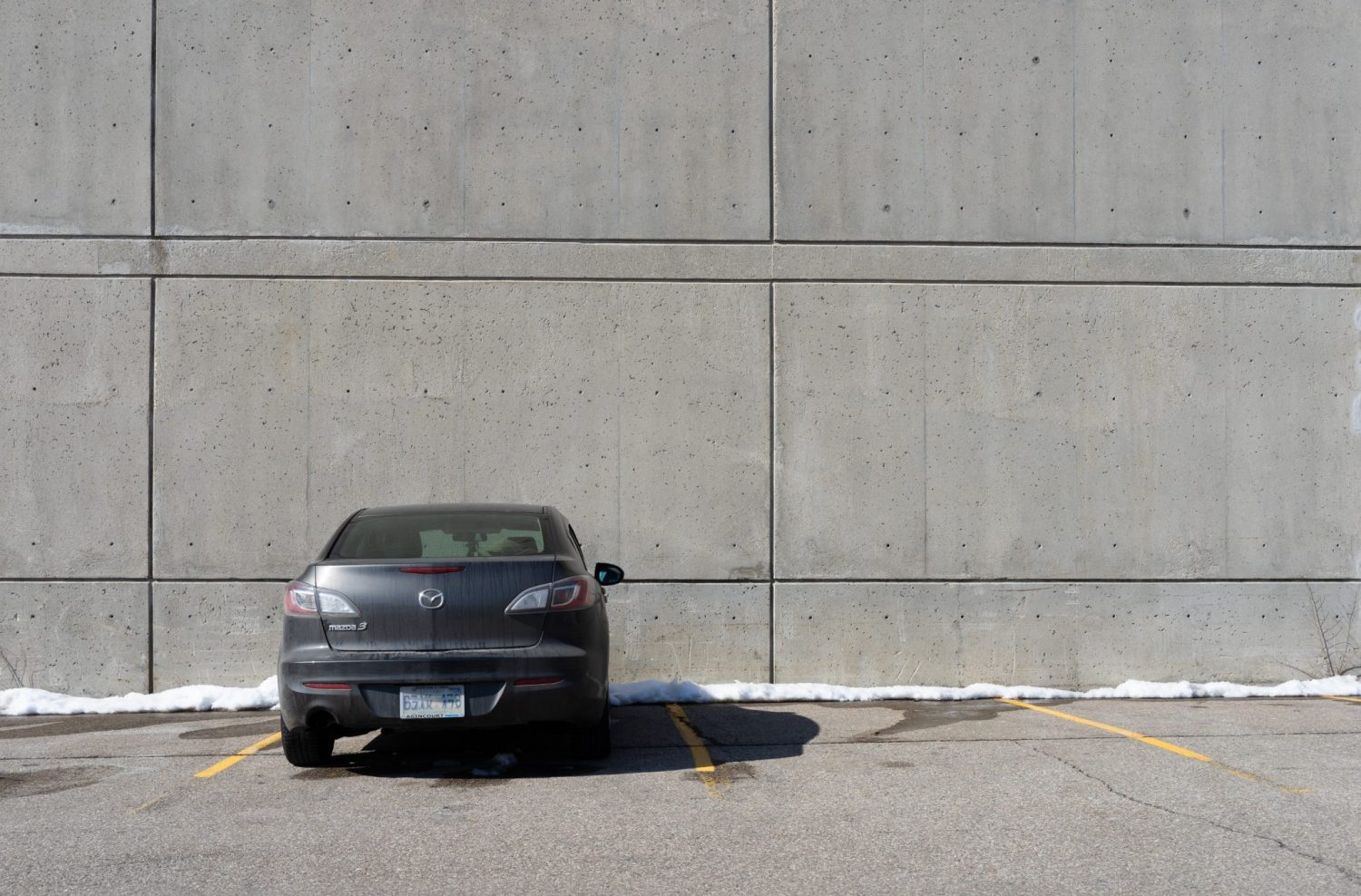 You may have wondered why they’re sitting empty while you roll (or god-forbid, walk) past these brutal slush-swept concrete savannas on your way back to the one-bedroom place you share with four other people.

Indistinguishably useless — they’re grim reminders of our post-industrial collapse — to be sold off and transformed into housing as fast as possible. After all, they’re in prime locations near amenities like shopping and the LRT.

Outside of often gutless zoning, we have little control over what happens to them. But many, like the strand of asphalt running along Caroline across from Waterloo Town Square or the parking across from the Tannery, are owned and controlled by municipalities. In other words, us — tax-paying citizens.

If sold-off, they’re gone forever, and what is built there will define a neighbourhood for generations. Why not use them to collectively imagine a vision where all voices are at the table, where families can live affordably and seniors can be safe from falls and cars. If it has a social value, these are the most efficient places to realize it. They’re blank canvases where we can apply a collective vision for the community we want.

Global trends out of our control (population growth, the information economy and climate change) are flowing people and capital from all over the world into Waterloo Region in search of opportunity.

Housing experts from the University of Waterloo, Martine August and Nick Revington follow these flows carefully. Their warning: housing development is increasingly at the mercy of a financialized global real estate market treating our basic human rights as commodities.

Author Matt Taibbi artfully calls this system “a great vampire squid wrapped around the face of humanity, relentlessly jamming its blood funnel into anything that smells like money.” The moment our taxpayer-funded LRT intersected with explosive population-growth projections, developer algorithms in far away anonymized real estate investment trusts (REITs) started sniffing out Waterloo as a place to make a buck.

Thanks to a neoliberal fetish for austerity, there is an eagerness to sell public lots to REITs while demand is hot. This balances budgets, pays for needed services and wins elections.

Housing costs are still skyrocketing. The vampire squid hit Toronto first. According to economist Mike Moffatt, “over the past 13 years, Toronto and Peel have lost, on net, nearly 500,000 residents who have moved to other parts of Ontario.” As the fastest growing place in Canada, we can safely assume many of these folks are moving here for more affordable living.

It’s possible in the medium-term if we build enough housing, prices will stabilize. But what about all of the people who need a place to live right now, or a century from now?

Public surface parking lots have stupidity built into their DNA. Knock something down, put up a gate, add a ticket robot, then double-tap taxpayers for the right to store their car in the least-efficient manner possible. What sense does it make to inefficiently store people the same way?

It’s our duty to resist the vampire squid and seize the vanishing opportunity to transform our publicly-owned assets into durable spaces while we still have control.

Some local developers truly care about the community. But their money doesn’t have neighbours other than a hungry balance sheet stored in some server farm in the desert. That balance sheet craves single bedroom units.

Those most under the spell of the vampire squid are the start-up community we rely on to generate jobs and development here. Shout-out to them, they’re experts in UX and AI and have a big role to play in our housing crisis. But most are too preoccupied with growing a business or intellectually out-matched to deal with inherently unquantifiable social issues like housing.

Waterloo Region has a leading School of Planning advocating for multi-bedroom rental units, and an Architecture school working on universally-accessible designs. We have artists advocating for beauty, social workers demanding affordability, climate change experts projecting problems in terms of centuries, and community builders trying to bring everyone together.

Giving in to simplified solutions means we’ll have to spend more time and energy fighting a more powerful vampire squid down the line. Let’s make a stand in our public parking lots — especially when the final boss awaits us (bye NIMBYs!).

And lastly, all land in Canada is unceded land taken from Indigenous people through genocide, betrayal and forced cultural assimilation.

The opinion section is a platform for community writers to share their views. Pieces do not necessarily reflect the views of the paper. Want to contribute? Contact info@communityedition.ca