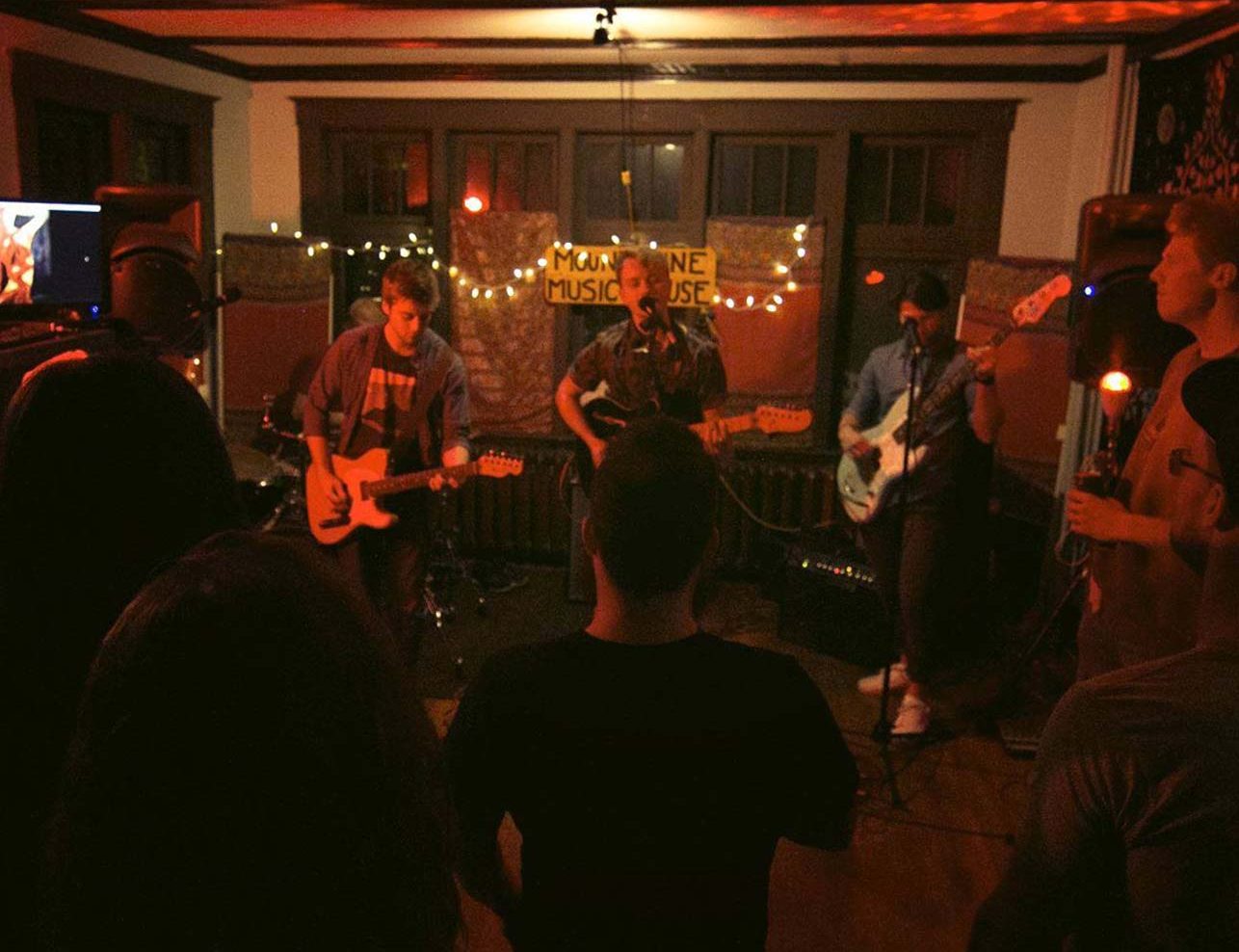 A Live Show in a Living Room

It’s a brutally humid Monday in July. Roommates Mike Sharp and Jacob Dickie are sweating it out in the dining room of one of the Region’s emerging clandestine music venue — the Mountanne Music House.

If the venue looks like your bog-standard student home — dishes piled up in the sink, a keg fridge, Value Village-grade art on the walls — it’s because it is. Dickie and Sharp are two members of a shifting cast of musician housemates (and Heidi the dog). They invite anywhere up to 50 relative strangers into their living room on a semi-regular basis to rock out, and in turn, be rocked by some of Ontario’s most exciting young bands.

“We always have lots of fun,” Dickie said.

Started in 2017, the pair are thrilled with their experiment so far. Word is getting out too. They’re getting requests from bands across Canada wanting to get in on the fun of playing there.

The shows are mostly promoted by word of mouth and Facebook. It’s BYOB and fans are encouraged to make a donation of $10 at each show.

“We [don’t refuse people] if they can’t pay. We want everyone who wants to watch a show be able to even if they can’t afford it,” Dickie said.

Whatever money is collected at the end of the night goes to the bands. The guys in the house don’t keep a dime.

“We’re not in this to make money,” Sharp said. “We want to build a community.”

Lovers Touch, Mauve Grove, Controversial Sharks and King’s Limit have all played the house multiple times and have helped grow the community through their fan bases and musical connections. Most have the same motivation. They want to put on a show for their fans in a casual friendly space where like-minded musicians can meet, perform, and support each other.

Dickie and Sharp met at a local music show and became friends. They soon rented a house on Mt. Anne Drive in Waterloo’s Sunnydale area and started hosting shows in the quiet residential neighbourhood.

“I don’t think there was a show at that house where the police didn’t come,” Sharp said.

While their former neighbours weren’t huge fans of the shows, the music community was. To avoid getting ratted-out and continue doing what they were doing, they moved to a century home in the outskirts of Mount Hope in Kitchener and began throwing shows again.

Somewhat vaguely named after its original location, the guys living in the Mountanne Music House are hesitant to share their address widely.

On any given night, they’re not sure who they’ll be opening their doors to. It might seem risky, but both guys clearly feel it’s their duty to offer space to musicians in an emerging music local scene looking for momentum.

Neither can remember any serious infraction by a guest that stands out.

“Not everyone who comes here believes in private property,” Sharp said. “But that hasn’t really been a major problem so far.”

They said someone once stole some beer from the fridge. There haven’t been any fights beyond a few heated political arguments.

“We haven’t had the police come yet,” Sharp said.

Their neighbours seem to like the shows. Not long after they moved in, their neighbours across the street started hosting trap parties. A collaboration between the two houses is in the works.

Their landlord is, “chill,” and according to them, would be more likely to attend a show than shut the place down.

Improbably, The Mountanne Music House seems to have all the right ingredients to pull off something inspirational — as long as nobody calls the cops.

“All we’re really hoping for is that we can keep this going,” Dickie said.