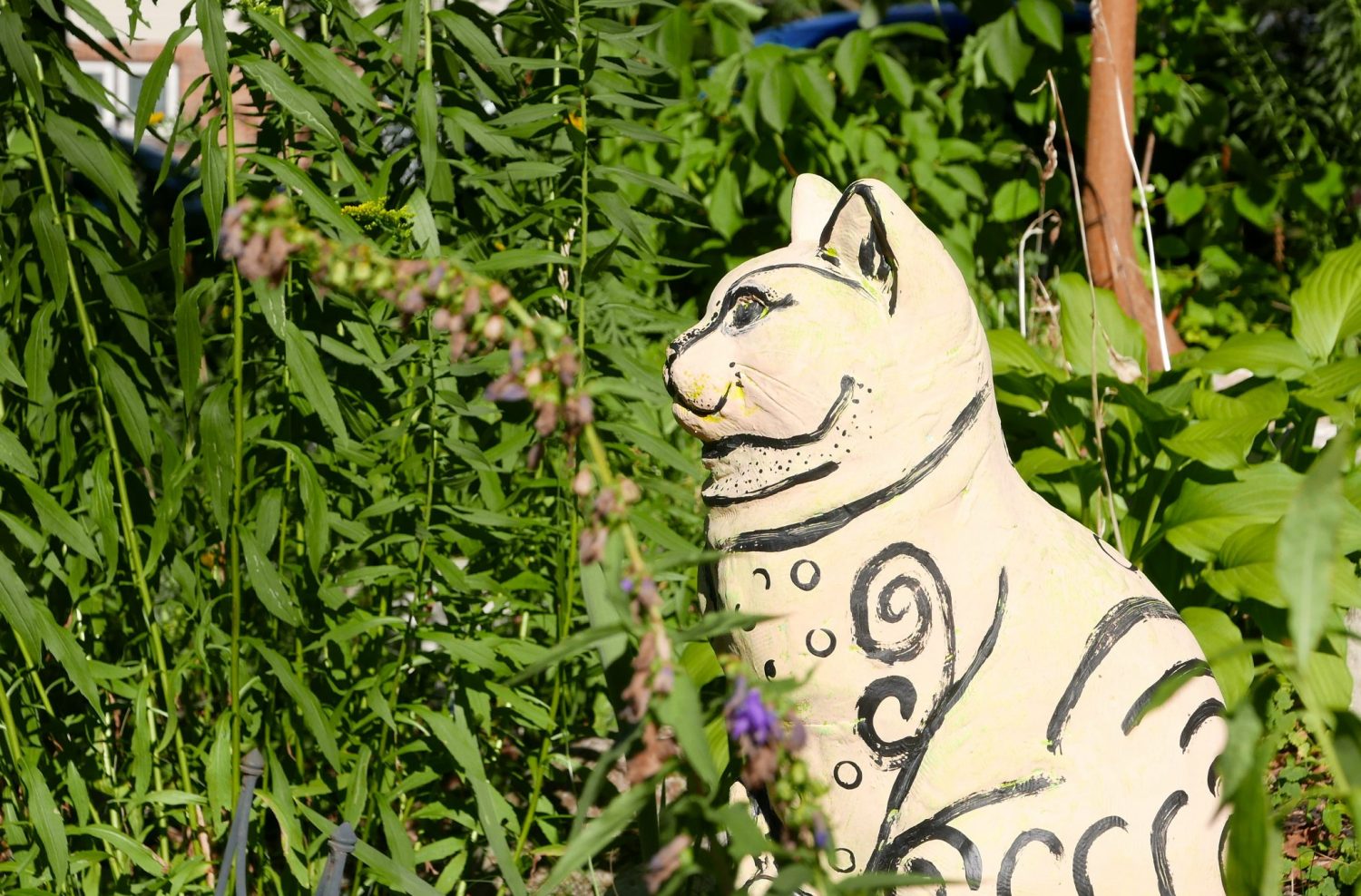 A Beautiful Day In The Neighbourhood : Cat Statue Has Locals Feline Great

“Did something happen to the cat?” he called to me.

“Oh, we don’t have a cat, sir!” I call back, as I check my mail, a welcome distraction from working from home.

The stranger in his late 80s looks like he’s been standing there for a few minutes. He gestures to my front yard garden, where I usually have a two- foot statue of a cat.

Years ago, in our first summer in this house, I was doing yard work and found a statue of a cat. I dug it up, scrubbed and washed it.

Eventually, I moved her into the front yard. Despite being three times the size of an ordinary cat, and made of grey plaster, we noticed neighbourhood dogs barking at her, kids pointing to her while they practiced making animal noises and adults bursting into laughter as they suddenly realized that she’s there.

Some even seemed to have a relationship with her, their eyes searching for her as they approach our garden.

At one point, and I can’t remember why, I decided to paint her. Over the years our cat statue has been repainted at least seven different bright and colourful patterns. Sometimes I do it myself and sometimes I include neighbourhood kids in the painting process. I like the idea of them walking by and remembering how they’d been trusted to take part.

Sure, like a lot of things in my downtown front yard, there is a chance that a bored pedestrian will scoop her up and take her home, but I like her here. Watching over the street like a real cat would.

Besides, while she’s fun to have, she has no actual value to me. If she were to disappear, there would be a pang of sadness, but then I probably wouldn’t think of her again.

“Oh, the cat statue?” I ask him. “She’s just fine! I have her in the backyard. Giving her a new coat of paint!”

“I repaint her every year or so,” I explain. “I started a new coat a few days ago, but got distracted, and you know, (mumble about life in a pandemic).” I punctuate it with a nervous laugh, even though he doesn’t make me feel nervous.

He nods with the patience of a dear friend listening to bad news but yearning to hear your happy ending.

I get the feeling that more needs to be said between myself and this stranger. “So, you’ve seen the cat statue before?” I offer him the space he needs to continue the conversation.

“I come to talk to her every single day. I’ve seen all the colourful paint.” he adds “She’s been missing for a few days and I was worried. I was worried that she’d been stolen or broken.”

I take a minute. My cat is someone’s friend.

“Not stolen sir, just having a spa day,” I say, with as much reassurance as the phrase can muster.

“I promise you, she’ll be back here waiting for your visit tomorrow.” And I set off to work to get her repainted.

With his one word ‘everyday,’ my cat statue has found her value — she’s found her friend.

He doesn’t need me to be his friend. I realize that he needs me to make sure that she doesn’t disappear on him first. 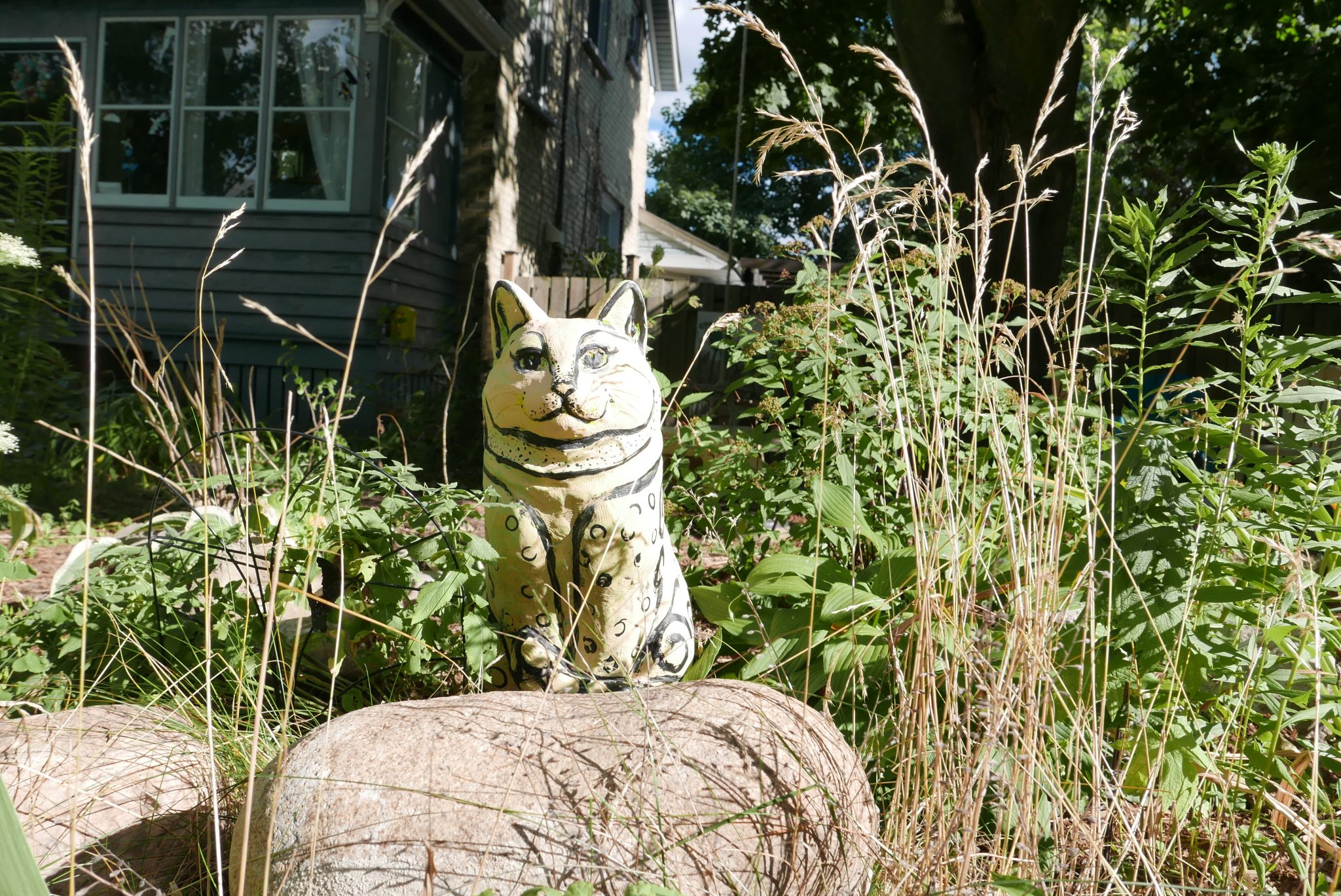 Laura McBride is a resident of downtown Kitchener, photographer and artist. She is a passionate community builder and one of the creative forces behind the Hohner Ave Porch Party and Central Fairies-Fairy Doors.