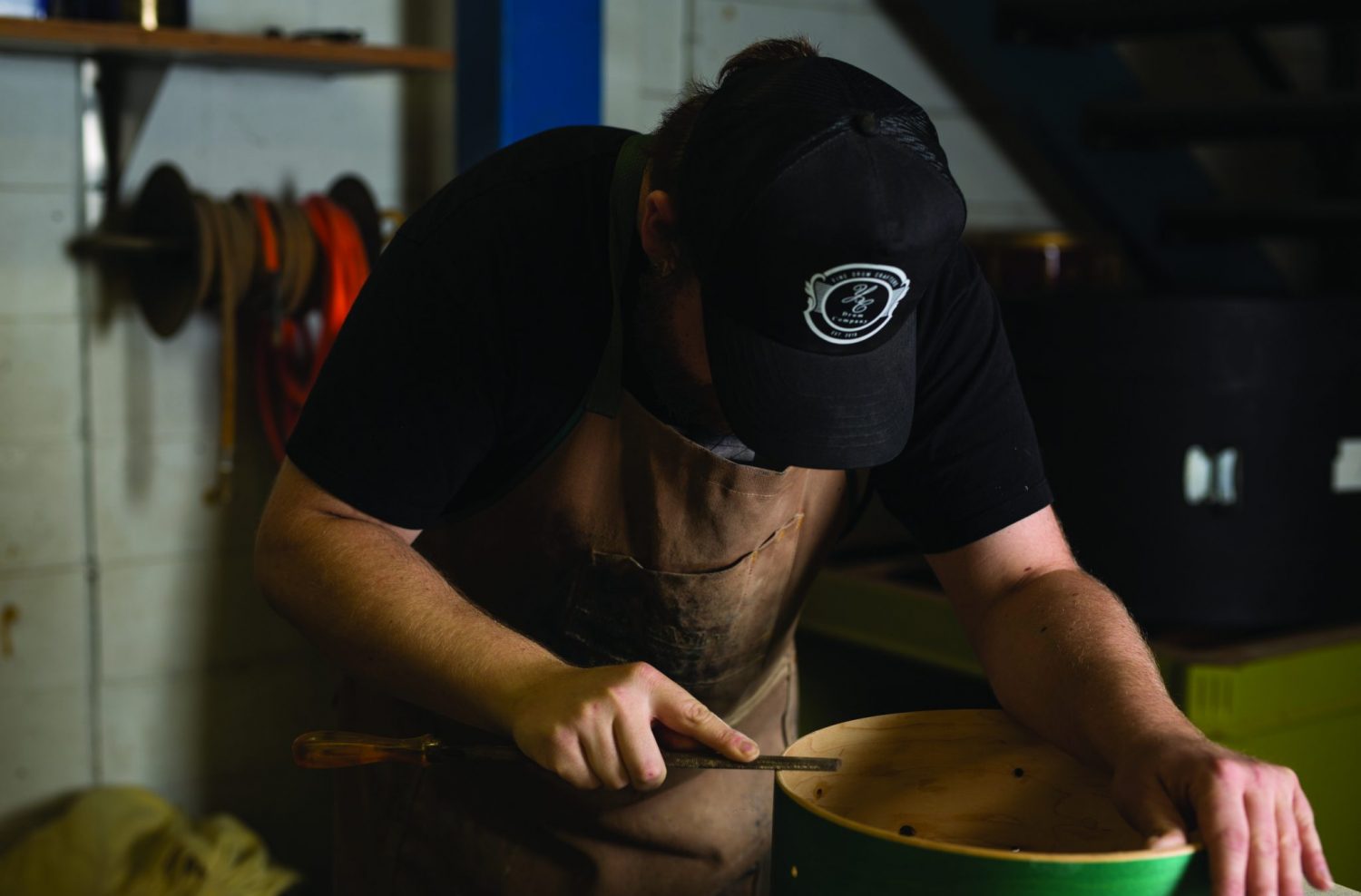 YC Drum Company Makes a lot of Noise in Waterloo 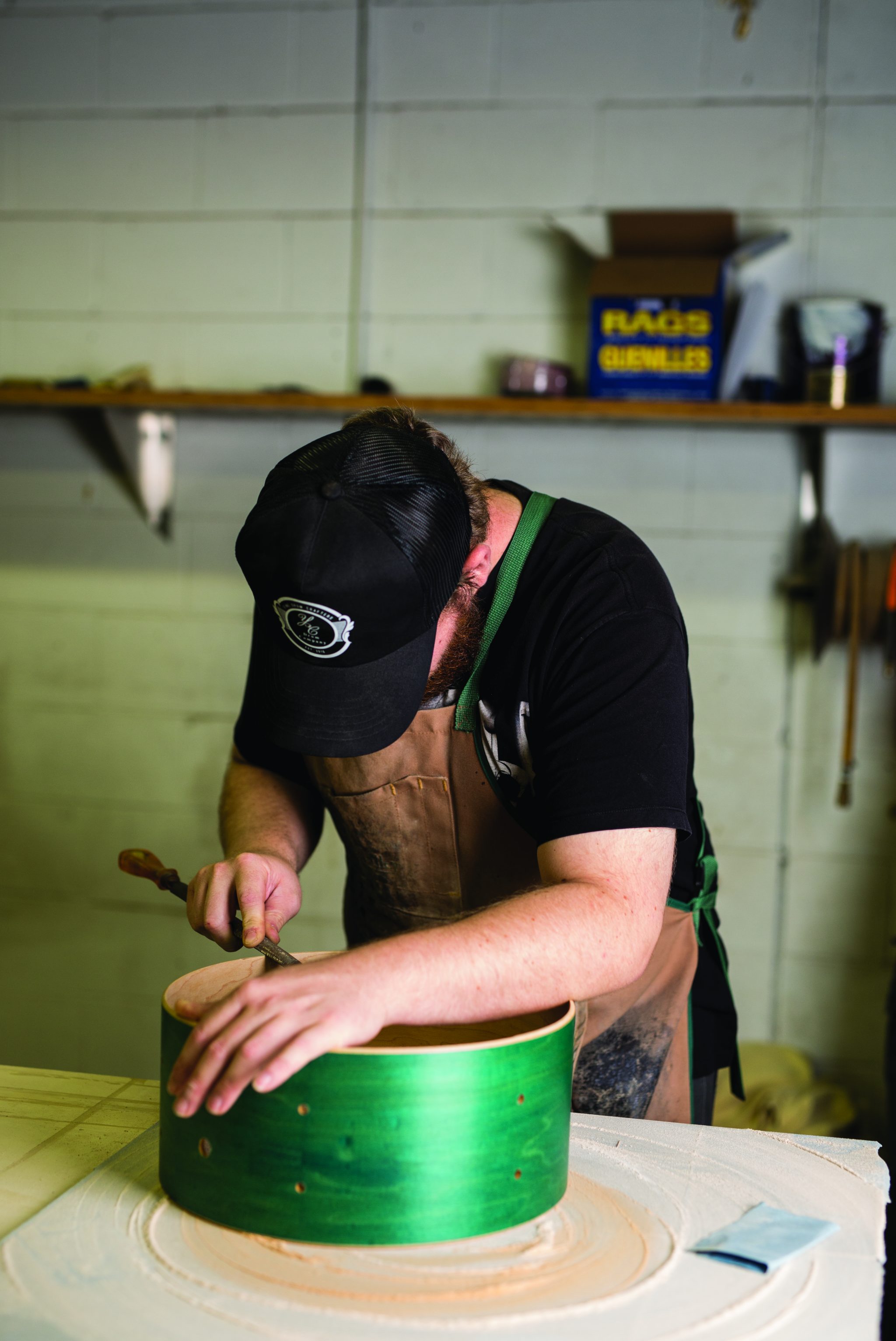 Jordan Gauthier, sole proprietor of YC Drum Company, believes there is a big difference between schooling and education.

“You can spend all this money and all these years and go to school, and get an education, or you can get out there and get your own education, and that’s what I’ve done,” Gauthier said.

Ever since he was a teenager, Gauthier has been building custom drums. Now at only age 24, his hobby has turned full career. His shop, YC Drum Company, is located in Waterloo, just off Northfield Drive. His clients have included drummers from bands such as July Talk, The Glorious Sons, The Strumbellas, The Dirty Nil, Pup, Seaway, Half Moon Run, Dear Rouge … and that’s just the short list.

Gauthier went to school for audio recording, but didn’t finish. He describes himself as not being overly academic. He wanted to immerse himself in the music industry, not sit in a classroom and learn about it.

When Gauthier was 19, word spread among local musicians that he owned a collection of vintage drum gear. Musicians would reach out and ask to rent his gear for studio sessions, so he began to exchange rentals for gas money and the opportunity to work gigs as a drum tech. This led to paid drum tech gigs, which eventually turned into a job building custom drums to order.

Gauthier himself, is a drummer, and would often skip high school to tour with his band. Being originally from Ottawa, touring with his band introduced him to Toronto’s music scene — the central hub for the Canadian music industry. Gauthier explained that touring helped him get to where he is today, as a business owner.

“When I started playing in bands, I was like the business guy. I was the guy who would book the shows, that did all the promotion, that would organize everything,” he explained.

“I truly believe it teaches you how to run a business at a young age [sic]. You don’t realize it at the time, but it’s like, you’re settling money, you’re budgeting.” 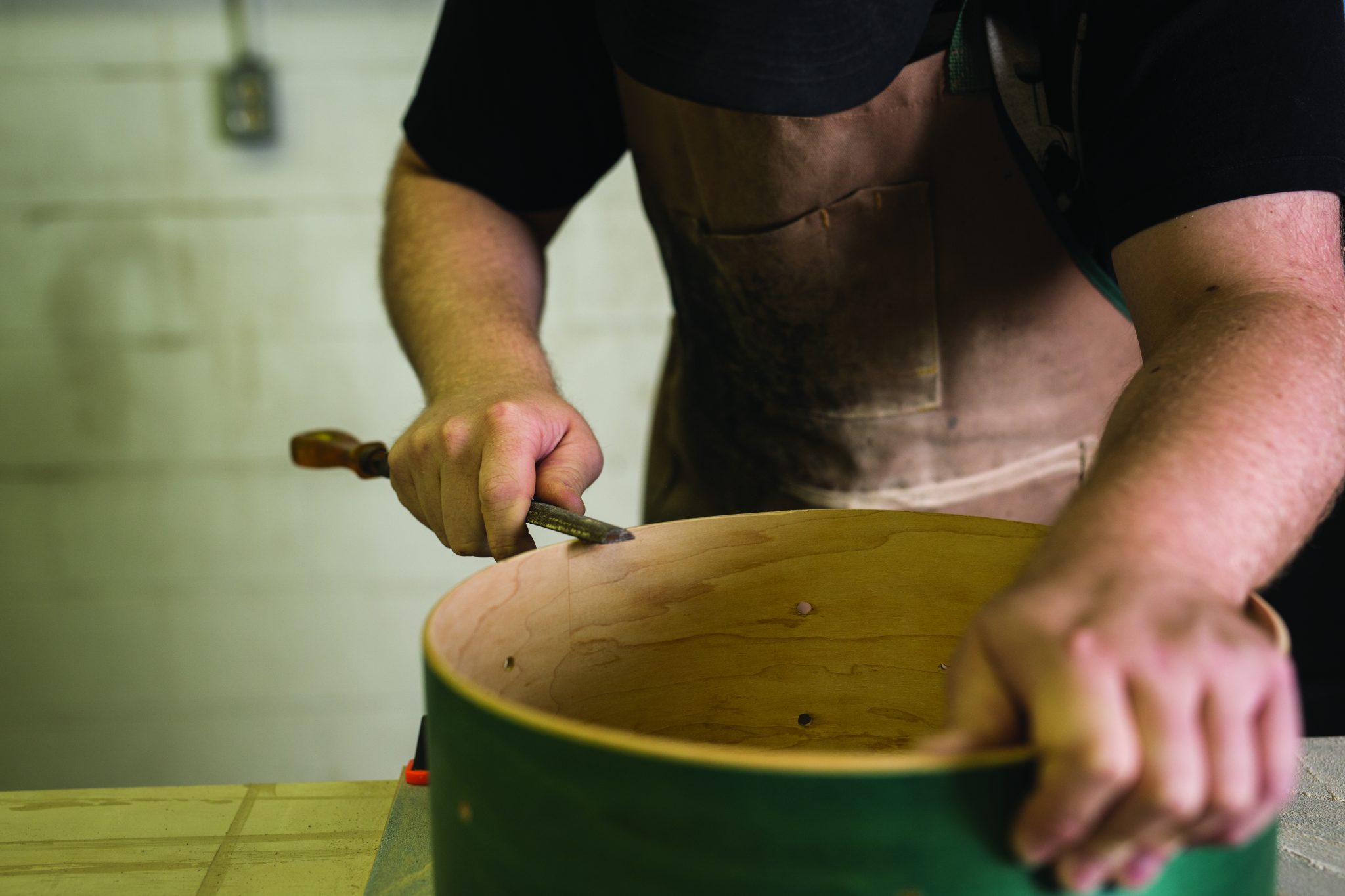 Just three years ago, Gauthier was still in Ottawa. He was travelling frequently to Toronto for work, while building drums in the basement of his rental house.

But, the travelling started to wear him out, both mentally and physically.

When a fellow musician told Gauthier that his dad had a

workshop rental space available in Waterloo, Gauthier had to go check it out. The unit, just off Northfield Drive, was the perfect size for building drums; it was also affordable and close to Toronto and London. The only other time Gauthier had been to Kitchener-Waterloo was for KOI Fest, but he decided to make the move.

Without a place to live, he packed up his things in Ottawa and moved to Waterloo, spending his first month sleeping on the floor of his workshop.

“I used my backpack as a pillow,” he said. “I had a towel that I put down on the ground to kind of soften it a little, and then I had one blanket, maybe.”

Eventually, he found an apartment in Kitchener.

Since moving to Waterloo, YC Drum Company — the “YC” being short for “Young Classics,” an homage to a Ten Second Epic song — has grown in a way that wouldn’t have been possible  had Gauthier continued his business in an Ottawa basement. He now has the space to service more clients and continue to grow.

Instead of going into a store, trying out different drum kits and saying “that’ll do,” Gauthier will select specific sizes of drums to build a kit that suits an individual drummer’s needs.

“There’s a million and one things that you can do to a drum, and it’s kind of knowing what to do to make a specific sound,” he said.

While Gauthier does have one part-time employee, there’s no middle man in his business. The drummers work directly with him, and he produces the product, with the exception of the shells, which are made by Keller, a company in New Hampshire.

Quality is obviously important to Gauthier. As mentioned earlier, “Young Classics” is a reference to a song — but it’s also a reference to Gauthier’s love for vintage drums. The problem is, vintage drums weren’t always built to last.  So while Gauthier’s drums often give a nod to vintage style and have the same warmth as an old kit, his kits are more reliable. Gauthier said he’s never had a drum kit returned because of quality issues. Because many of his clients are playing huge shows, like the Arkells who played Tim Horton’s Field in June, Gauthier’s product has to hold up.

Evidently, drummer Tim Oxford of the Arkells was one of Gauthier’s first big clients, bringing him on to work drum tech at an upcoming show when Gauthier was just 19 after Gauthier persistently offered his services, free of charge. 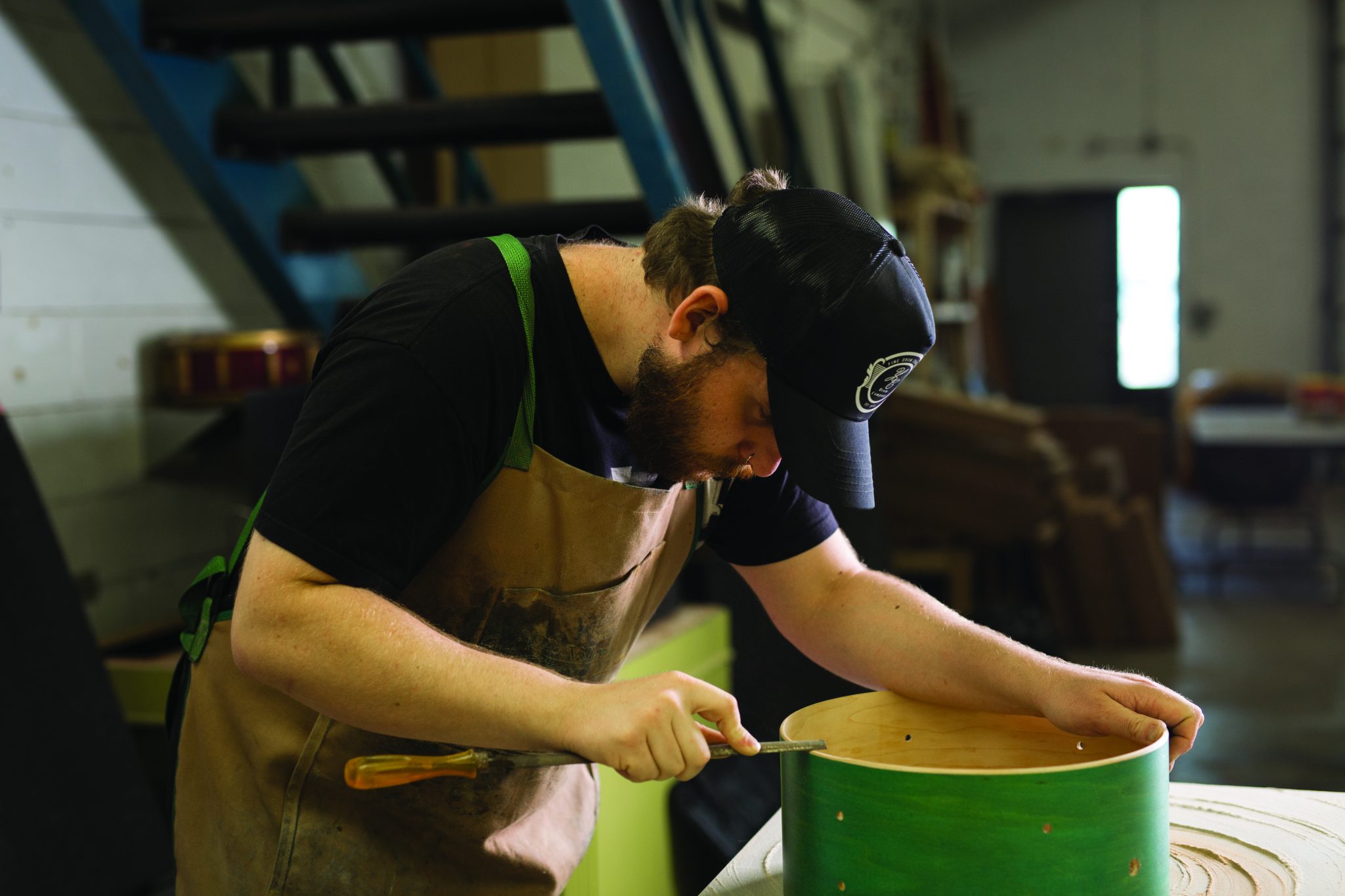 “The other dudes in Arkells had never met me before, and here’s [me] like running around the stage during the show like fixing things; I wasn’t getting paid, it was just funny. I was like 19, it was rad to me, it’s still rad to me,” Gauthier said.

“It’s been five years now, and [Tim] is kind of like an older brother to me. I’ve worked on the record that’s coming out in October, I worked on their last record, I’ve teched for them live a bunch, their whole band and management team has been really kind to me.”

But that wasn’t Gauthier’s only “big moment.” In 2017, The Strumbellas won the Juno for Single of the Year, which Gauthier was the drum tech on. Strumbellas drummer Jeremy Drury even brought Gauthier a Juno because he was involved in recording the track.

In such a short time, Gauthier has accomplished more than he ever thought he could.

“I didn’t know that five years ago, I would be here. So, I would hope that [in five years] it would be a little less hectic, in the sense of my workload,” he said, when thinking of the future.

“I would love to maybe, not work less hard, but have a bit less work on myself and maybe have some employees. But, I really just genuinely hope that this does not end.”