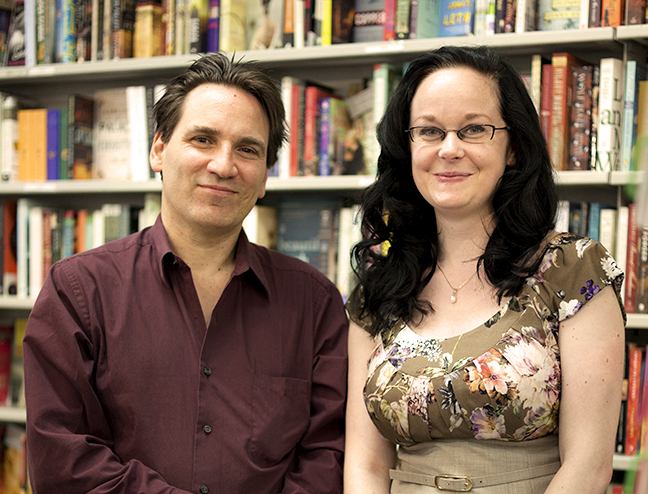 Turning 30 is always an eye-opener, but if you’re a business, it’s a whole other cup of tea. That’s why Word’s Worth Books is going all out for their 30-year anniversary event.

Planted snugly between William and Erb streets, this independent bookstore has seen a lot of changes in its 30 years.

Co-owner David Worsley is proud of Words Worth Books’ time as an independent literary business in the area.

“I think every business tries to tap into the ‘community’ angle, but chain stores are by definition beholden only to the head office. As there’s only one Words Worth Books, it means that the local populace and the local landscape are paramount in our thinking,” said Worsley.

In addition to relocating the store to a bigger location on King Street South in 2012, Words Worth Books has successfully undergone a change in ownership – another milestone few businesses have achieved.

In 2011, after running the store for 27 years, the original owners Tricia Siemens and Chuck Erion passed the literary beacon on to Worlsey and now co-owner Mandy Blouse, who were employees at the time.

Worsley credits the enduring success of the store to the strong foundation the original owners created.

“If there’s been growth and improvement, it’s entirely due to what they’ve taught us,” said Worsley.

Aside from business theory, Words Worth Books was one of the first to see the value and opportunity in the region at a time when few others did.

“Chuck and Tricia pioneered the whole notion of prominent Canadian authors coming to town in the first place back in the mid 1980s,” said Worsley.

Canadian author W.O. Mitchell, author of Who Has Seen the Wind, was the first to visit Words Worth Books. In later years heavy-weights like Robertson Davies, Margaret Atwood, John Irving, Rohinton Mistry and former Prime Minister Jean Chretien all visited the store.

In the early days, increasing the credibility of local arts and culture was not so high on the city’s to-do list.

“K-W was seen as infertile ground for something as cosmopolitan as a writer reading from his work to an interested party,” said Worsley.

Siemens and Erion helped to put local arts and culture on the radar.

“Publishers started to come to us with their spring and fall line-up and as such, K-W embraced the Words Worth reading series with more fervour every year,” said Worsley.

This type of forward thinking is what brought Words Worth Books to the position it holds in the local literary and publishing landscape today.

When Siemens and Erion retired, Worsley and Blouse did not try to revolutionize the business. Instead, they carried on with the wisdom passed on by their predecessors. The type of wisdom, they hope, that will keep them in business for another thirty years.

Words Worth Books celebrates their 30th anniversary May 10, 2014. The celebration features literary giveaways, 20 per cent off storewide and 30 per cent off select favourites from the last 30 years. In addition to the sale, World Fantasy Award for Best Novel winner Guy Gavriel Kay and Canada Reads winner Terry Fallis will be in attendance for readings and book signings.