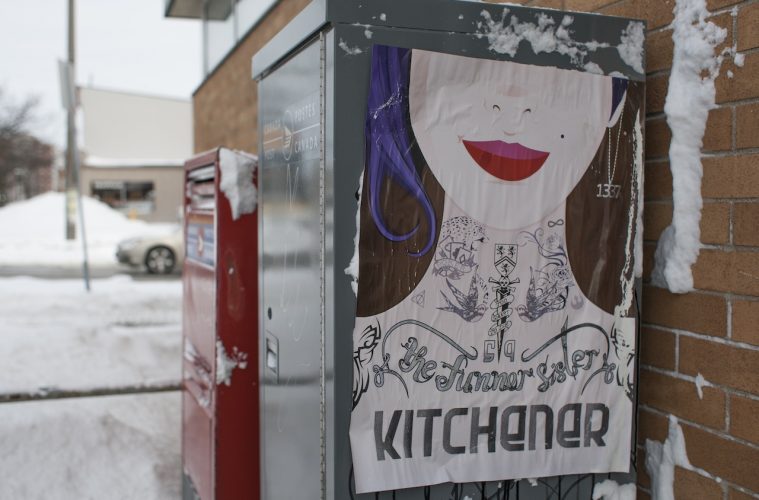 Who is that girl?

The most interesting art is shrouded in mystery, such as the true identity of Banksy, a popular United Kingdom-based graffiti artist, which has long been debated. In the past month, Kitchener-Waterloo has gained their own Banksy in a series of posters put up around the cities entitled “The Funner Sister.”

The poster in question, which can be found in multiple locations around Kitchener and Waterloo, features an illustration of a smirking girl with edgy purple hair and tattoos of various symbols, such as the University of Waterloo crest, with the words “The Funner Sister – Kitchener” emblazoned on her chest.

“The ultimate goal is to give people something to wonder about,” said the artist and creator of “The Funner Sister,” who wishes to remain anonymous. “Posters normally advertise things like a band [coming to town]. So when you walk through the city you kind of assume that’s what you’re looking at but then you look closer and you realize that it’s not.”

She wants to make the viewer pay attention and make them wonder about the purpose of the art.
“The goal is just that – to make a bit of a mystery.”

By putting the posters up around town, the artist is also trying to challenge common misconceptions of Kitchener, which typically gets a poor reputation throughout the town of Waterloo.

“I think it’s a great place to live and there’s so much going on. They have such a great energy and that wasn’t there like 10 years ago … it’s gone through so much change,” said the artist.

“When you look at the manufacturing history of Kitchener, and how many cool things have been made in the town – it’s neat to see all that stuff, and see what’s going on with the tech community.”

The artist, a recent transplant to Kitchener who has lived in both cities, finds that the “vibe” and reputation of the two cities are completely different.

“I feel like from talking to the people around town, that there wasn’t a great sense of identity or positivity around living in Kitchener,” she said. “There are so many amazing things going on and so many young people who are moving to the downtown core, that I just felt like it called for like some positivity. I wanted to give [the city] a positive identity.”

The artist recently put up another similarly styled poster in Uptown Waterloo depicting an old BlackBerry pager receiving an email with the lines, “The powerful play goes on, and you may contribute a verse,” which is a quote from the poem “O Me! O Life!” by Walt Whitman.

“The whole thing is a compliment,” said the artist on the lingering effects of the posters.

“I’m focusing on the positive and giving people a bit of inspiration. I know it’s graffiti and that people will eventually take them down but hopefully they get stolen and that people identify with them. I hope no one is mad.”

If you see a copy of the posters, be sure and share your photos with us by tweeting @CordCommunity. We’ve found one Waterloo poster at King and Willis Way but they seem to be rather elusive in comparison to their Kitchener twins.