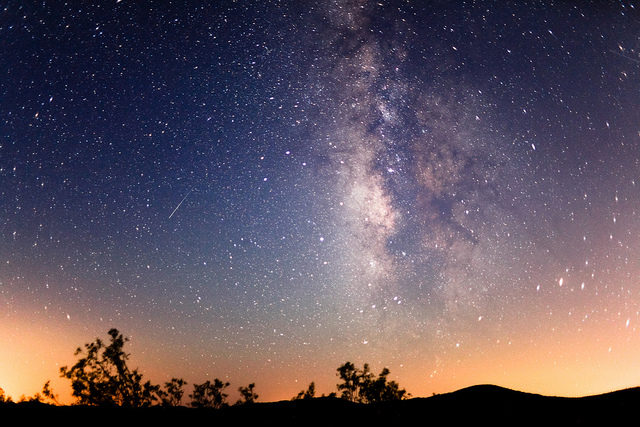 There are many reasons to look up this year, as well as some awesome space missions and space science anniversaries to celebrate. Here is a list of the most important astronomical events coming up—many of which are reasons to have a space party in 2014!

April 29: Annular Solar Eclipse. But you will only see it (safely with protection) if you are in Eastern Australia or Antarctica.

May 10: Saturn will be at its brightest. You will be able to see the rings and possibly a few moons with a medium or large telescope.

May 24: Possible Meteor storm. That’s right, not just a meteor shower; this is a potential storm of meteors that could be the most intense meteor display in the past ten years. This is still theoretical, but the math is telling us that there is a good chance that this will happen. Keep an eye on astronomy news closer to the date for confirmation.

June 7: Conjunction of the Moon and Mars. Both Mars and the Moon will appear in close proximity shortly after sunset in the Western sky.

July 20: This is the 45th anniversary of Apollo 11 landing on the Moon. Looking for a good theme party? There you go!

August: ESA’s probe Rosetta will finally catch up to comet 67-P/Churyumov-Gerasimenko, while it travels inside the orbit of Jupiter. Rosetta will be capturing some unique and detailed photos of the comet from close range while preparing to deploy a lander in November 2014.

August 10: Full Super Moon. This will be the closest that the Earth is to the Moon all year, but don’t be fooled by the media term “super.” The Moon will only appear marginally larger and brighter. Still, the Moon is awesome and this will be a great opportunity for lunar pictures after midnight. Brace yourself for exaggerated Facebook posts!

August 12, 13: Perseids Meteor shower. A fantastic annual meteor shower with an average of sixty meteors/hour. The Moon will be waning Gibbous which means it is just past full (more than half lit); this will affect the amount of meteors you’ll be able to see, but if the skies are clear, you should still be able to see quite a few with the naked eye after midnight.

October 8: Total Lunar Eclipse. If cloudy skies prevented you from seeing the lunar eclipse on April 15, this is your second chance to see the Moon go from dark to a rusty or blood red colour. Here is the observation map.

October 23: Partial Solar Eclipse. This one will be visible through most of North America. A partial eclipse is where the Moon shadows part of the sun. Here is more information. There should be some epic pictures from this event as the sun will look like a Cheshire cat’s grin.

November: ESA’s Rosetta will put its lander, called Philae, on the comet. This comet, (67-P/Churyumov-Gerasimenko) is only 4km (2.4 miles) in diameter. The lander will take pictures never before seen—from the surface of a comet!

December 13, 14: Geminids Meteor Shower. Astronomers consider this event to be the best meteor shower of the year, with an average of 120 meteors/hour. Radiating from the Gemini constellation, these multi-coloured meteors are a guaranteed (as long as it isn’t cloudy) to give a good show even with the waning gibbous moon’s light drowning out some of the meteors. Look up after midnight any night between December 7-17 to see this great show, with the peak happening the night of December 13.

For closer views of the planets, moon, star clusters, and other amazing astronomical entities, you can visit the Gustav Balkos Observatory at the University of Waterloo on the first Wednesday of every month (for free!). The Royal Astronomical Society of Canada Kitchener-Waterloo branch also holds star parties that are free for members and they often invite the public. They also hold monthly meetings discussing upcoming astronomical events.

To view the International Space Station, check the NASA tracker site or sign up for alerts. When you see the ISS, it will be as bright as the lights from an airplane and moving fast (it will go past in about 15 seconds). The difference between the light coming from a spacecraft and airplanes is that the lights on airplanes blink while the light from a spacecraft is solid and white because it is reflected sunlight rather than man made lights. The ISS orbits Earth approximately every 90 minutes and will be travelling west to east.

Charlotte Armstrong is a freelance space science journalist, the Outreach Coordinator for the Centre for Women in Science at Wilfrid Laurier University, the Regional Coordinator for The Planetary Society, local Yuri’s Night coordinator, and the coordinator of Nerd Nite Kitchener Waterloo.