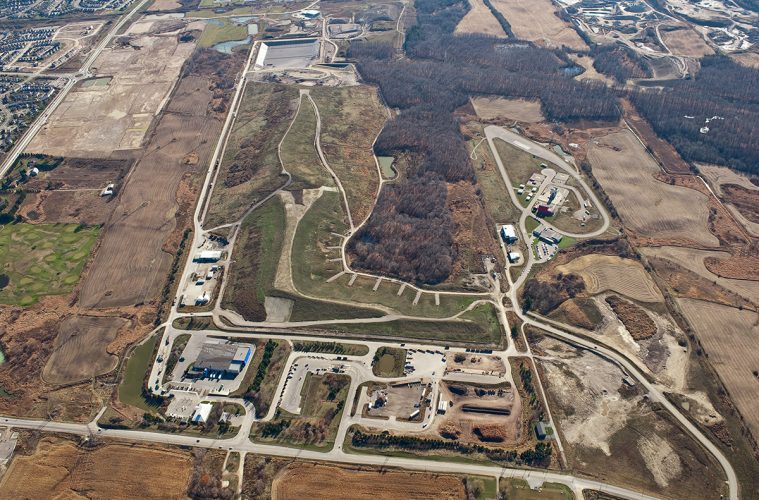 Waste not, want not

The site of Waterloo Region’s landfill. Its been under stress as the area population grows. – photo courtesy Region of Waterloo

The Region of Waterloo is conducting a major facelift of their waste management plan, a process that hasn’t been completed since 1986.

“We’re looking at the future of waste collection and diversion, what we’re picking up in front of people’s homes and what we’re doing with it, as well as what we’re doing with the left over garbage at the back end, so the disposal side of things,” explained Cari Howard, project manager for the Region’s waste management division.

The current landfill off of Erb Street in Waterloo is reaching capacity and is, according to Howard, going to close in about 20 years. Howard noted that it would have been closed by now if it wasn’t for the updates that were required to the plan every five years, such as the blue box and green bin programs.

“We’ve been saying that there has been 20 years left in the landfill for about the last 20 years. But through things like the blue box program and the green bin program we’ve been able to extend the life of the landfill,” she said.

To be proactive about the region’s new waste management master plan, the teams involved in constructing the new framework have gone to the public to look for input. Public consultations and online surveys — one of which just closed on Nov. 9 — have been conducted to allow residents to have their say.

“We started [the plan] in March of this year, and we’ll going to [regional] council with a recommendation in the fall of 2013,” continued Howard. “So what we’ve done so far is look at all the numbers so we know what we’re receiving from residents, what we’re receiving from commercial consumers. We’ve also looked at some of the population projections with our planning department for the Region of Waterloo.”

The recommendations that the teams come up with will be dissected by the regional council and they will choose what they want to have implemented. From there, the plan will be approved and waste management can move forward with their recommendations.

But the closure of the landfill isn’t the only concern when it comes to the new plan.

“The current waste plan is unsustainable,” said Matthew Day, program manager of the Regional Carbon Initiative at Sustainable Waterloo Region, who also sits on one of the two steering committees for the waste management master plan.

“There is an unlimited amount of waste that residents can put on the side of the road and that has to change.”

Both Howard and Day noted that initiatives such as garbage limits, bi-weekly garbage pick-ups and new waste disposal technologies have been discussed as potential recommendations for the new master plan. A new landfill site will have to be discussed as well.

“We’re looking at all those possible options, whether it’s trying to find another landfill, or building a piece of technology,” she added. “Some municipalities are working with different alternate technologies. The Region of Durham is in the process of just building an ‘energy –from-waste’ facility so they heat all the garbage that comes through.”

For Day, however, the plan needs more focus on smaller private businesses.

“One of the larger limitations with any regional master plan for waste is that it only controls and is only mandated to target residential waste,” he explained.

“Businesses don’t have the infrastructure to implement any of their recycling or compost plans.”

Businesses are generally forced to hire a recycling company, but if they don’t produce enough waste or they don’t have the funds to do so, they’ll throw recyclable materials such as cardboard and metals in the garbage.

According to Howard, reception of the ideas being thrown around for the new master plan has been “positive,” and they plan on hosting another public consultation in February or March 2013. The current landfill is undergoing plans to become “passive recreation,” and the forest nearby will grow onto the closed landfill.

“We haven’t made any decisions yet, [but] we’re really looking to get people’s thoughts and opinions,” Howard said.

For more information and ways to get involved, visit regionofwaterloo.ca/waste.