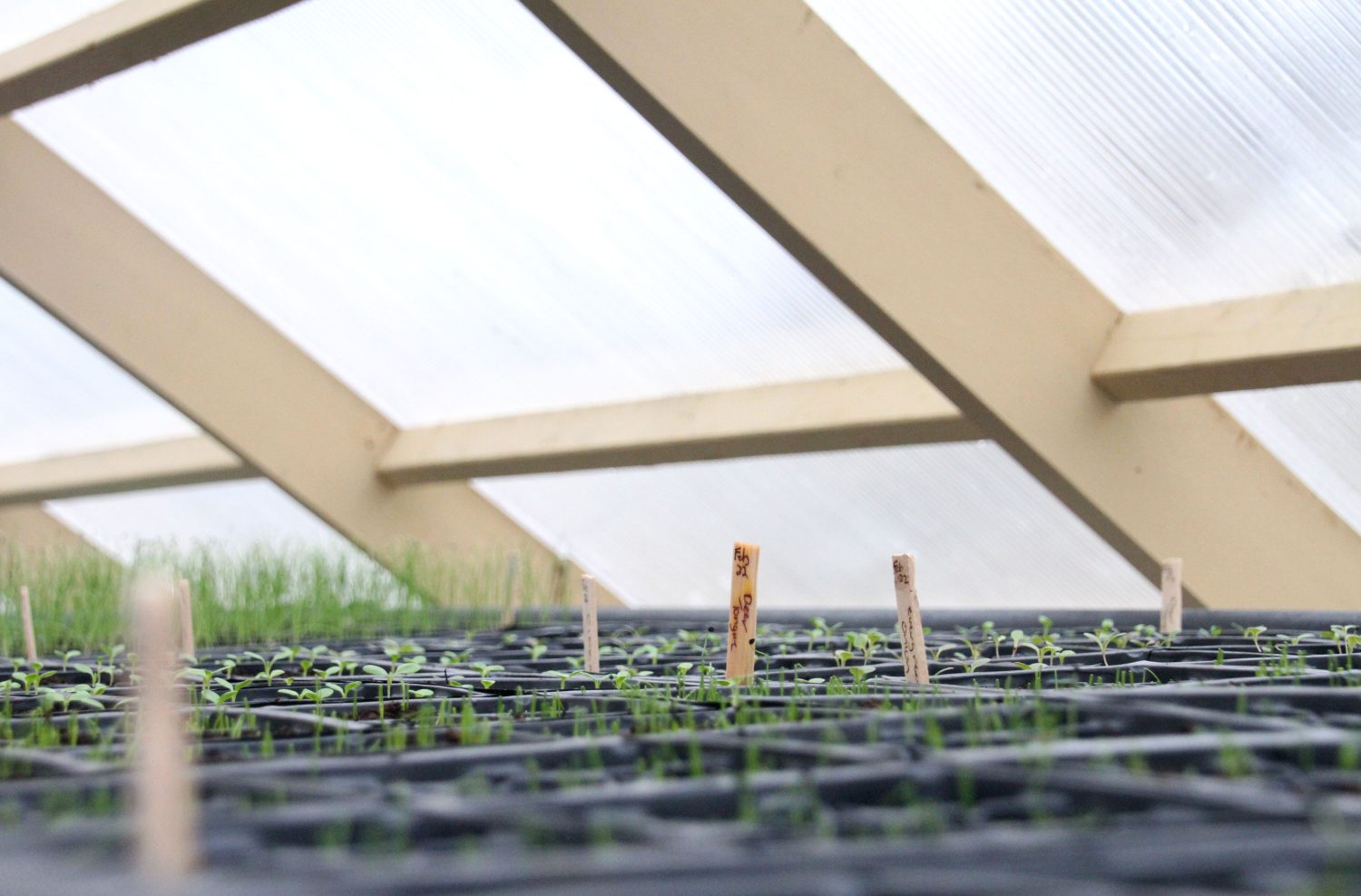 Community gardens and urban farms are becoming more popular. we go digging for the dirt on growing in the city.

March has begun, yet on a Wednesday in Kitchener, the ground is still covered in two feet of snow and there’s a distinct chill in the air. It’s hard to believe spring is just around the corner.

Inside the GROW gardens greenhouse, it’s another story. The small shed is awash in green thanks to a recent planting of microgreens and other produce that the market garden — funded and owned by The Working Centre — has been culti- vating throughout the winter. In here, it seems we’ve been transported about a month into spring.

Adam Kramer and Michele Sip are showing me around their little piece of bio-heaven. Both of them have worked here throughout the winter season. Kramer is the full-time staff person for GROW, as well as The Working Centre’s other agriculture project, Hacienda Sarria Market Garden, while Sip will return to Rockaway Gardens in the spring.

They point out a tub where fish will soon be living, and the flat full of pots of basil seeds waiting to sprout up. “Here,” says Kramer, passing me a handful of little plants he plucks straight out of a tray, “try these radish sprouts.” The leafy greens with long red stems don’t look much like radishes. I pop the plants into my mouth and suddenly my taste buds are overwhelmed and I get the feeling that my sinuses may spring out of my skull. These are some high quality microgreens, grown not far away from where people go to work every day.

It might be hard for some people to conceive of vegetable gardening as a trendy thing to do. But several generations are becoming more and more interested in what we eat and where it’s come from. Movements like Slow Food encourage people to eat only what’s local, and it’s not entirely uncommon to walk into a downtown apartment and find pots full of cooking herbs lining the window sill.

Kramer has definitely noticed the upsurge in gardening culture in K-W. “Even two years ago there were people doing great stuff,” he says. But in the last year, he points out that several new community gardens and farms have sprung up.

For some, the prospect of growing all the food that will end up on your table might seem a little daunting. But it’s not the challenge you might think. Greg Roberts and his partner, Karin, are the co-owners of Little City Farm, an urban homestead in the heart of down- town Kitchener. “We always thought we would move to the country and live our homestead dream,” he says. “But we never found property that suited us.” They realized that the property they owned was already big enough to support small- scale agriculture. Plus it was close to the culture and community that they wanted to be near.

Little City Farm goes beyond just farming. It’s also a bed and breakfast and a place where people can learn the tips and tricks to become independent growers themselves. Greg and Karin offer work- shops in everything you’d need to know to become self-sufficient, from seed starting, to soap and cheese making.

For them it’s not necessarily about making everyone become an urban homesteader. “I like the idea of cultivating ideas,” says Roberts. “It’s simply making others realize they can do it and are doing it by creating a few window boxes on their patio or growing sprouts in the winter. It’s meant to be achievable.”

The problem with people wanting to garden isn’t that there are too few; there are now so many, finding space to plant has become a challenge. Some gardens run by the municipalities have long waiting lists. The Queens Greens Community Garden, at the corner of Mill St. and Queen St. in Kitchener — which is also affiliated with the Working Centre — also has a long wait.

While there’s more space the further you go outside of the downtown core, for many the appeal is the ability to walk to where their own vegetables and fruits are growing. Unfortunately the number of gardens actually run by the municipalities is low in downtown areas.

Accessibility is also a challenge for people with mobility issues. Some gardens have implemented raised beds to address this, but the number of gardens that can be used by people with physical disabilities is still limited.

However, the tide is changing as the Region begins to see the value of urban agriculture. Carol Popovic is a Public Health nurse at the Region of Waterloo Public Health. When people can’t find a community garden to join, she looks for them or in some cases, gets them on the right track to start their own. “Younger people are getting involved and that’s exciting,” she says. “The older guard wants to pass the tricks of the trade down.”

Recent City of Waterloo bylaw changes mean that community gardens can be put up in any residential or business zone. In Kitchener, funding exists to support gardens that are built on city or private land. This has been good news for a lot of groups throughout the region. “Many of the faith organizations have gardens and the city is willing to provide them with some start-up funds,” says Popovic.

While it may be difficult to find plots run by the cities, there are gardens run by organizations including Urban Harvester, University of Waterloo and the Multicultural Centre. Services like a yard share also allow gardeners to borrow land from homeowners who may not be using their own backyards.

The Region is taking community gardening seriously as a viable way of keeping people healthy. “We’re not consuming the recommended level of vegetables and fruits that gives us the protective factor against cardiovascular disease,” says Popovic. “Anything that will provide a support to the community and encourage [people] to eat more of those foods that will prevent chronic disease, the better.”

Of course, there are other ways to eat local and healthy other than growing food yourself. At the Kitchener Market, local vendors can be found year round. “We have a couple [local community producers], and that’s just started in the last few years,” says Kim Feere, the interim manager of the Kitchener Market, who estimates they add about one or two new vendors from within the city each year.

Another option is buying into a CSA, short for Community Supported Agriculture. For your share, you get a box of veggies and fruits each week (the content will depend on what was ready to pick at the farm). Hacienda Sarria Market Garden is offering a CSA this year, a prospect Kramer is very excited about. It’s in keeping with the community centered philosophy that is behind both the GROW greenhouse and Hacienda. “It’s showing that you can live well with less,” says Kramer.

GROW and Hacienda represent another opportunity for K-W residents to literally get their hands dirty; both market gardens are always looking for volunteers.

In the end, what is it that drives the popularity of community gardening? Is it the chance to get healthy? Or a way of feeling connected to how our food grows?

Roberts thinks that the truth lies in the “community” part of community garden. “It’s some- thing other than email or smartphones,” he says, adding that he sees the social aspect come out in workshops at the Little City Farm. “It’s a place people want to connect with others.” It’s why gardens have always been attractive to people in the first place.