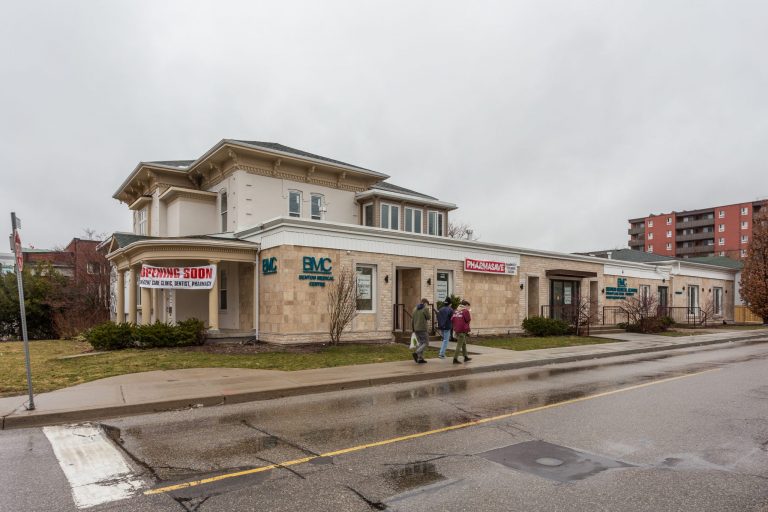 The Doctor is In, But We Could Use a Few More

Access to healthcare is fundamental for building healthy, livable communities. A physician who knows your history can mean the difference between detecting health issues early on or rushing to the emergency room. As Waterloo Region grows, demand for doctors has grown too.

The latest data from the Canadian Community Health Survey, collected in 2014, shows Waterloo Region has slightly better access to family doctors than the provincial average. But Kitchener, Cambridge, and parts of Waterloo are still listed as “areas of high physician need” by the Ministry of Health and Long Term Care. This designation takes into account the number of doctors per capita, and social factors specific to our community.

In other words, it’s a constant balancing act to provide enough health services for our rapidly growing, rapidly changing region.

I met Dr. Osama Hasan in a former funeral home on Benton St. in Kitchener, where he is in the midst of a major remodeling. The fresh drywall is pristine, white and clinical – a stark change, no doubt, from the sombre halls that formerly occupied this building, which will soon be turned into the Benton Medical Centre, a new urgent care clinic.

Dr. Hasan is an emergency room physician at the St. Mary’s and Grand River Hospitals. He says the new clinic is needed due to a lack of family doctors and crowded hospital waiting rooms.

To make the Benton Medical Centre a reality, Dr. Hasan has partnered with two other emergency room physicians, Dr. Falah Hafuth and Dr. Zad Jaber. They have grand plans for expanding beyond urgent care to include family doctors, a pharmacy, a dentist’s office and chiropractic services.

During the late 1990s and into the 2000s, the number of family doctors per capita flatlined across Ontario. But over the last 10 years, we’ve seen steady growth. While the Waterloo-Wellington Health Region still lags behind national and provincial averages, there are many people and organizations across Waterloo Region whose efforts are starting to pay off.

Donna Gravelle is the Physician Recruitment Coordinator for the Cambridge & North Dumfries Recruitment Committee, and on the front line of attracting new doctors to our region.

“Everybody was desperate for family doctors [in the early 2000s]. But we’re still actively recruiting every year, and that’s basically due to retirement and doctors moving. They used to stay and practice for 30 or 40 years, but now they’re a little more mobile, so that’s a bit of an issue,” she says.

Since 2012, Cambridge and North Dumfries has lost 26 doctors to retirement or relocation, but gained 33 new ones. The Greater KW Chamber of Commerce has operated a similar recruitment program for the rest of the Region, attracting 190 family physicians since 1998.

Recruiting doctors may seem an odd task for a business-focused organization, but access to health care is a major selling point for new employers to locate here. And the truth is, every doctor counts.

“If you have a physician retire, or even two retire and they haven’t found replacements, that can be 5,000 people without a doctor,” Gravelle says.

Downtown Kitchener’s Health Sciences Campus has also helped attract medical professionals to stay in the region. After millions of dollars in investment from provincial, regional and city governments, the campus opened in 2010. It now houses the University of Waterloo’s Schools of Pharmacy and Optometry and McMaster’s Michael G. DeGroote School of Medicine, which admits 28 undergraduate students per year.

Cathy Morris, regional assistant dean at the DeGroote School of Medicine, counts the region’s healthcare ecosystem, which also includes a nursing program at Conestoga College and Wilfrid Laurier University’s School of Social Work, as a big advantage over other mid-sized urban areas.

“Recruitment has been easier. [Students] have the opportunity to add this extra dimension to their practice that they wouldn’t otherwise have had,” she says.

Roughly 60 per cent of family medicine students go on to stay in Waterloo Region after graduating.

As Waterloo Region positions itself to retain more young doctors who are just starting their careers, Morris notes that the face of medical facilities is changing.

“The days of the sole practitioner in family medicine are quickly dwindling, because of these opportunities and the desire of graduates to work more in teams,” she says.

Outside of the traditional medical setting, you’ll find entrepreneurs like Chelsea Cybalski, the owner of a new health and wellness store called The Golden Mean in downtown Kitchener. She is offering more than just a retail service. If you walk past the shelves of supplements and natural beauty products, you’ll find offices for a naturopath and homeopath.

Alternative health practitioners are generally not covered by OHIP, so the influx of high-paying jobs to downtown Kitchener has helped build a customer base for Cybalski’s business.

“It was a good opportunity for us to enter the market, and the younger urban populations tend to be more open and accepting of alternative medicine. Also with the tech companies, Manulife and City Hall, they tend to have good private insurance,” she says.

Waterloo Region is pushing for more healthcare options on all fronts, rushing to fill different demands as more and more people call Waterloo Region home. Will it be enough to free us from the Province’s “high physician need” designation?