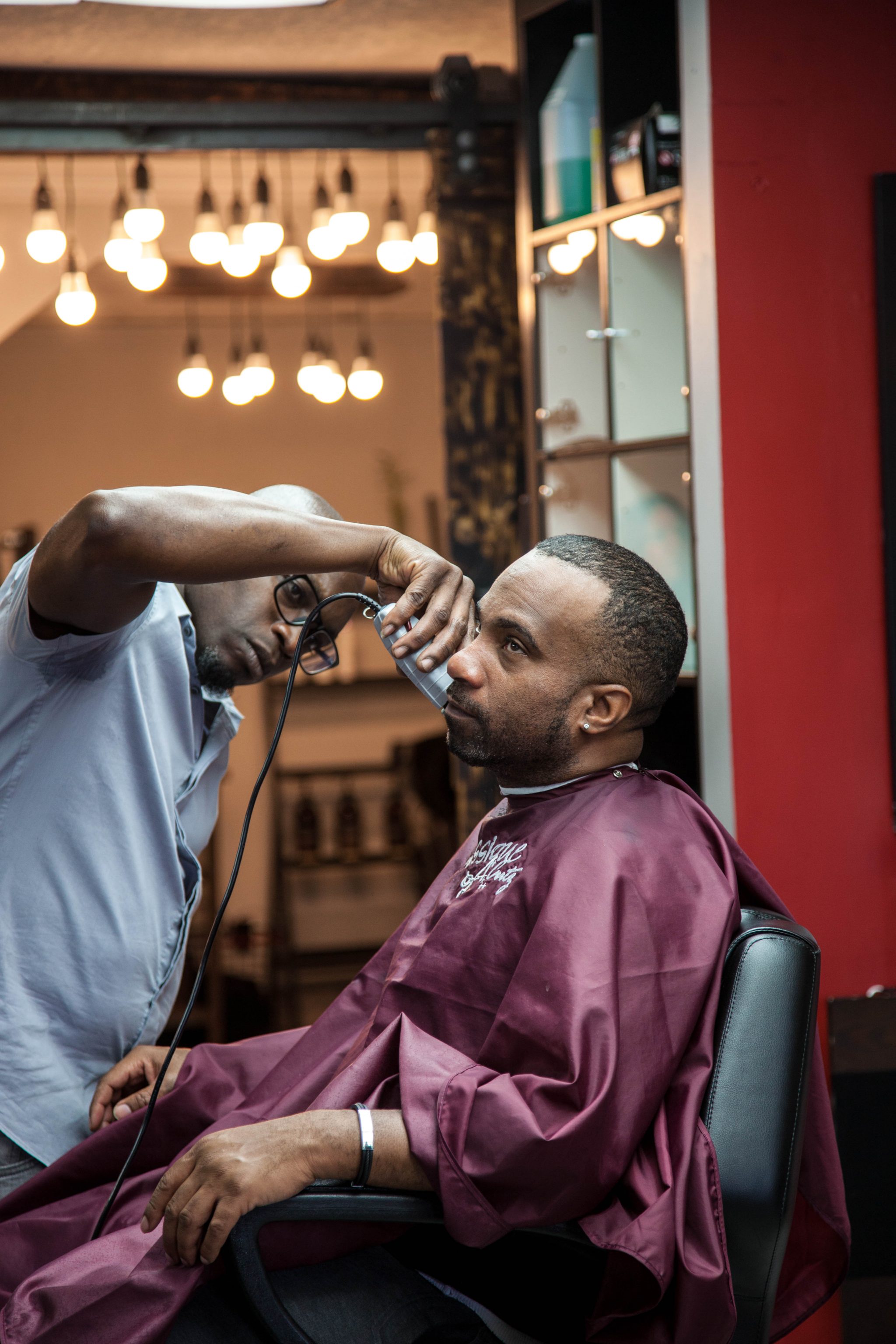 I have not always considered my Blackness to be beautiful. For years my brothers and I, the only Black males at a small Lutheran school, were the subject of our peers’ callous curiosity. I have visceral memories of schoolmates who, drawing from one-dimensional caricatures of Black people in popular media, would endlessly assert that we should walk, sound, and look a certain way. That included how we styled our hair.

Armed with images of the Fresh Prince, schoolmates would beg us to grow flattop fros, only to later pluck and tousle it without our permission. Torn between being annoyed and desperately wanting to fit in, for a time I preferred to keep my hair short and my head down. My bumpy journey of self love and affirmation was aided by family, friends, and role models. Outside of school I was encouraged, beyond a tokenistic appreciation, to take risks with my hair. My Black friends would show off intricate designs shaved in the sides of their hi-top fades, or tapers with sharp line-ups that punctuated their presence like an exclamation point. They all told me that I needed to see a barber to get my hair on point.

Barbershops are vital spaces for communities. To understand their importance, one might situate them within the German social critic Jürgen Habermas’ theory of the “public sphere” (or Öffentlichkeit), a democratic nexus in social life where people can come together to engage and connect with each other. The barbershop is ideally one such public sphere that is open to any person regardless of their demographic.

And so at age 12, with a hopeful bounce in my step, I strode into First Choice Haircutters at the Stanley Park Plaza, the closest barbershop within walking distance. My friends told me to ask for a line up, which is when the natural hairline is shaped into straight lines and sharp angles – a common Black hair style request and arguably the most straightforward. The silent response and bewildered expressions from the hair stylists were almost comical. Not one person there knew how to give me a line up. One patronizing, non-Black, middle-aged hair stylist told me she didn’t trust herself to cut Black hair in general. 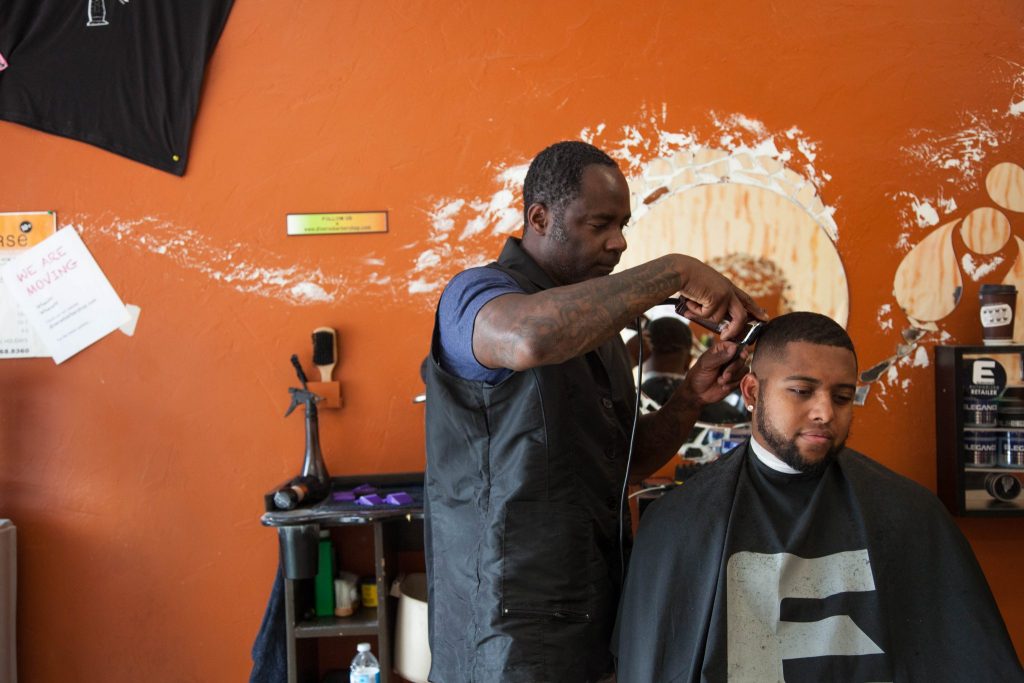 The run-of-the-mill barbershop could be considered part of the public sphere, but as author Melissa Victoria Harris-Lacewell points out in her book Barbershops, Bibles, and BET: Everyday Talk and Black Political Thought, the public sphere can sometimes exclude Black people, creating a need for “counterpublics.” The Black barbershop is a counterpublic space where Black men can get their hair cut. There are only a handful in our community. When I retrace my past, discovering all these spaces and connecting with the wider Black community, I remember the joy of finding Diverse Barbershop first.

Inside Diverse, located near the corner of Duke and Frederick streets in downtown Kitchener, I spoke with Kourey Proctor, a young Black man who moved to Waterloo Region from Mississauga two and a half years ago. He had an almost identical experience to me.

“[I] went to First Choice for a line up one time, and they couldn’t do it. They told me that I should go to Diverse if I wanted that,” Proctor said. An older gentleman who overheard us chipped in and said that Proctor got some damn good advice, which drew big laughs from everyone present.

There are no appointments at Diverse, you just walk-in as early as possible and try to find a seat. Thursday and Saturday are high times, and although the wait can sometimes last up to two hours, there is no doubt that this is part of the experience. Deep hip hop cuts blend into Afro house and jazz fusion beats. Absent minded heads bob to the rhythms, feet tap and shuffle. Others dive into lively conversations and arguments spanning every topic, like the never ending debate of who the top five are in any sport, or how rapidly our city is changing. 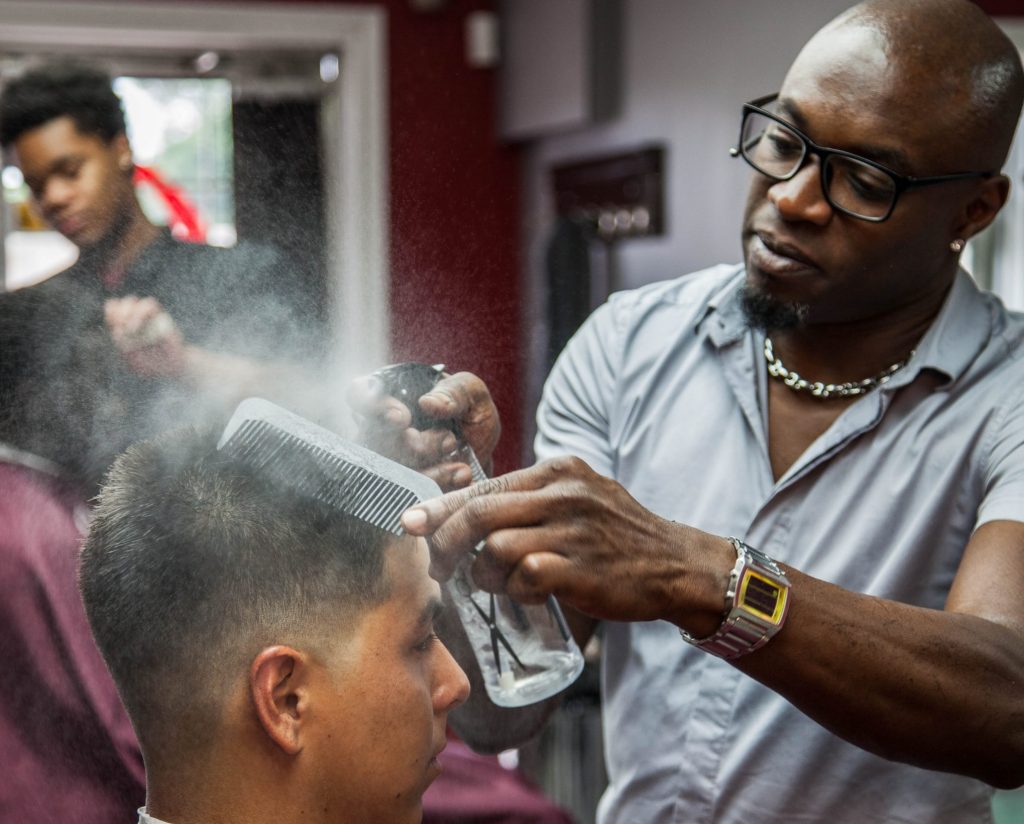 As a kid I was totally in awe. Sitting in that room, I used to close my eyes, absorbing the sounds and smells. It became my oasis. It was the first time, outside of family gatherings, where I saw Black males communicate freely, and it was profoundly refreshing. As an adult I find it has remained as vibrant and important as ever.

The business was started by Keven Francis who has been cutting hair for over 23 years, and has been my main barber for over a decade. He opened the doors of Diverse in 2002 and works alongside fellow barbers Essan Howell and Dave Henry, both of whom are also held in high regard by their loyal customers.

On the issue of barbers not knowing how to cut Black hair, Francis sees it as more of an educational limitation. “It’s not in the provincial curriculum,” he said, “so many hair stylists and barbers never learn how to cut with clippers.”

To help hair professionals develop what he calls the “urban eye,” Keven has created Diverse Teach, a program designed for professionals in the industry who want to improve in the area of clippers and trimmers, filling a very important knowledge gap. To date, he estimates that he has trained more than 35 professionals on how to perform techniques that used to exist purely in Black hair shops. 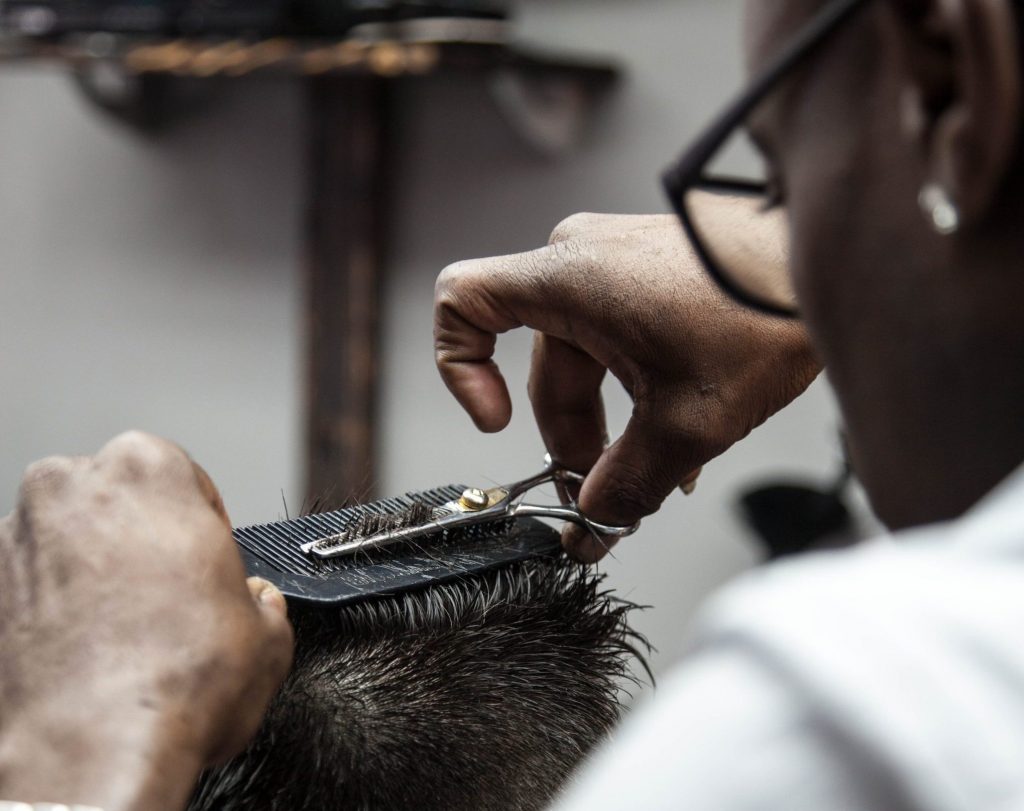 The work of Quincy T. Mills and Douglas W. Bristol Jr. sheds important light on the history of Black-owned barbershops in North America, and how they are tied to the history of slavery. Many Black barbers were freed men who were given an unprecedented (albeit temporary) amount of power over white clients while they sat in their chairs. The Black middle class was built up in racially segregated localities due to the leadership and business acumen of successful Black barbers who advocated for economic independence from whites.

In the 1880s and 1890s, after emancipation, a younger generation entered barbering to open shops in Black communities. These barbershops were described as the “Black man’s sanctuary” by civil rights figures such as Ralph Ellison, Toni Morrison, Amiri Baraka and Richard Wright. In Canada, the first Black barbershops opened in Toronto and have since inspired hundreds of Black entrepreneurs to open their own shops across the country. Instead of forced servitude, they transformed into counterpublics where Black men could not only get a shave and a haircut, but also let down their guards and converse without fear.

According to The Canadian Encyclopedia, in his younger days the noted social development and human rights advocate Dr. Calvin W. Ruck quietly resisted one white-owned barbershop in Nova Scotia that would not serve his family or the Black community. As he sat in the shop waiting for service, white patrons would not come in, which affected the barber’s income. He later filed a complaint with Human Rights Commission which garnered a lot of support from all across Canada. 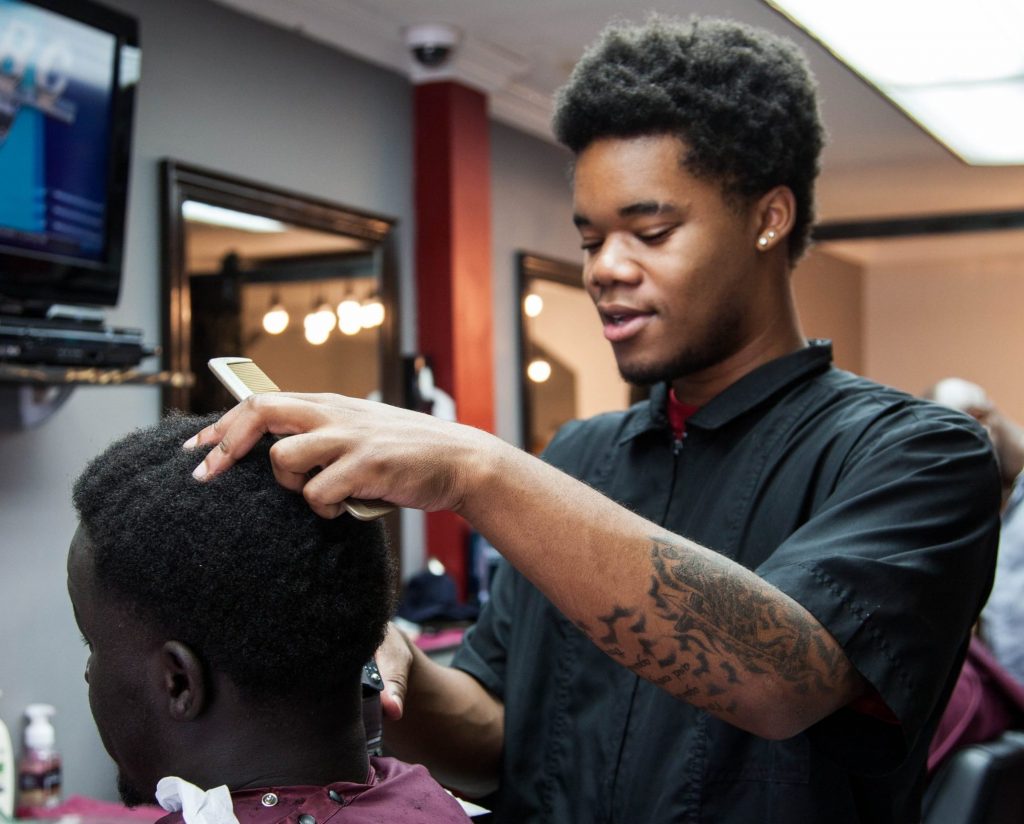 The relationship between clients and barbers can span several generations. Dermott Smith, a long time Diverse customer, said Francis has been his go-to for years. “I’ve been coming here since he opened. Now when I come here I bring my five-year-old and two-year-old with me.”

Black men put a lot of trust in their barbers to not only get the fade right or the line up perfect, but also to help guide them through the aging process. Smith rubs his head and laughs good naturedly as he reveals how important Keven has been for him personally. “He helped me transition from having hair to no hair.” It’s hard to imagine this kind of candid vulnerability and shared male intimacy occurring outside the walls of the barbershop.

In high school I searched for other places like Diverse and discovered other Black barbershops in Kitchener. However, as I grew older I also began to identify a less pleasant side of some of the places I revered. Homophobic and transphobic comments, the objectification of women, and a posturing of hardness in some of these spaces rubbed off on me when I was younger. I thought I needed to emulate this to affirm my Blackness, and subsequently needed to unlearn this in my adulthood.

There are a lot of reasons as to why Black men project hyper-masculinity; it is a response to a repressive society, and also a racist stereotype meant to restrict Black men. Because Black barbershops are protected spaces, conversations can easily veer into problematic territory with no form of accountability. The toxic rules for being a Black male were perpetuated in some barbershops, and it limited certain expressions of my own identity. 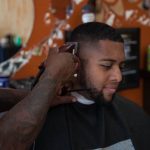 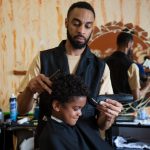 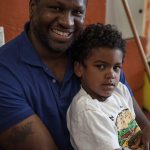 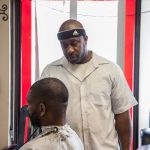 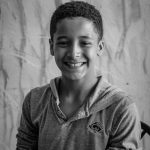 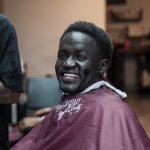 Even as I am more critical of these men and spaces, there is still an undeniable influence that lingers with me. Childish Gambino accurately sums up my struggle for validation and feelings of alienation in his line “culture shock in barbershops, cause I ain’t hood enough. We all look the same to the cops, ain’t that good enough?”

This is not reflective of every barbershop in the region. I’ve worked with youth in community-based settings for a decade, long enough for them to see me age and then joke about my own receding hairline. Four years ago I picked up wind of another Black-owned barbershop that the kids were going to. This led me to Classique Cutz, located on Kingsway Drive between 3rd and 4th Avenue in Kitchener.

Winton McKenzie has been running this shop for 13 years — he grew up in Toronto and has been in Kitchener since the early 2000s. When I shared my ambivalence around certain Black barbershops, he assured me that Classique was not that kind of place. “This is a family friendly zone,” he said. “I don’t allow cursing or negative talk here.” Unlike other Black barbershops, haircuts here are strictly by appointment only. “It helps me control the overload and it keeps people happy.”

Something else that makes Classique unique is Winton’s approach to hiring and training barbers. He interacts with a lot of youth who start as customers and offers mentoring to the ones who are interested in getting into barbering. Malik Farquharson was one of these youth who started by cleaning up around the shop and is now one of Winton’s most sought after barbers. By mentoring and empowering youth, Winton carries on a positive and long tradition of Black barbershops uplifting the Black community.

Being critical of the role barbershops have played in my life has allowed me to recognize their wider impact in our region. These counterpublics for Black men are important to preserve because, unlike Toronto, there are only a handful in our community.

And it is not only Black men who need these shops. I see people of all ethnicities, with a wide range of hair types and style requests, waiting for a chop at Diverse or Classique Cutz. Everyone is always welcome, and long time customers appreciate the shops as safe spaces to air out societal and community issues that matter to them.

This month Diverse is moving from it’s location in the downtown core because the building they were in has been sold to developers. This is of course not the end, because wherever Diverse goes, their loyal customers and the Black community will most certainly follow. 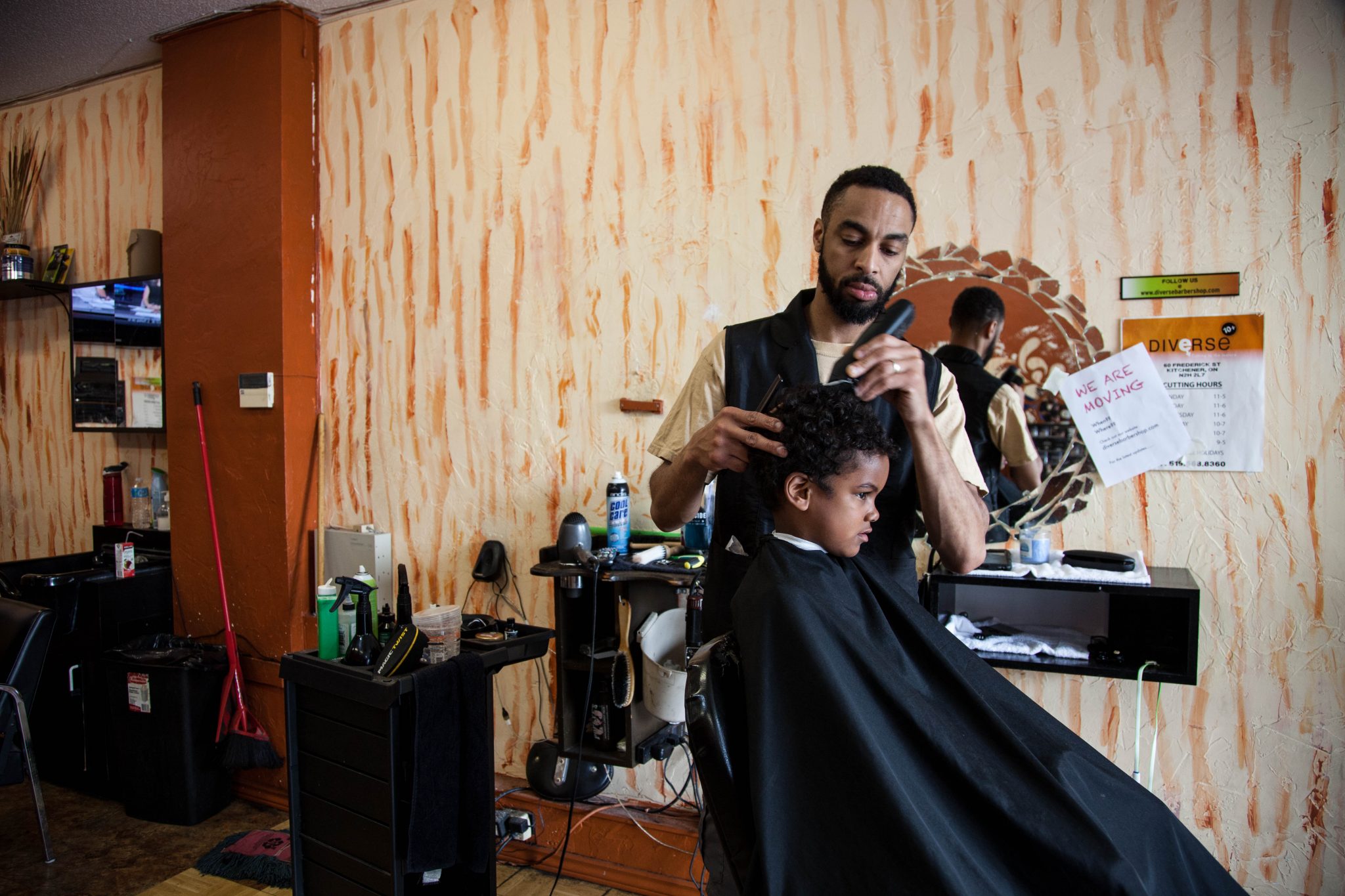